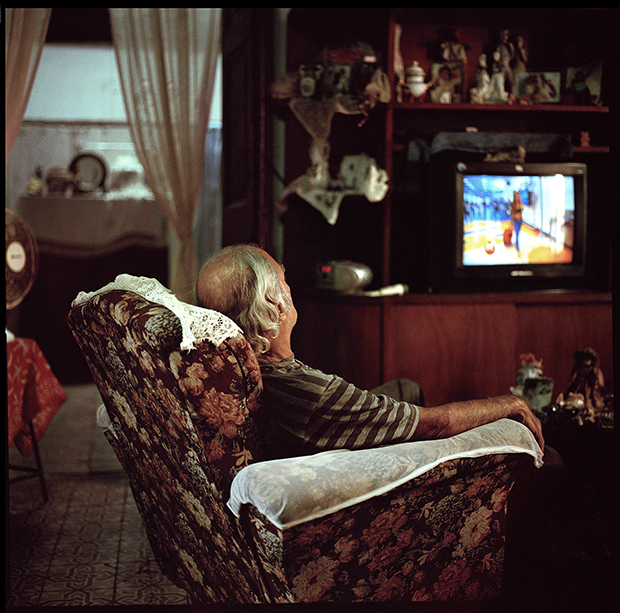 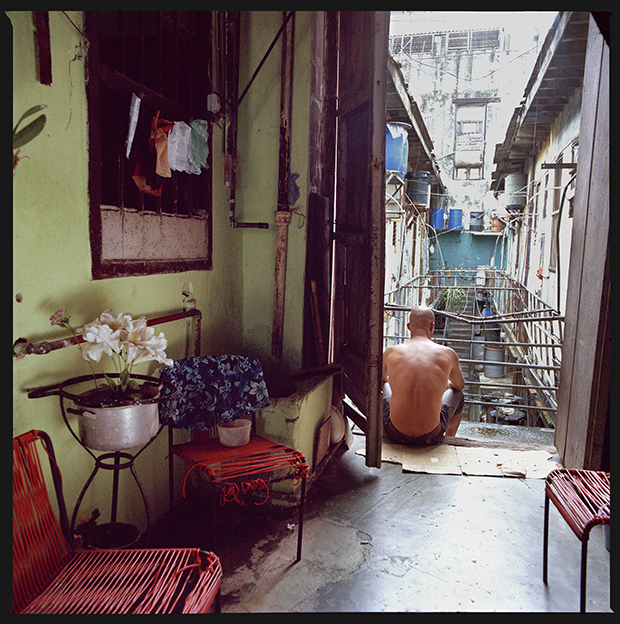 New York-based Italian photographer Carolina Sandretto first travelled to Cuba in 2011; the country fascinated Carolina, as did the “time bubble which entraps it” and the strangely familiar culture she encountered there. The photographer started shooting Vivir Con in 2013, a project which stemmed from a personal exigency to describe what it means to live in Cuba, both in cultural and geographical terms. Due to a lack of means and permits to build new homes, the majority of the Cuban population live in “solars”: a solar is a building that was originally designed to be lived in by only one family, but has been transformed into a multi-family “coop” due to the increase in population and lack of space. Carolina elaborates: “One family often resides in one small room where all family members eat and sleep, from the grandparents to the nephews”. Vivir Con gives us a glimpse into what family life is like in a small space in a tropical country, while examining the tensions between neighboring families who are forced to co-exist.

The overcrowded tenement buildings depicted by Carolina serve as a dramatic reminder of Cuba’s severe housing shortage, and pose a stark contrast to the more colorful depiction of the country which is better known for its musical and literary inspiration. According to IPS News, “one-quarter of the buildings in Old Havana are tenement houses, which are home to 41.5 percent of the total population of this historic district”. In recognition of Cuba’s housing crisis, back in 2005 President Castro announced plans to renovate existing buildings which are currently not fit for human inhabitance and construct new ones. Ten years on, co-existence in a solar is still a reality for many Cubans. 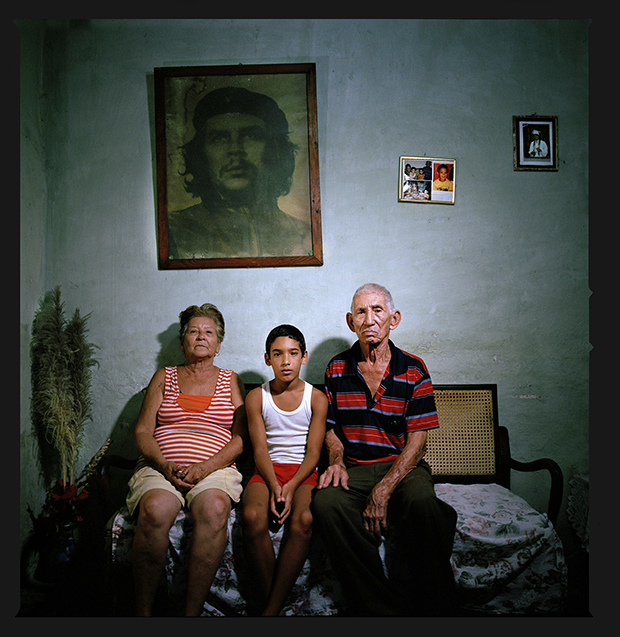 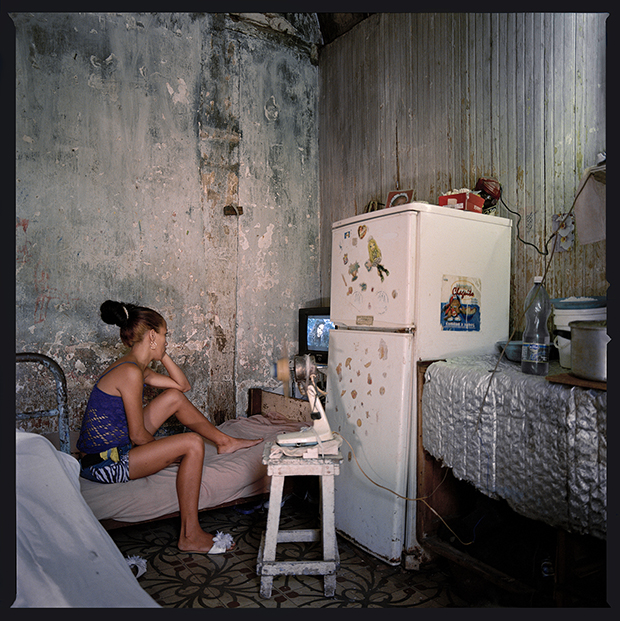 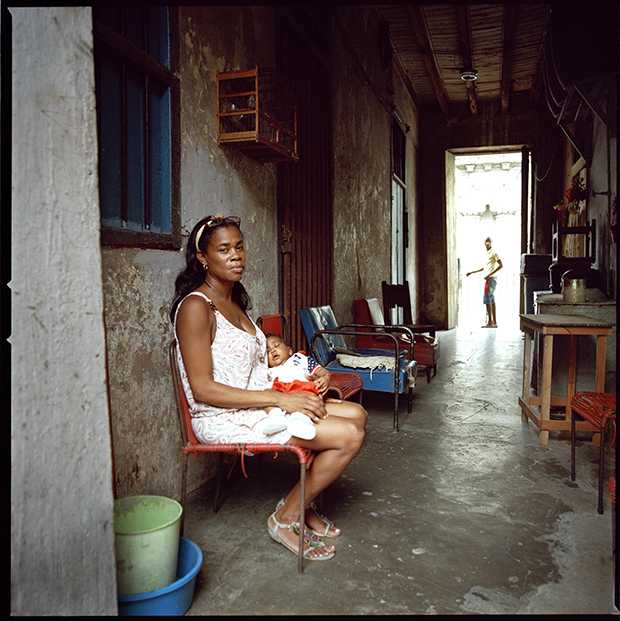 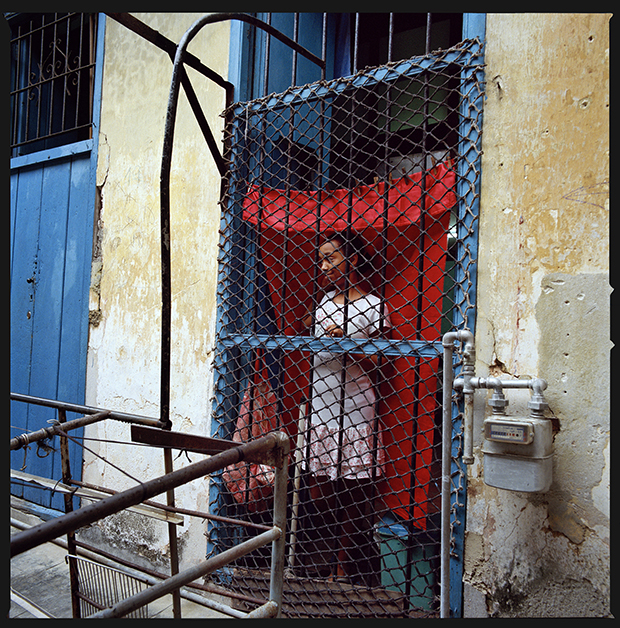 When and why were you inspired to create this project?
“I first travelled to Cuba in 2011 to follow my mentor at the time photographer Nevada Wier on her first trip to the Island. The country fascinated me as did the time bubble it’s trapped into and by it’s very familiar and at the same time peculiar culture. I started Vivir Con in 2013 from my need to describe what it means to live in Cuba. Not only culturally but geographically. I wanted to describe the Cuban Habitat.

The Cuban population mainly lives in “Solars”. A solar is a building that used to house only one family and that has been transformed into a multi-family “coop” due to the increase of the population and the lack of space. One family often gets only one tiny room where all the family members lives eats and sleeps from the grandparents to the nephews. The Solar phenomenon is mainly due to the lack of means and permits to build new homes. When a family lives together in a small place in a tropical climate it creates all sort of tensions between people. The other aspect I was interested in was life in the Solar itself. The social experiment of living together sometimes is very hard to get used to. Often neighbors don’t have a good relationship and they do have an obligation to coexist. Finally, in all these very small apartments people try to fit most of their prized possessions, among which are armchairs and radios from the 1940’s.

There are three layers to the life in Cuban homes that I wanted to explore in Vivir Con. One is to do with the families themselves, another examining the tensions between the families and the last is about individuals and their prized possessions.” 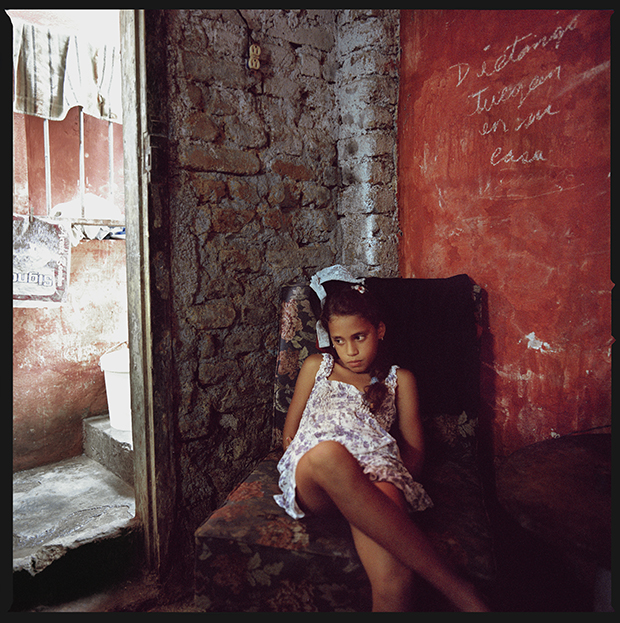 Did you have a specific narrative in mind for Vivir Con?
“As a documentary photographer I’m always neutral with regards to what I see. I allow the people I photograph the freedom to convey what they feel like. It is not my role to make a judgment. I just wanted to see what it was like to live in a Cuban solar today.” 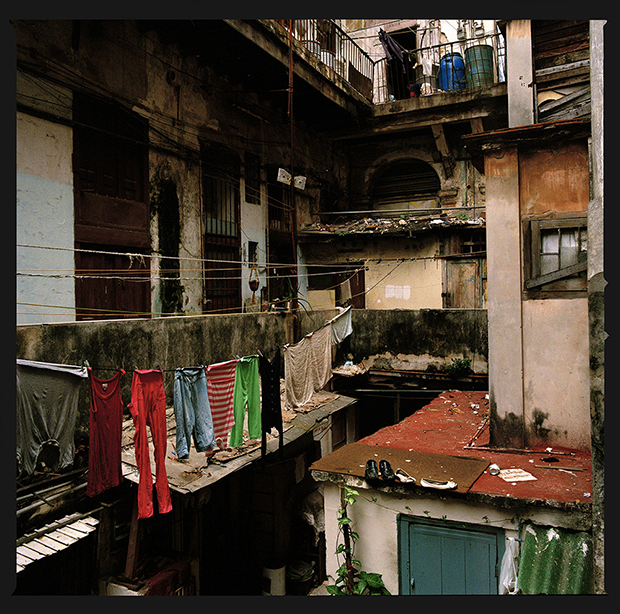 Can you briefly run us through process involved in creating these images?
“Vivir Con is a project I decided to photograph with a medium format Hasselblad from the 1950s. As life is extremely difficult in Cuba I always felt like using my digital camera was like taking a shortcut. I wanted my work to be as difficult as the life of the people I photographed. An analogue camera was the best option. I have to wait to see the result of my work, I live in the uncertainty of the work I did. It is also a camera that slows the process down when I photograph, and this allows me to talk to my subjects more and get to know them better. As a portrait photographer I find this useful as people are more confident and relaxed after talking a bit. Finally I need time, and in Cuba time is very slow. The camera puts me on the same schedule as the Island is and this is a great help for me!

To get access I very simply knocked on doors and explained what I was doing and why. Cubans are very open to being photographed and telling their stories. But some of them are still afraid of the consequences of talking with a foreigner.” 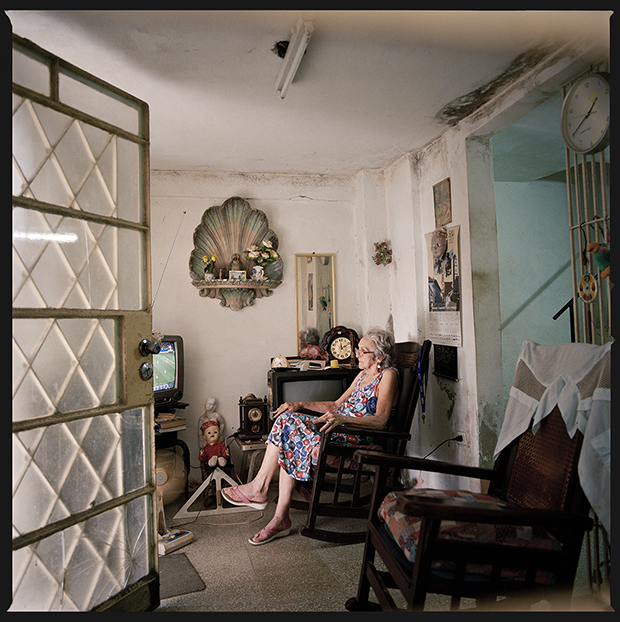