Past and Present Collide in Magical Exploration of Paris 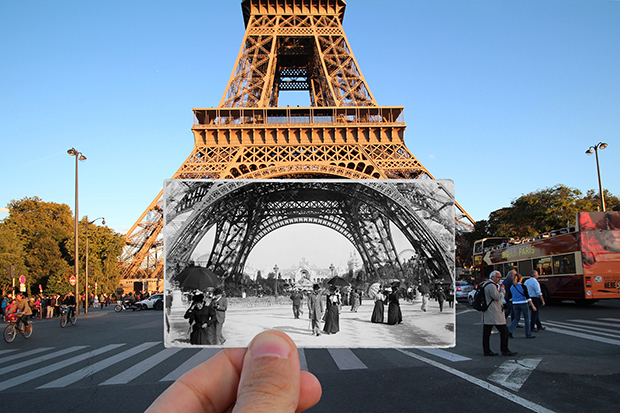 Tour Eiffel. 1900. These strollers were undoubtedly visitors of the Universal Exposition, of which two attractions can be distinguished: between the legs of the Eiffel Tower, the Palace of Electricity, and on the right, the Ferris wheel on Avenue de Suffirent. ©RMN-Grand Palais (MuCEM)/Franck Raux 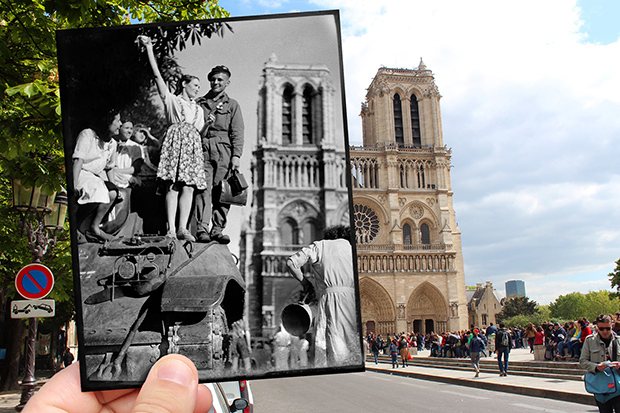 “You can’t escape the past in Paris,” American Beat poet Allen Ginsberg famously said of the city during his travels in 1958, “and yet what’s so wonderful about it is that the past and present intermingle so intangibly that it doesn’t seem to burden.”

As an American looking in on the work of French photographer Julien Knez, that decades-old sentiment emerges time and again. In collaboration with Parigramme, the artist has combed through the photographic archives nearly a century. He was given free reign to explore the publisher’s vault for images made between 1871, the year of The Paris Commune and The Bloody Week, and 1968, when the country teetered on the brink of another revolution.

Knez plays the part of the time traveler, revisiting the exact sites of each photograph before merging it with the surrounding scenery. He stands at the exact spot and holds up the print in his own hands. He shoots more than one frame, and all the edges are perfectly aligned to match in post-production.

The artist began the project in 2014 to commemorate the 70th anniversary of The Battle of Paris, and indeed, the memory of Hitler’s footsteps and the clamor of liberation lie like fossils beneath the stairs at the Place de l’Opéra and the walkway to Notre Dame.

Knez describes the original, older photographs as “windows” to somewhere else, suggesting that they are not simply pasted along the surface of modern-day life. Instead, it is the present day that has been pulled back like a curtain, revealing all that came before in black and white. 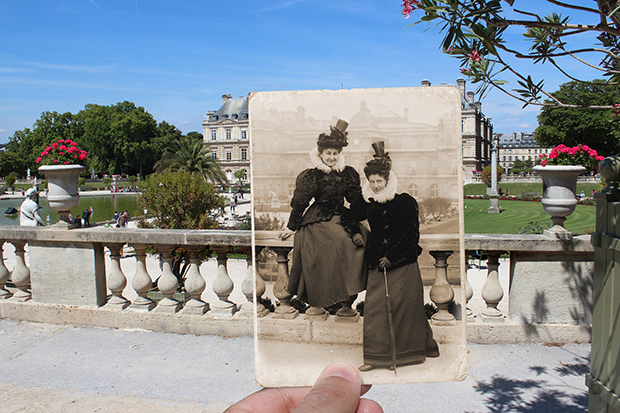 Jardin du Luxembourg. 1895. These elegant ladies at the Jardin du Luxembourg were at the forefront of fashion. It was rare in 1895 for women’s wear to be presented outdoors rather than in workshops. Coco Chanel would later revolutionize fashion, but this was still several years away. © Ernest Roger/Roger-Viollet 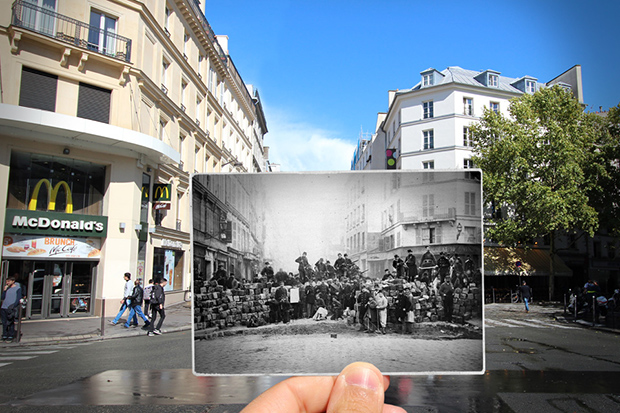 Rue du Faubourg-du-Temple. 1871. Barricade at the entrance of the Faubourg du Temple. This would be one of the last Commune barricades to fall, on May 28, 1871, when rebels were pushed into the tight quadrilateral formed by the Rue du Faubourg-du-Temple, Rue Saint-Maur, Rue Oberkampf and Boulevard de Belleville. © Adolphe Eugène Disdéri/Akg-images 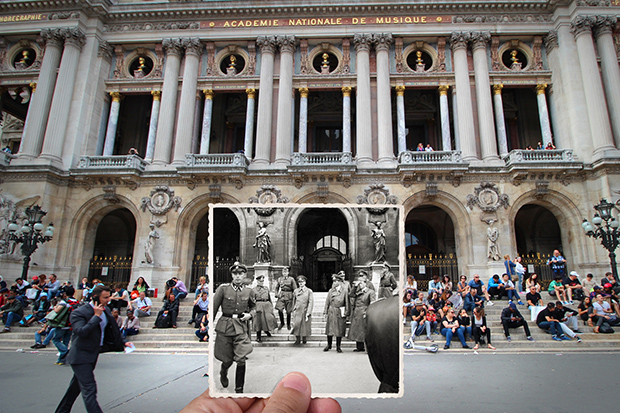 Place de l’Opéra. Juin 1940. On the day after the Armistice establishing German occupation of part of France, Hitler made a lightning trip to Paris on June 23, 1940. Between six and eight in the morning, the Führer made a landlord’s tour as well as a touristic visit, hurriedly taking in Notre-Dame, the Louvre, the Invalides, the Arc de Triomphe, the Trocadéro esplanade… and here, the Opéra. © Suddeutsche Zeitung/Rue des Archives 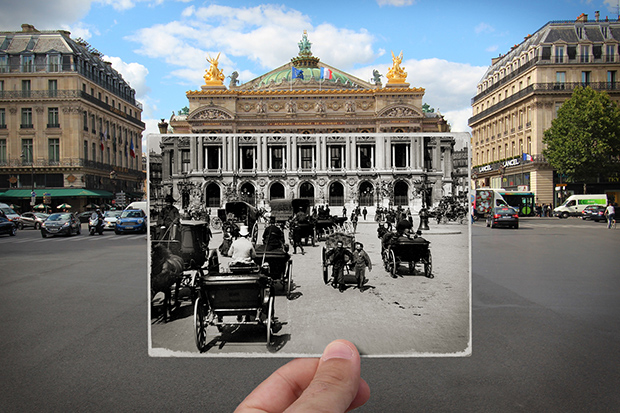 Place de l’Opéra. 1900. In front of the Napoléon III pomp of the Palais Garnier stands the Place de l’Opéra, in 1900 not yet fitted with its present-day median strip and métro exit. ©Léon et Lévy/Roger-Viollet 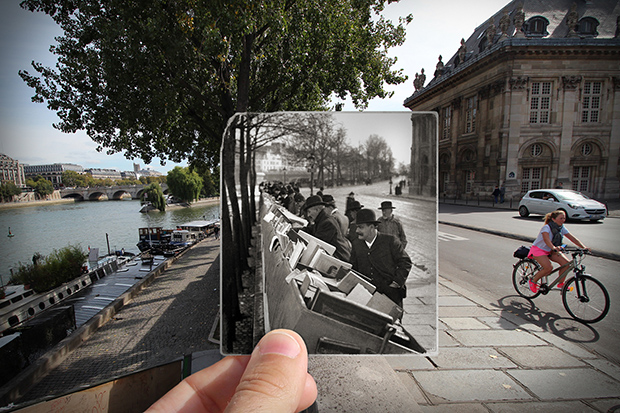 Quai de Conti. 1900. In front of the Institute, lovers of literature would rush to the stands of booksellers. ©Neurdein/Roger-Viollet 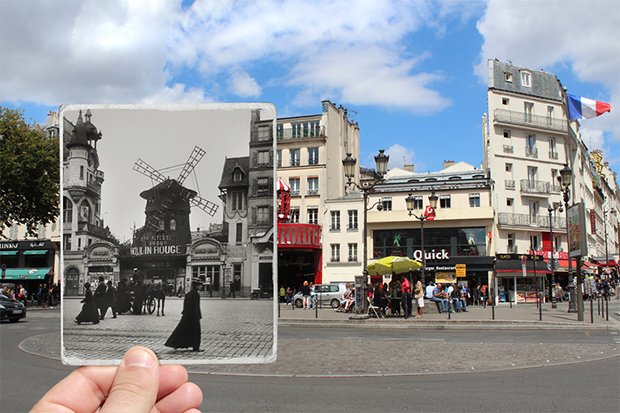 Boulevard de Clichy. 1900. The Moulin Rouge, seen from the Place Blanche, in 1900. The venue opened its doors eleven years earlier and met with success very quickly, drawing clients from all backgrounds and taking advantage of the influx of visitors to the Universal Exhibitions from the French provinces or from overseas. Amongst the cabaret’s various attractions, the French cancan was an especial crowd pleaser, eternally linked with the names of stars such as La Goulue, Nini Pattes-en-l’Air, Grille d’Égout or La Môme Fromage. ©Keystone-France 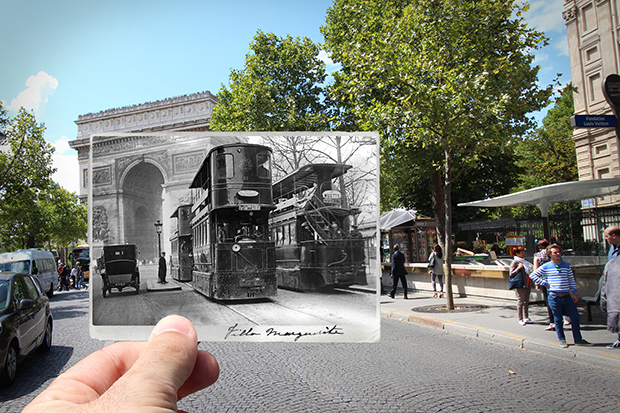 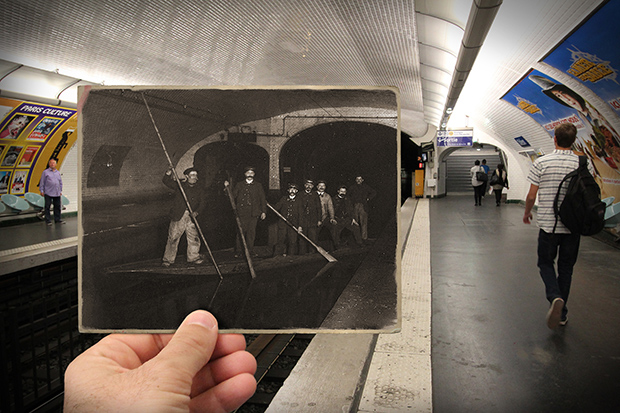 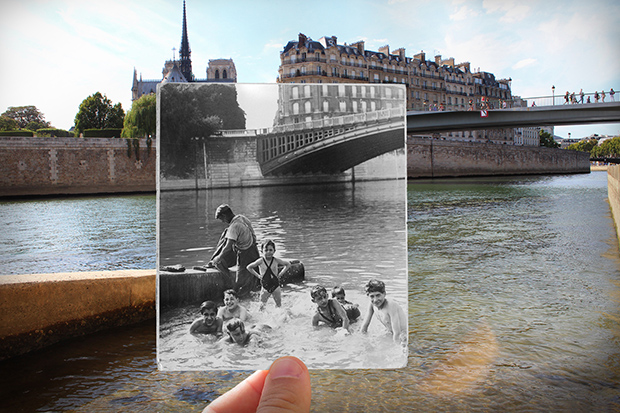 Quai d’Orléans. 1930. Swimming at the Quai d’Orléans, not far from the Pont Saint-Louis. Bathing in the Seine was forbidden in 1923, but the practice would continue regardless until the 1950s. Despite repeated promises and a marked improvement in the quality of the water, those who dived in the river ran the risk of fines (and possibly contamination).© Photothèque des Jeunes Parisiens 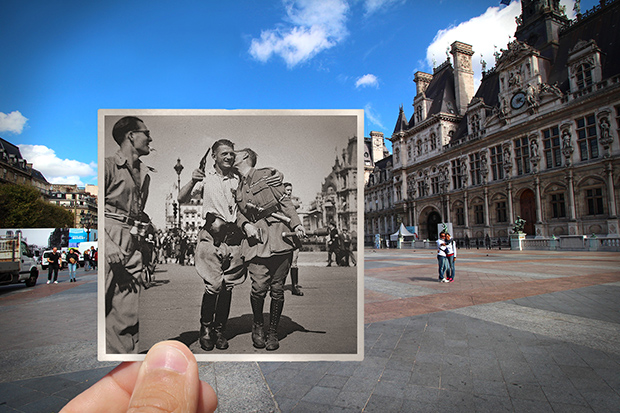 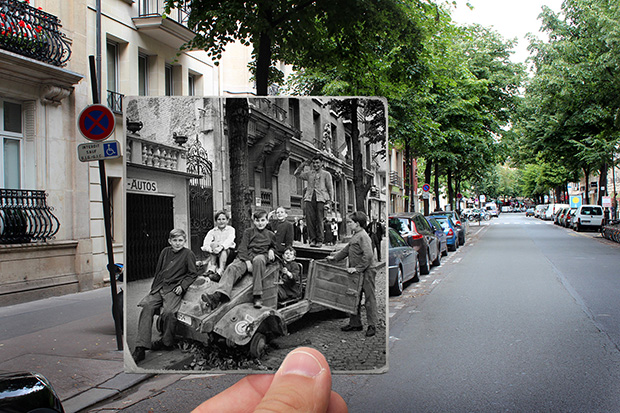 Avenue Mozart, 1944. Children play on an abandoned military vehicle after the Battle for Paris. 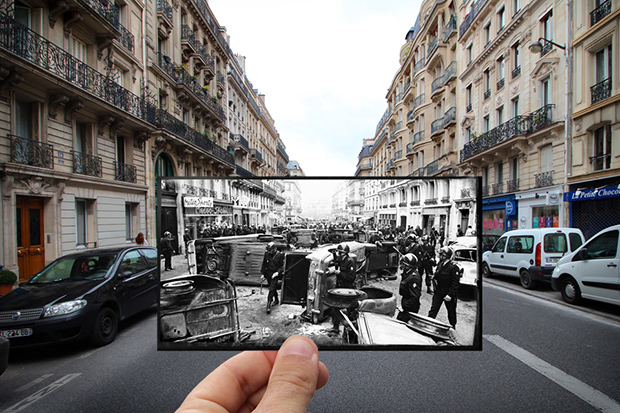 Rue Gay-Lussac. Mai 1968. On the night of May 10, 1968, barricades were set up in the Latin Quarter, especially on Rue Gay- Lussac. In the morning, security police took control of the battleground, littered with the chaos of overturned vehicles that had been set alight. © Fondation Gilles Caron/Gamma-Rapho.

All images © Julien Knez via Mashable