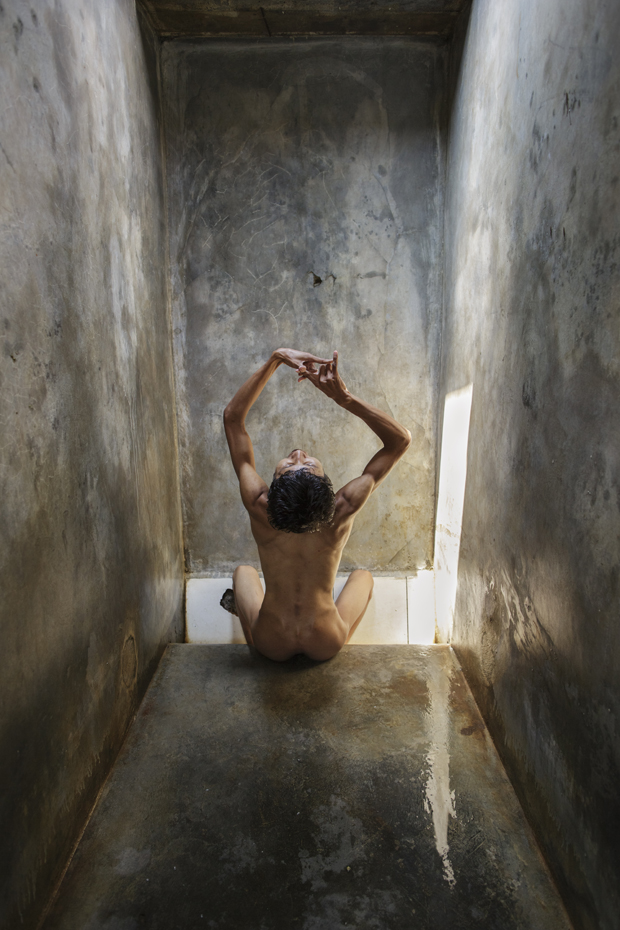 Pengabatan Alternatif Jasono (Jasono Alternate Treatmant), Cilacap, Central Java, Indonesia: Agus sings in his cage, his hands moving in an intricate dance. Agus is confined in a cell so he cannot run away. He is being held at Jasono Alternative Treatment, a private shelter with three patients in Cilicap, Central Java. Jasono, the owner, learned his method of treatment from a Pesantren in Jakarta; He sprays water on the men and women and gives them an herbal drink. 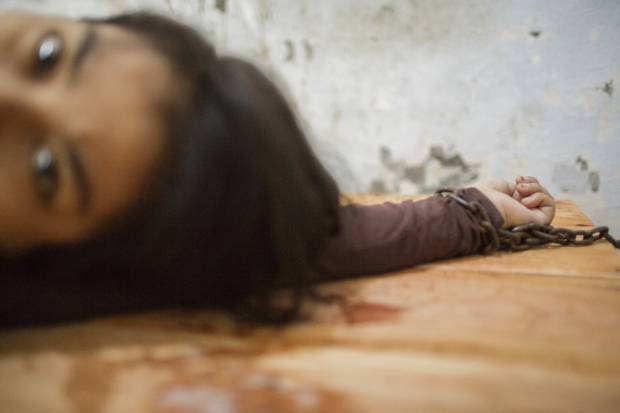 “Walking in the door has been easy,” says NY-based photographer Andrea Star Reese, whose ongoing documentary inside Indonesia’s mental facilities has taken her into the homes, schools, shelters and hospitals, where hundreds exist in appalling conditions because they are believed to be mentally ill. “Leaving is what is difficult,” reflects Reese, “I cannot leave this story.” Her long-term series named Disorder, which she hopes will raise awareness and help generate positive change towards the current mental health care in Indonesia, serves as a reminder of just how much power can lie in a single image.

The photos in this series are not easy viewing. In one image, the frail arm of a woman stretches out to collect food from between the bars of a cage that has enclosed her for eight years. Another photo shows a boy, who we discover from the caption ‘died after receiving a shower.’ Tragedy is commonplace. Men and women spend their days chained to the wall like dogs – a traditional practice in Indonesia termed pasung. We hear of people singing songs through the night to ward off loneliness, and people shy away from the light in dirty unfurnished rooms where the doors rarely close and allow no privacy. Nevertheless, these places offer a refuge from the burden of shame in a world where mental illness comes loaded with a stigma.

It is estimated that there are over 19 million people with psychosocial disabilities in Indonesia. “There are still doctors that use only one prescription and one diagnosis – insane,” Reese adds. In fact, many held in the facilities have not been given a diagnosis and don’t even know that they can be treated – extinguishing the little hope they might have had. This powerfully moving series reveals the devastating consequences that can result from not having the access to decent treatment and medication. 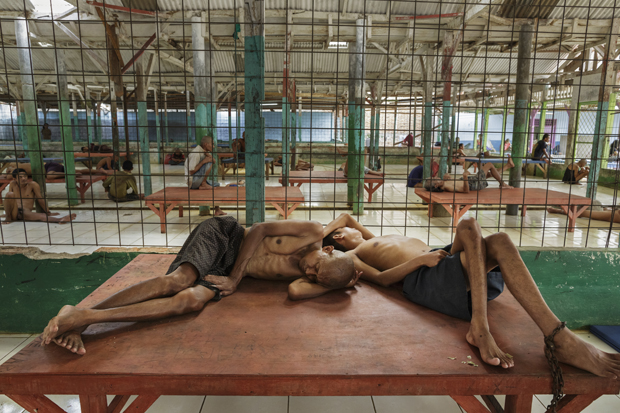 Galuh Foundation, Bekasi, Java, Indonesia: Galuh Foundation, located on the outskirts of Jakarta, Indonesia is licensed by Indonesia’s Government. No one is turned away if they cannot pay. Government assistance consists of two months of food supplies. For years there was no actual housing at Galuh Foundation Many of the residents were confined in a large cage enclosed pavilion. Some had been there for as long as nine years. The men and woman lived separated by a wire wall.

How did you get permission to photograph in these places?
“I visited communities in areas that were known to be at high risk for use of pasung and used local contacts. Sometimes we just visited neighborhoods asking questions. I consulted Mental Health Care professionals and experts regularly. It is important to know that caregivers in shelters and family homes throughout Indonesia do not feel that they are doing anything wrong. Traditional healers practice methods taught and handed down for centuries. Pasung (shackling or caging) is the traditional method of treatment used when medications are not an option.

“Gaining access for the most part is not difficult. Most shelters and families welcome me and are interested to speak about their practices and needs. I only document men and women who are willing to be photographed, and I spend time with them without photographing at all. Over the past few years, I have revisited many of the families and shelters and I continue to be welcomed. Most importantly, the men and women I photograph are happy to see me return. Only a few places – notably Galuh and the Silat Boarding School – refused access, but after repeated meetings and five requests each to Galuh and Pesantren Bina Ahlaq, I gained their trust.” 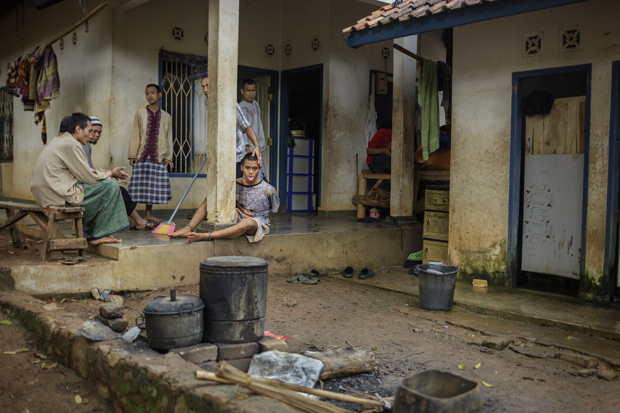 You mention that the traditional ‘pasung’ practice of restraint and confinement was officially banned in 1977, but how come is it still being used today?
“Pasung is used because mental health care is still difficult for families to access, and basic information about mental disabilities has not been made available. Despite the new Mental Health Care law that provides government insurance for the poor, traditional and faith-based healers continue to be preferred over doctors and hospitalization. Stigma is a huge issue. Caregivers are embarrassed or ashamed by the behavior exhibited by their mentally disabled family member. Violent behavior can also be an issue. Even after proper diagnosis and treatment have been successful, many men and women eventually return to their cages or shackles. The concept of a lifelong need for medication to treat chronic mental illness is not always understood. Addiction to medications is also feared. It is common for caregivers to stop providing medication after seeing improvement.” 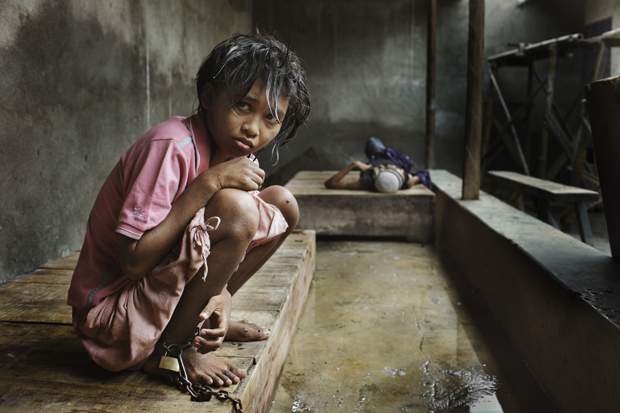 Yayasin Bina Lestari, Brebes, Central Java, Indonesia: Evi lived at Bina Lestari Foundation for several years. She was fifteen when she began to experience hallucinations. Her family paid for her platform bed and for the Islamic based spiritual approach to healing.

For you, what was the most disturbing thing you saw when photographing in these places?
“Walking in the door has been easy, even when conditions were horrifying, and they often are. Leaving is what is difficult and disturbing. I am continuing this documentation because conditions remain critical, progress is slow, and Indonesia’s government does pay attention to the International press. International and National NGO’s are using my photographs and reports to further their efforts. I cannot leave this story.

“What was most disturbing is that mentally disabled men and women still have no idea that they can be treated successfully. I have witnessed tortured lives filled with shame and despair and have documented too many endless until death tragedies. Evi, the young women in the pink dress died without realizing any relief from her suffering, as have others I have photographed. Anna is still starving, shut in her prison despite being diagnosed and issued prescriptions that remain unfilled. Even after treatment, the need for PTSD counseling is not even a consideration. Often people with mental disabilities are believed to feel less, to be incapable of understanding what they are experiencing. Men and women throughout Indonesia in shelters, in homes and those lost wandering the streets are at a very high risk of rape, assault and physical and mental abuse. Overwhelmed caregivers have no idea what to do, how to help, and the burden and shame of stigma leads to caregiver burnout.” 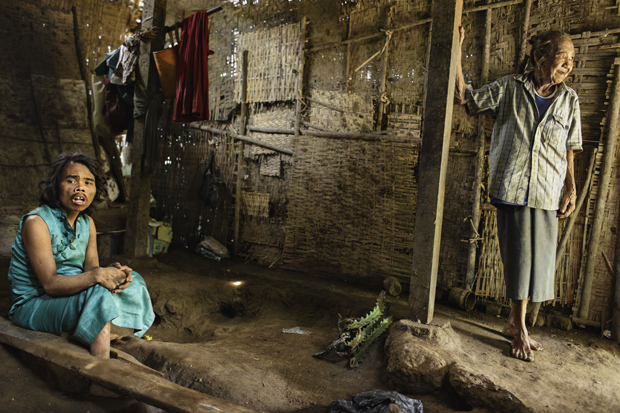 Ponorogo, East Java, Indonesia: Saimun, 40 years old, cannot talk. He has been living with his leg restrained by a wooden stock for five years. He has a brother who is mentally impaired as well. His mother must care for them alone. They are completely dependent on the good will of their neighbors who provide food for the family.

What improvements are being made to the Galuh Foundation through the model program, if any?
“Management is committed to change and is open and interested in improvements. Staff members are being trained under the model program supervision. A psychiatrist visits regularly, as does a doctor. Medications are prescribed. Religious services are held and group activities are being introduced. There is a new building for the residents. It is not much different from the former cage-like structure; it is still open to the elements. Privacy is a continuing problem – men and women are in close proximity, and the bathrooms and showers do not have doors or curtains. There are no beds, no chairs. But there is a staff attendant desk in the shelter. What is of great significance is that more people are getting better and leaving.” 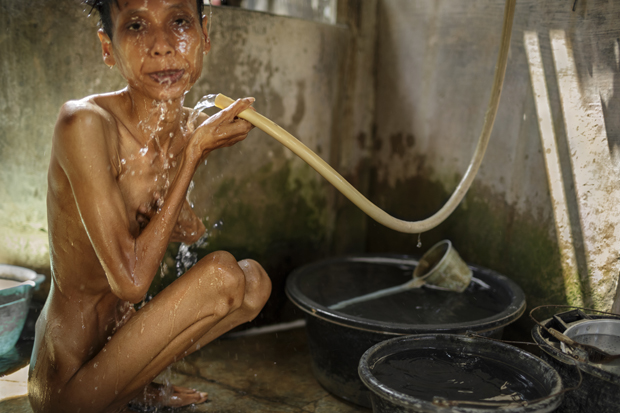 Brebes, Central Java, Indonesia: Anne’s father believes she does not need much to eat. Her family is distressed by the lack of improvement in her condition. Anne has been shut in a room without a window, built behind her home for more then ten years. As a child she loved to run, now she cannot stand. At night she can be heard singing dangdut (popular street band) songs to herself. 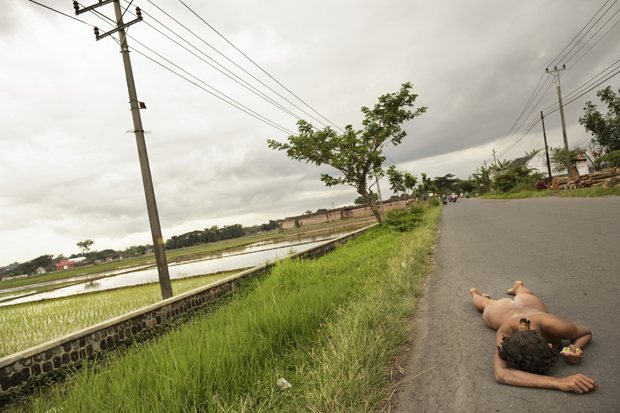 Serenan, Klaten, Central Java: Many men and women suffering from mental disabilities wander the streets and roads of Indonesia lost or abandoned by their families. 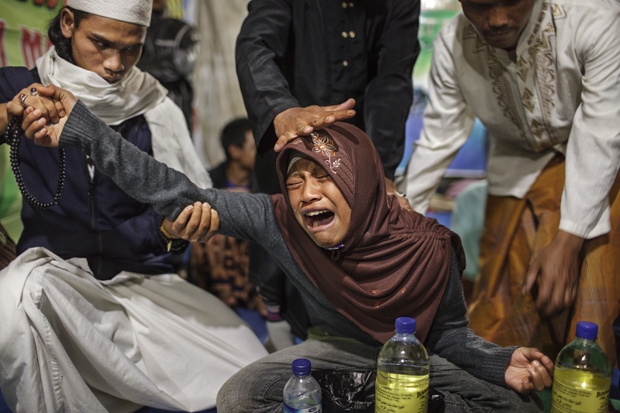 Pondok Laku Batin Alwaha, Tegal, Central Java, Indonesia: Muhammad Ikromudin, 25, was trained to have special powers. He assists the men and women attending a mass healing that will last throughout the day and night. Participants pray, drink herbal drinks, vomit, and eventually enter a hypnotic trance. Afterwards, cleansed of their sins they are showered with fragrant herbal water. 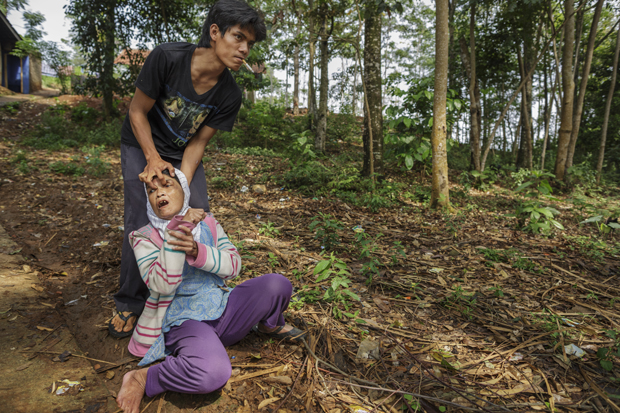 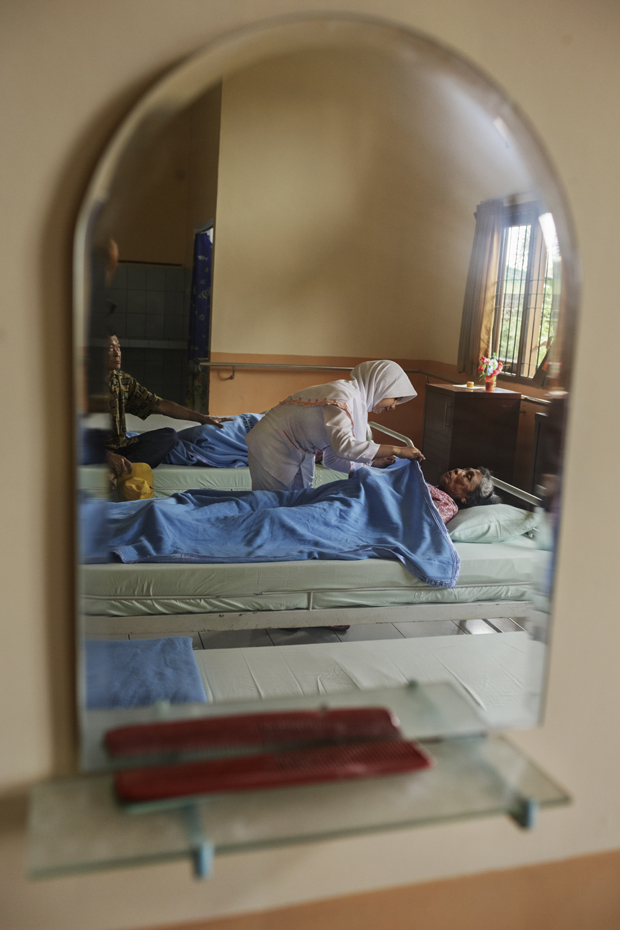 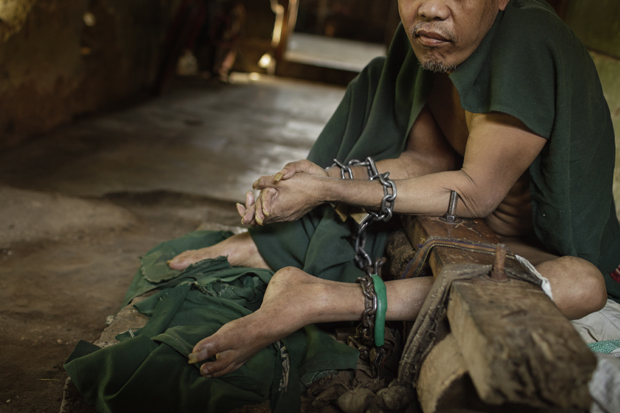 Cianjur, West Java, Indonesia: Saepudin lived shackled in stocks, a traditional form of Pasung (restraints) for 9 years. He was confined in a back room in his family home in West Java. Saepudin’s legs atrophied from disuse.