Photographer Chronicles the Simple Lives of Her Aunties in Rural Russia 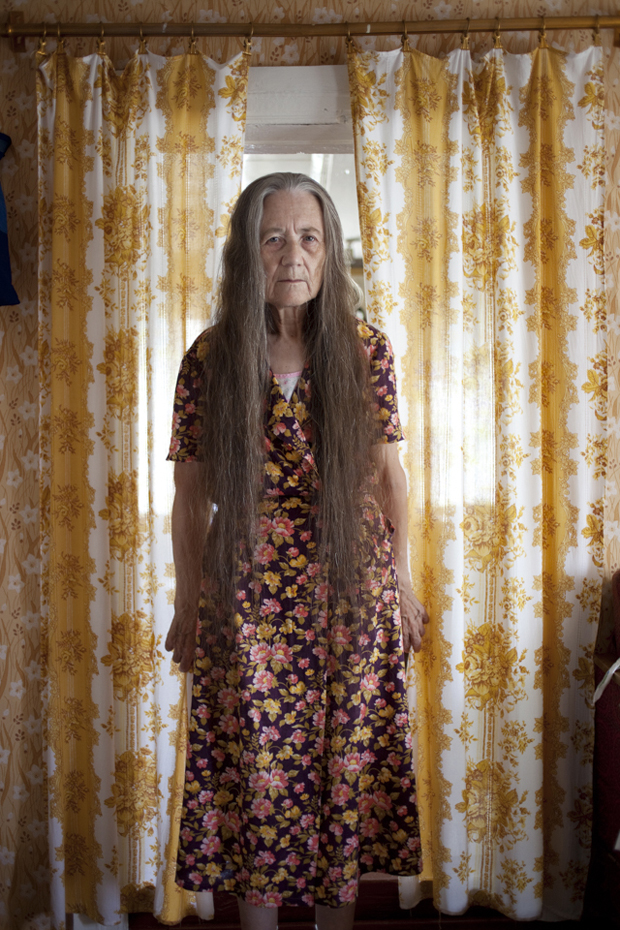 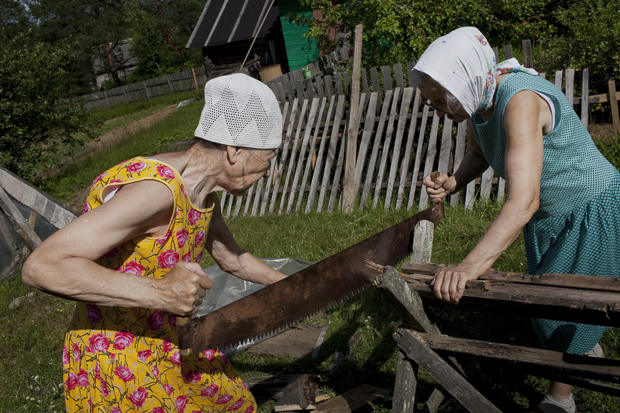 For Brooklyn-based photographer Nadia Sablin, many of her childhood memories took place in Russia. In the small village of Alekhovshchina, which lies five hours north of Saint Petersburg where Sablin was born and raised before she moved to the States, reside her two aunties who still maintain the house that was originally built by their father (Sablin’s grandfather) in the early 1900’s. Over seven consecutive summers, Sablin stayed with her aunties and began a project chronicling the lives and rituals of these two elderly, unmarried sisters with her lens. What unfolds in her photographs is a touching tale of sisterly love, familial bonds, and land as a means of survival.

In this pure rural existence occupied by flowers, fruits, and activities of puzzles, knitting, and jam-making – Sablin’s images reveal scenes that seem to be cut out from the pages of a fairy tale. Working in collaboration with the sisters, Sablin choreographed some scenes in attempt to recreate childhood memories, but she admits that not that much has changed since then. It remains a place seemingly frozen in time, far detached from the madness of the city and refreshingly free of digital distraction – minus of course the tiny TV set, which the sisters tune into each evening to watch Russian soaps as part of their daily ritual. 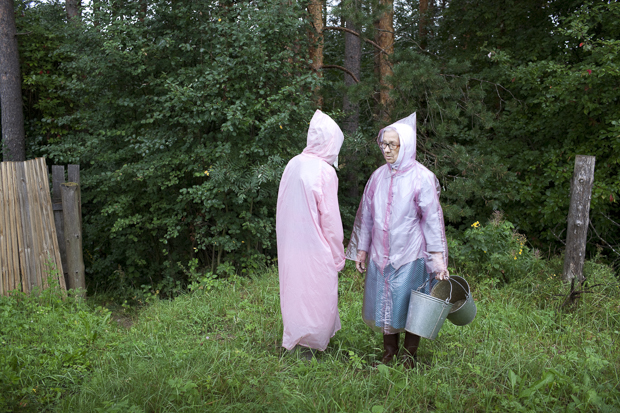 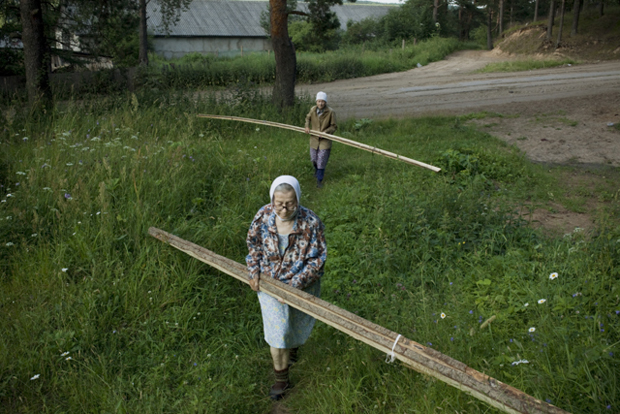 Can you tell us a bit about this series – where the idea came from, who are the aunties in your project?

In 1952, my grandfather began to lose his vision as a result of being wounded in WWII.  Wanting to return to the place where he grew up, he found an unoccupied hill in a village in the Leningrad region of Russia, close to his brothers, sisters and numerous cousins.  He took his house apart, log by log, and floated it down the Oyat River to its new location and reconstructed it.  This house, with no plumbing or heat, is the place where my father and his siblings grew up, each moving to the big city after finishing school.

Now, more than half a century later, the house still stands, occupied by two of my aunts in the warmer months.  The women are in their seventies, but remain physically active, planting potatoes, bringing water from the well, and chopping wood for heating the stove. They maintain and decorate their childhood home with new wallpapers, hand-sewn curtains, quilts and lace.  Handwritten recipes are folded to contain seeds for planting or rolled up balls of stray hair.  The meticulously weeded garden sprouts flowers among the strawberries and onions.

For the last seven years, I have been spending my summers with my aunts, photographing their habits and occupations and the small world that surrounds them. Their house, on its hill in the village, is as much a character as they are themselves.    My photographs are an exploration of the sisters’ reliance on each other, ancestral tradition and land as a means of survival.  The project is a meditation on aging, family and a sense of belonging. 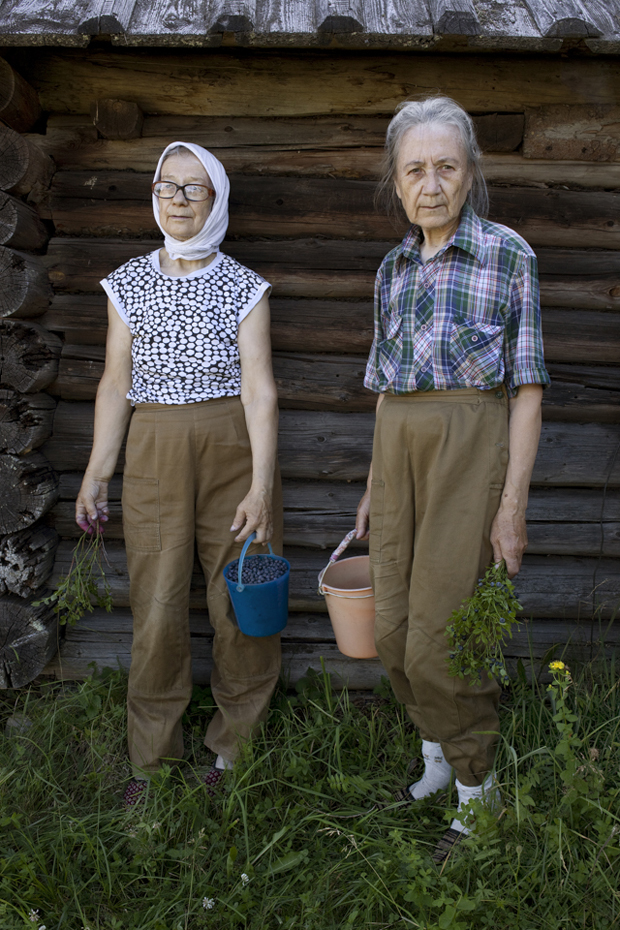 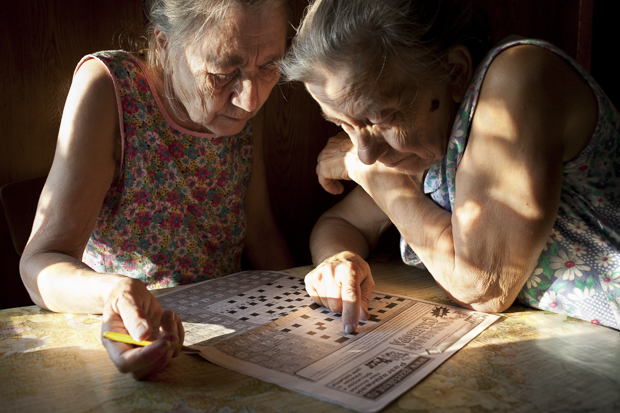 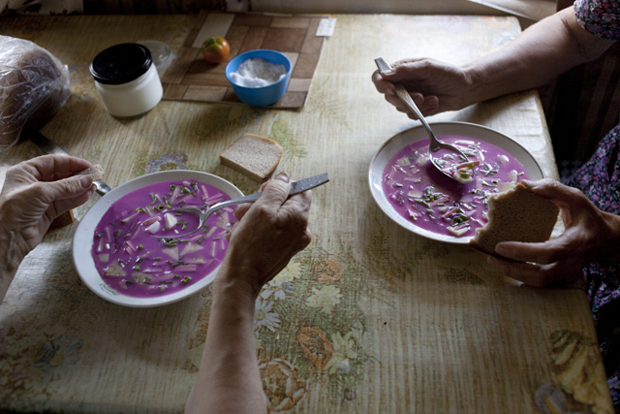 Talk us through a typical day in your aunties’ household.

My aunts’ life is bound to the cyclical nature of things. Alevtina wakes up at 7:00 and gets firewood to heat up the stove for oatmeal. A large kettle of water bubbles on the iron surface: soup and potatoes for lunch. When Ludmila wakes up, my aunts braid and pin up their hair. Breakfast is a quick and quiet affair—it’s time to get to work. While the grass is damp with morning dew, there are chores to do around the house. The floors are washed once a week; there are clothes that need mending. If the weather is dry, my aunts head into the garden, where there is always weeding and watering to be done, ants to be eradicated, fences to be repaired, little wooden borders to be built for the vegetable beds. In July, they make jam from currants and gooseberries in the garden.

They break at eleven-thirty for teatime—a small ceramic cup, a jelly candy cut into tiny pieces, bread with homemade jam. A few facts about the weather are exchanged. The chores continue until lunch.  Each sister is in charge of specific duties. Alevtina cooks, goes to the store, gets milk from a cousin, and performs most of the manual labor. Ludmila cleans up, weeds, arranges woodpiles in the shed, and knows where everything is stored.  She sews and knits the clothes my aunts wear.

Their life revolves around the patterns of days and seasons—the preparations, the chores, the satisfactions of self-sufficiency. The samovar is heated up by pine cones strictly at six thirty and after that the television claims their attention, sometimes supplemented by a puzzle or a crossword. Most days bed time is at eleven, but if Alevtina happens to go into town on errands, Ludmila will stay up late reading, staying up well after the sun goes down at midnight. 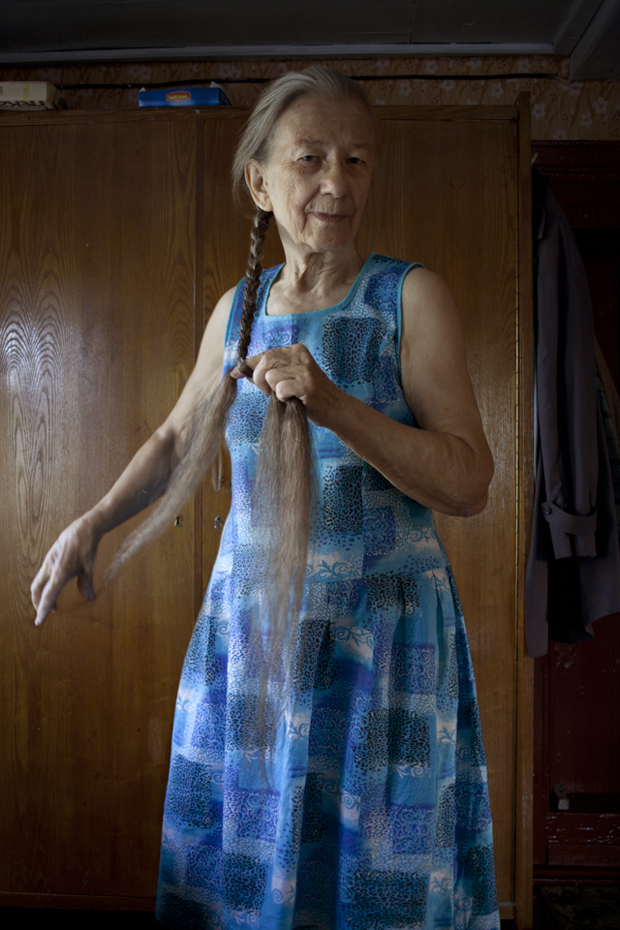 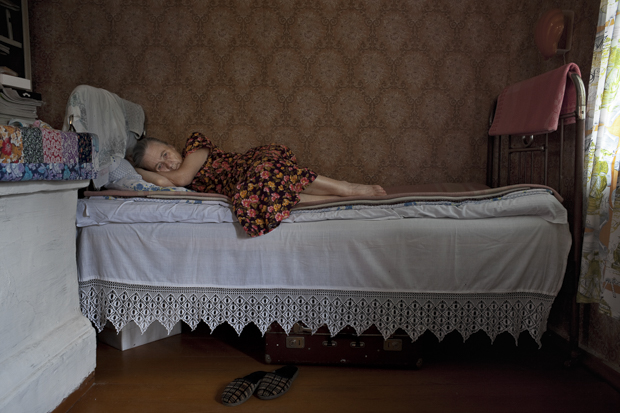 Did you have a special method or technique in getting the subjects to relax in front of the lens?

When I took pictures during my first visit, I had an idea to shoot a “little story”. But once I started I knew I had to keep going, that I wanted to capture the larger experience of being with them, in the house, in the village. Taking pictures was also a way to reintroduce myself to my aunts—to share what I do.

In the beginning I asked them to pose. To unbraid their hair or rearrange the furniture or do a puzzle—to recreate memories I had from childhood. As time has gone on, I’ve let them take the lead more and more, often simply recording their actions. We go back and forth, with Alevtina telling me to get up early the next morning to accompany them to the forest or with me asking Ludmila to weave a wreath of dandelions so I can make a portrait of her wearing a crown.

Do you have a favourite image from this series, and if yes – why?

This photograph took me six years and two days to make.  Whenever I’d get to the village where the aunties live, I would invariably be nocturnal because of jet-lag or photographing white nights in Saint Petersburg.  My aunties found it hilarious that I would be just waking up when they were already returning from the forest, buckets full of blueberries.  When I finally got it together to go with them, I spent five hours making exposures, but was completely dissatisfied with my results.  The next morning I got up early to try again, and surprised them into admitting they usually go to a very different spot for blueberries, but were trying to spare me the long walk.  The real berry spot was breathtaking.  I think about five photos from that day made it into the book Aunties. 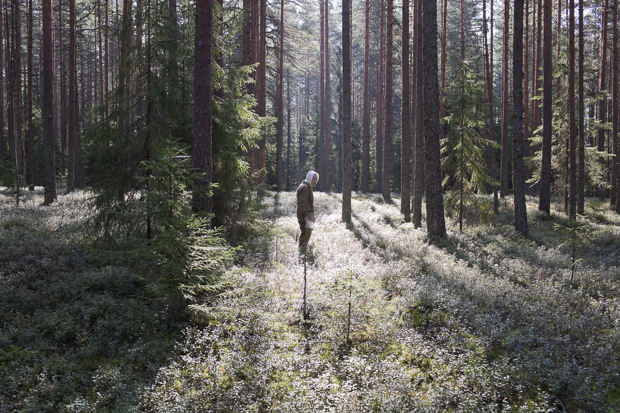 Sablin’s series Aunties has now been made into a book entitled Aunties: The Seven Summers of Alevtina and Ludmila. You can see her work here: www.nadiasablin.com. 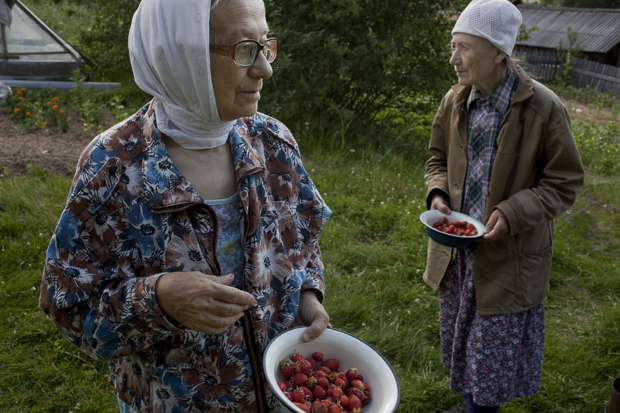 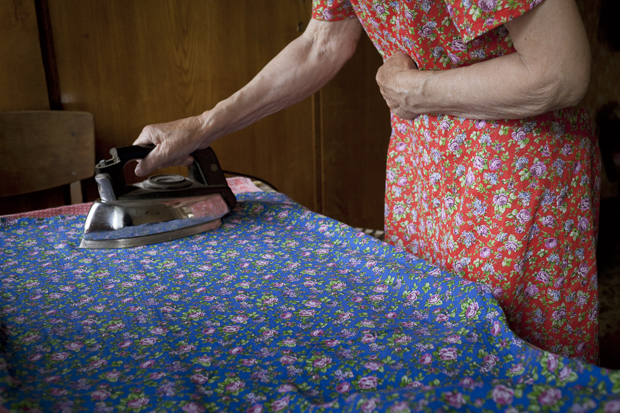 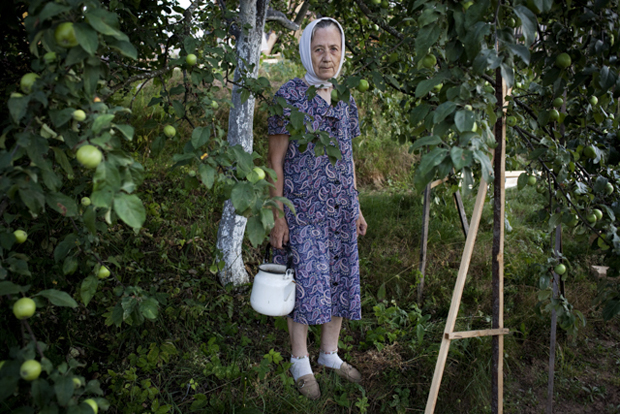 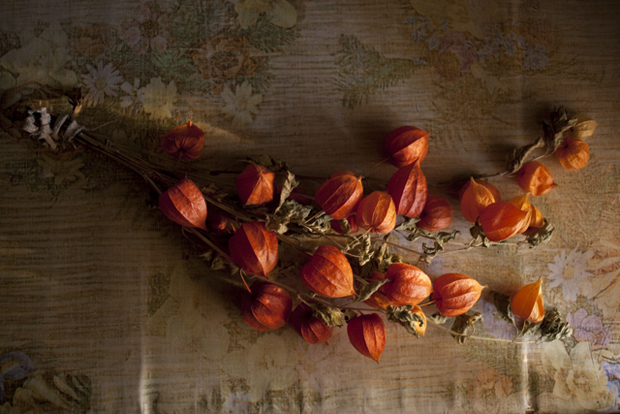