A Mesmerizing Look Inside America’s Textile Factories and Mills 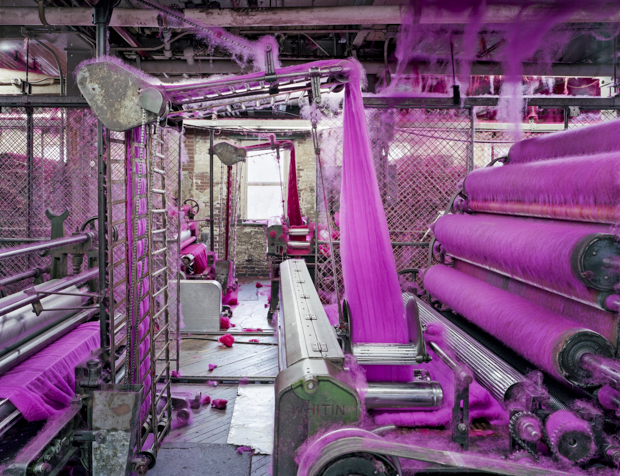 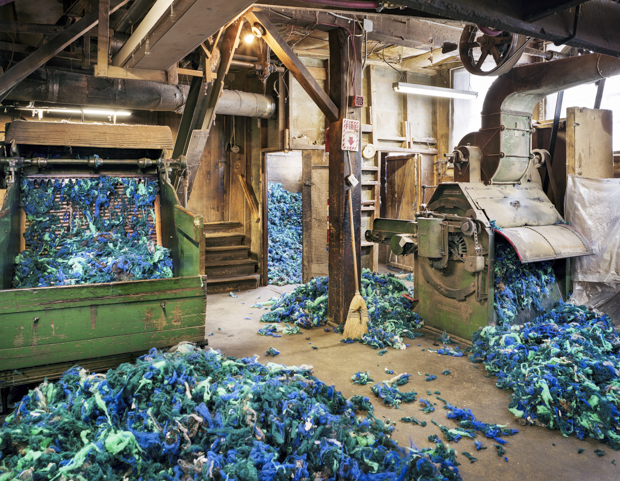 NY-based photographer Chris Payne’s latest work Textiles takes us behind the doors of America’s textile industry. To highlight the roots of this industry, Payne has chosen to photograph factories and mills located in the Northeast where it was born. In his photos we see dizzy patterns of repetition, immaculate grids of steel machinery, fluffy mountain peaks of wool, and bright-colored yarns suspended overhead like Vietnamese lanterns. But what makes this work interesting is the deliberate inclusion of the workers, which reveal the care, skill and craftsmanship of their work and the efforts taken to ensure a high-quality end product.

In previous projects, Payne has tended to focus on abandoned buildings and obsolete industries, so the shift towards documenting fully operational mills, buzzing with activity imbues this series with a revitalized positivity and renewed energy. However, it does make us question the future of these mills and of small-scale manufacturing in a world where quantity often precedes quality.

With a strong background in architecture, Payne has long held a fascination with the process of how things are made, and the architectural influence informs much of his ongoing photographic work. What unfolds in this series is an aesthetically beautiful insight into American manufacturing and of craftsmanship that still retains its value even in today’s world of machine-dominated production. The images transport us beyond the walls of rarely-seen factory interiors where hands still operate alongside vintage machinery. We speak with the photographer to find out more about this insightful project. 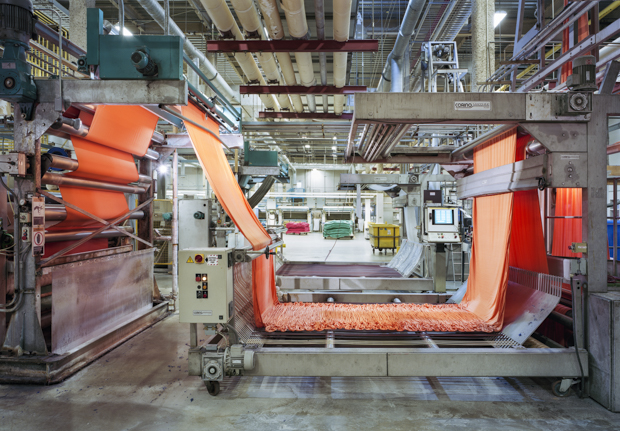 Where did the idea originate to start this project? Why factories?
“In 2010, I discovered an old yarn mill in Maine that reminded me of the state hospital workshops I had photographed for my book, Asylum. While those places had long been abandoned, this mill was fully operational, a scene from the past miraculously coexisting with the present. Given my background in architecture, I have always been fascinated by how things are made, and textiles are another form of construction, on a human scale.

“I am also deeply concerned about the loss of craftsmanship and manufacturing in the American workplace. We don’t make anything anymore, and in this era of service jobs and office work, most of us have never been inside a factory. Several decades of overseas competition, unequal trade policies, and a flood of cheap imports have decimated American factories. Since 1990, job losses in apparel and textiles have been greater than those in any other type of manufacturing, and today we have little idea where, or how, the shirt on our back is made. Taking on a project about this iconic industry seemed like an effective way to tell the story of American manufacturing as a whole—how it has changed, and what its future may hold.” 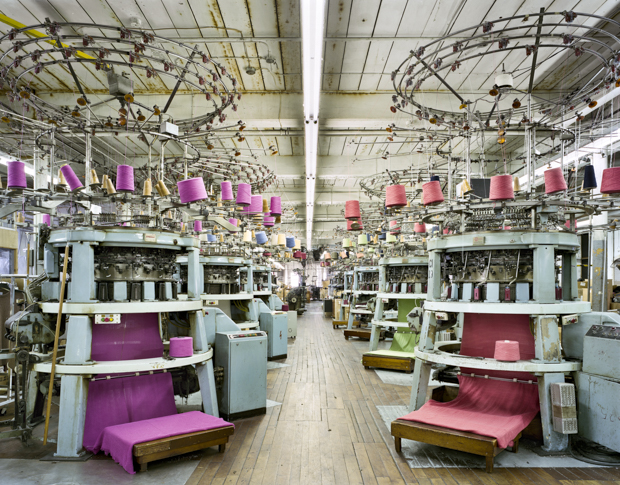 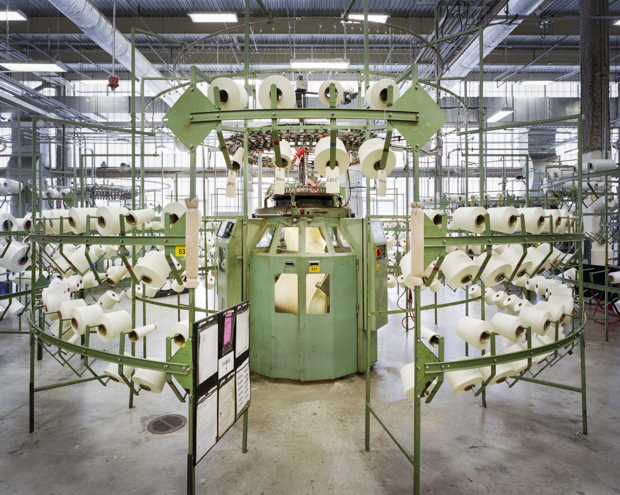 Where were these images taken?
“So far I have concentrated on mills in the Northeast, where the textile industry was born, because these are within driving distance from my home in New York City. Soon I hope to photograph mills in the South were production eventually shifted because labor was cheaper. The mills there tend to be modern, large, and mostly automated. By connecting the two regions an arc can be traced from the industry’s 19th century roots to its forefront in the 21st century.” 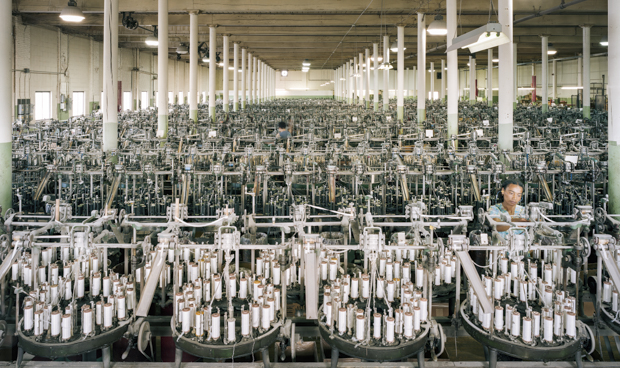 How did you find the atmosphere inside the factories and what kind of workers did you encounter?
“Walking into one of the older mills is like stepping back in time; they’re working museums. What photographs cannot convey is the raw visceral energy. The floors vibrate, the machines clank and spin as if they’re alive, and the noise is deafening. And yet, from the street, a passerby might never know what’s going on inside. What I find most visually compelling is the surreal contrast between the ancient, grimy machines and the beautiful, colorful fabric that they produce.

“The workplaces contain a cross section of young and old, skilled and unskilled, recent immigrants, and veteran employees, some of whom have spent their entire lives in a single factory. It is still common for a mill to draw its workforce from the surrounding neighborhood. For example, almost everyone at a mill in Pawtucket, Rhode Island, is Cape Verdean, and they speak Portuguese. The people I’ve met are proud of the work they do and eager to tell their story. Whether they have time to pose for a portrait is another story!” 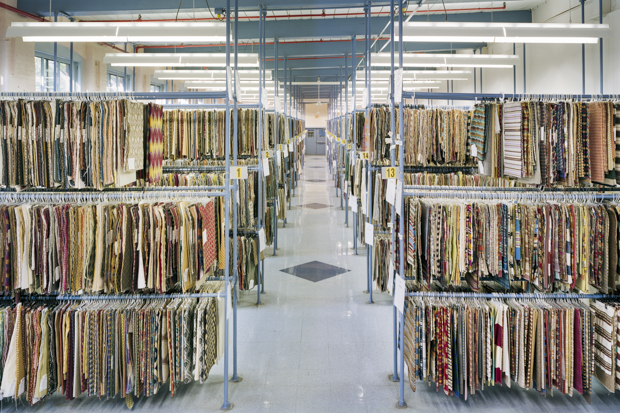 Is there a message you wish to convey through this series? What do you personally believe to be the future for these textile mills?
“Over the past five years, I have gained access to an industry that continues to thrive, albeit on a much smaller scale, and for the most part, out of public view. Many mills are doing quite well, having modernized to stay competitive, while others have survived by catering to niche markets that value the “genuine article” produced on the original, vintage equipment. I view my work as a celebration of American manufacturing—not a eulogy.

“I also wish to pay tribute to the undervalued segment of Americans who work in this sector. They share a quiet pride and dignity, and are proof that manual labor and craftsmanship still have value in today’s economy.” 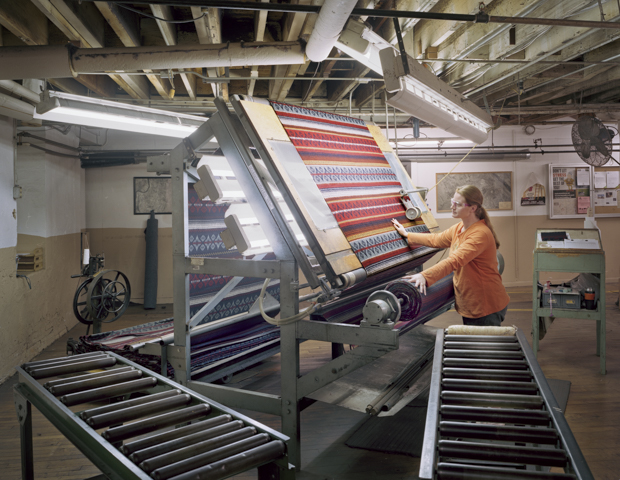 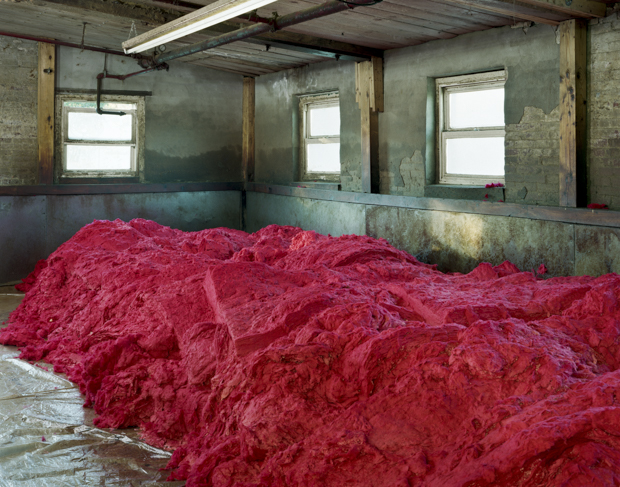