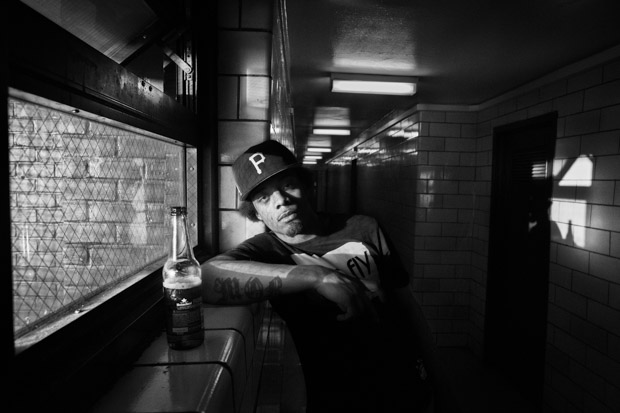 Smokey, leader of the southside Latin Kings gang in Brooklyn, poses for a photo while drinking a beer inside one of the housing projects in Brooklyn. 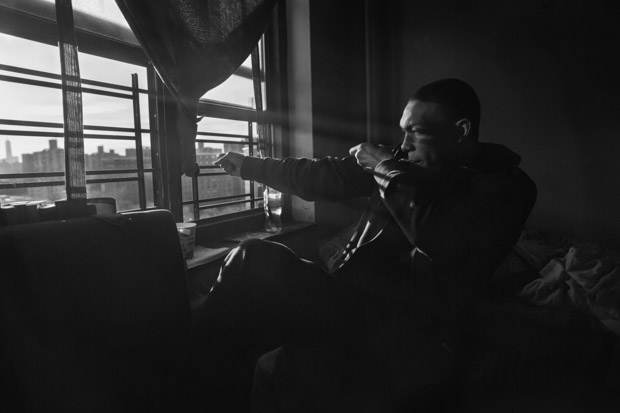 “From here I can shoot the J train” is what “B-Rad” said to his brother in law “Smokey.” B-Rad is not a Latin King; he is a member of the “Ysquad” Gang that rules a small neighborhood in Brooklyn.

When photographer Nicolas Enriquez moved from his hometown in Colombia to study photojournalism in New York, he was inspired to start a documentary series exploring gang culture in the USA. His series The Bloodline offers a rare glimpse into the day-to-day lives of the Latin Kings, one of America’s largest and most organized gangs with an estimated 35,000 active members. The title of his project – The Bloodline – is taken from the name designated by the Latin Kings to the New York faction of their gang.

In our society, the word ‘gang’ holds no positive connotations. Enriquez attempts to understand their lifestyle through the lens and probe deeper beyond the stereotypes. By spending time with them, he found that beneath their aggressive veneer, these gang members were actually very lonely individuals, and even within their groups, he could sense the solitude and sadness of these young people.

In gaining the trust of the gang members, Enriquez was granted full access into their lives, and his series is an intimate and insightful portrait of gang life. His images reveal the hostility of their environment, the incendiary heat of the violence, the paranoia, and the permanent state of unease that they can only fully escape from in marijuana. 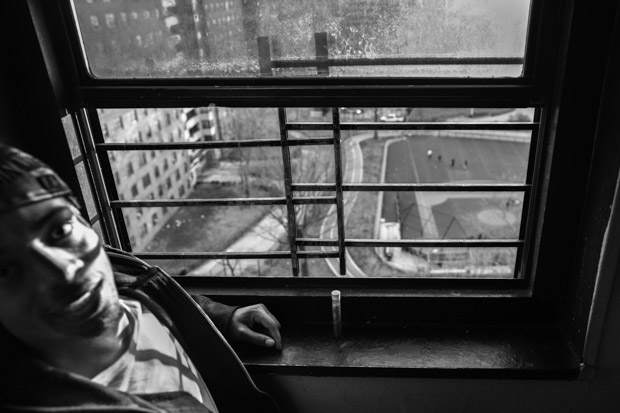 What was the inspiration behind this project?
“Most of the inspiration for me to start this project came from one of my teachers while I was a student at ICP. His name is Joseph Rodriguez, and he has a wide body of work documenting gangs in L.A. I’ve always been a big fan of his work, and I’m very inspired by his approach. It was he that encouraged me and pushed me to keep going with the project, and he offered advice several times during the process of getting access to photograph the gang.”

How did you gain the trust of your subjects before photographing them?
“I started a project called people living in their neighborhoods, which in fact was just a cover for me to hang out around housing projects, approach people and interact with them. For me it was a way of testing the water and familiarizing myself with the environment and the people who lived in it. After photographing more than a hundred portraits and conducting short interviews with these people, I started to form an opinion of who might or might not be related with a gang. I kept in touch with those whom I suspected to be part of a gang and started calling them and trying to hang out with them. At the time I was only 20 years old, so there was not much I could do while hanging out, besides inviting them to eat or drink coffee at a grocery store, and that helped me because it strengthened their trust in me. I was not looking to be part of the gang; I was just curious and wanted to learn more about not only the gangs but their own personal lives, and they felt this curiosity and opened to it.” 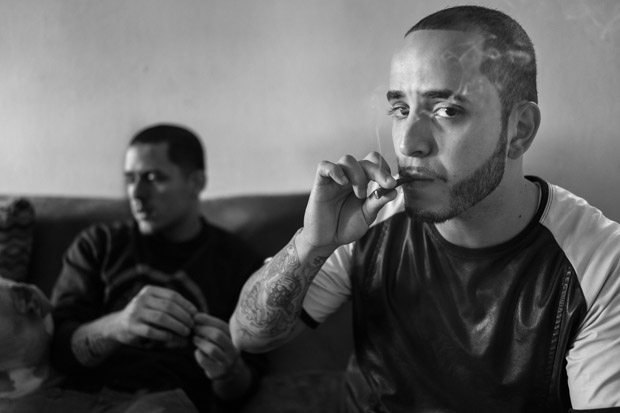 Demetrius smokes a joint of marijuana at his apartment in Brooklyn. Demetrius was released from jail one month ago after spending three years incarcerated. 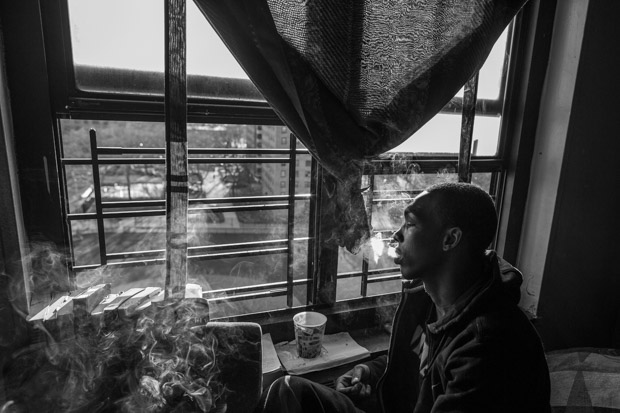 What difficulties did you encounter while shooting, if any?
“Technically, the lack of light. Sometimes this produced an interesting shot, but in a life full of sudden actions, it was hard to capture a precise moment. On the personal side, it was hard for me to understand their position and their decision – for instance, why would you become a gang member? Very few people respect you; you’re constantly on the police radar and regularly enter conflict with other gangs… But also would you choose this lifestyle? Little by little I started to put my judgements of these people aside, and I saw them for who they really were – the more human side. This didn’t change my opinion on their actions, but it did give me a reason and something to point at.” 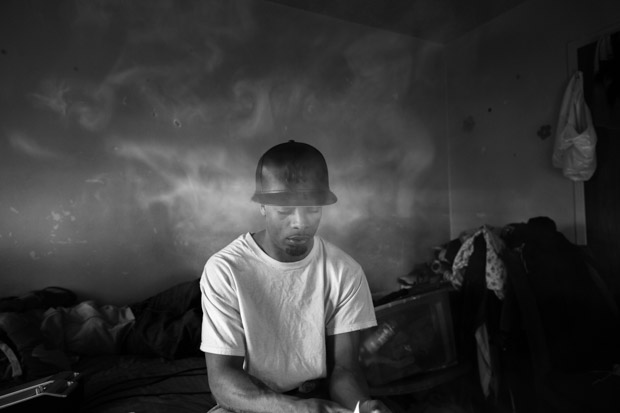 What image do you hope to portray of the Latin Kings in your series?
“I got to the point where I started seeing the gang members as kids in a boy’s club – having fun, being boys and playing around, supporting each other – there was a lot of camaraderie and I enjoyed it and photographed them like that for a long time. Then I saw this “boy’s club” being crushed by the pressure of making decisions or by the situations they had to face, and that somehow also changed my way of shooting. I felt the pressure and followed it, and ultimately it changed my perspective. I wish nothing but to portray the reality of their lives, the struggle and the lack of attention there is for people living under difficult and violent conditions.” 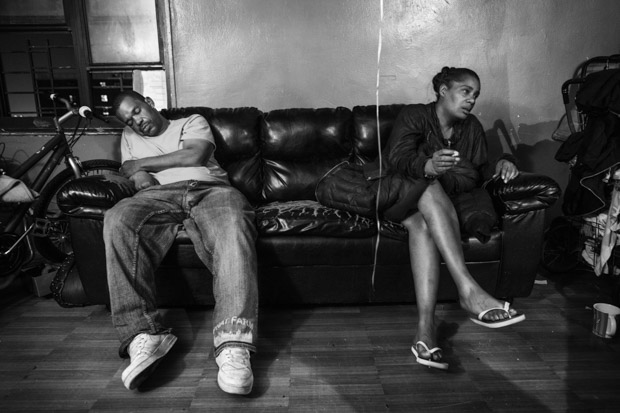 A distant familly is one of the main reasons why teenagers join gangs. The lack of support and understanding pushes teenagers to seek a community that will help them, and they find the answer to this questions in gangs. 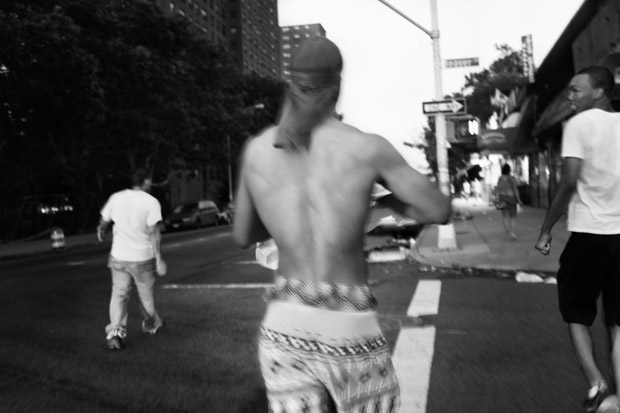 Smokey walks down the street while taking his shirt off before trying to fight some other gang members from a rival gang called the Trinitarios. 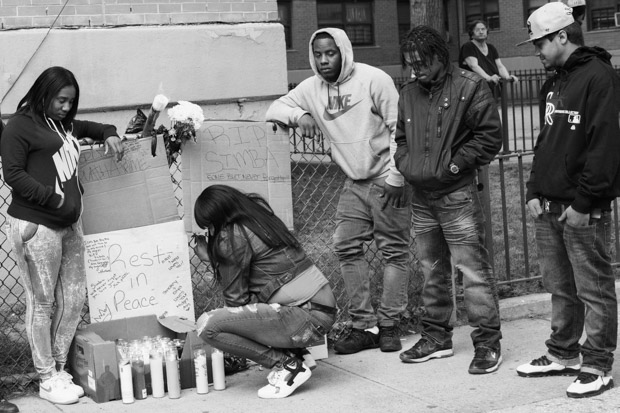 Gang members and friends mourn the death of Simbaa, who died after being stabbed 20 times on the chest in Williamsburg, Brooklyn. Death has become something familiar to gang members; memorial ceremonies and visits to the hospital are common, and they always live with the fear of who is going to be the next one.