Meet the ‘Watchmen’ of the Arizona Border 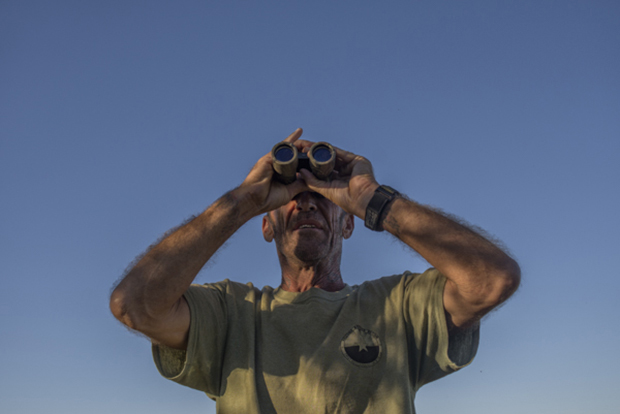 October 5, 2014: “Nailer” eyes the hills with binoculars in the early morning 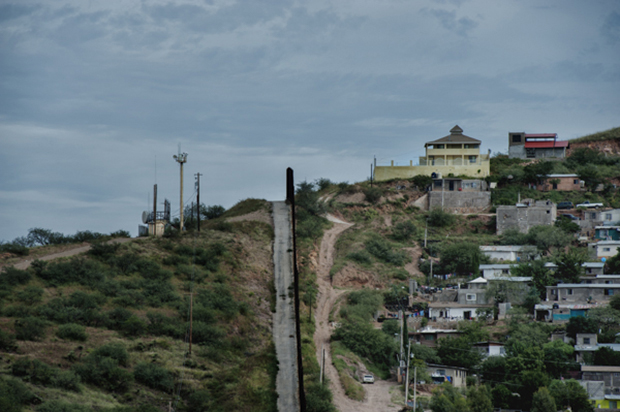 October 6, 2014: The border fence follows the geography of the land in Nogales. To the left is the United States, with Mexico to the right

The ‘watchmen’ of The Arizona Border Recon don real tactical gear, use real experience learned in the military, employ real surveillance equipment, and if called upon, real weapons to patrol the border town of Nogales in an effort to “stop illegal immigration, drug smuggling, and human smuggling.” Their actions, their intent, their day-to-day efforts, as documented in lush, dusky blues and camouflage greens by photographer Johnny Milano in his project The Hills of Pima, are indeed indicative of men with purpose. The images of these men killing time in a field, assessing military surveillance videos, or heading off into the night to patrol coordinates deemed suspect, leads us to believe – if we had no captions – that we are seeing a group of military men on tour, presumably with a mission, fighting a real cause, with real directives. The work these men carry out, however, involves the murky territory of border politics and societies-in-flux. It is not Milano’s photographs that are called into question here – his work continues to feel very dedicated about informing us of the who, what, and how while continuously seeking for the visual nuance of the why. As the demographics of our country change right before our eyes so too does the line in the sand that we share with Mexico. Is it ‘illegal’ to flee a nation in crisis? 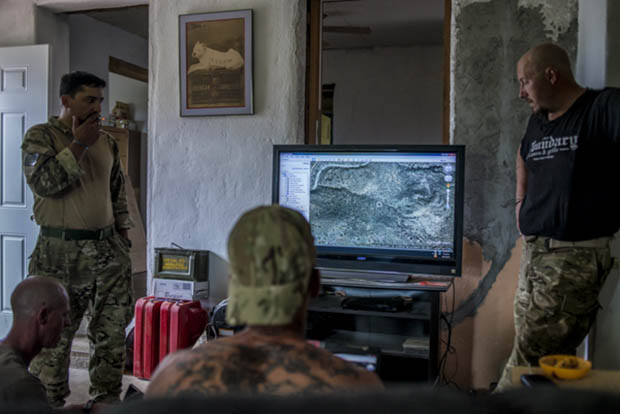 October 7, 2014: “Nailer” sits and discusses the coming days of the next chapter of Operation Ivie. Nailer uses Google Earth to mark possible rally points for which the teams of AZBR will stay the night, surveying. 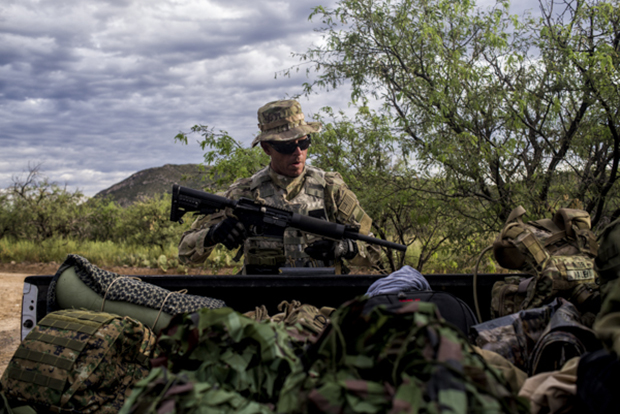 October 7, 2014: Aaron, a first time participant with the Arizona Border Recon, is a Texas resident. Due to the amount of private land that marks the border in Texas, Aaron jumped at the chance to participate and “do his part.”

Do you know the genesis of these guys’ intentions? They are vets – but do not really want to retire? If they witness a family/two young men crossing the border are they ‘authorized’ to do anything?
“Yes most are vets, although not all. Some were and still are international private security experts, and some are men who have never seen combat before but still own the military grade equipment and display the necessary skills. I think “authorization” becomes a complicated term in this sense. The Arizona State Legislature, of which these particular men operate, permit private individuals to perform citizens arrests for felonies and certain misdemeanors. It becomes complicated because although the state may give legal authority to do so, this is actually an international policy issue concerning inter-country borders, not something like a bank robbery.”

Were you witness to anything that would fall under their mission to ‘protect’ the border? The images in this essay give great insight into the mindset and ‘border readiness’ of these men – it’s like a hypothetical war zone (guns, gear, binoculars, torn-up holding houses) but there is no ‘war’ per se…
“To them this is most certainly an invasion. In some respects I believe the US/Mexico border is the nearest domestic geographic place where many of the vets can compare to their tours in Afghanistan or Iraq, or elsewhere, so in some way it is the easiest way to get back into “protecting the country” from what they believe is the most imminent threat and performing their civic duty.” 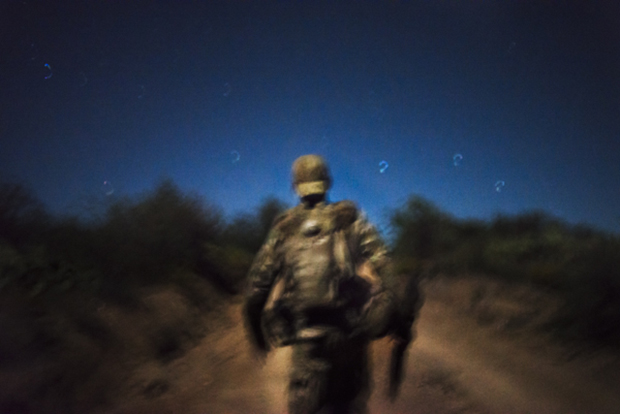 October 4, 2014: “Nailer” walks through a wash less than a mile from the Arizona/Mexico border looking for reports of a possible group that was making its way through the wash. Nailer explains that the busiest time of day for border crossings is during nighttime, particularly during a full moon. 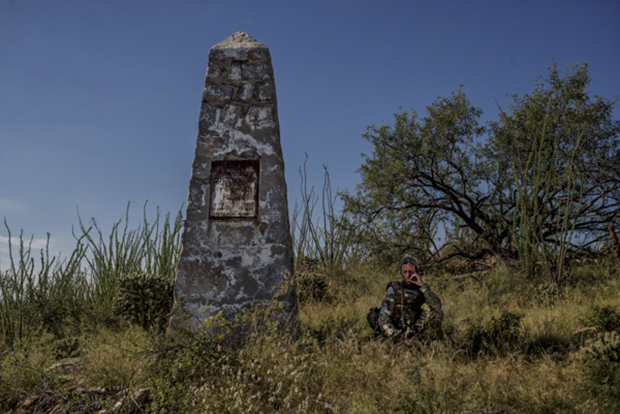 October 5, 2014: “Nailer” sits next to border monument #137, a historic traditional marker of the Mexico/US border that was used as the border markings prior to the fence being put up. 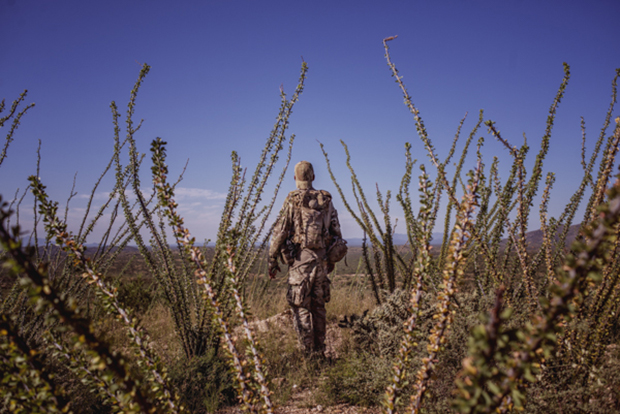 October 5, 2014: “Nailer” crosses over a hillside where border monument #137 lies, a historic traditional marker of the Mexico/US border that was used as the border markings prior to the fence being put up. 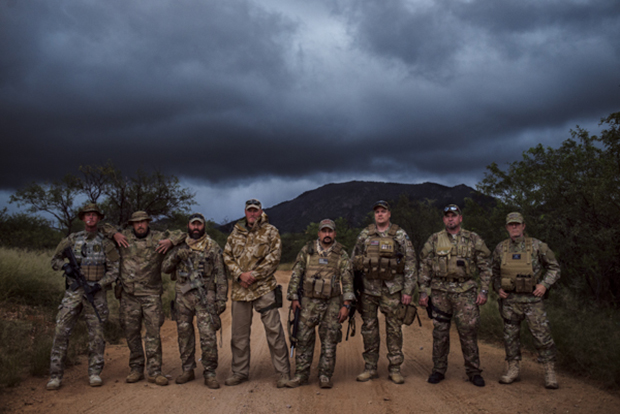 OCTOBER 7 2014 SASABE ARIZONA- The prospective members of the Arizona Border Recon take a group photo before heading back from ominous weather. For some in the group, it is their first time out. The AZBR uses this time as a vetting process for newcomers.

Is there a backstory to the man inspecting the backyard of the white house? Did he have a lead? What about the man sitting in the field all dressed up smoking a cigarette next to the cement monument?
“These two pictures actually have very particular backstories that I feel are very significant. The first of the CBP agent in the backyard is an image that exemplifies the incredibly close working relationship between the field agents of the CBP and some of the organizers of the civilian militias. On an executive federal level, CBP administrators have explained that they do not welcome the help of civilian militias in performing border protection operations, but on the ground level, the agents perform house calls to these agents, seen here, where they receive intel and information from the past few days of patrols.

The other image of the man sitting next the monument represents the range of their operations. That monument is number 137 of 276 border monuments that dot the border with Mexico. Beyond that monument is Mexico. To me this represents an incredibly important point, as much of the discussion relies heavily on the idea that the border is simply porous in only one direction. Many don’t pay any mind to the possibility of something like these groups retaining the possibility of crossing into Mexico. And although there haven’t been any cases like that to my knowledge, the possibility still remains.” 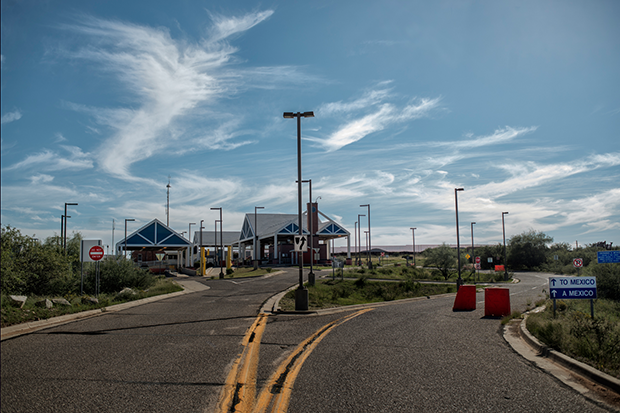 October 5 2014: The Sasabe Port of Entry, one of the quietest points of entry in the country and the least trafficked crossing in the state. According to the 2010 census, the population for Sasabe was 54. 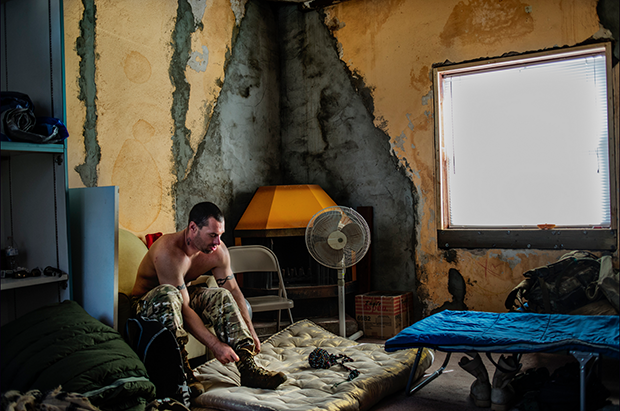 October 5 2014: Blaine laces up his boots at the Arizona Border Recon’s “Forward Operating Base” (FOB) in Arizona, where the group reorganizes and launches its operations from.