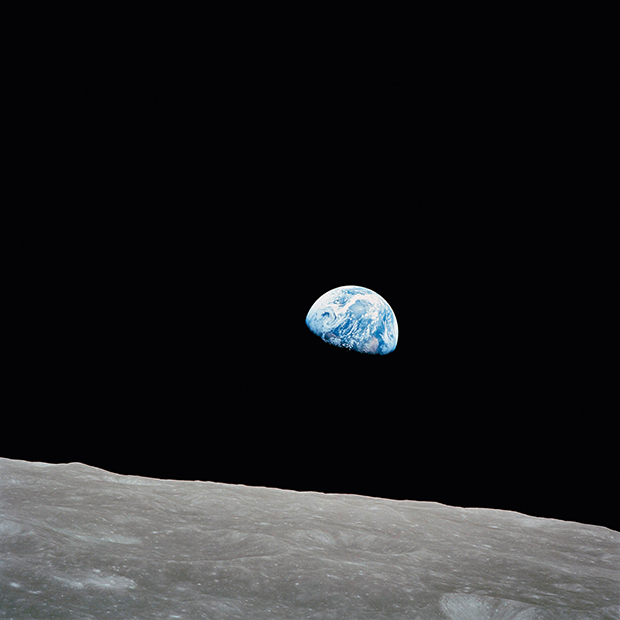 “Earthrise” was shot on December 24, 1968, by astronaut William Anders during the Apollo 8 mission. The famed nature photographer Galen Rowell believed this to be the most influential environmental photograph ever taken—and it certainly stands out as one of the most extraordinary observations of Earth from space. The impromptu shot was taken as the spacecraft was being rotated and Anders caught sight of the impressive view. In recordings of the moment, you can hear him marvel, “Wow, is that pretty!” as if he were seeing our planet for the first time. In the image, the Earth is rising 5 degrees above the horizon, just as the astronauts are rising up from behind the eastern (as viewed from Earth) part of the Moon. Although the Moon looks close enough to touch, it’s actually about 484 miles (779 kilometers) from the spacecraft. 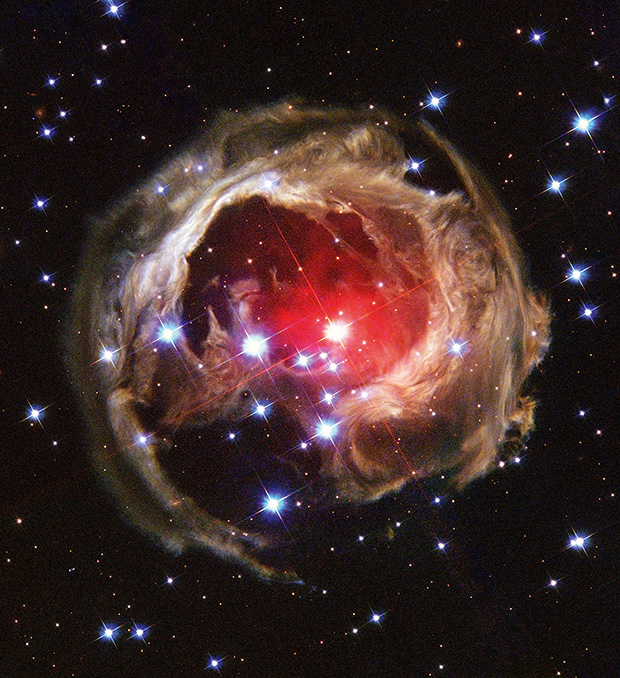 This iconic image, taken by the Hubble Space Telescope’s Advanced Camera for Surveys on February 8, 2004, is often compared to the vivid, erratic whorls of color in a Van Gogh painting and reveals a never-before-seen halo of dust and light skyrocketing across trillions of miles. The dust and light surround a red supergiant known as V838 Monocerotis, located about 20,000 light years from Earth at the outer edge of the Milky Way. In 2002, the star’s brightness increased by several magnitudes over the course of several months, making it six hundred thousand times more luminous than the Sun. This pulse of light, also known as a light echo, most likely occurred some tens of thousands of years ago.

From ancient mythologies to modern science, mankind has trusted that in some essential way, we are bound to whatever it is that lies beyond the horizon and without the confines of the Earth’s atmosphere.

According the the Big Bang theory, our universe was born as hot plasma, a haze of energy breaking through total darkness until at last after millions upon millions of years, it became manifest to human eyes. Over the past century, NASA has built and operated telescopes and cameras capable of detecting that which is still invisible to us, of defining and rendering matter that shines more brightly than our forebears could never have envisioned. Earth and Space, a new book set to release this November through Chronicle Books, is a collection of the most astonishing vistas from NASA’s treasured archives.

Prefaced by Bill Nye of Science Guy stardom and introduced by author Nirmala Nataraj, Earth and Space takes our planet as its point of departure, moving sequentially through the universe and ultimately resting on clusters of galaxies colliding at a distance of 5.4 billion light years from where we stand. A large portion of the images were shot by the Hubble Space Telescope, which is capable of capturing light that eludes the naked eye. Other space telescopes weave in and out of the narrative, their captures sometimes forming composites with those of Hubble to reveal in unison sights that cannot be registered by each telescope alone.

As noted by Nataraj, space photography has only been a primary pursuit of NASA’s over the last half century or so; before that, most images of space were snapshots taken by astronauts and brought home to Earth. Now, with the innovations of engineers, scientists, and artists, stellar astrophotography has been able to track stars as they are born and as they die, to map black holes and dark matter, solar flares and supernovae.

Hubble, now in its twilight years, is just the beginning. Nataraj reports that by 2018, NASA will dispatch the James Webb Space Telescope millions of miles from our solar system. This collection of images both solves and complicates that eternal riddle of our own place in the universe, our connection to space and our significance within it. While it illuminates so much that once lay in darkness, Earth and Space carries the promise of more, of faraway matter and light that waits to be found. 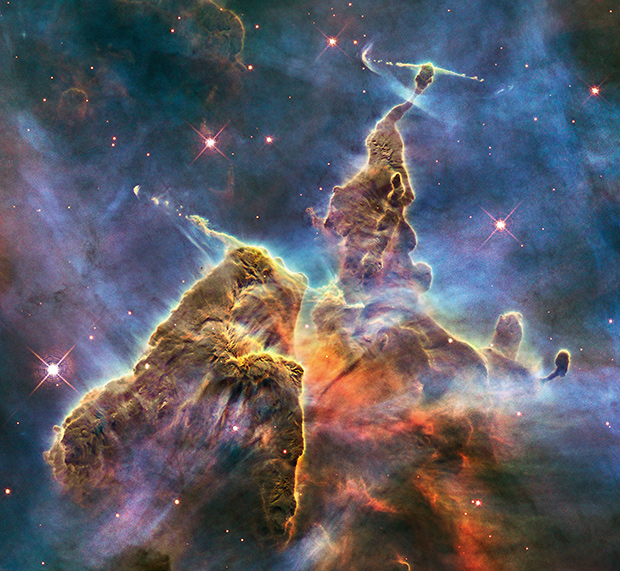 Although it resembles a fantastical landscape, the Carina Nebula presents a picture of elegant chaos far stranger than fiction. This hotbed of stellar activity, 7,500 light years from Earth, is a cradle for newborn stars—although the environment is anything but peaceful. Jets of ionized gas and charged particles from extra-hot newborn stars generate the birth of even more stars. This image shows Mystic Mountain, a massive monument of gas and dust within the nebula, which was captured in February 2010 by the Hubble Space Telescope. The pair of jets in the center of the image—labeled hh 901 and hh 902, and visible as thin streamers shooting out from a central “peak” are shot out by swirling discs that surround the stars. The colors in the image correspond to the light emitted by different elements: oxygen is imaged in blue, hydrogen and nitrogen in green, and sulfur in red. 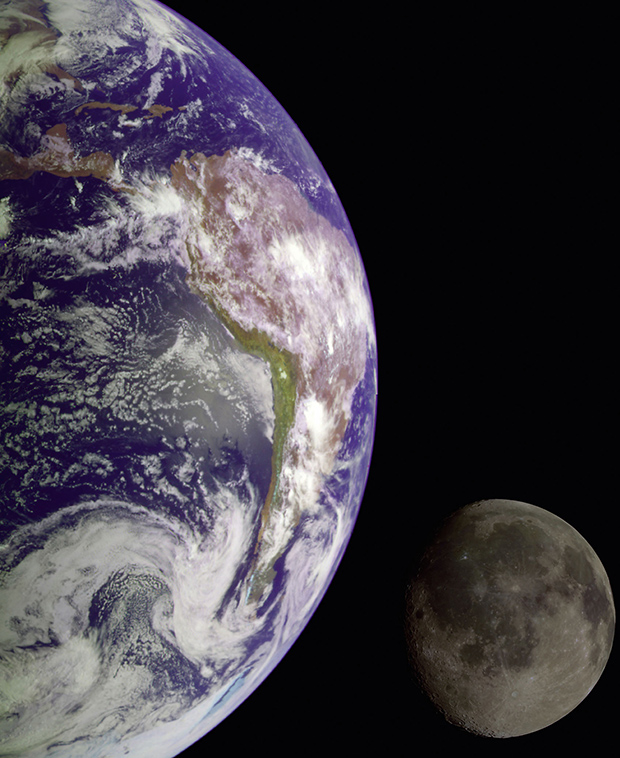 This composite image was assembled from separate photographs taken of the Earth and the Moon by the Galileo spacecraft in 1992 while it was en route to Jupiter. The spacecraft’s transit around the Earth and the Moon created a slingshot effect that helped it to reach the speed necessary to get closer to the giant planet. On the Earth you can see the swirling pattern of storm clouds hovering over the Pacific Ocean, southwest of South America. The darker areas of the Moon, including the giant Tycho impact basin, are packed with lava rock that formed following the impact of an asteroid. 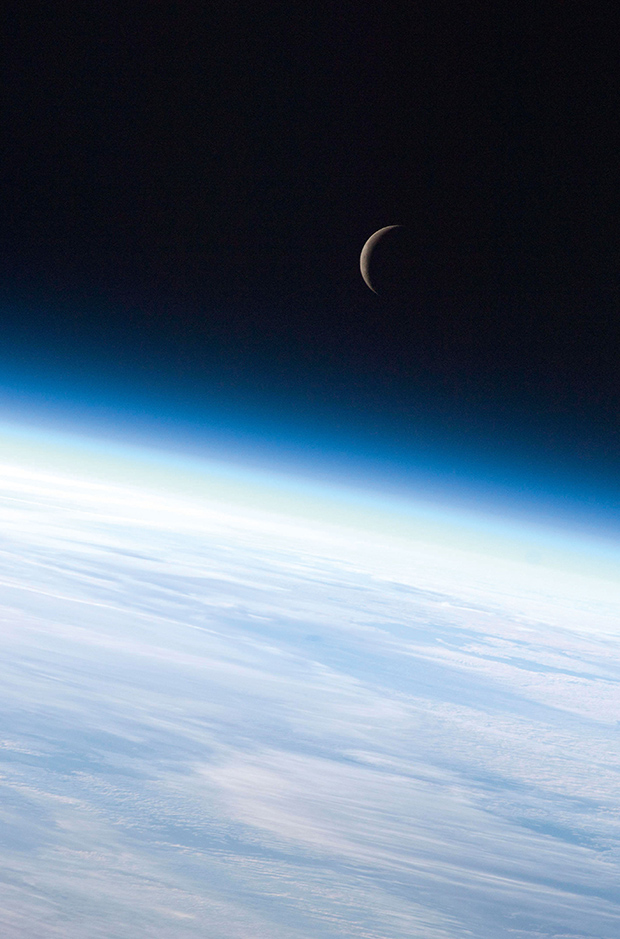 This image of a last-quarter crescent Moon suspended above a luminous pale Earth was taken by the Expedition 24 crew on the International Space Station in 2010. A last-quarter Moon occurs about three weeks after a new Moon, when the Moon is three-quarters of its orbit around the Earth. Its lighted portion typically faces the horizon of the Earth, as shown in this photograph. A last-quarter Moon gives us a clearer picture of the Earth’s orbit around the Sun. To view a last-quarter Moon in the sky right before dawn actually provides us a view of the path of our planet’s orbit as it moves forward. If the Moon weren’t also in constant motion, Earth’s eighteen mile (or twenty-nine kilometer) per second speed could carry us to the Moon within just a few hours. 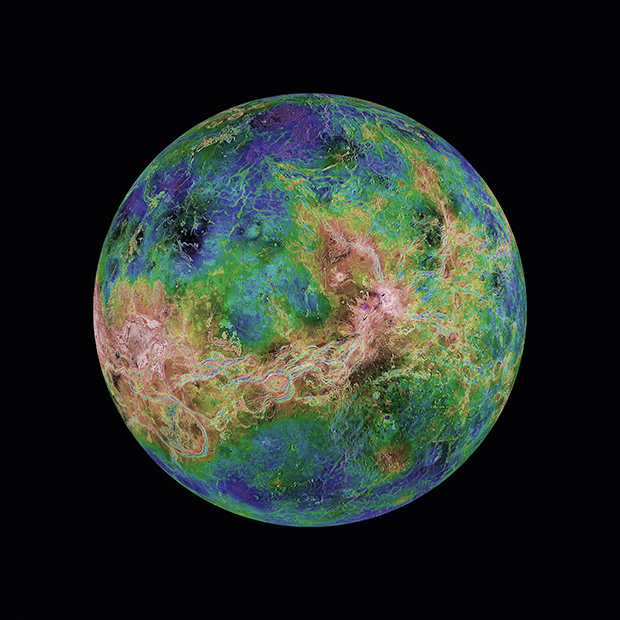 This colorful hemispheric view of Venus is the result of over a decade of radar investigations by the Magellan spacecraft, which was sent to the planet in 1990. Magellan’s photos eventually captured over 98 percent of the planet, and this mosaic of images (which includes imagery from the Earth-based Arecibo radar) is color-coded to mark elevations. Magellan’s images revealed that the surface of Venus is relatively youthful, somewhere between three hundred and six hundred million years old. Because Venus has no plate tectonics, it rarely experiences topographical shifts, and the planet is believed to completely resurface its crust once every few hundred million years. 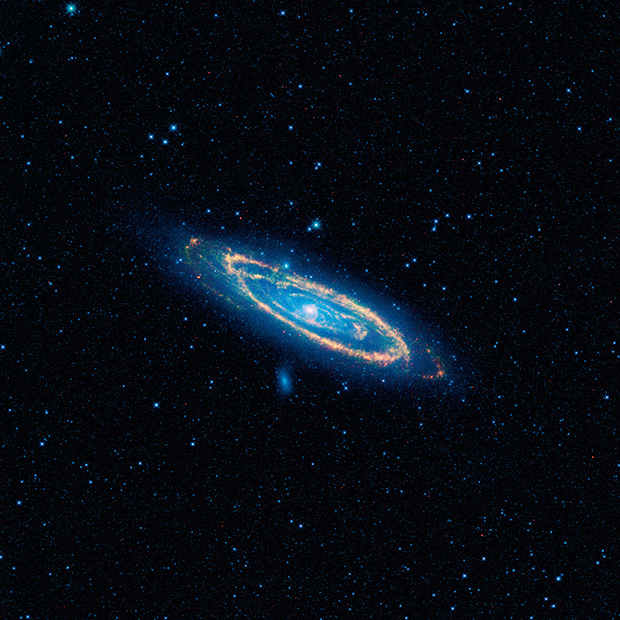 This image, taken by the Wide-field Infrared Survey Explorer (WISE) in 2010, shows the Andromeda Galaxy in an area equivalent to 5 degrees across the sky. In the galaxy, the blue areas highlight mature stars, while the yellow and red areas feature dust that is heated by massive newborn stars. We can also see two satellite galaxies in the image: Messier 32 (M32), the blue dot just above Andromeda, to the left of its center and almost touching the outer spiral arm; and Messier 110 (M110), the hazy blue oval below the central spiral of Andromeda. These are just two of the many galaxies tied to Andromeda by its gravitational pull. The Andromeda Galaxy and our Milky Way Galaxy belong to something known as the Local Group, a collection of over fifty galaxies that will eventually be mapped by WISE. 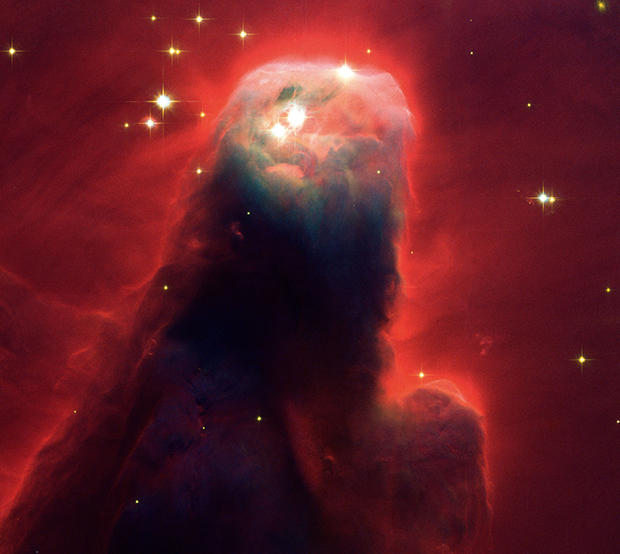 The deep red emanation pictured here arose from a swirl of dust and gas. The Cone Nebula, captured by the Hubble in 2002, resides in a highly active star-forming region 2,500 light years from Earth in the constellation Monoceros. The upper part of the nebula is 2.5 light years across—equal to twenty-three million round-trips between the Earth and Moon. The blue-white light from surrounding stars is reflected by the dense thicket of dust while ultraviolet light heats the cloud, causing it to glow red. Over time, only the densest regions of the Cone Nebula will remain, while the rest of the cloud will dissipate due to the ravages of stellar winds. 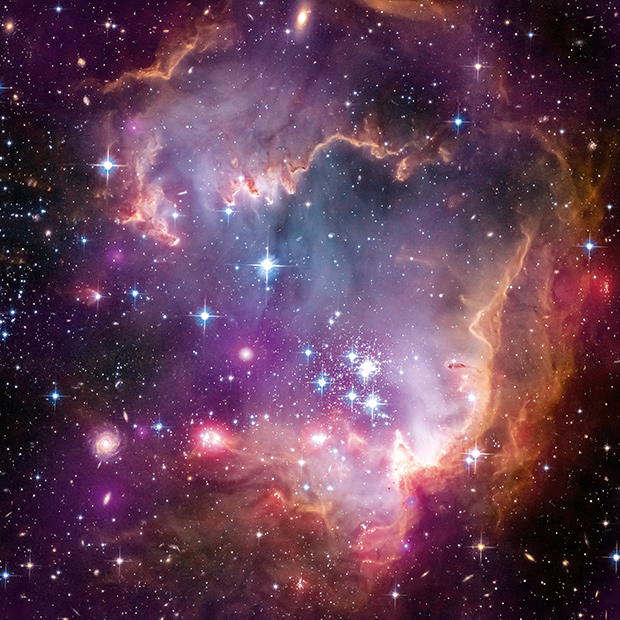 The Small Magellanic Cloud is a dwarf galaxy that flanks the Milky Way about 210,000 light years away from us, but it’s so bright that it can easily be seen from Earth in regions along and below the equator. During the time of New World exploration, the Small Magellanic Cloud was routinely used by seafarers for navigation. The Small Magellanic Cloud is considered a fragmentary galaxy, as it contains fundamental matter that is responsible for the formation of larger galaxies. Generally, such galaxies tend to be far away from us, so the proximity of the Small Magellanic Cloud gives us an unusual opportunity to observe the formation of larger galaxies and even of the universe. New Chandra X-ray Observatory data reveals low-mass stars, much like our Sun, emitting X-ray radiation. This 2013 composite image of the galaxy’s wing shows a region with stars containing fewer metals and less dust and gas than the Milky Way. The Chandra’s X-ray data is shown in purple, while visible data from the Hubble Space Telescope is shown in red, green, and blue. Infrared data from the Spitzer Space Telescope is also revealed in red. 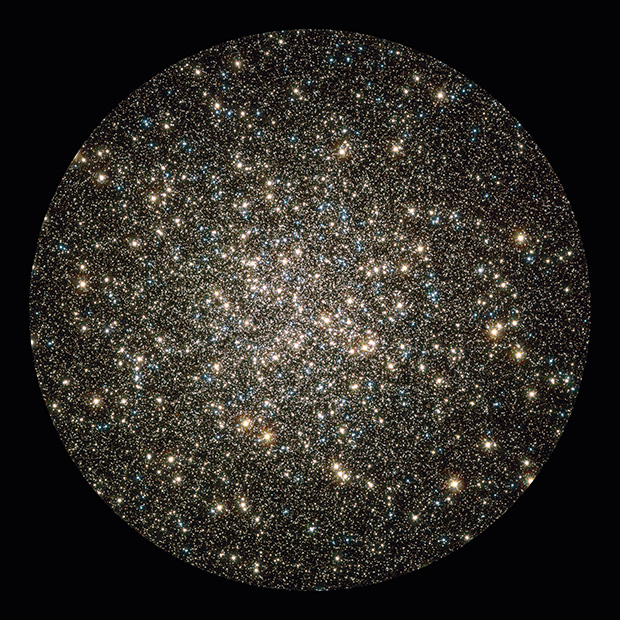 In this composite image from the Hubble Space Telescope, we see the globular cluster Messier 13, or M13, which is 25,000 light years from Earth. Situated in the constellation Hercules, the cluster is home to more than a hundred thousand stars, all grouped in a tight ball whose twinkling lights can be easily viewed in the northern sky. This spectacle is often compared to a giant snow globe or dense field of fireflies. The density of the area is due to a gravitational field so strong that the stars will remain in this clump for the rest of their lives. At the core of the ball, the star density is a hundred times greater than it is in other regions of the cluster—stars often collide here to form new stars known as blue stragglers, the hottest in the cluster. M13 is only one of nearly 150 globular clusters in our galaxy. Globular clusters tend to hold some of the universe’s most ancient stars, which probably formed before our galaxy. The image was created from data collected in November 1999, April 2000, August 2005, and April 2006.

All images and image captions from Earth and Space: Photographs from the Archives of NASA by Nirmala Nataraj, published by Chronicle Books, 2015