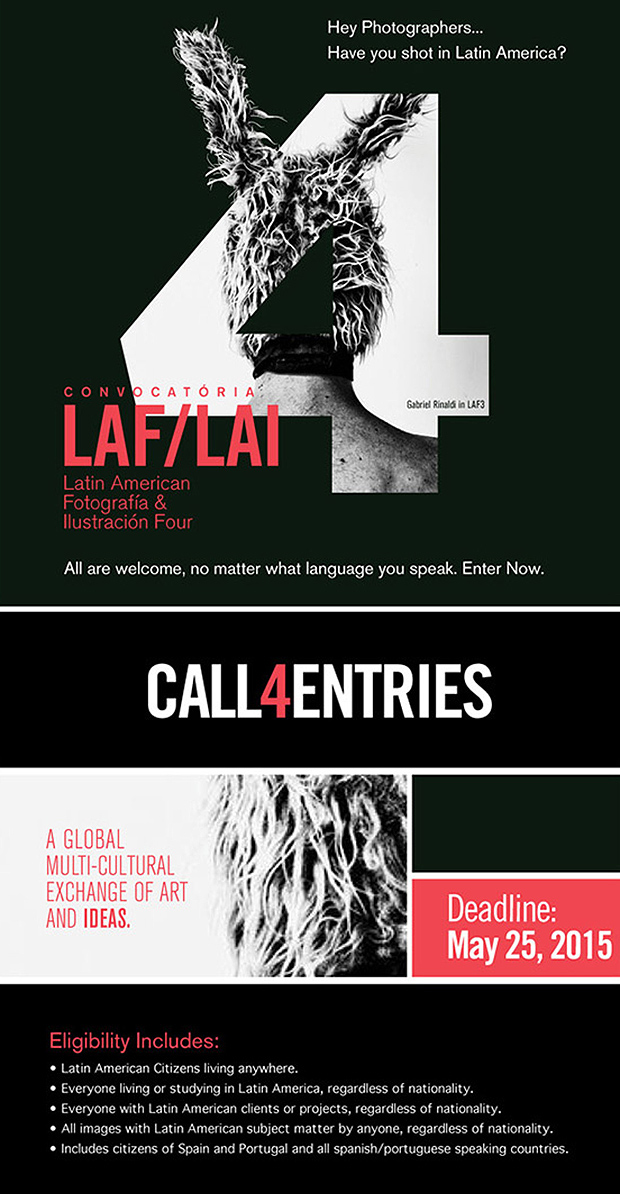 When we asked fifteen photographers to share their advice for making it in this industry, most of them responded that the key to success is to continue putting your work out there, get your images seen and your voice heard. American Illustration-American Photography’s Latin American Fotografía and Ilustración, now in its fourth year, gives photographers, illustrators, educators, and agencies based in Latin America— in addition to those who do not live in but who have shot projects in, been published in, or exhibited in Latin America—the perfect opportunity to do just that.

AI-AP is internationally recognized for putting together some of the most prestigious juried competitions throughout North America, and Latin American Fotografía and Ilustración 4 promises to introduce some of the most promising voices of Mexico, the Caribbean, Central and South America to the leading art directors, buyers, publishers, and photo editors of the North American market. The esteemed international jury is composed entirely by industry leaders who work closely photographers and illustrators, spanning the fields of publishing, curating, editing, advertising, and more. Reportage, commercial, fine art, or unpublished images are all welcome, with submission categories in areas as diverse as Editorial, Advertising, Unpublished, Books, Packaging, Posters and Monographs, and Student, which is open to both full and part-time undergraduates and graduate students.

Winners of Latin American Fotografía and Ilustración 4 will have their images shown online as part of the AI-AP Archive at ai-ap.com and internationally as part of a traveling exhibition showing in venues across Latin America and in Brooklyn, New York as part of Photoville 2016, a major event expected to draw millions. Selected images will also be presented as part of a discussion at AI-AP’s Big Talk Symposium, which will take place at New York’s School of Visual Arts in November along with a gallery show entitled LOS DIEZ, which will premiere during the yearly American Illustration-American Photography launch party. Latin American Fotografía and Ilustración 4 winners will also be published in numerous art and design publications, including AI-AP’s Latin American newsletter Dispatches and AI-AP e-books (sold on iTunes), and will be featured in a slideshow announcement mailed to 30,000 email subscribers around the world.

Deadline for submissions is May 25, 2015, and the winners will be announced in September 2015. Latin American Fotografía and Ilustración 4 is sponsored by United Photo Industries, Epson, CASATINTA, and SVA. Submit today!