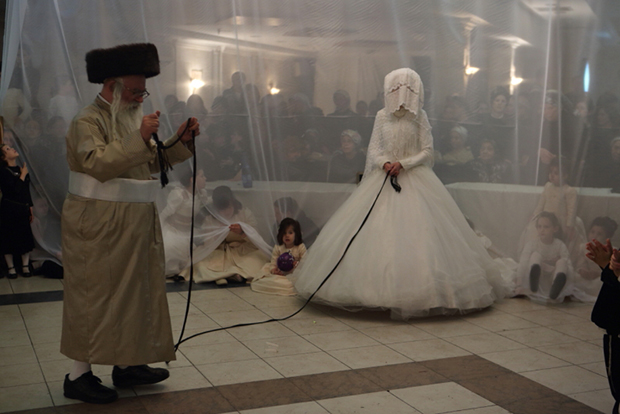 A strictly Orthodox rabbi dances the “mitzvah tantz” at the wedding of his grand-daughter in the central Israeli city of Bnei Brak. The “mitzvah tantz” is a dance ritual in which the Rebbe and the fathers and brothers of the groom dance around a rope with the bride. Each holds one side of a rope so as not to touch the bride, because according to the Jewish holy Torah, it is prohibited to touch a woman to whom you are not married. 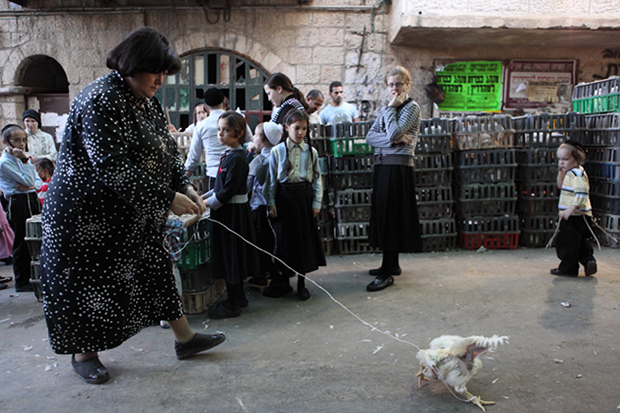 A Jewish woman walks a chicken before the Kaparot ritual, where the chicken will swung over one’s head. It is believed that the sins of the past year are then transferred into the chicken. In the strictly Orthodox neighborhood of Meah Shearim, the ritual is performed before the Day of Atonement, Yom Kippur. The chicken is later killed and given to charity. 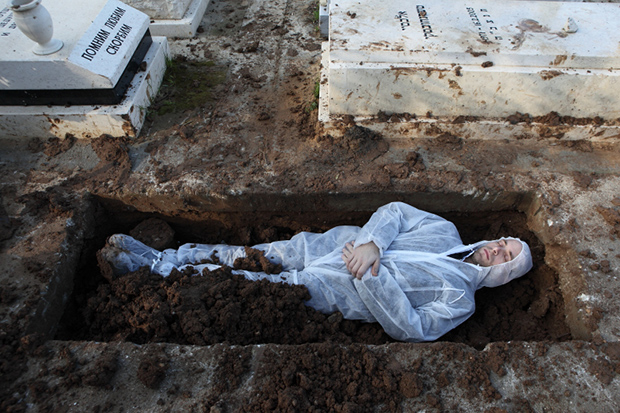 A strictly Orthodox Jewish man lays in an open grave after a body was taken out of it. This practice is said to lengthen one’s own life expectancy.

In a recent body of work, the photojournalist Yaakov Naumi sheds light on the rituals of the Haredi Jewish community in cities like Jerusalem and Bnei Brak, where daily life is conducted according to strict Orthodox adherence to Jewish law.

Naumi himself was raised in a Haredi home and taught at Haredi schools; he studied sacred texts at yeshiva. When he took a position photographing for Behardrey Heredim, a major international media outlet devoted to Haredim news, his view on the familiar traditions began to shift. Even though he had been intimately acquainted with most of the rituals he was sent to shoot, some were new to him.

Working for a worldwide press, Naumi began to observe events as an outsider would. His goal became inspiring others to seek a deeper understanding of his subject’s lives and rituals. The people Naumi met and photographed were often hesitant to permit him to join them with his camera, but ultimately it was his inherent understanding of their customs that opened doors. Sometimes, he was invited in without having asked first.

The photographer continues to make these images in hopes that they will raise discussions and spark interest from members of the outside world. In the end, he says, his photographs are about sharing “my culture, their culture, our culture.” 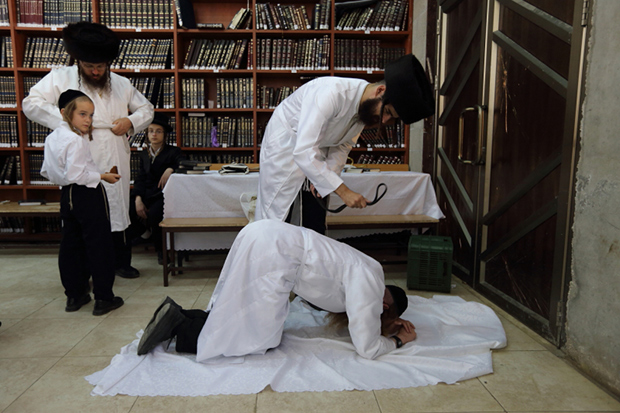 A strictly Orthodox Jew of the Lelov Chassidic dynasty whips another strictly orthodox man with a leather strap as a symbolic punishment for their sins as they perform the traditional Malkot ceremony in a synagogue in the town of Bet Shemeshm a few hours before the start of Yom Kippur. Yom Kippur, also known as the day of Atonement, is the most solemn of the Jewish holidays. The central themes are atonement and repentance. It is observed by a 25 hour fast and intensive prayer. 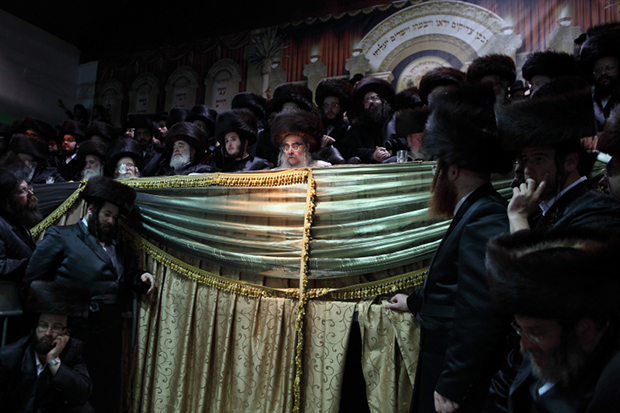 Strictly Orthodox Jews gather for the traditional Jewish wedding of Chananya Yom Tov Lipa, the great-grandson of the Rabbi of the Wiznitz Hasidic followers, in the town of Bnei Brak. 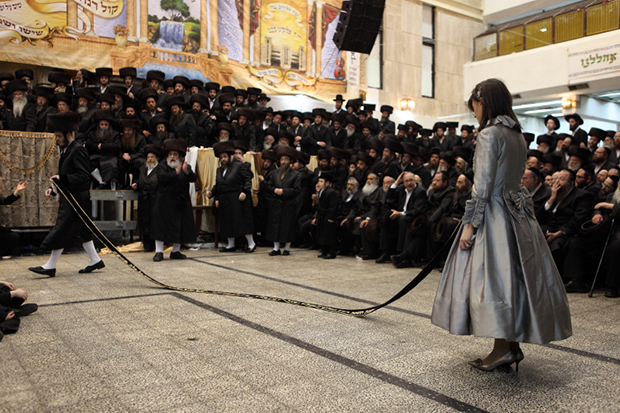 A strictly Orthodox bride and groom dance the night before they are to be wed. 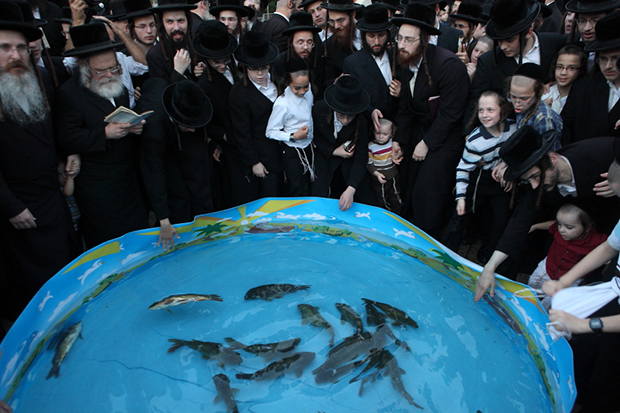 Strictly Orthodox Jewish men of the Hasidic dynasty perform the Tashlich ritual beside a fish pool. Tashlich, which translates to mean ‘to cast away’ in Hebrew, is a ceremony in which Jews visit body of water and symbolically ‘throw away’ their sins by throwing a piece of bread, or similar food, into the water prior to Yom Kippur. 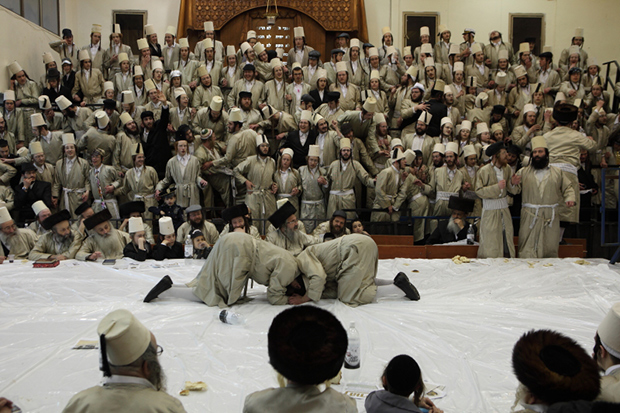 Strictly Orthodox Jewish of the Chassidic ‘Toldot Aharon’ dynasty men dance on a table as part of a “tisch” (yiddisch word for table) ceremony during the Jewish holiday of ‘Purim’, in the Meah Shearim neighborhood of Jerusalem. The festival of Purim commemorates the rescue of Jews from genocide in ancient Persia. 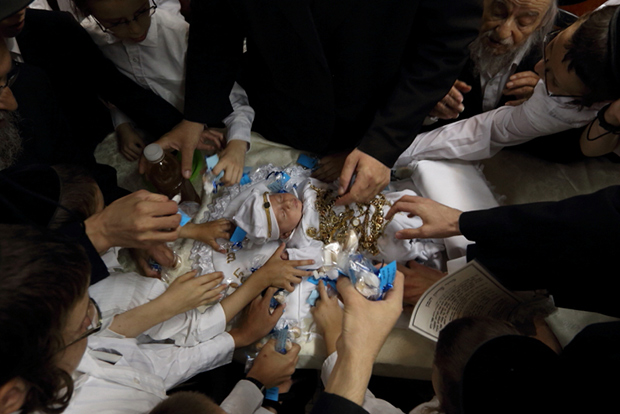 The traditional Jewish custom of ‘Pidyon haben’, the redemption of the first-born son, in the city of Bnei Brak. The ceremony is also known as buying the first born son for five silver coins, and takes place when the baby is 31 days old. The custom is for the father to redeem the baby, who must have been born by natural means, as he buys the child from a Kohen, a member of the high priests from the ancient temples in Jerusalem, for five silver Shekels. 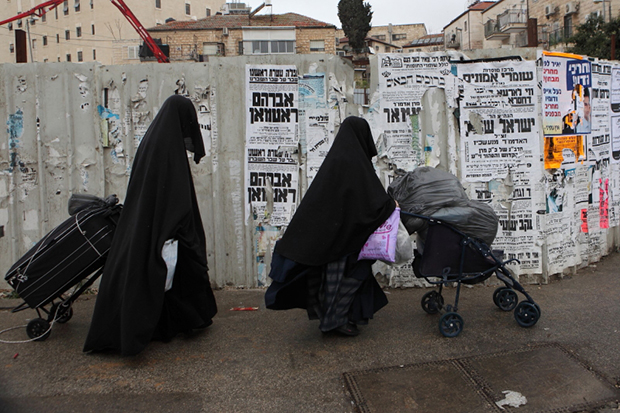 Strictly Orthodox Jewish women wearing full covering as a means of modesty walk through the neighborhood of Meah Shearim. 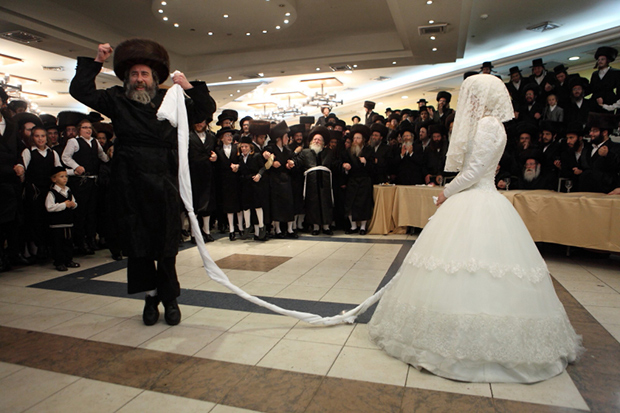 The rebbe seen with the bride during the “Mitzvah Tantz” dancing ritual at a wedding. 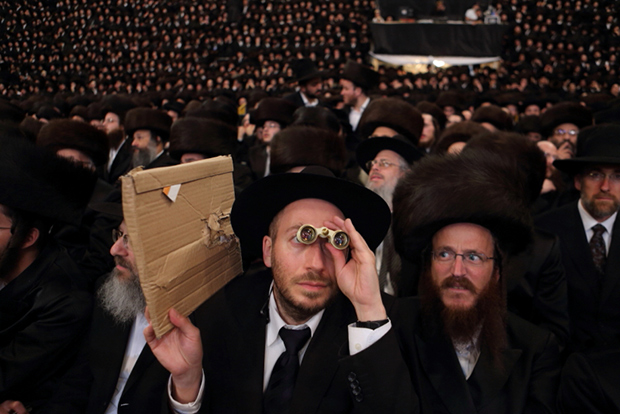 Tens of thousands of Strictly Orthodox Jews of the Belz Hasidic Dynasty take part in the wedding ceremony of Rabbi Shalom Rokach, the Grandson of the Belz Rabbi to Hana Batya Pener. 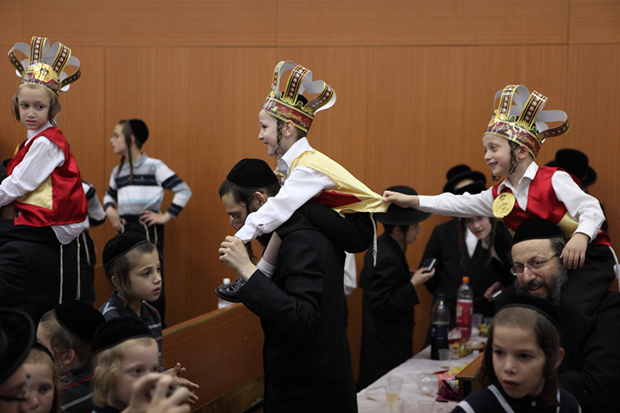 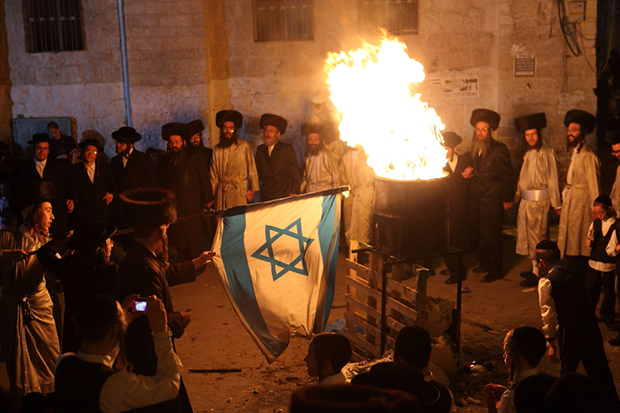 Strictly orthodox Jewish men and children set the Israeli flag on fire at a bonfire during celebrations of the Jewish holiday of “Lag Ba’Omer” in the ultra orthodox neighborhood of Meah Shearim in Jerusalem. “Lag Ba’Omer” commemorates the death of Rabbi Shimon Bar Yochai, one of the most important sages in Jewish history 1800 years ago. The most well-known custom of Lag BaOmer is the lighting of bonfires throughout Israel and in Jewish communities worldwide. 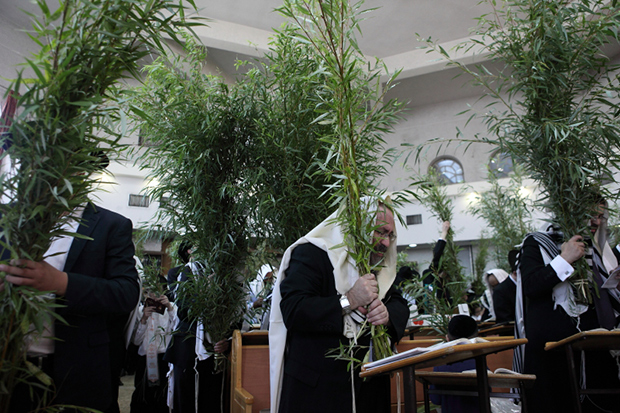 Strictly Orthodox Jewish men covered with prayer shawls hold the four plant species – palm leave stalk, citrus, myrtle and willow-branches, as they take part in the ‘Hoshana Rabbah’ prayer (on the last day of the Jewish holiday of Sukkot) at the Slabodka yeshiva, in Bnei Brak. 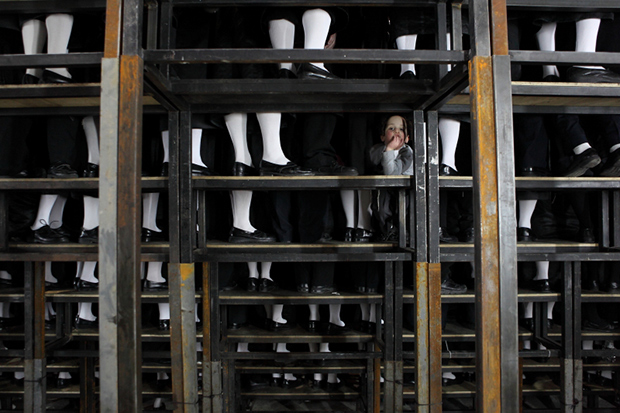 A young boy peers through the stands where strictly Orthodox Jews gathered for the traditional Jewish wedding of Chananya Yom Tov Lipa, the great-grandson of the Rabbi of the Wiznitz Hasidic followers, in the town of Bnei Brak. 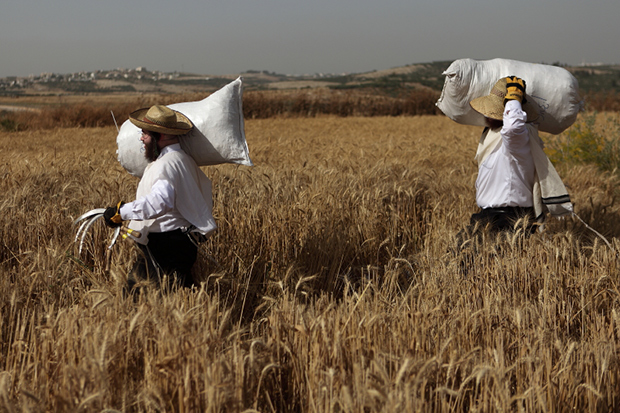 Strictly Orthodox Jews follow an ancient Biblical command and harvest wheat with a hand sickle in a field near the central Israeli town of Modi’in. They will store the wheat for almost a year and then use it to grind flour to make unleavened bread for the week-long Jewish holiday of Passover. 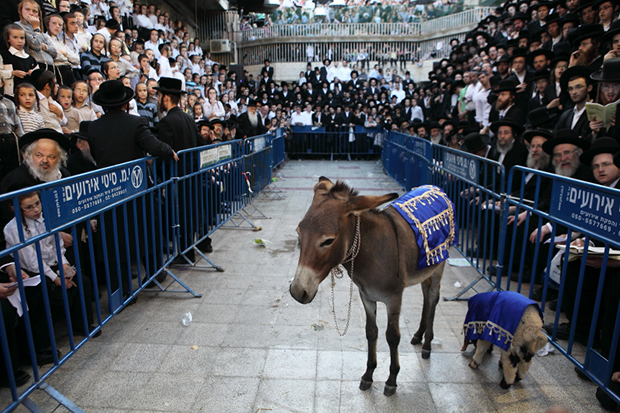 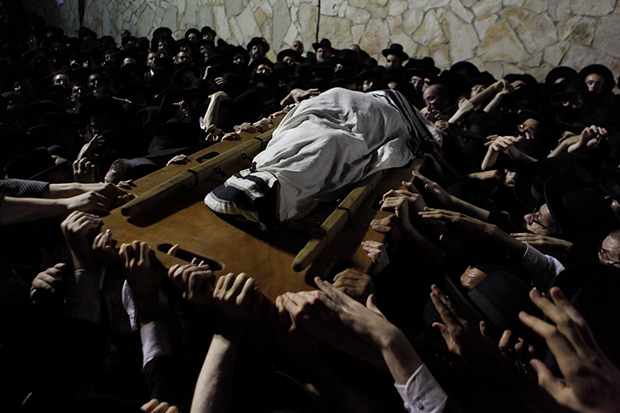 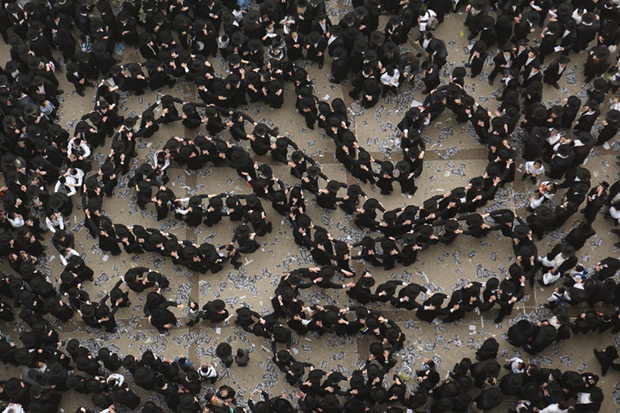 Strictly Orthodox Jews seen dancing at a massive protest attended by hundred of thousands in Jerusalem, against a proposed plan formed by the Israeli parliament to introduce compulsory military service to the Haredi community.