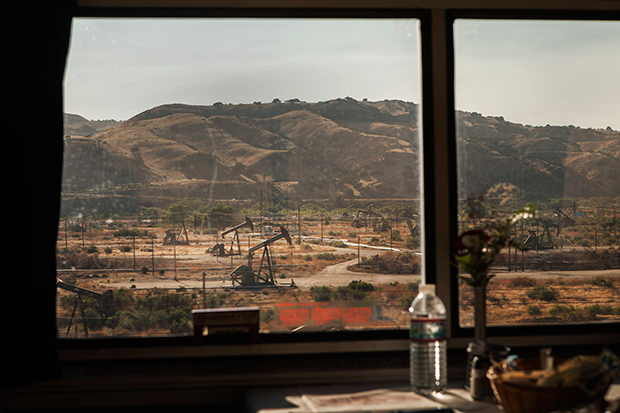 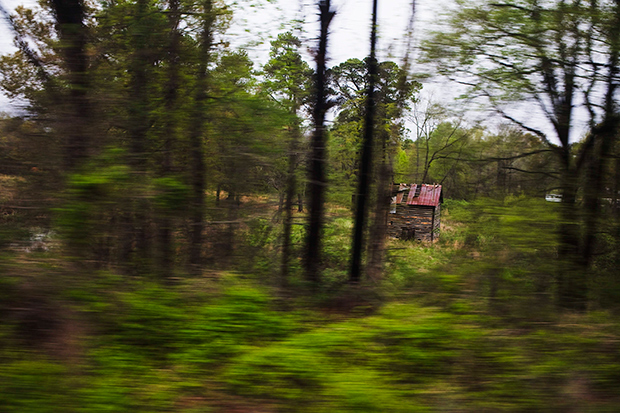 Shack in a forest in North Carolina © Stacey Evans / Offset

For Trainscapes, Charlottesville, Virginia-based photographer Stacey Evans captures the elusive American terrain through her railway window, settling on small moments that exist in the periphery of her vision as she speeds past.

As a passenger and photographer, Evans occupies an uncertain space between control and powerlessness, constructing compositions that are inherently unpredictable. Rather than surrendering to the ennui of a long train ride, she transforms each journey into an opportunity for discovery. Instead of dividing her from the outside world, the passenger window becomes a channel by which she connects with and becomes intimate with her surroundings, regardless of how quickly they might pass from view. Her blurred scenes walk the line between documentation and poetry, becoming moments of surveillance tinged with romance. We spoke with Evans about the project.

What inspired you to shoot America through your train window?
“Since learning about Robert Frank’s The Americans, the Farm Security Administration photographs,and Frank Gohlke’s grain elevators, I was always in the search for my own vehicle to photograph America. I grew up in the Shenandoah Valley with mountains on the east and west side of my vista. The valley is a big open space with coal travels and a passenger train that pass through daily. The train has always been present in my life, but it was not until my late 20s that my view switched from outsider to a passenger.

“The growth of the project was gradual. In 2007, I decided to ride to West Glacier, Montana on the Cardinal and Empire Builder routes. My first overnight train adventure, first time in a sleeper car. I was doing two things on that trip, testing out my now husband for compatibility and looking at power lines, and how this line flows through the changing landscape. We were stopped in Cincinnati in the middle of the night, there was an amber glow out the window and muted noise. I was unclear what was happening, maybe an engine change, maybe a robbery… In my earplugs, I was listening to Laurie Andersen singing ‘This is the time. And this is the record of the time.’ This was my project; this was my perspective.”

Do you go on these trips specifically to shoot, or are you traveling with a destination in mind?
“I started taking the train because I did not like driving long distance. Now, I travel to shoot with specific routes and seasons in mind. I have not been on a train for over a year now.  I’m regrouping, seeing if I want to make any changes.  Proving to myself I can make images off the train. I do miss it, and have the next trip in mind but just have not set it in motion.”

What landscapes appeal to you?
“Man-altered landscape. I’m interested how we occupy, shape and transform the land for our use. We use bulldozers to make it accommodate us. We abandon structures for something new and better.  This visually changes from region to region.  America is big, the geographical differences influence the topography. You know, there is more rust in the east than the west coast. The landscape photographs that stand out to me are the ones with quiet narratives about how we co-exist with the earth.” 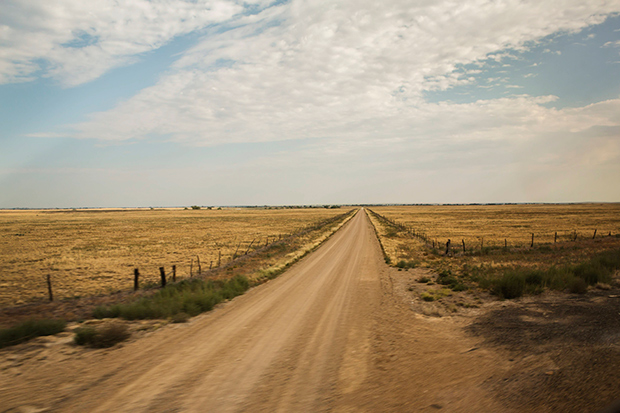 What are some of your favorite states to travel through?
“I don’t pick favorites. They all amaze me. I imagine what a state will look like before I start, but am always surprised when I ride. Not only are there geographic differences, but the days and seasons are different as well. It might be raining or just after a snow, there are so many things out of my control. I learn to accept what is presented to me. A few of my favorite experiences are train sounds going up mountains and down mountains, waking up to hay bales on a misty morning, watching dusk come while the train snakes through the land. I mentioned riding with head phones, but now I just ride in silence so I can hear the ambient sound.” 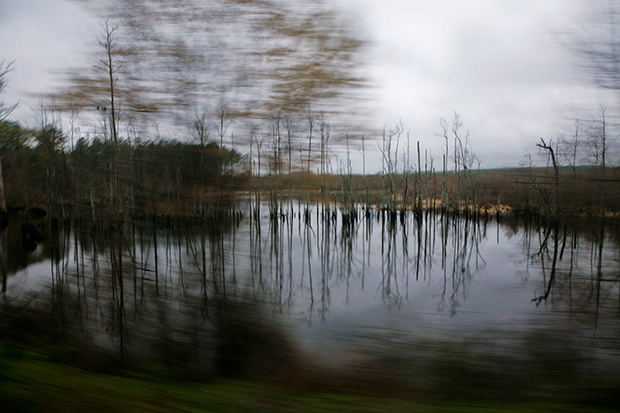 What moments catch your eye as you ride past?
“When to push the shutter, I look for personal connections, intersections, relics, light in a dark night. One moment that caught my eye but the camera did not was a shirtless man coming out onto his balcony waving his arms. We were near the Colorado/New Mexico boarder. A pretty desolate area. I think about his man and his life. My impression is he waved at the train everyday. Some days the cross country trains are on time; on others, they surprise you. He surprised me. At that moment, everything is moving so fast. It’s hard to focus on a singular figure. People are the hardest to capture, depending on the distance from the train. We are tiny figures in the universe.” 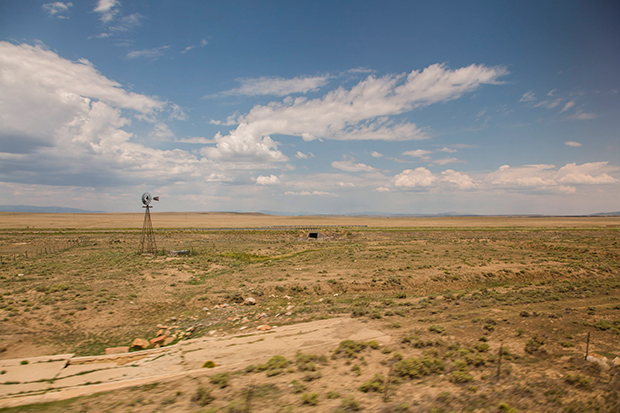 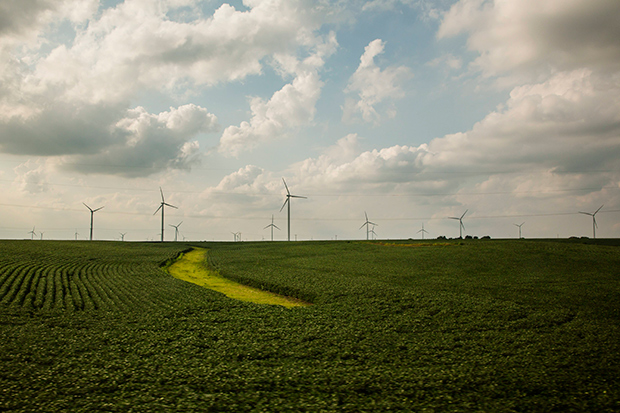 Has this project changed the way you approach landscape photography at all?
“Right now, I cannot stand still outside and make a landscape photograph. Riding on the train is a bit like watching a silent movie. You can only wonder about the content. You never truly know the full story. There is a lot of speculation and personal experience reflecting what you see. When I walk through the landscape these days, I’m preoccupied with my daily life. When I am on the train I am intensely focused on what is passing.” 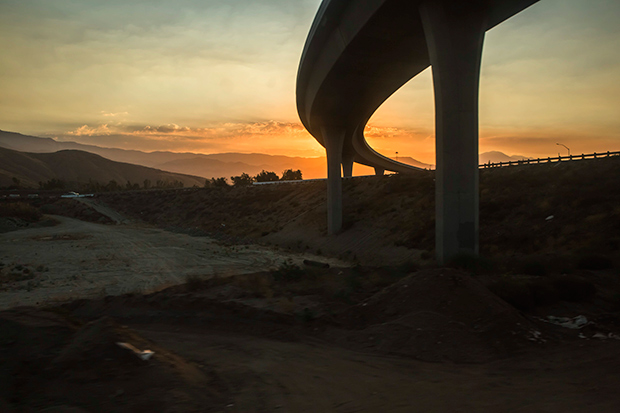 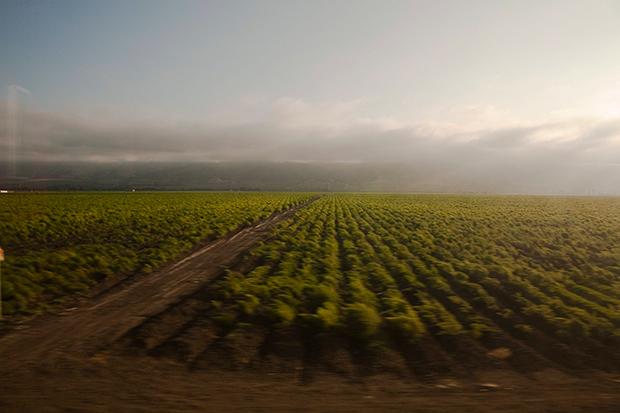 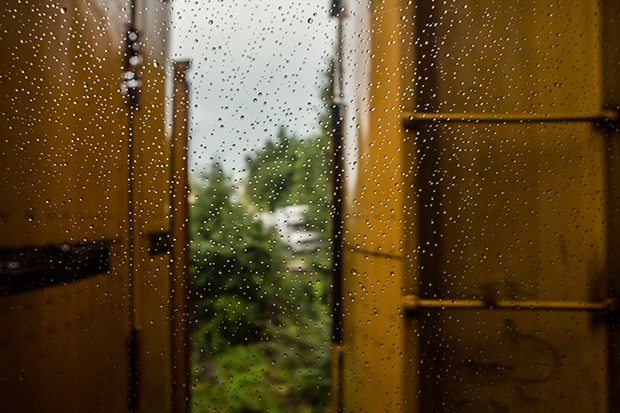