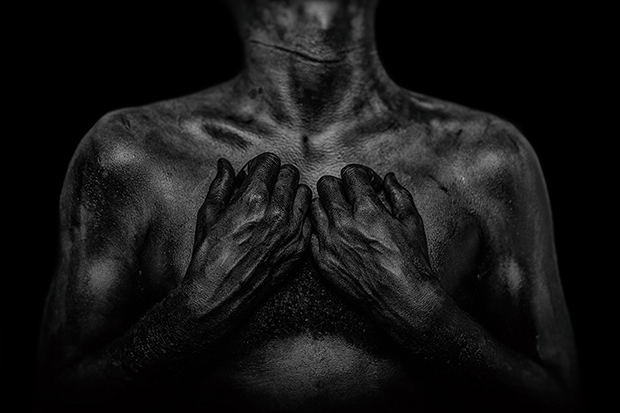 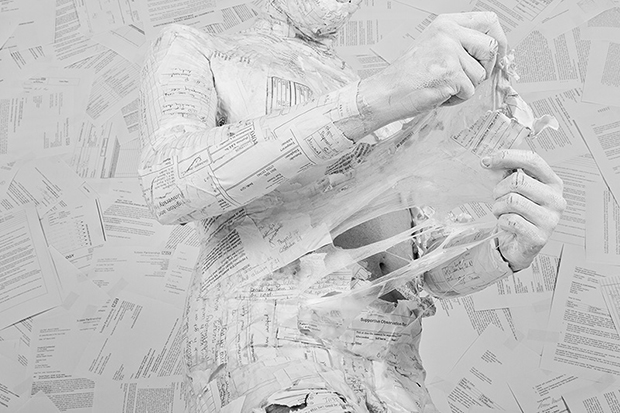 For Fragmentary, London-based photographer Daniel Regan visualizes the tensions, contradictions, and isolation of mental illness through a series of self-portraits. In these pictures, he has incorporated his own medical records, exhumed from the archives of the Brighton & Hove mental health services.

In the sixteen years that the artist has been under the care of the United Kingdom’s mental heath services, beginning in adolescence, he has endured not only the ebbs and flows of mental illeness but also misdiagnoses, funding issues, and inappropriate treatments from a diverse array of doctors working for different subsections of the country. Only after ten years in the system was he was given an accurate diagnosis and a helpful treatment plan.

After years of struggling to communicate with clinicians, Regan’s curiosity was piqued, and he wondered what his therapists gathered from their meetings. In exchange for a small fee, the medical records were released to him, arriving at his doorstep in a simple brown envelope.

Following the dates on file, he returned to his own photographic documentation of himself in times of crisis. For more than a decade, he has been chronicling his own relapses and recoveries through portraiture. By reflecting in this way, he has been able to return to himself, to his body, and to accept the realities of living with a chronic disorder.

For Fragmentary, he disrupted these personal images by digitally manipulating the code of each JPG, setting the medical notes, forms, and records, in conflict with his own perception of his self. In each frame, the perspectives of the patient and the clinician collide, creating not only moments of acute discord but also unexpected instants of connection, agreement, and understanding. The artist and his doctor, operating from two mindsets that are at once flawed and legitimate, touch on those rare points of recognition amidst an uncertain landscape of alienation and misunderstanding.

For Regan, the project “walks the fine line of oversharing and undersharing,” including vulnerable insight while redacting pieces of sensitive information. Ultimately, we are each able to insert ourselves into a narrative in which the protagonist is both identified and anonymous. “If it can help just one person open up about their mental health difficulties then it’s provoking a much needed dialogue and discussion,” the artist says. 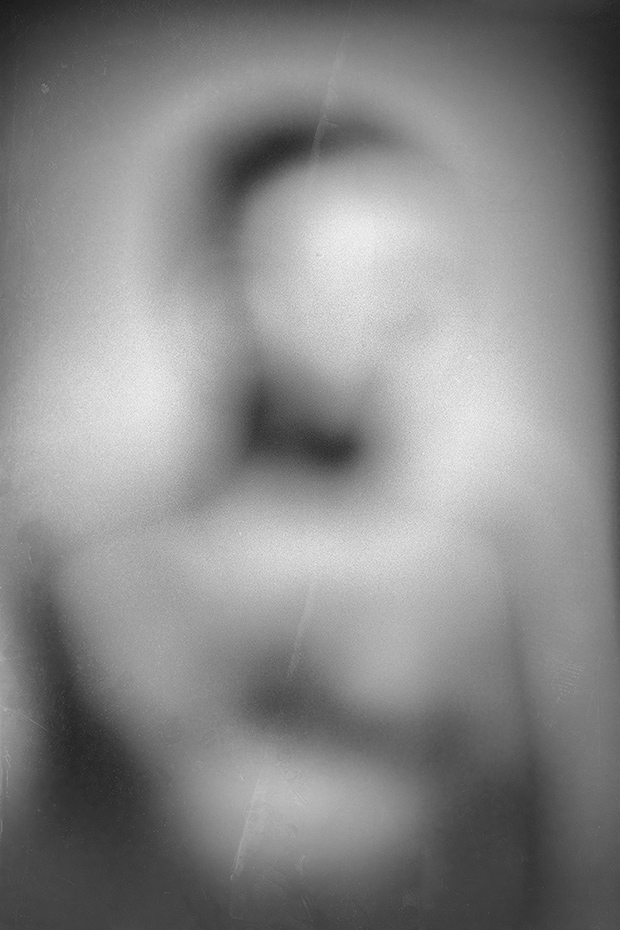 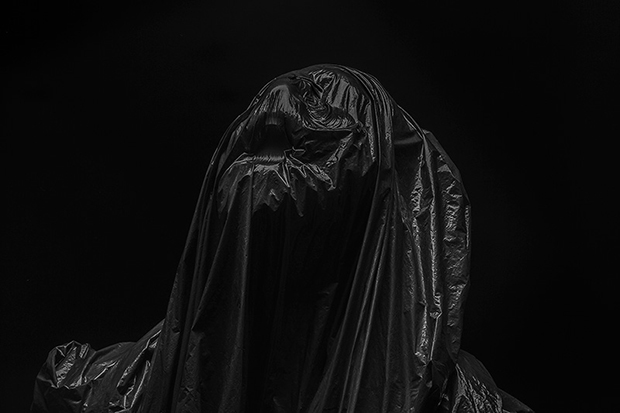 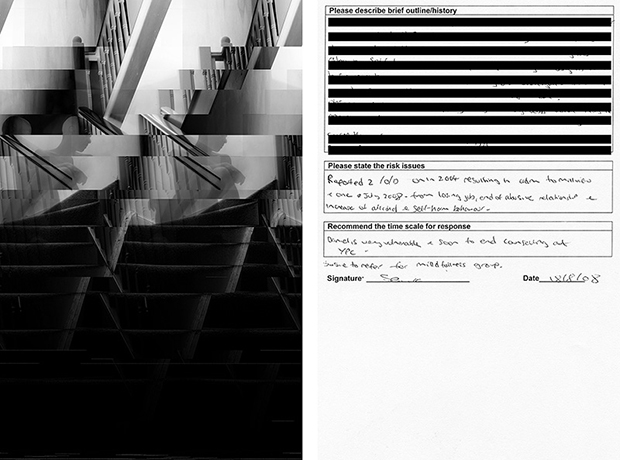 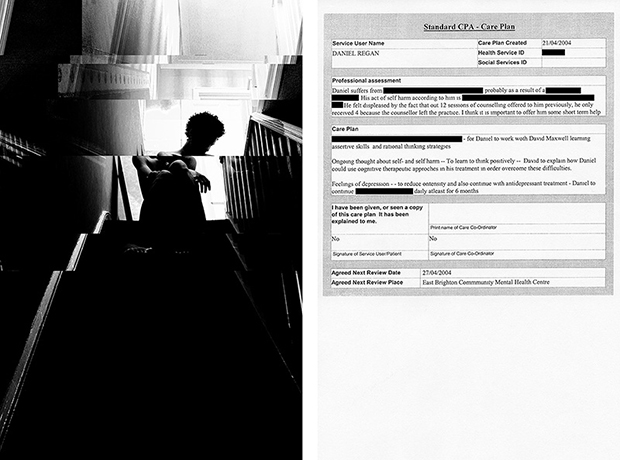 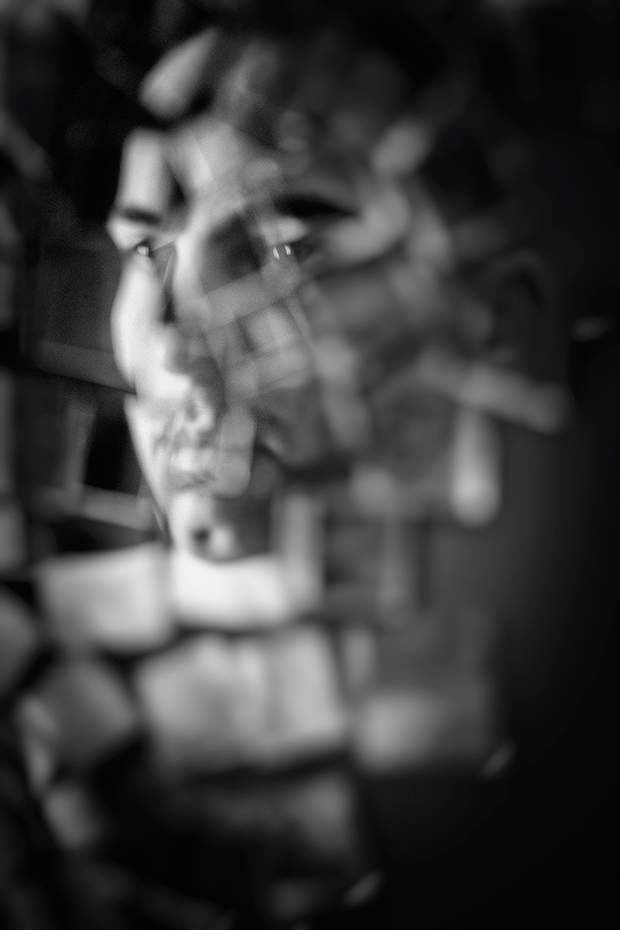