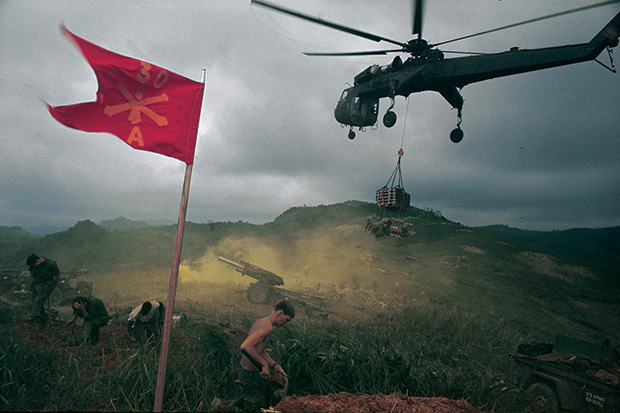 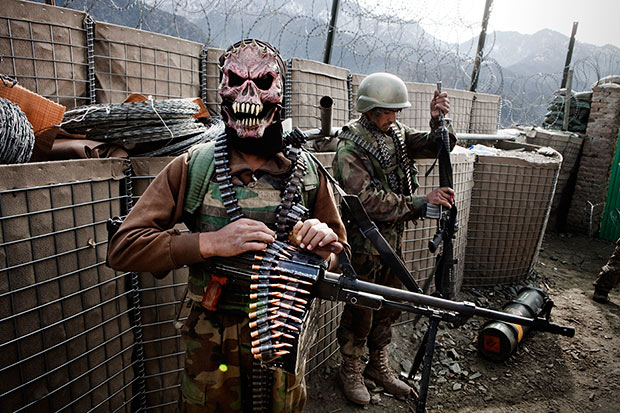 A successful commercial photographer as well as conflict photographer, curator Sebastiano Tomada Piccolomini spoke with us about the timeliness of the exhibition and what drives him, as well as other war reporters, to risk it all. 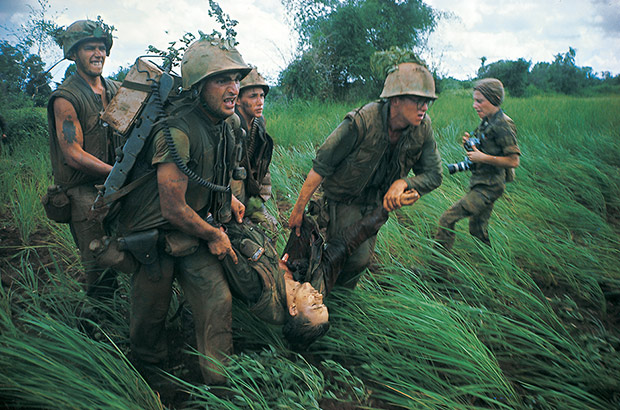 Near the DMZ, South Vietnam, October 1966: Marines recover comrade. Four U.S. Marines recover the body of a comrade under fire.  [On the right: French photographer Catherine Leroy, who had flown in on a supply helicopter.]  © Larry Burrows / Time Inc.

What inspired this exhibition and the title ‘A Form of Love’? What do you hope audiences will take away from this exhibition?
“We wanted simply to raise awareness and showcase what conflict photographer’s experience. A Form of Love – An Exhibition of Contemporary Conflict Photography is partially a tribute to the deep bond between photographers and their subject matters. The two words ‘love / conflict’ may at first seem an oxymoron, but instead they become the community’s founding basis. In the zine for the show, there is a quote from the book called War (2010) by journalist and writer Sebastian Junger, ‘The willingness to die for another person is a form of love that even religions fail to inspire, and the experience of it changes a person profoundly.'”

War photographers have a difficult and often dangerous job where they must risk their lives on a daily basis. What keeps them going despite it all?
“Passion and challenge are what drives us the most. What keeps us going back is the golden question. My first experience in a war zone was in Afghanistan in 2009 while embedded with U.S. Army forces in the province of Kandahar, one of the birthplaces of the Taliban. It was one of my first major assignments in a kinetic environment. I would find myself returning every year until 2013. The war in Afghanistan became very close to me after experiencing it: I witnessed the death of two soldiers of the 101st Airborne whom I had become friends in the summer of 2010. War becomes a personal experience, and everyone is affected in a different form.” 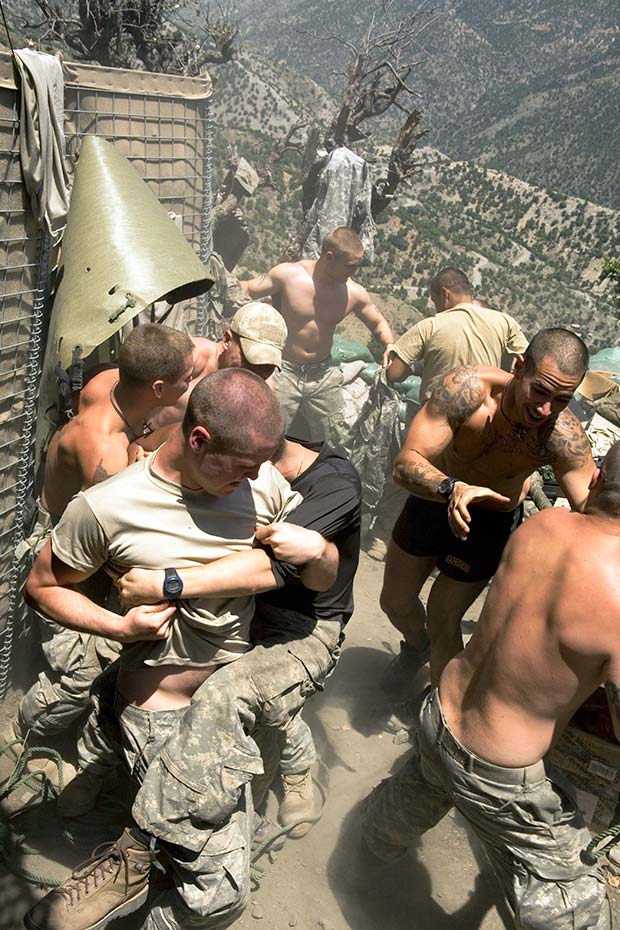 Korengal Valley, Kunar Province, Afghanistan, June 2008: Men of Second Platoon have an inter-squad fight at the Restrepo outpost. Boredom is a constant companion as men wait for fighting. © Tim Hetherington

What should the general public be aware of regarding the men and women who report and photograph in war zones?
“Numbers speak for themselves: from 1992 to the present day, 1080 journalists were killed, 40 in 2014. Among them was Italian photojournalist Andrea Rocchelli who died at the age 30 in Ukraine, as well as Isis’ barbaric beheading of James Foley and Steven Sotloff, in Syria.

“The work of reporters has changed radically in the past years. A publishing crisis has brought on a transition towards the web with consequent slashing of the budgets newspapers dedicated to sending mostly freelance journalists to conflict zones. This often implies no insurance, nor help from editors and less authority. To top it all off, conflicts have degenerated, starting with the Bosnian one, which saw reporters’ work conditions worsen. These men and women often become a terrorist target from the moment individuals understood that images can be used for propaganda.

“With no editors and institutional figures to protect the reporters who are risking their life to come up with stories from around the world, there is a community of photojournalists who have offset this, becoming more and more a sort of family extension; a community bound by deep ties that can only come from sharing such intense life and death experience as that of war zones. This underlying force is what propelled me to organize, along with Jordan Sullivan and Aaron Stern, an exhibition and a limited edition book to raise funds dedicated to the Tim Hetherington Trust and the James W. Foley Legacy Fund.” 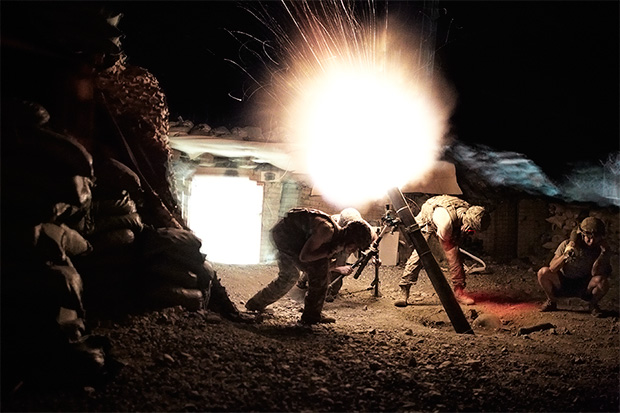 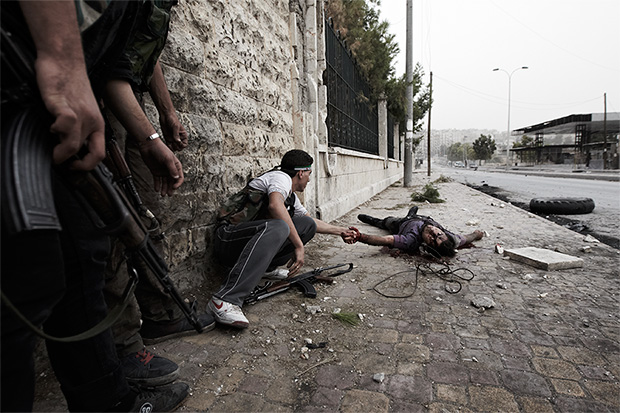 Aleppo, Syria, October 21st, 2012: Free Syrian Army fighters attempt to save the life of a civilian severely wounded by a Syrian Army sniper along one of Aleppo’s front lines. © Sebastiano Tomada / Reportage by Getty Images

The curation features 10 different photographers, all of them men. Were there no women that came to mind for this exhibition?
“That’s a good question. We just did not have any answers from some of the female photojournalists we contacted and we were on a tight deadline. So it just happened that we had 10 male photographers. This has been a very challenging show to organize. Most photojournalists were on assignment in remote areas of the world and impossible to reach. We will be having a second show with the same subject matter and we have three female photographers that will be participating then.”

Will the book be available for purchase elsewhere besides the 205-A Gallery?
The book will be available at the IPC book store and at Dashwood Books in NYC. Depending on the success of the show we will print more copies and have them in other locations for sale. 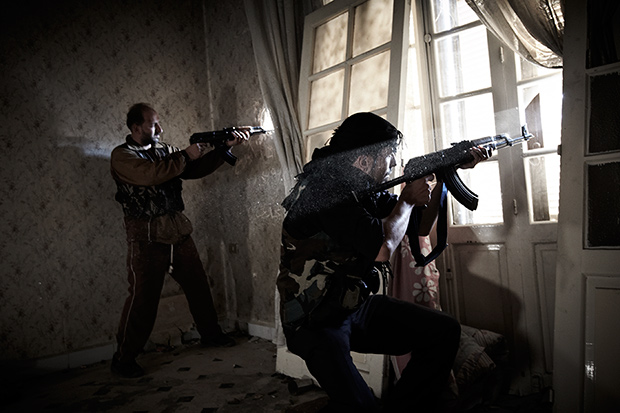 Aleppo, Syria, September 25, 2012: In Aleppo, members of the Free Syrian Army find cover inside of a building during a firefight with Bashar Al Assad forces. © Sebastiano Tomada / Reportage by Getty Images 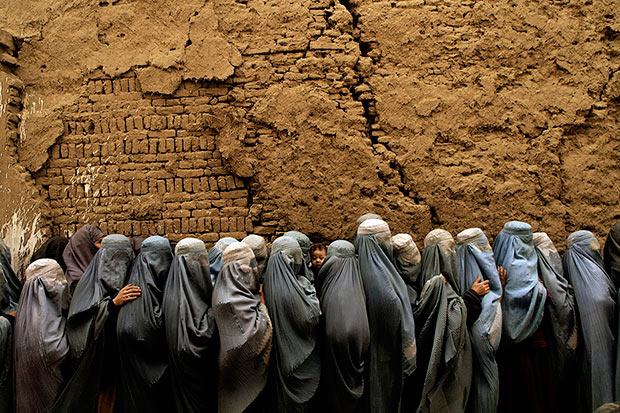