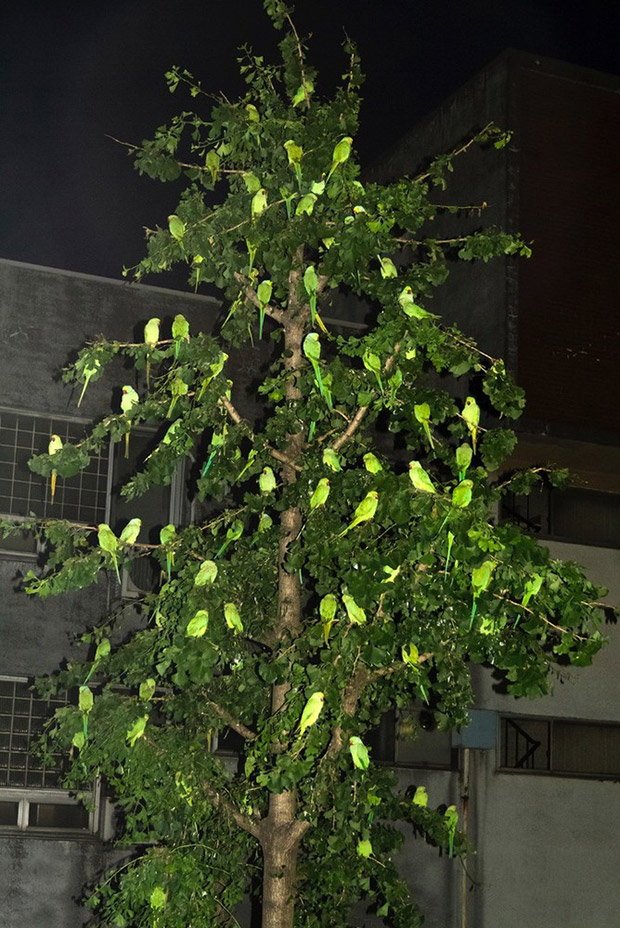 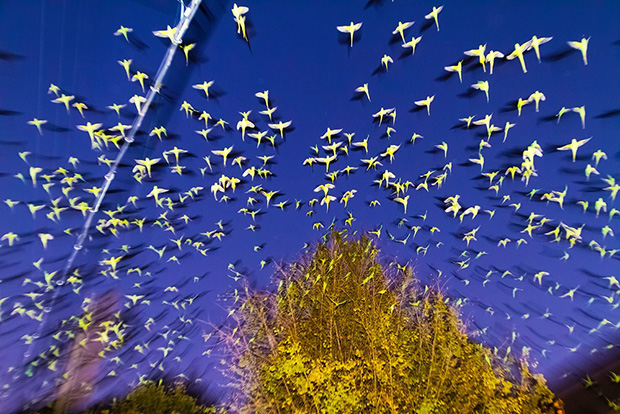 “Parrots should not be in Tokyo,” writes photographer Yoshinori Mizutani of the hundreds of green parakeets that have nested in the city’s trees. He’s right: the birds are not native to Japan. They arrived in the 1960s and 1970s as part of the country’s trend toward purchasing exotic species as pets. The rose-ringed parakeets were brought in from their natural habitats in India and Sri Lanka, and when their owners found them too loud and unsuitable for domestic life, they simply let the creatures loose in the city to fend for themselves. Some of the birds were lost or broke free during importation.

The Japan Times reports that the Tokyo parrots are likely all part of a single network based near the Tokyo Institute of Technology, but their range is surprisingly vast, and they can travel for large distances to find food. The Japan Society for the Preservation of Birds is in the process of monitoring and tracking their patterns. Each night, the birds come to roost in the trees surrounding the university, with hundreds of birds perching together on a single tree. For safety, they take turns sleeping while their fellows keep watch for birds of prey. Despite the research of the university and JSPB, the neon-hued parakeets remain shrouded in a great deal of mystery; their diet is largely unknown, and it is difficult to determine how they may be effecting other bird populations.

Mizutani was struck with a pang of terror when he first came into contact with the parakeets, whose massive numbers reminded him of the 1963 Hitchcock classic The Birds. In Tokyo Parrots, he highlights the eerie unnatural atmosphere that follows the birds, setting their bright feathers against an ominous night sky. Ceasing to be objects of scientific curiosity, they emerge as frightful yet alluring beacons from some alien planet, bringing with them a potent spasm of uncertainty. 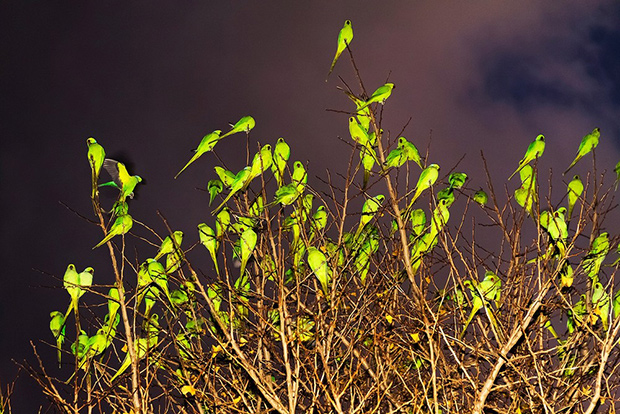 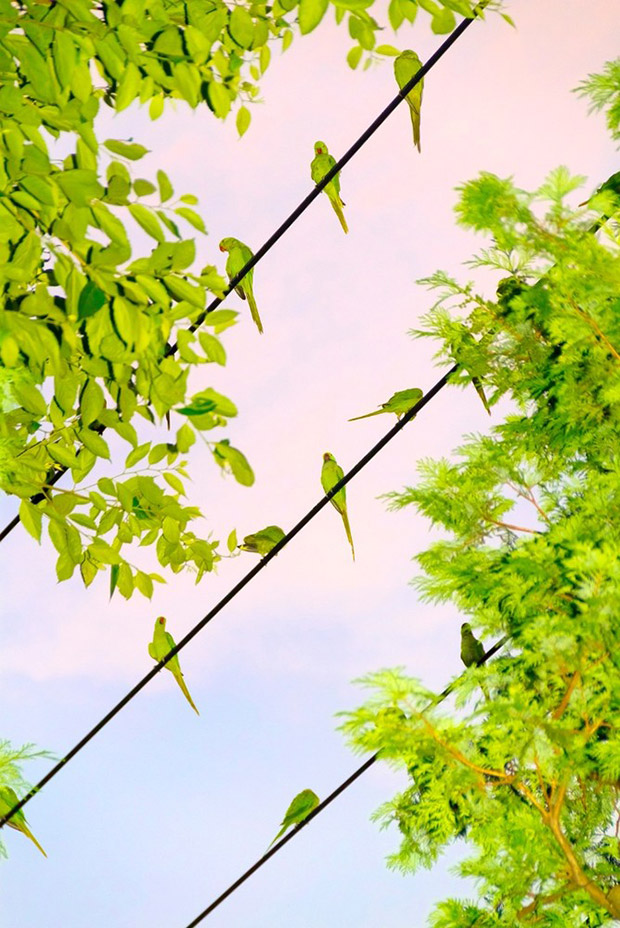 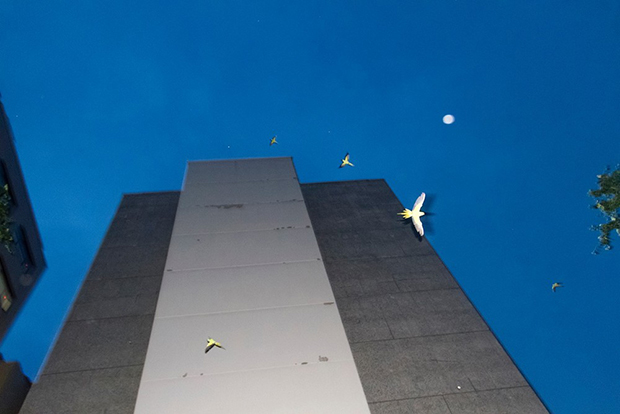 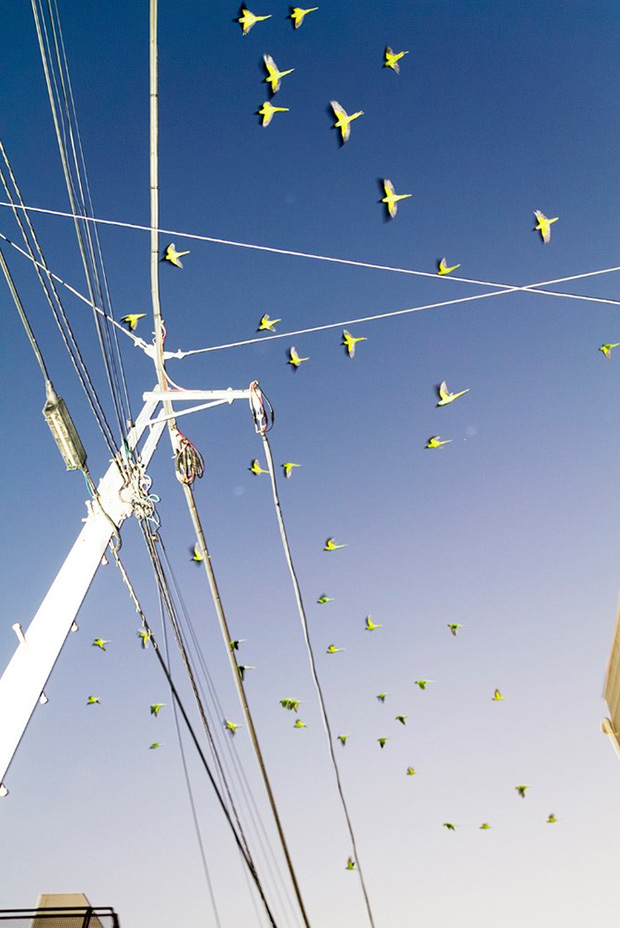 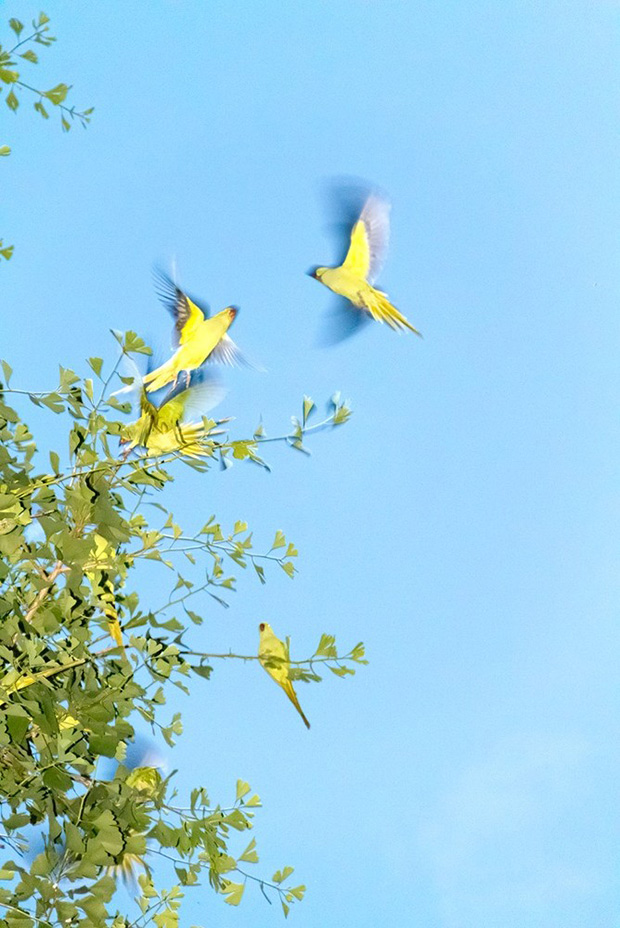 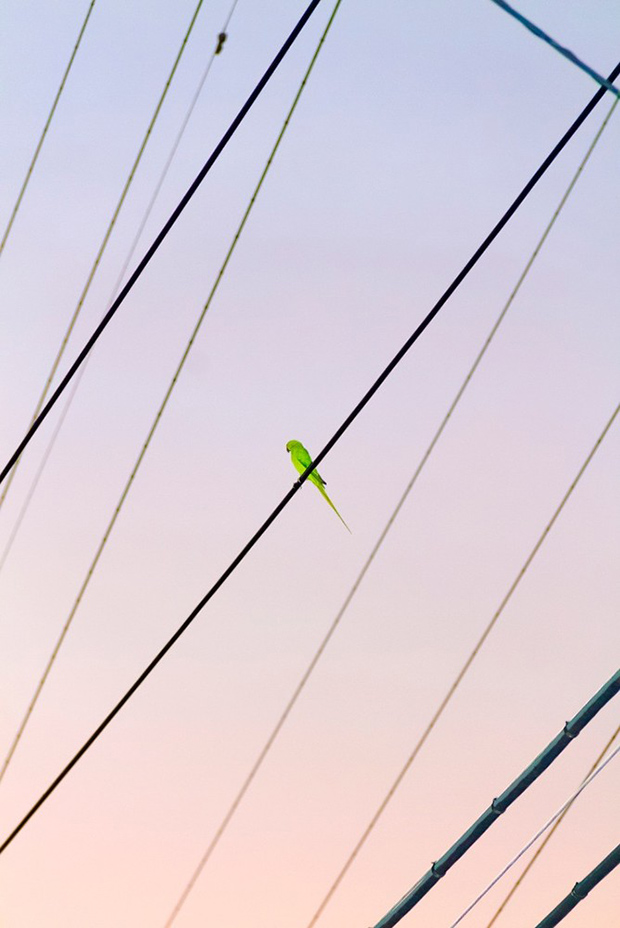 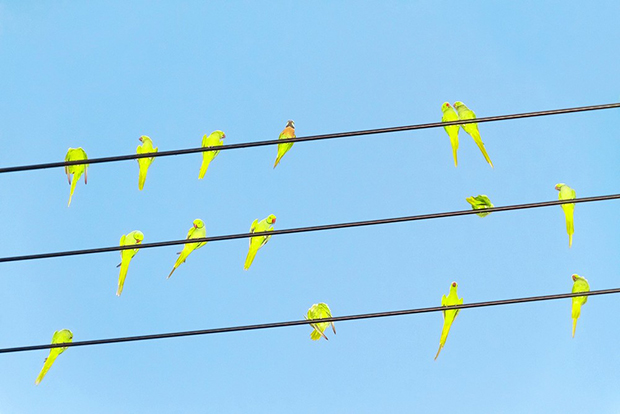 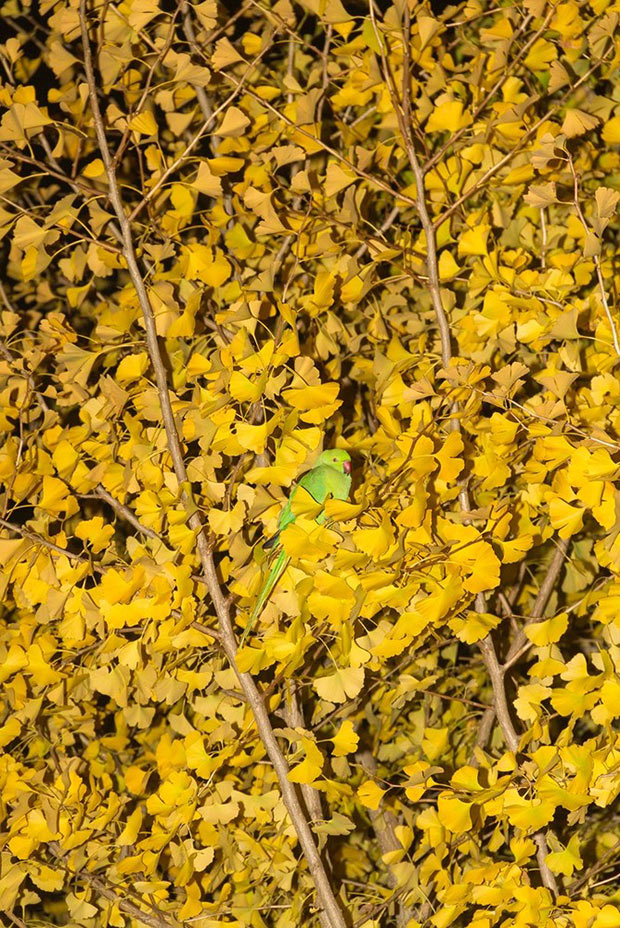 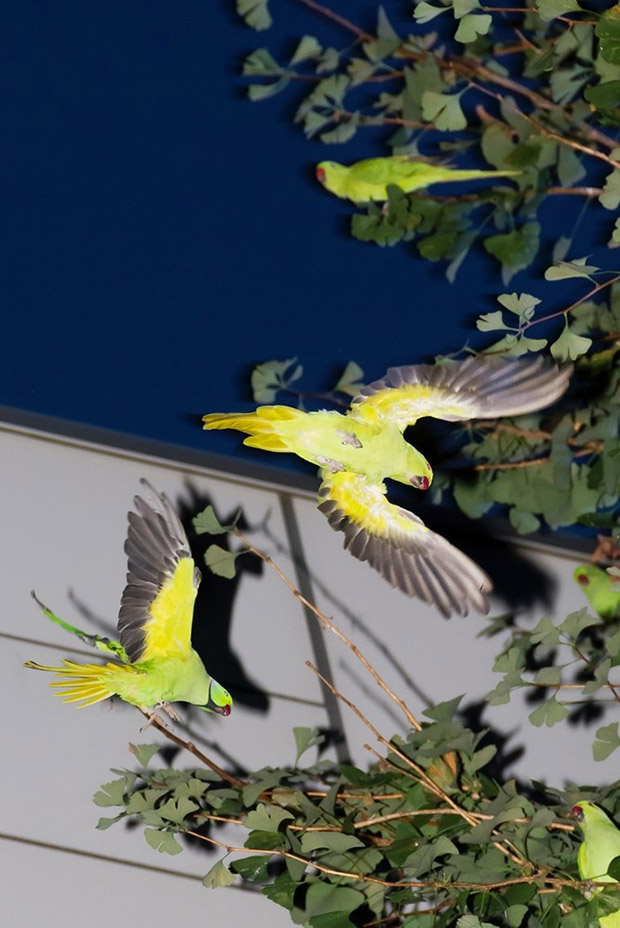 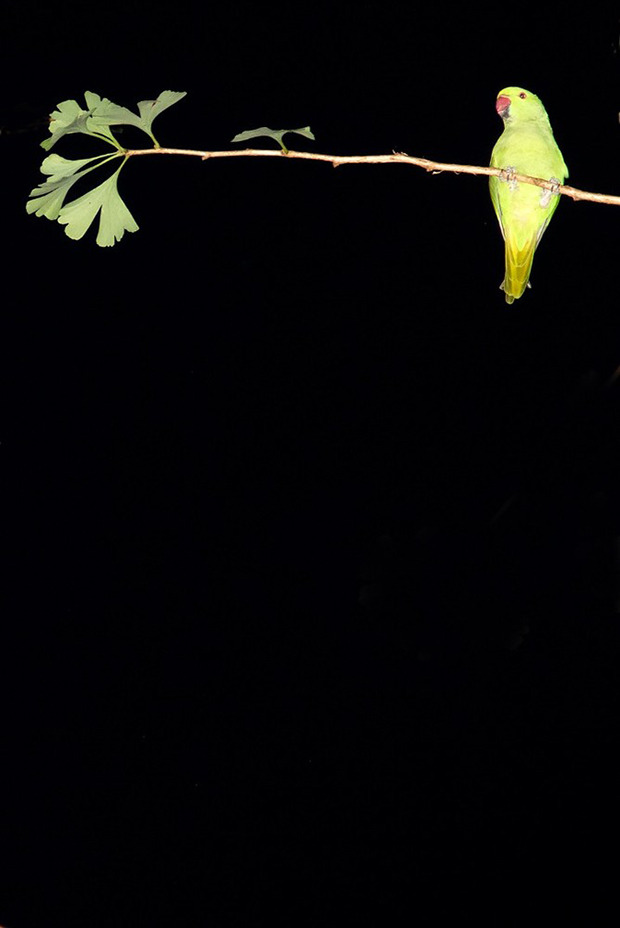