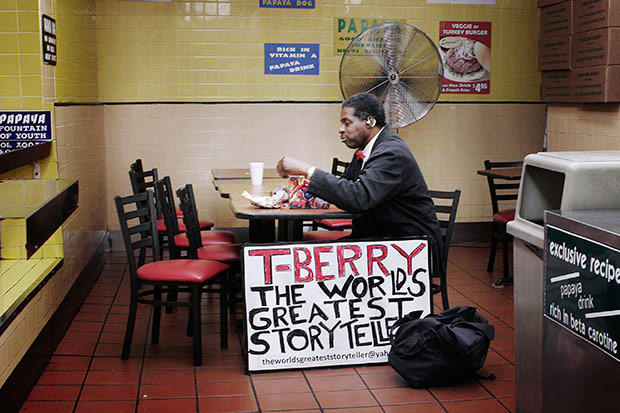 When you meet Mr. T. Berry, you are unlikely to forget it. Photographer Horatio Baltz encountered the performer and storyteller one night in 2010 while making portraits in New York City. Berry has been a street raconteur since the 1980s, his unique style and presence an integral fixture of the Greenwich Village bar scene. The epic, lewd and strangely profound tales arrested Baltz’s attention and he has been photographing the wandering orator ever since. In a mixture of images and captivating videos, the work attempts to tell the personal story of ‘The World’s Greatest Storyteller’. We recently asked Baltz to tell us more about the project. 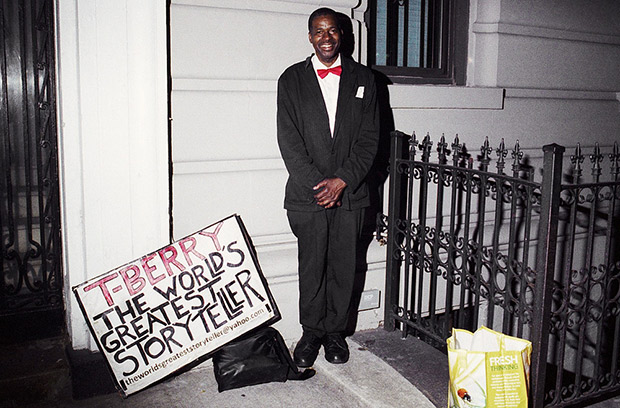 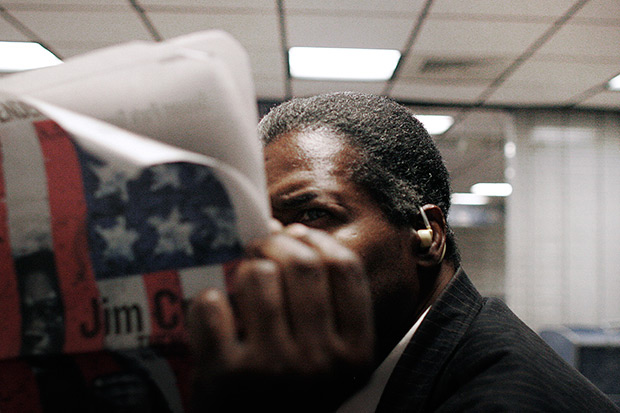 Since meeting T. Berry that first night, how often do you film/photograph him?
“About a year later I took a week-long workshop with Magnum photographer Chien-Chi Chang. We were tasked to find and shoot a story in a week’s time and I decided to try to get back in contact with T. Luckily, I was able to find him the first night I went out. I spent the week shadowing him and shooting stills.

“After the workshop ended I continued shooting stills with T, and eventually decided to start shooting video. I had almost no experience in documentary film so I was very much learning on the fly and trying to figure it out as I went. I spent about a year collecting footage of T. His schedule was touch and go – we would usually go out late on Fridays and Saturdays trying to hit the bar crowds. We would meet up around 10PM and I would follow him until 4 or 5AM.” 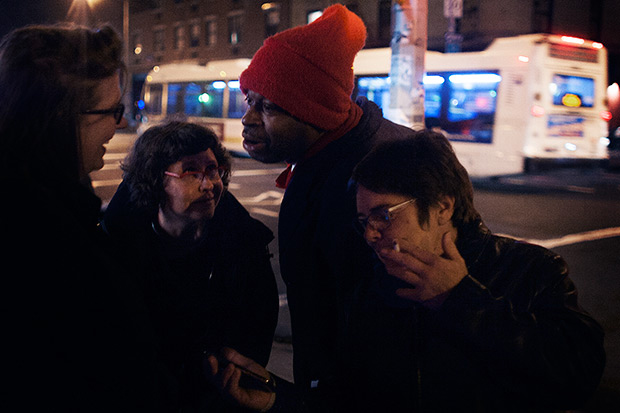 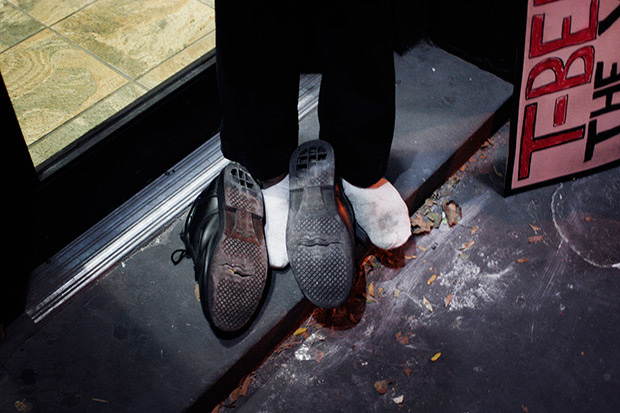 What would you say is the most common misconception people have regarding T. Berry and his stories?
“T. Berry performs his stories to late night bar crowds, so more often than not, people are thoroughly intoxicated. It’s hard to tell exactly what they’re thinking or not thinking, and his interactions with folks tend to be brief. What I can tell you is that many people brush him off as a homeless beggar, scammer – a ‘crazy rapping homeless guy’. Others drunkenly listen for a few seconds before talking over him or staggering off. Some harangue him, a few stop and listen. The vast majority simply ignore him.

“I would say the biggest misconception people have about the stories are their origins. That’s not to say that the people who listen don’t appreciate them – his stories are accessible and entertaining in the same way jokes are. They’re lewd and funny and are meant to be shared. But I think there’s another level of appreciation when you realize just where these stories came from. They feel like living things that have grown and changed over time – how even after a hundred years a story can still feel as relevant as ever. His stories speak to issues of race, class, the unsung hero, the broken hearted man made a fool, the protagonist down on his luck. To me, they still hold up and maybe tell us more about ourselves and our history than we’re willing to admit.” 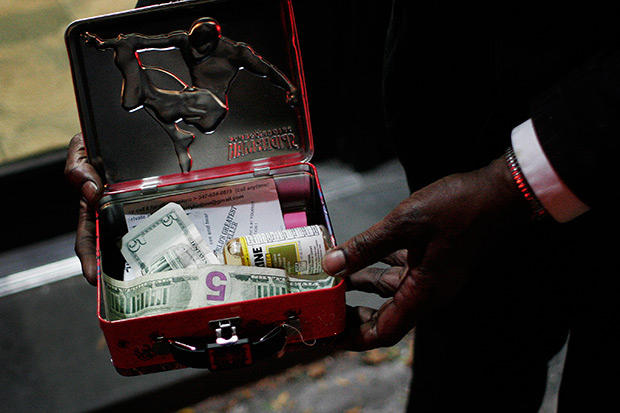 How much of a difference is there between T. Berry’s performative identity and who he really is? Do you get to see who he really is or is he always “performing” for the camera?
“T. Berry’s performance persona is vastly different than the person I began to know as a friend – this is the crux of the story I’m trying to tell. T. was very aware of the camera and very cautious as to how he would be portrayed, which is understandable. There was a very obvious emotional wall between us. He was careful with his words and what he let the camera see or hear.

“After I had put in the time and he began to trust me I started seeing another side of his life. Like everyone, he’s lonely. He values the connections he makes while performing, but he knows they’re fleeting and superficial. I got a sense that T. doesn’t really have anyone to really sit down and talk to. He’s a charming guy with a heart of gold who’s had a rough life – and despite all of it he still has this unexplainable sunny disposition. It’s as if tomorrow he could just wake up and everything will be bread and roses. It was inspiring.” 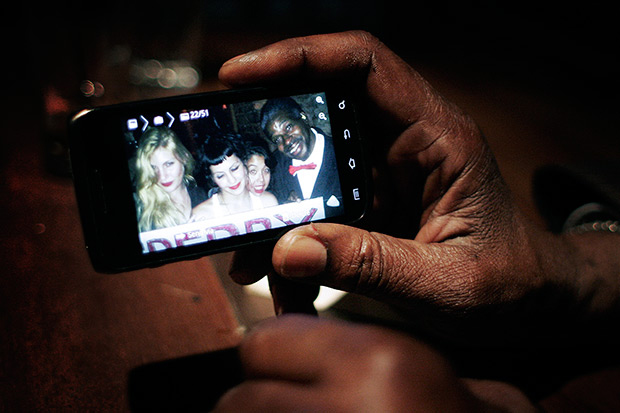 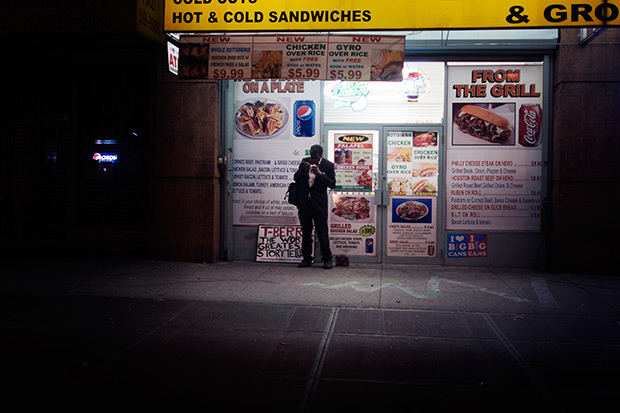 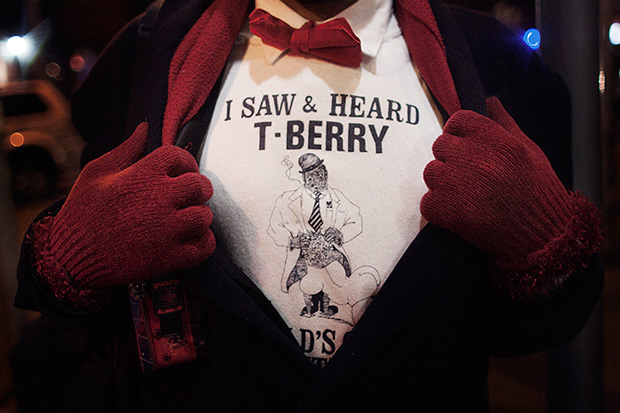 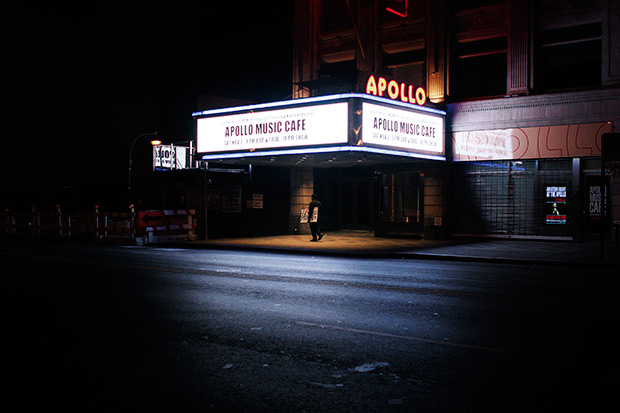 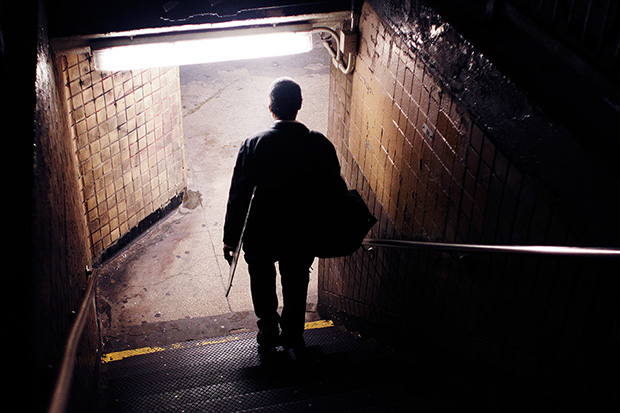 This post was contributed by photographer and videographer Adam Forrester.