Photographer and videographer Adam Forrester explores the curious culture of earth-eating in his first featurette-length film EAT WHITE DIRT. Currently residing in Pike County, Alabama, Forrester gives us a lively look into this long-standing tradition and those seemingly eccentric individuals who partake in it. Found in the Fall Line of the American South, the chalky white substance is examined for its prehistoric origins, medical mythology, and the various controversies it has provoked in local communities. With a release date for summer 2014, we asked Forrester to tell us more about this extraordinary phenomenon.

How did you come across this aspect of southern culture?
“After graduating college I took a job with the local paper in Columbus, Georgia. I went around collecting old unsold papers and bill payments from convenience store owners. Most of the convenience stores that I sold papers to were locally owned and located in neighborhoods. They were less regulated than most of the gas stations along the interstate and the owners could put just about any product on their shelves if there was enough demand for it.

“After the first week I began to notice these mysterious little bags of white, chalky rocks for sale in many of the stores. These Zip-loc bags, labeled ‘White Dirt’ were most often for sale right at the front of the store, next to the register. I’d never seen anything like that before. I would ask the clerks, ‘What is this white clay for?’ They would reply, ‘Oh I don’t know, people eat it.’ ‘Why?’ would always be my next logical question. None of the clerks could answer this question. ‘Why eat white dirt?’ was a question just waiting for someone to attend to, and I just happened to come along in a beat up Volvo full of outdated newspapers.”

As an outsider looking in, what do you think would be the greatest misconception about those who eat white dirt for medicinal purposes?
“Most often this practice is erroneously associated with poverty. Dirt itself is considered the lowest of the low. We literally walk all over it daily. Many people assume that anyone that would be willing to put dirt—in all of its dirtiness—in their mouth must be incredibly hungry, and have no other option. This just simply isn’t true. I’ve met so many wonderful people who are practitioners of geophagy, or earth-eating, and most of them are living comfortable middle class lives. I’ve even met several Doctors of Philosophy that choose to eat white dirt as well. As for the medical benefits, that’s another point of contention.” 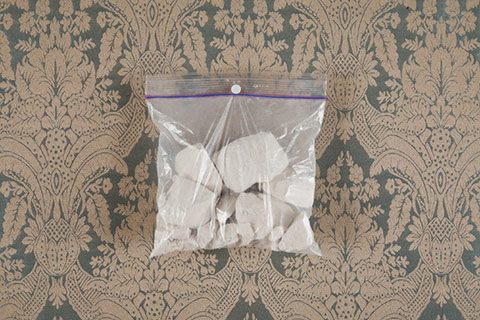