Andres Serrano’s Portraits of the Homeless in NYC 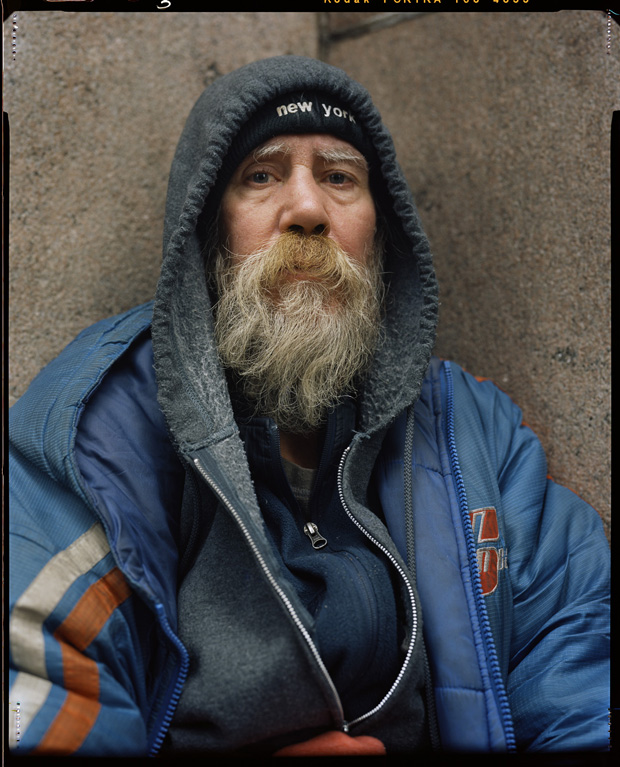 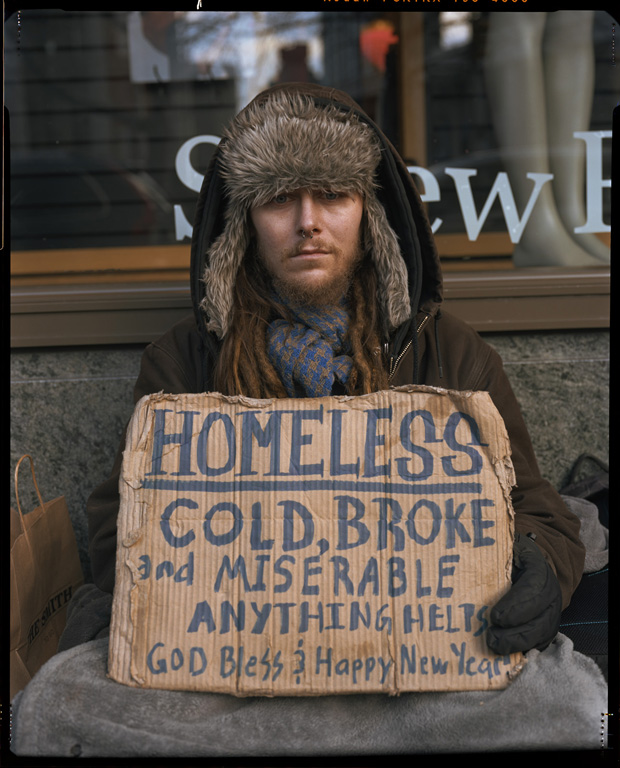 Over the last several months, photographer Andres Serrano took to the streets capturing poignant, resonating portraits of NYC’s homeless in a series he calls Residents of New York. Presented by More Art as a public art project, the large-scale portraits will transform locations around Washington Square, a full occupation of the subway station at West 4th Street as well as on La Guardia Place, Judson Memorial Church, and public phone booths through June 16th, 2014. An homage to the marginalized, overlooked citizens of the Big Apple where more than 60,000 people experience homelessness, Serrano’s larger than life images demand attention. We recently asked him to tell us more about the project. 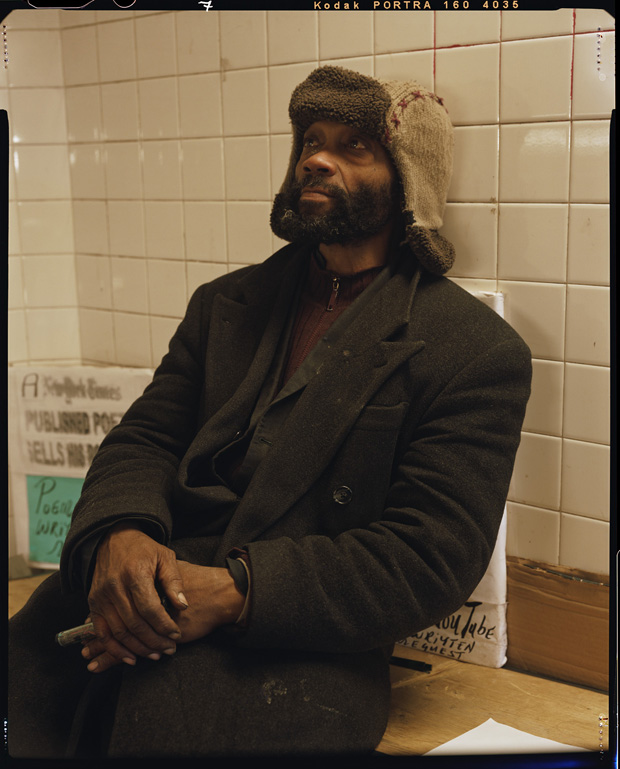 Your portraits of the homeless are intimate, calm, trusting. How did you go about approaching your subjects? Were any reluctant to be photographed? Did you spend time talking with them, hearing their stories before photographing?
“I asked them to pose like I would ask anyone else. They can only say yes or no. When I’m behind the camera I try to establish a level of comfort and trust that is not based on verbal communication but rather intuition, mine and theirs. Almost all the homeless people I approached on the streets agreed to pose. Yes, I pay money because it’s work for them, but I think, beyond the money, there’s the knowledge that I value them. I want them as my models and muse, and they’re happy that somebody sees something worthy in them. Only two people said no out of about a hundred.

“I generally don’t spend much time talking to anyone when I’m taking their picture. My goal is to get the picture and go. I know my people not from conversation but from the photographs I take of them. That’s really when my relationship with my models begins. I remember I once took Arthur Miller’s picture at the Chelsea Hotel. Arthur was kind enough to pose for my America series thanks to a mutual friend by the name of Scott Griffin. I took six rolls of 6×7 film, 60 shots and left my assistants to pack up while I went straight to the lab leaving Arthur Miller and Scott and another friend sitting in the living room. When someone asked, “Where’s Andres?” Arthur replied, “Where do you think? He went to the lab.” Arthur Miller knew. He knew what it’s like to be an artist and the priorities that artists make.” 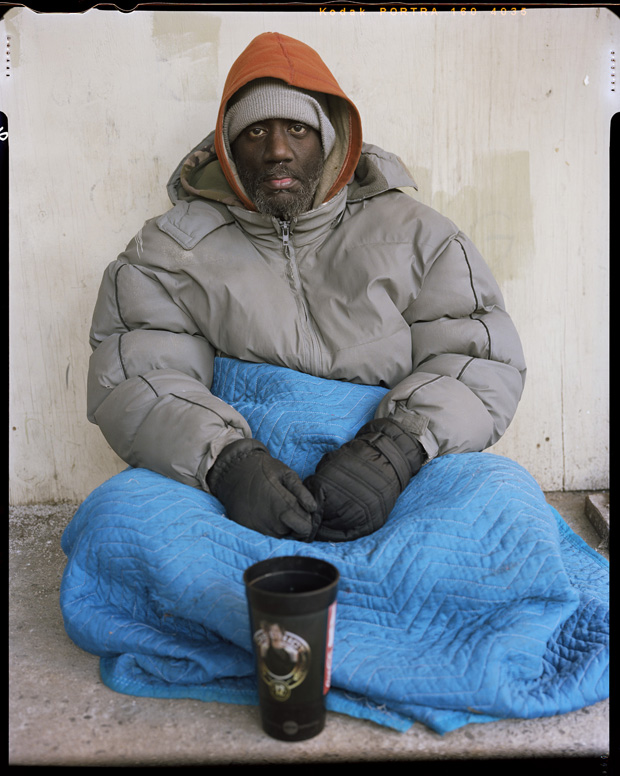 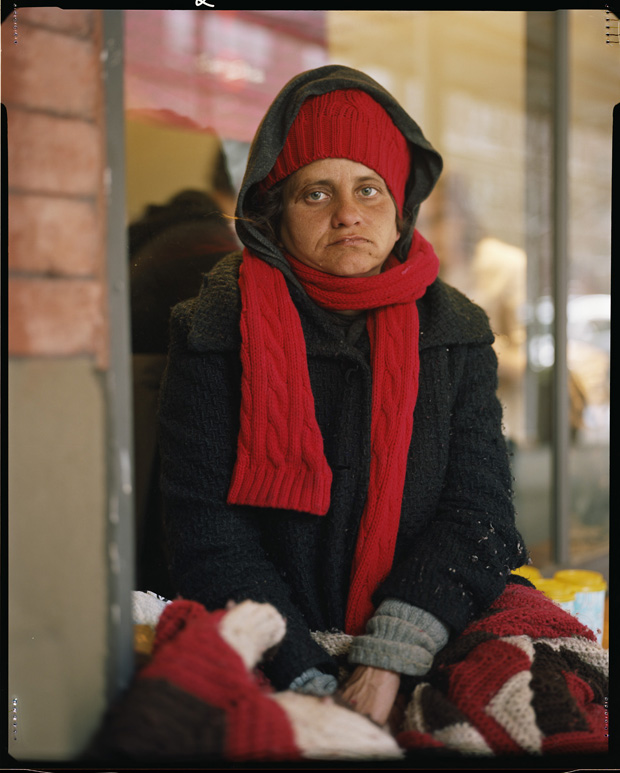 Were there any stories you heard along the way or encounters that have stuck with you?
“One of my most memorable encounters on the street was with a young couple I had met before. Two months earlier, in October, I did a conceptual piece called Sign Of The Times where I walked around the streets of Manhattan buying the signs the homeless use to ask for money. I explained that I saw every sign as a story and I wanted their story. I spent a month on the project, sometimes walking 6, 7 or 8 hours a day looking for signs to buy.

“Eventually, I collected about 200 signs and made a video called “Sign of The Times.” So I approached this particular couple and said to them, “I’m not buying signs anymore. This time, I’m taking pictures. Can I take your picture?” And they said yes. As I was talking to them I noticed the man’s eyes were very yellow. And I said, “Wow, your eyes are really yellow,” and he said yes, he had been to the hospital and they had given him some medication for it. So I took their picture and two weeks later another homeless man came up to me and said, “You know, that guy, Red, you took his picture. He died.” 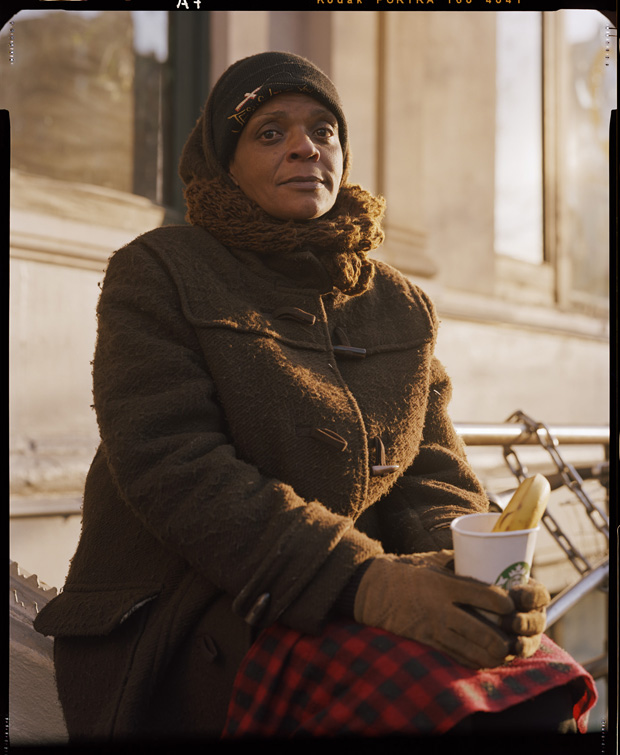 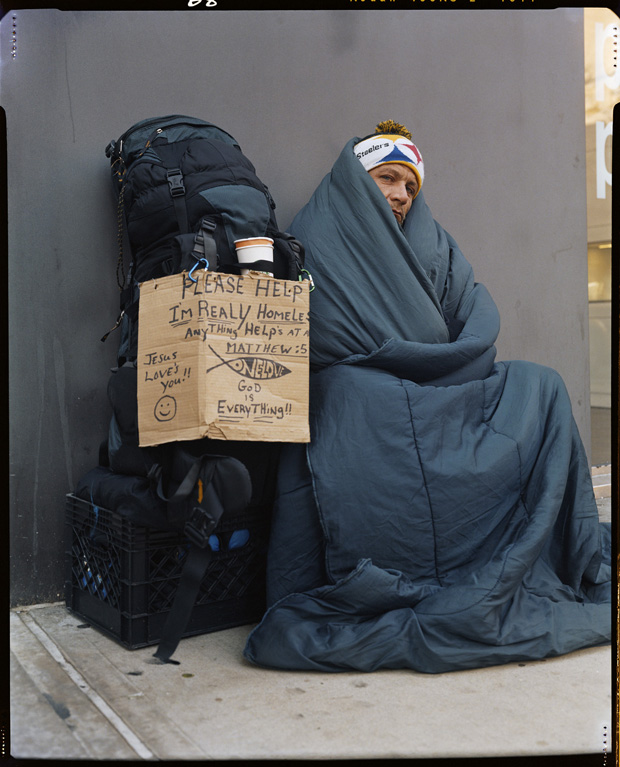 Can you talk about your approach to this new work compared to what your were doing in Nomads, the studio-style portraits you made of the homeless 25 years ago? Nomads seemed to be about creating new realities for your subjects, while this work remains rooted in the sitter’s element, current reality.
“The Nomads were conceived of as studio portraits inspired by the portraits Edward Curtis did of Native Americans. Like Curtis, I had an improvised studio. Whereas Curtis had a wagon with a camera and a background he travelled with, I made my portraits late at night in the subway using flash and a backdrop. This time, for Residents of New York, I decided to use a 4×5 camera with my assistant Ed Watkins, and make the street a part of the picture. The street, in fact, was my studio.” 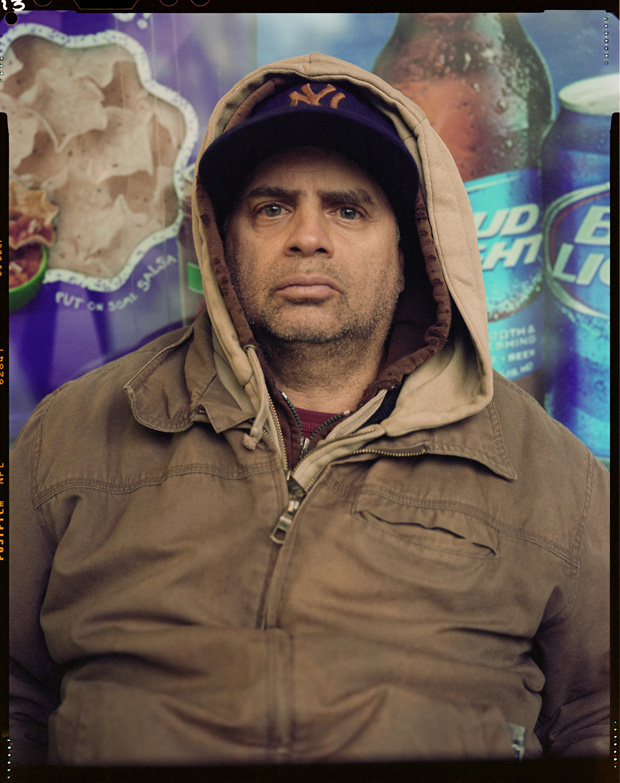 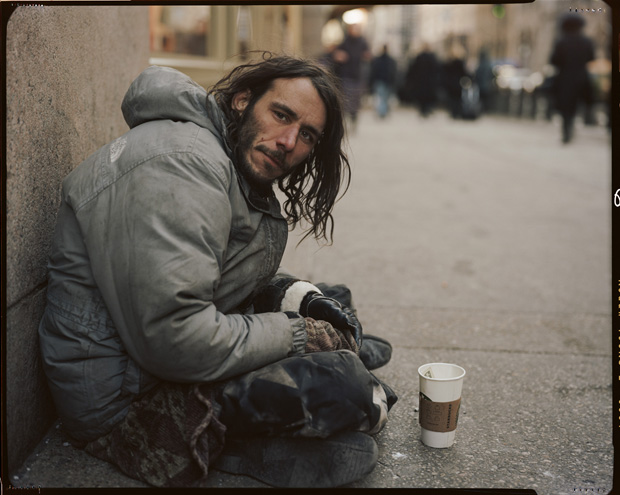 Tell us about deciding to print these photos large-scale and the installation element in the subway station. Are the large-scale works in part a way to insert your subjects back into the city, present them in a larger than life way so they can’t be ignored?
“When More Art invited me to do a public installation, I wasn’t quite sure where the work would be shown or what I was going to do. It was a creative process, and after several months, I finally decided what form the project would take. I knew I wanted it to be as visible as possible meaning finding locations that would have plenty of traffic. The subway seemed like a good idea and the West 4th st. station is a great location because when you enter it from the south end you have to go through two long corridors to get to your train. It’s like a gallery down there. You have a captive audience. The most satisfying thing about this project is that I get to put the pictures I want to see on those walls in place of advertising. I want to pay homage to these residents of New York and say that they live here and are a part of this city, too.” 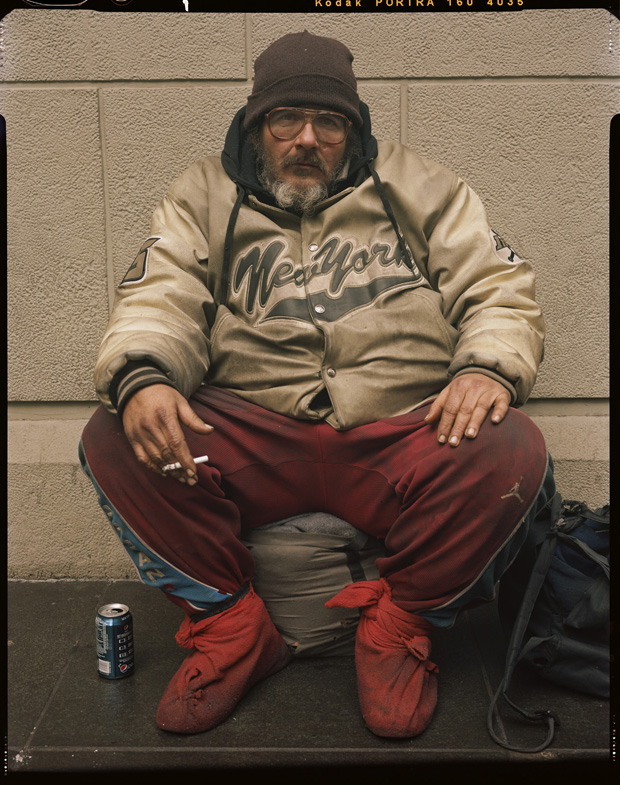 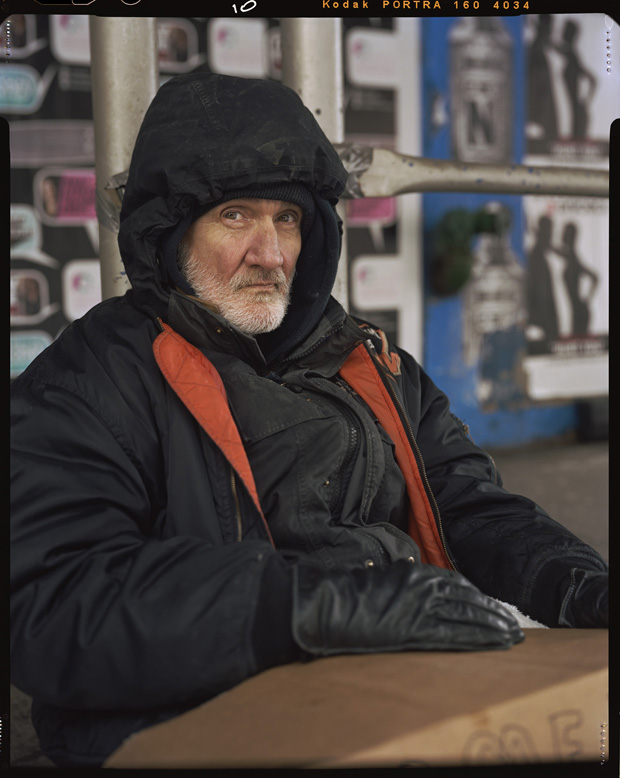 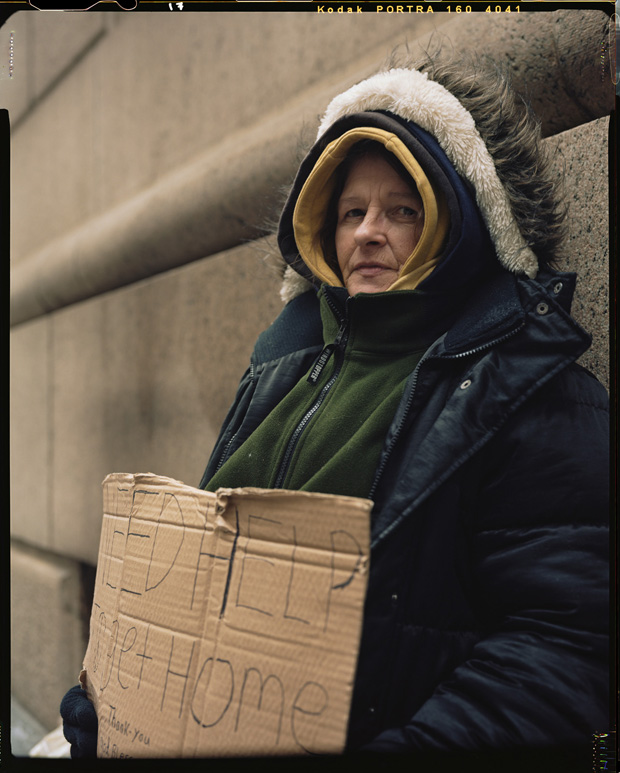 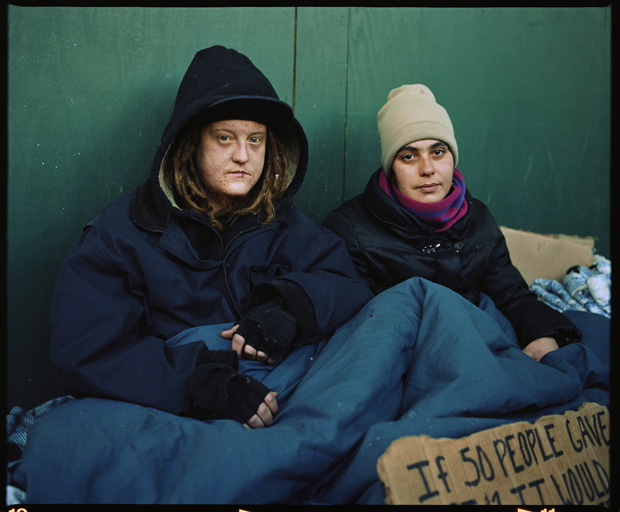