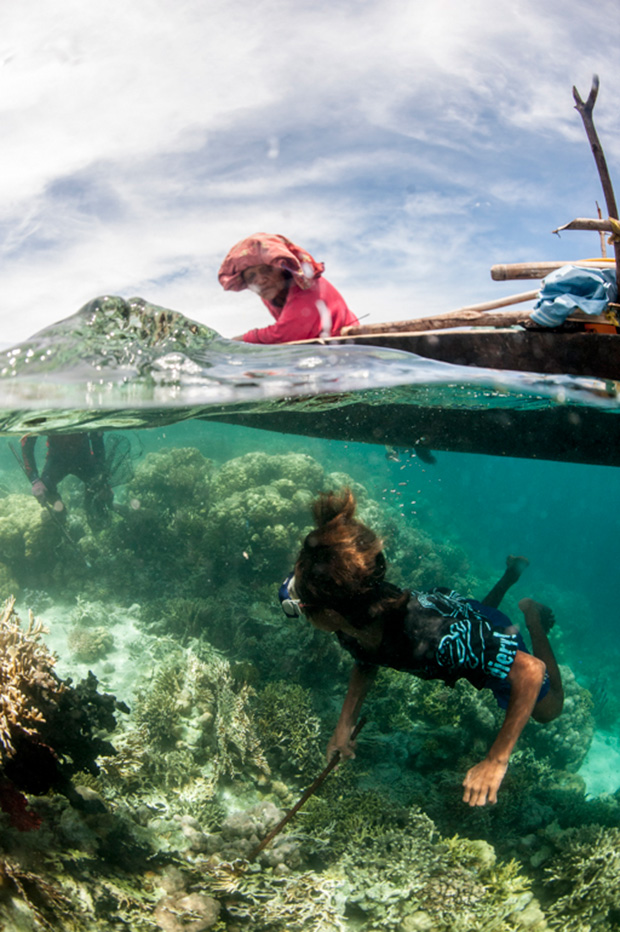 Ibu Ani looks on as her son, Ramdan, forages the reef for clams. Since Ani’s husband died of the bends while compressor diving, she has relied on her son to support her during the months they spend at sea together. © James Morgan 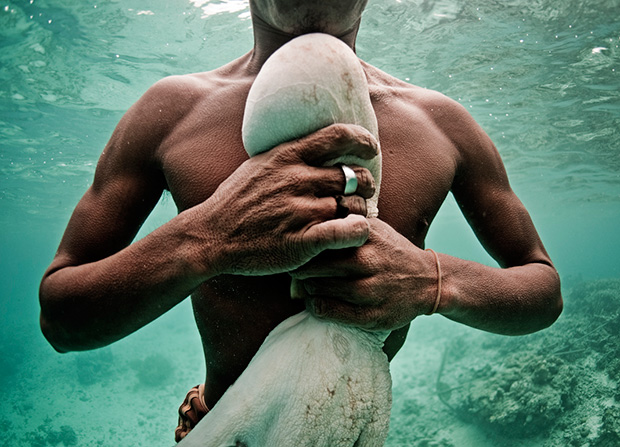 Jatmin surfacing with an octopus. The spearguns the Bajau often carry are handy for rooting the creatures from the holes in which they hide. Sulawesi, Indonesia. © James Morgan

These beautiful photographs of the fishing practices of the Bajau Laut, who live in the Coral Triangle in Indonesia, belie a harsher reality. For over half a year in 2011, London-based photographer James Morgan photographed the Bajau Laut, a traditionally nomadic people who used to live almost their entire lives at sea. The Bajau fish for both income and food, with traditional practices involving the use of nets, lines, and handmade spear guns to catch fish. Unfortunately, the live fish trade, a global industry worth an estimated US $1 billion, has driven them to employ homemade fertilizer bombs and potassium cyanide to increase their catch.

These methods of fishing are, of course, harmful to the reefs which populate the Coral Triangle, home to 75% of the world’s coral species and populated by many thousands of species of sea creatures and reef fish, many of which are critically endangered. And, the Bajau are harmed, maimed, and even killed, by their own adopted methods of fishing.

The situation for both humans and marine environment is precarious, and while dynamite fishing increases productivity, the Bajau are inevitably threatening their own future ability to sustain themselves from fishing by impacting the source of their own livelihood. Destruction of this ecosystem will have dire ramifications not only for this “largest and most diverse marine bio-region in the world” but also the larger marine ecosystem of the entire planet. 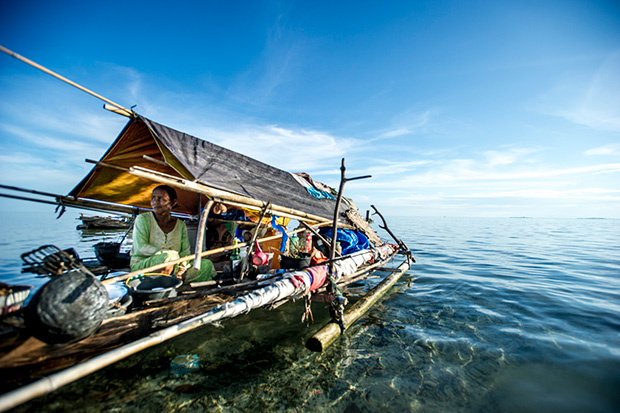 Ibu Diana Botutihe is one of the few remaining people in the world to have lived her entire life at sea, visiting land only intermittently and as a matter of necessity in order to trade fish for rice, water and other staples. Here she is pictured on her boat in Sulawesi, Indonesia. © James Morgan 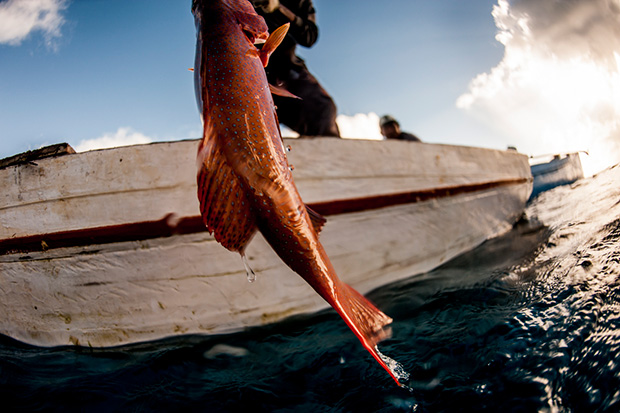 Catching a grouper the traditional way, with hook and line as opposed to cyanide, yields a much smaller catch and radically decreased profits. While fishermen and export companies are making efforts to continue this more sustainable way of fishing, ultimately consumer demand has the biggest chance of making a sustainable live fish industry a reality. © James Morgan 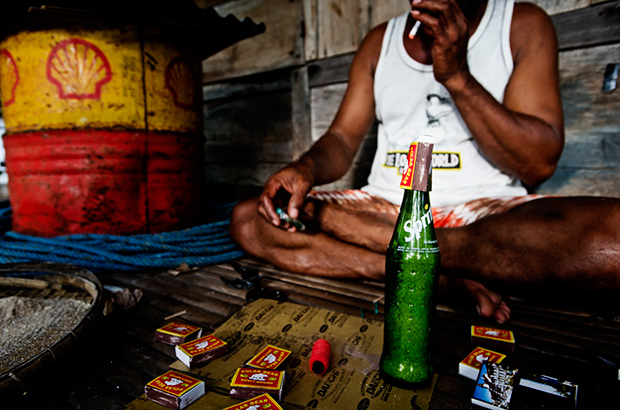 Pak Usrin demonstrates how to make a fertiliser bomb, though he says he stopped bombing reefs in 2005. Today he gets paid through Reef Check Indonesia to protect his local coral environment. Wakatobi, Indonesia. © James Morgan 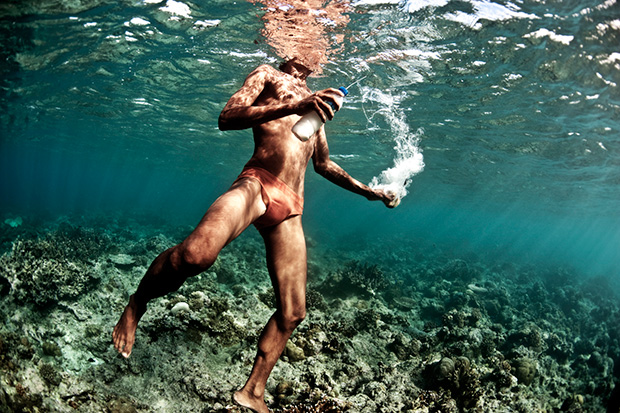 Compressor diving, often in conjunction with cyanide fishing, remains a common practice amongst the Bajau Laut despite being unsustainable, illegal, and highly dangerous. Both young Bajau men and children will routinely dive to depths of 200 feet (60 meters) with air pumped down to them through a hose pipe and a regulator. With no knowledge of the dangers inherent in diving to such depths, they often ascend far too quickly, resulting in nitrogen build up and the bends. Compressor diving is one of the main causes of unnatural death amongst the Bajau communities Morgan has visited. © James Morgan 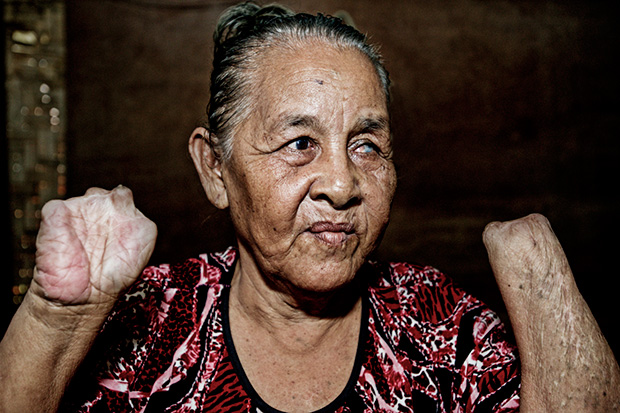 Ibu Hanisa lost her hands and the sight in one eye when a homemade fertilizer bomb went off in her house. © James Morgan 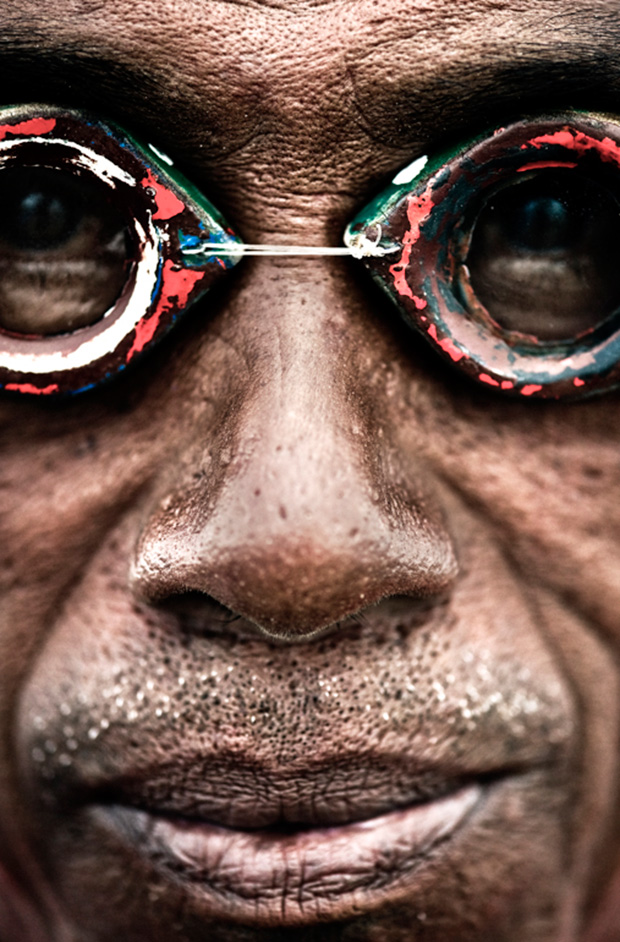 Moen Lanke, seconds after free-diving for clams with a tire iron, the weight of which holds him down on the ocean floor so he can run along the reefs. In order to get around the problem of equalizing (which balances the pressure of the inner and outer ear in deep sea), it is common practice for the Bajau to intentionally burst their ear drums at an early age. © James Morgan 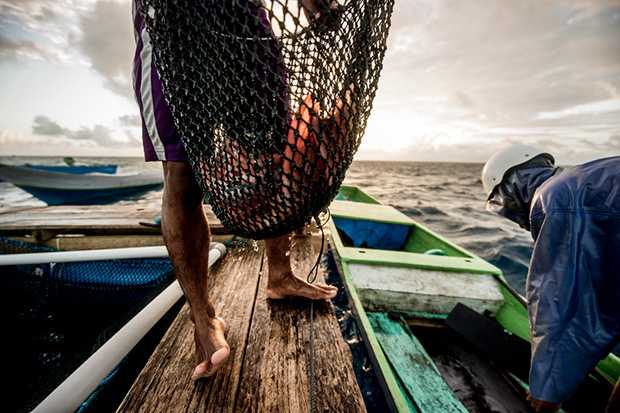 A significant source of income for the Bajau is selling their catch of grouper to live fish export companies. At the end of the day a Bajau fisherman will take his catch to the ‘cages’—large underwater nets used by the export companies to store grouper and other live reef fish. Tomian Island, Wakatobi, Indonesia. © James Morgan 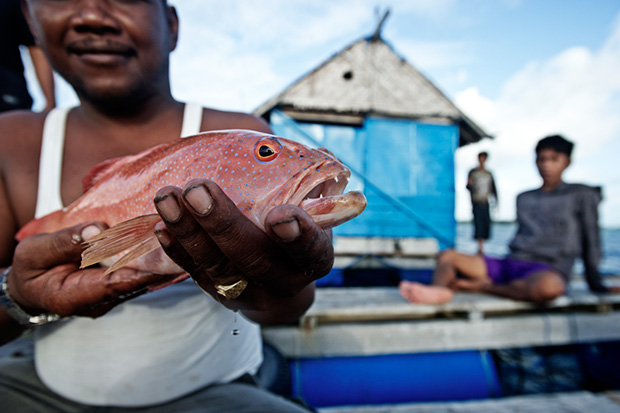 Tadadak with a grouper at the cages off Tomian Island. Grouper, along with Napoleon Wrasse, is one of the most highly demanded species in the live fish trade. It is also one of the reef species vital to the preservation of the coral ecosystems. Wakatobi, Indonesia. © James Morgan 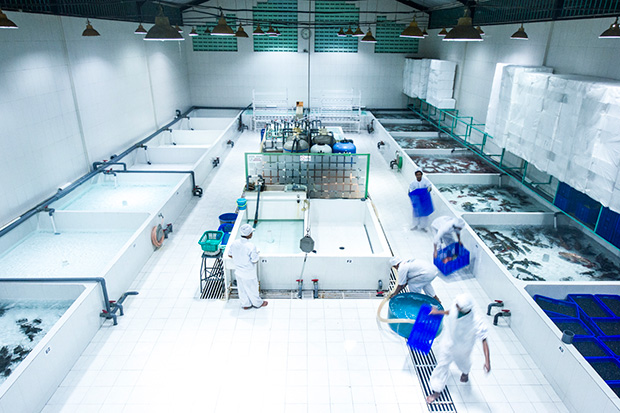 The grouper are transported to a holding facility in Bali, where they are kept in live fish tanks before being flown to markets in Hong Kong and mainland China. © James Morgan 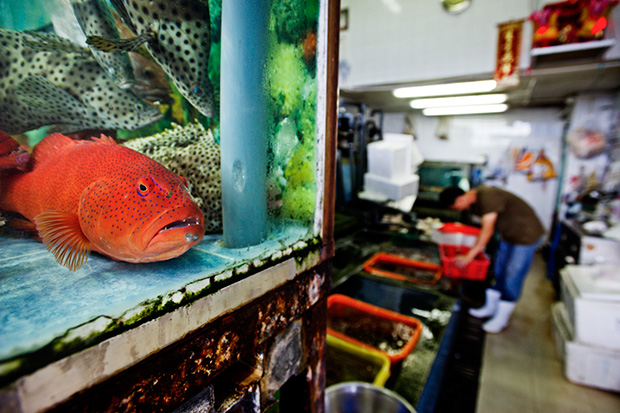 A grouper, newly arrived in Hong Kong, for sale at a seafront restaurant in Sai Kung town, Hong Kong. After traveling thousands of miles, the grouper, at just under a pound, will fectch over 130 USD on a dinner plate. It may well have been caught using destructive fishing practices, but there is no real way for restaurateurs or consumers to know where the fish is coming from or how it has been caught. © James Morgan