Photojournalist Captures the Ku Klux Klan in Their Everyday Lives 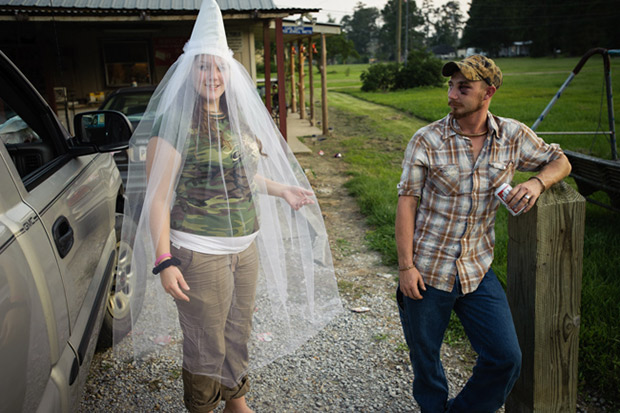 “Little Charlie” poses in her custom-made Klan wedding veil, as her fiancé watches on. 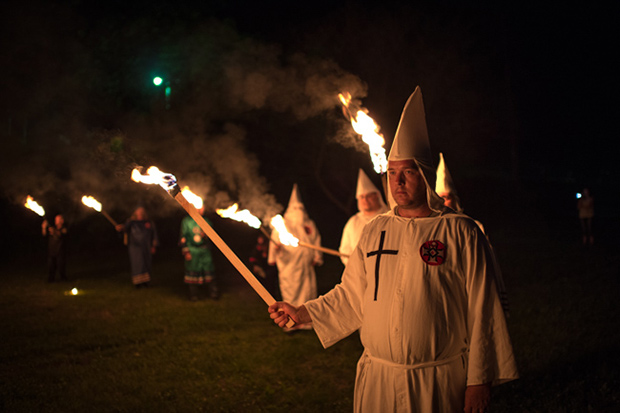 An Imperial Kludd (chaplain) circles a fiery cross shortly before setting the base aflame. Tennessee.

In his series Ku Klux Klan, photojournalist and former Marine Anthony S. Karen takes a forthright look into the daily lives and rituals of one of the nation’s most ominous societies. Discovering very little documentation about those behind the mask, Karen spent many months reaching out to Klan members both online and through multiple phone calls. Finally in 2005, Tennessee ‘Imperial Wizard’ Dale Fox invited Karen to an event and afterwards, his home. A KKK leader of his ‘realm,’ it was the Wizard’s authoritarian approval that opened doors to other groups across Pennsylvania, Mississippi, Arkansas, Virginia, Carolina, Missouri and many more. Karen discovered groups existing in both rural and urban territories, located in almost every state in America and parts of Europe.

Captured over the last decade, the images are constantly surprising and candid. Both acute and unsettling, Ku Klux Klan provides a surreal glimpse into the everyday experiences and hallowed ceremonies of Klan members. Though there are many factions splintered across the country, most are united through issues of illegal immigrants, minority crime, interracial marriage, and homosexuality. Despite frequently having social influence in their communities, few are interested in the media or public demonstrations of their lifestyle. From secretive rituals to “cross lighting,” Ku Klux Klan allows us a broad and intimate look into a largely hidden and unknowable world.

In 2013, Karen’s work lead him to collaborate with the Discovery Channel on the fascinating documentary KKK: Beneath the Hood. 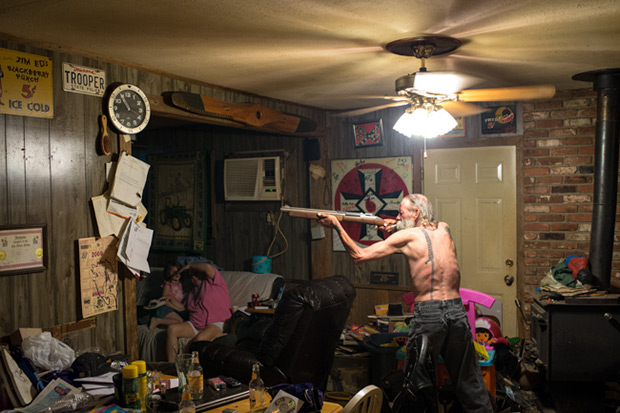 Carl, an Imperial Wizard of a southern-based Ku Klux Klan realm, takes aim with a pellet gun at a large cockroach (on the piece of paper just below the clock) while his wife and god-daughter try to avoid getting struck by a possible ricochet. 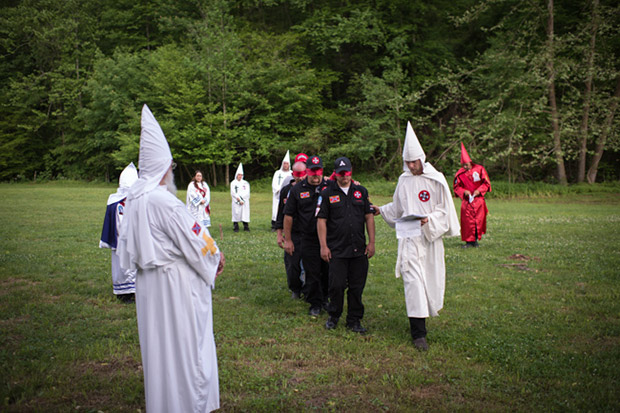 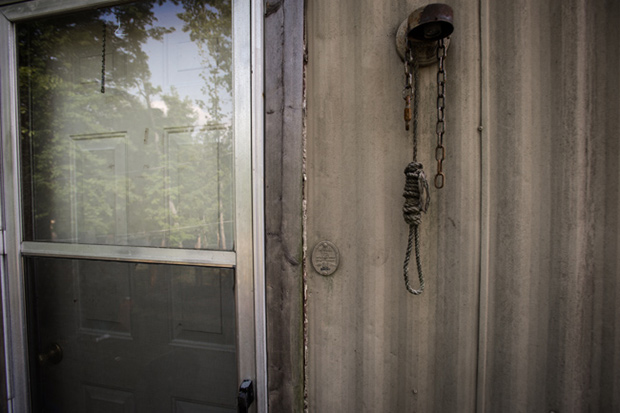 A noose marks the entrance to a Klansman’s home. 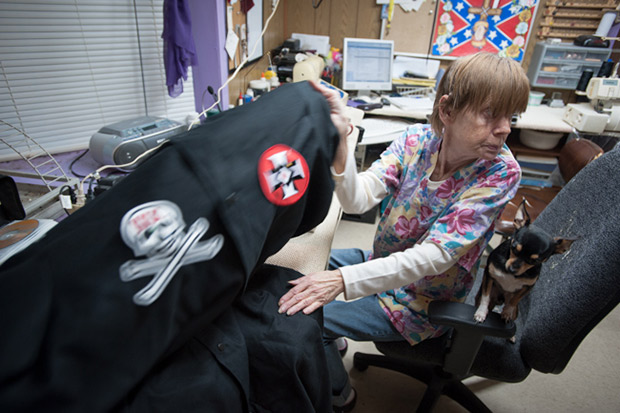 Ms. Ruth puts the finishing touches on a Klan robe for a “Knighthawk” which is a security position in the Klan. 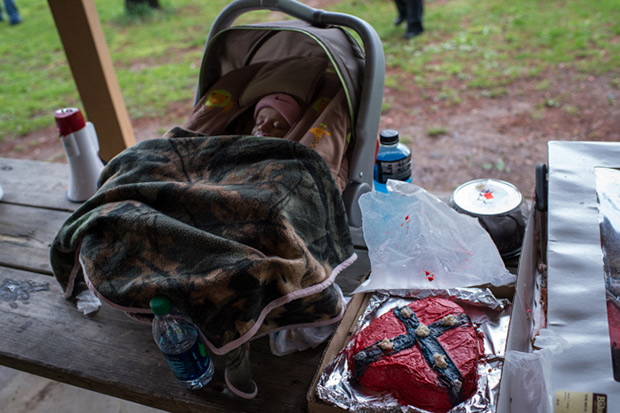 A rebel flag-themed cake at a Klan cookout. 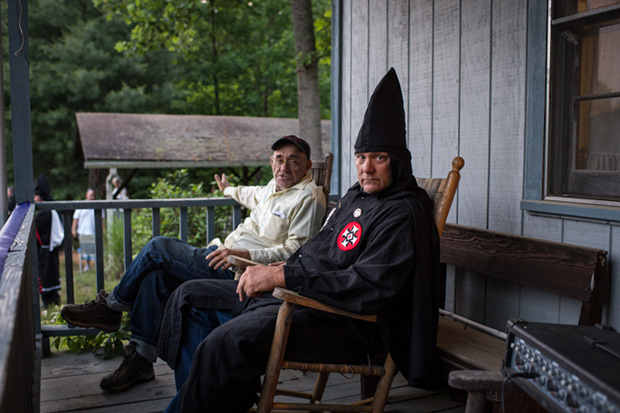 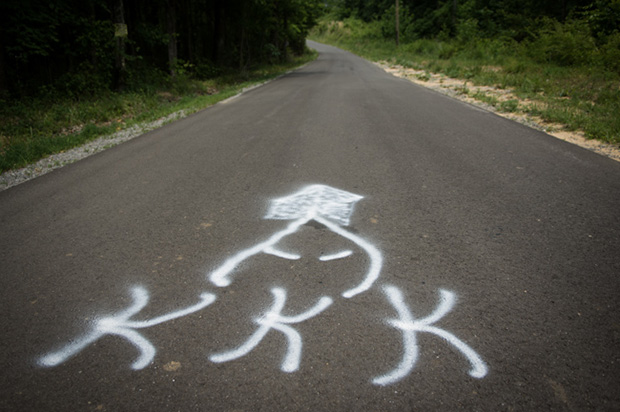 A spray painted “KKK” marks the way to an annual Klan gathering hosted on a 15-acre paramilitary compound. The event features concerts, speeches, and promotes white unity. The culmination of the weekend is a “cross lighting” ceremony, which according to the Klan, signifies the light of Christ. 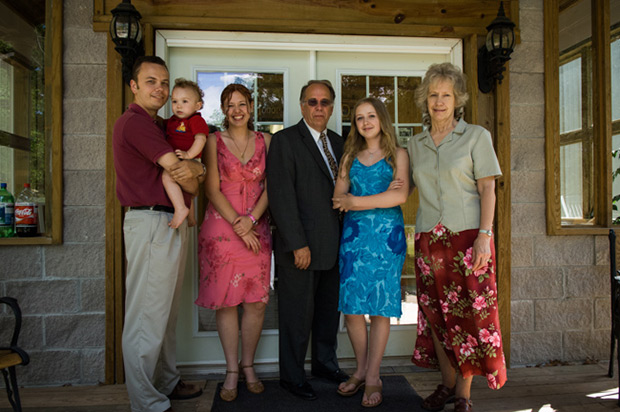 National director of the Knights Party, Thomas Robb (center), along with some of his family members. Harrison, Arkansas. 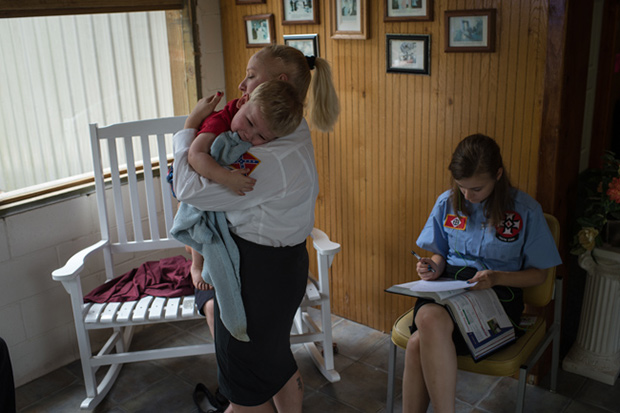 Members of The Knights Party during a break at the annual congress. Harrison, Arkansas. 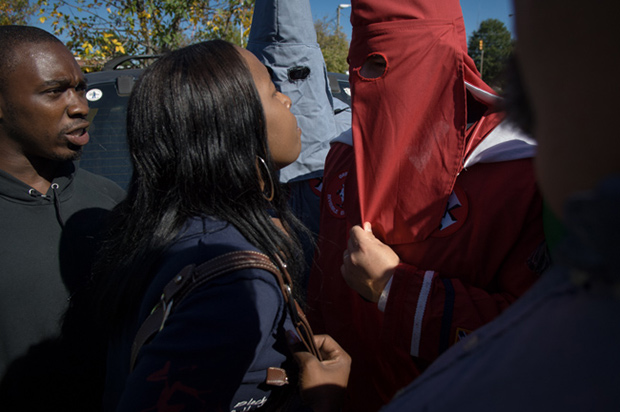 A confrontation immediately following a rally hosted by The Mississippi White Knights of the Ku Klux Klan at the Lee county courthouse in Tupelo, Mississippi on Saturday, October 20th, 2007. The protest was against illegal immigration and local sex offenders, and supported putting prayers back in school. 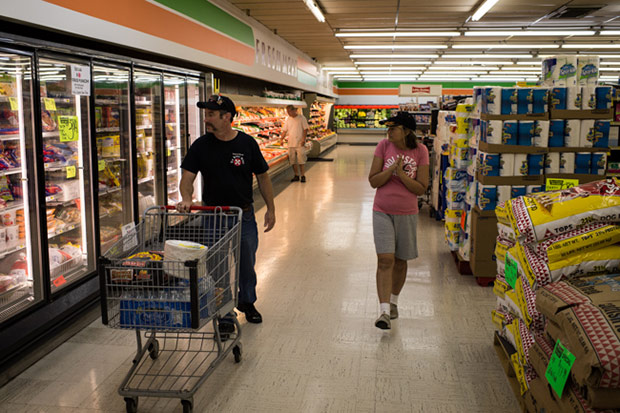 An Imperial Wizard and his wife food shopping at the local market.