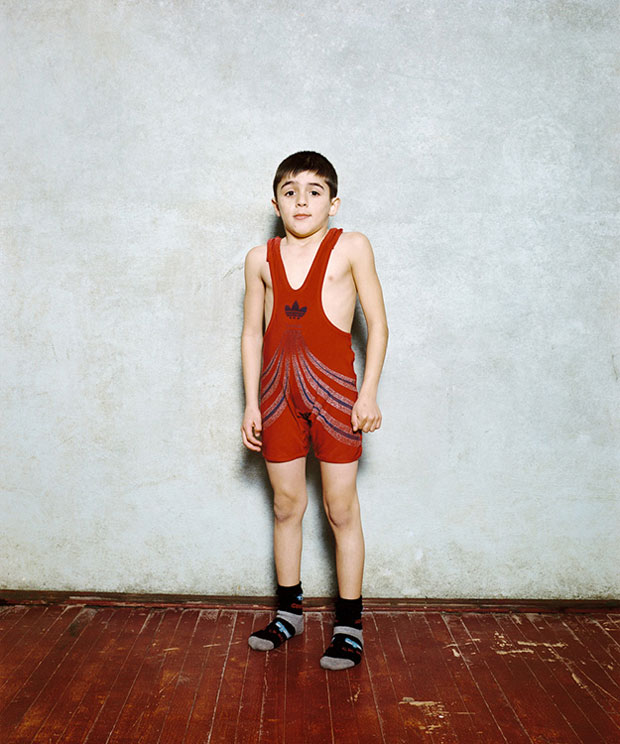 “We have a special upbringing here, we do things our way,” says trainer Magomed Magomedov. “If a man asks the parents for their daughter’s hand in marriage, the parents ask if he wrestles or not. Our forefathers told us that we need strong, courageous men. In this life, only the very fittest survive in Dagestan. Life is a struggle, and wrestling is a struggle in itself.” 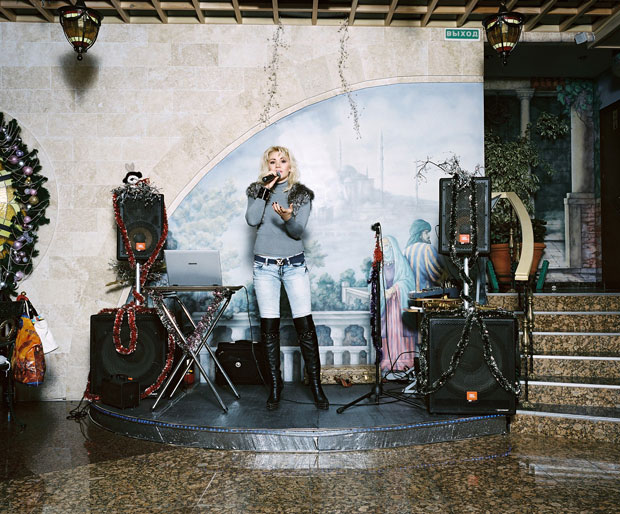 Every self-respecting restaurant has a singer.

The Sochi Project is the five-year culmination of Dutch photographer Rob Hornstra and writer Arnold van Bruggen’s meticulous, extraordinary chronicle of the land, people, and political upheaval surrounding the 2014 Winter Olympics in Sochi, Russia. The most expensive Games yet, The Sochi Project is described as “sitting at the combustible crossroads of war, tourism, and history.” Practicing their self-imposed “slow journalism,” the pair dedicated themselves to examining the everyday aspects of the region in order to tell a larger, more comprehensive story of the country’s radical preparation and conflicting history in the shadow of the upcoming event. From the curious Sochi Singers belting out lyrics in front of Italian tableaus to the suffering of those living under the threat of war just a few kilometers from Olympic venues, The Sochi Project is an encyclopedia of telltale clues to who Russia is trying to become on this new world stage.

Funded independently through self-publishing books and operating their own Kickstarter programs, Hornstra and van Bruggen have been allowed to take their time in a way unprecedented compared to typical documentary and journalism projects. The Sochi Project tells a story about a country largely silent and functioning as a lengthy, human examination that asks more questions than it answers. It is only through this complex anthropology that we are able to grasp onto something beyond the facade. 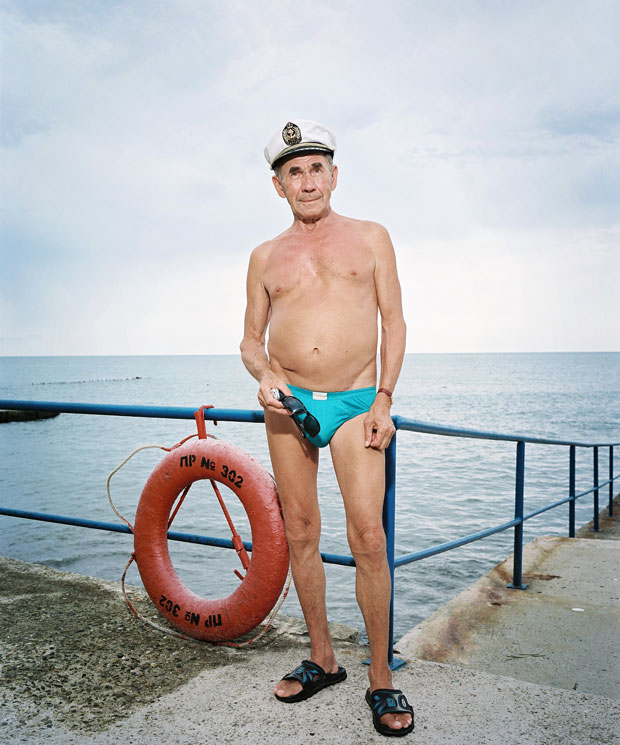 You describe your work as “slow journalism.” How does this process of long-term documentation add depth to the project?
“I think the most important difference between slow journalism—which is the same as documentary in my opinion—is the way of working. The starting point is always why things are happening instead of what is happening somewhere. For us it is very important to have time to investigate at home, be somewhere for a substantial amount of time, and then think about our experiences when we come back. The book about Khava is a good example. We met Khava on the side of the road and started talking with her. Ten months later we came up with the idea to build the book around her, around this meeting. A year later we went back to revisit her and ask if she wanted to be the main character.

“Some people might say that we are lazy or slow, but I really believe that we needed this time to digest things, make new trips in between, and finally believe that this coincidental meeting with Khava was the perfect example of our working in the North Caucasus. We simply need a lot of time to really understand things.

“Another example. Only after two years of working in Sochi, I came up with the idea to depict the singers in restaurants which resulted in Sochi Singers, and I still believe that it is a very suitable way to get a feeling of Sochi. I always wonder if I could have made up this series after one day in Sochi. I don’t know. I think I simply need time.” 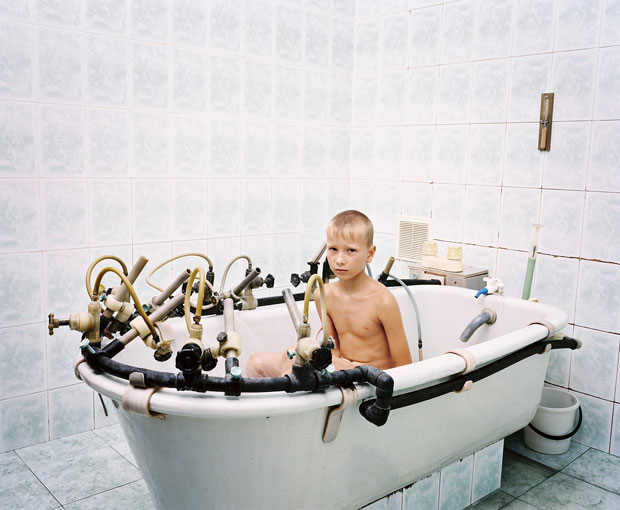 Dima gets treatment for his burns. Matsesta, Sochi region. 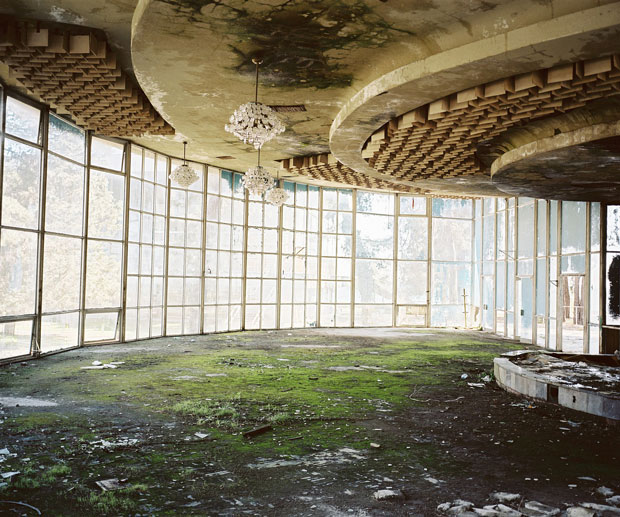 The former ballroom on the beach of Pitsunda, Abkhazia, 2009. When we return four years later, nothing has changed.

The Sochi Project includes a variety of mediums from portraiture, landscape, found imagery, and film. Why are these differing methods important in telling the story?
“Hmm. That’s a good question. When we capture something, we simply ask ourselves, what is the best way to capture this story? So the variety of mediums comes from the content. We never start a project by thinking about how many mediums we will include. It simply evolves from what we are doing. We are always looking for the best way to tell stories.

“This is probably also the reason why our final presentations—book, exhibition and website—are complimentary to each other. We asked ourselves for all three different platforms what would be the best way to tell the story An Atlas of War and Tourism in the Caucasus. And as a result we had three rather different presentations. Which is nice, because if you have seen the book, you will see new things in the exhibition. And if you see the exhibition, you will get a totally new presentation if you start looking to our website, etc.”

Do you plan to attend the 2014 Winter Olympics or document it in any way?
“We are not allowed to enter Russia, as our visas are refused. That’s what they do in Russia if you connect the facade of the Winter Games to the daily reality of poverty and human right violations.” 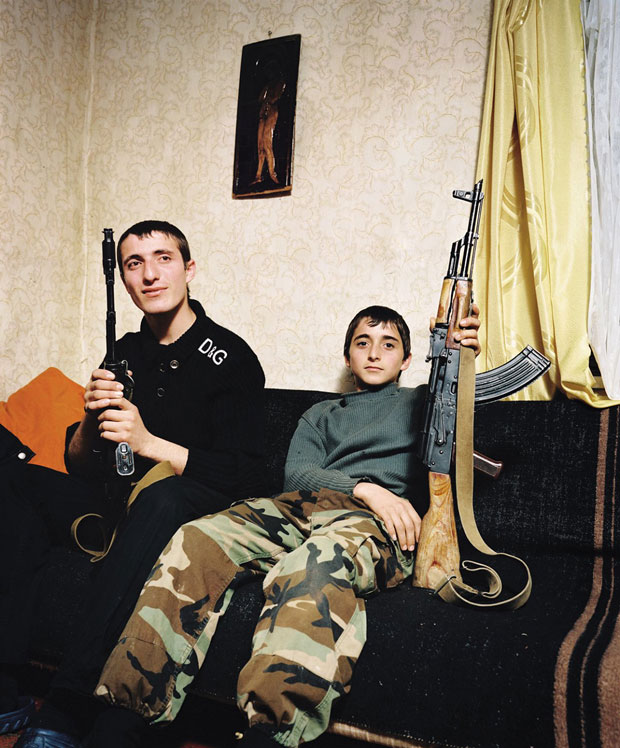 Brothers Zashrikwa, 17, and Edrese, 14, pose proudly with a Kalashnikov on the sofa in their aunt and uncle’s house. They live in the Kodori Valley, a remote mountainous region on the border between Abkhazia and Georgia. In August 2008, Abkhazia gained control of the officially demilitarised Kodori Valley. The valley’s 2,000 Georgian inhabitants fled over the border. A few families refused to be driven out: ‘We are mountain people. Borders don’t mean very much to us. But if I had to choose between a Georgian and an Abkhazian passport, I would choose a Georgian one.’ 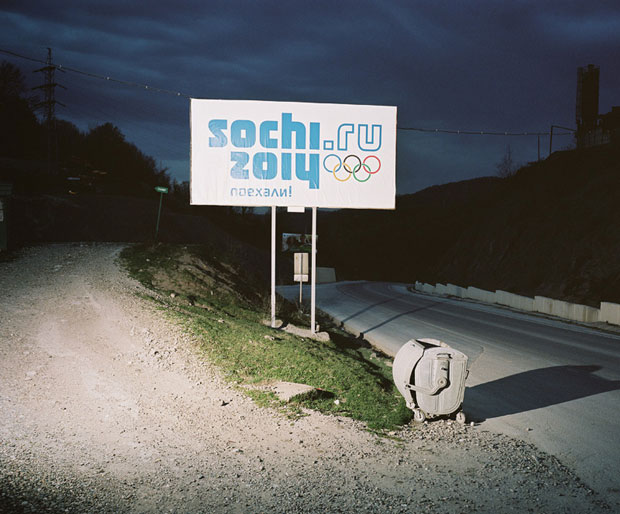 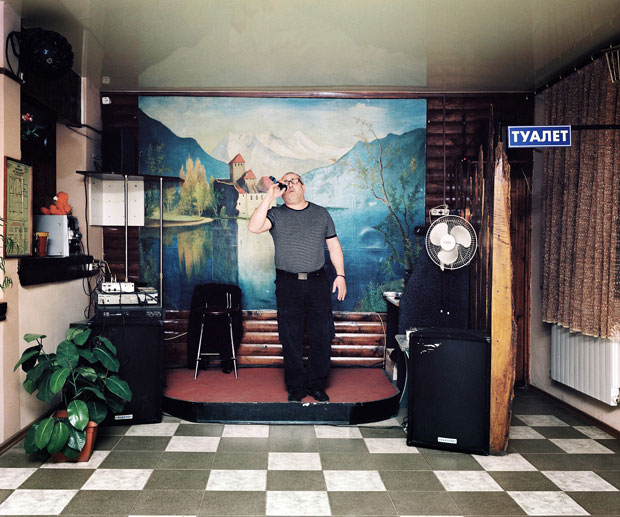 Greater Sochi sprawls for some 145 kilometers along the shoreline, attracting predominantly Russian holidaymakers who come for the sun, sea, sand, and nightlife. Restaurants are plentiful and competition is fierce. Most provide entertainment. The singers come from all walks of life and are of all ages. Some perform in one place all year round, others move from restaurant to restaurant during the summer season. 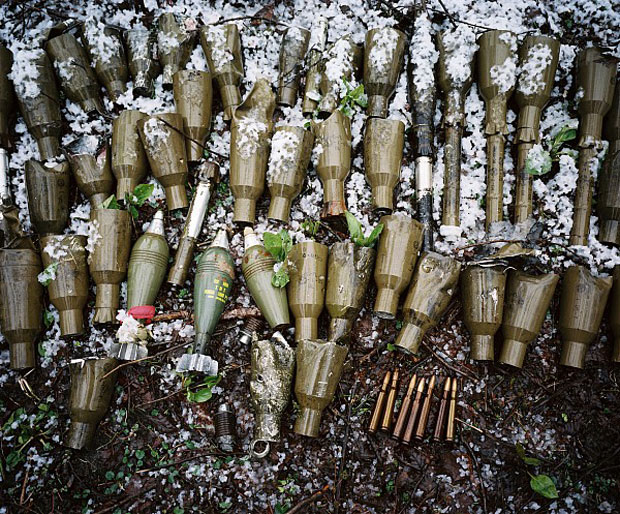 Over the past decade, the English NGO Halo Trust has completely cleared Abkhazia of mines and loose ammunition. Kodori, Abkhazia. 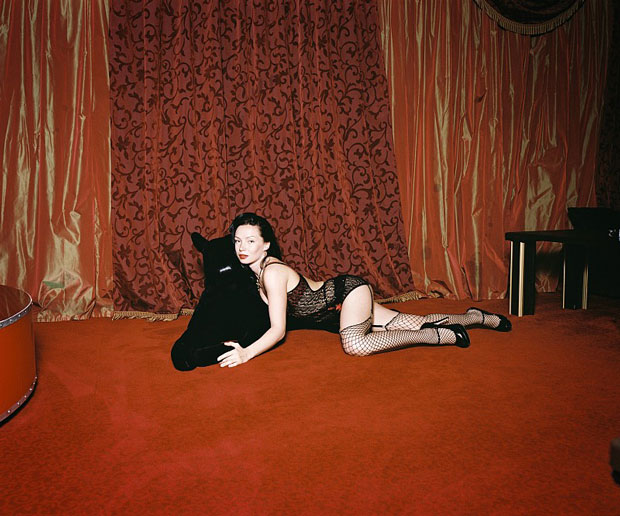 Built in 1978, Zhemchuzhina (meaning “pearl”) is a sprawling Soviet hotel on Sochi’s beachfront. It is its own world. In addition to 956 rooms, the complex encompasses eight restaurants, 14 bars, two nightclubs, shops, a swimming pool, a theater, and a billiards room. You can spend all day swimming laps in the enormous saltwater pool, lying on the beach, dining in the numerous restaurants on the promenade, or lounging on an artificial peninsula in the center of the complex. 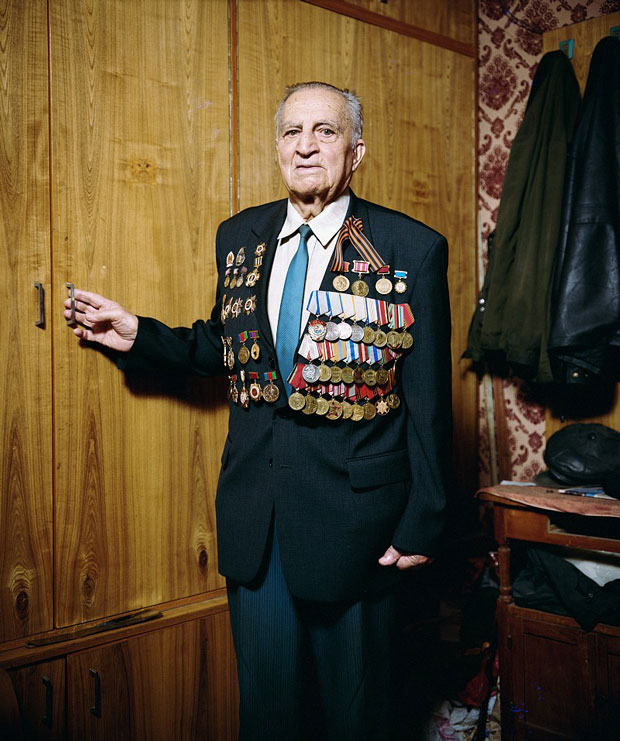 WWII veteran Viktor Buryanov worked for Sochi’s municipal transport department after the war. He is now retired and lives in a block of flats with other veterans and otherwise privileged retirees. 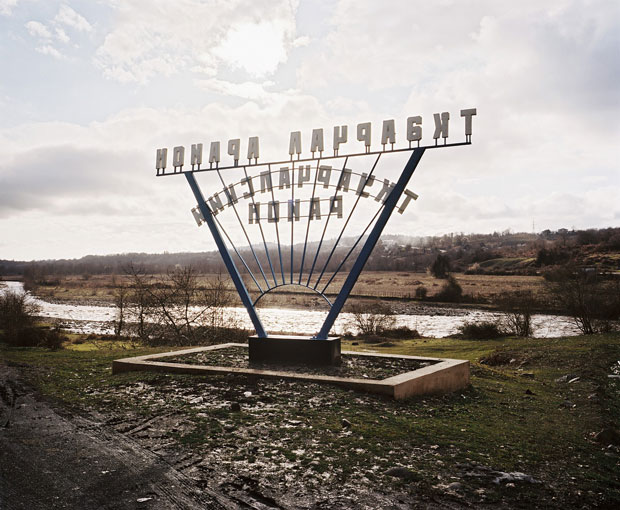 Once Tkuarchal was a flourishing mining town with more than 25,000 inhabitants. Since the 1990s there’s no work anymore. The number of people living here is lower than 5,000. 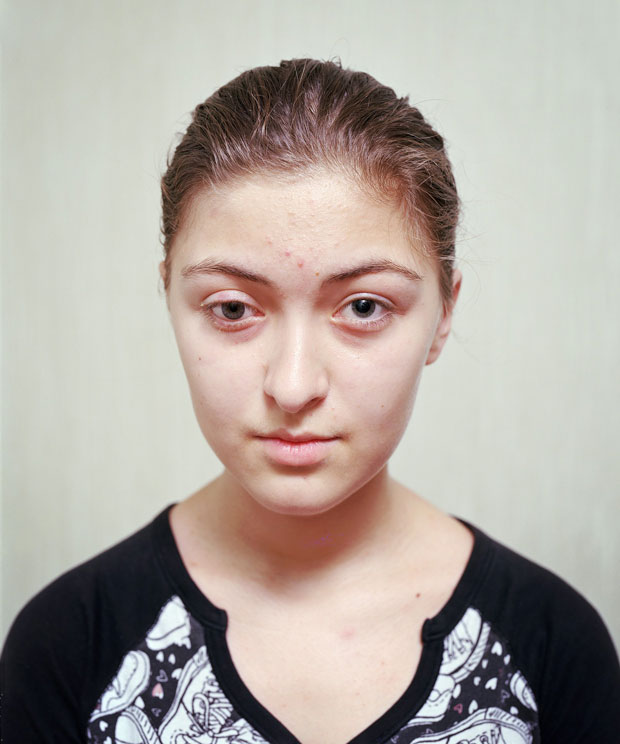 “Sometimes when it’s dark at night, I become paralyzed with fear. I see masked men entering my room.”—Ilona, Beslan. 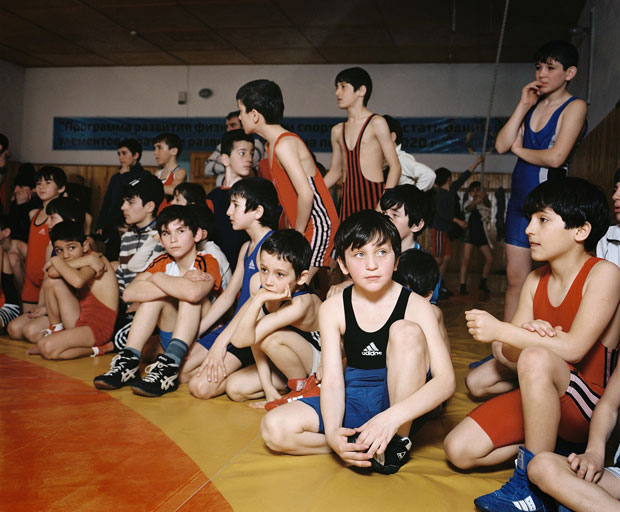 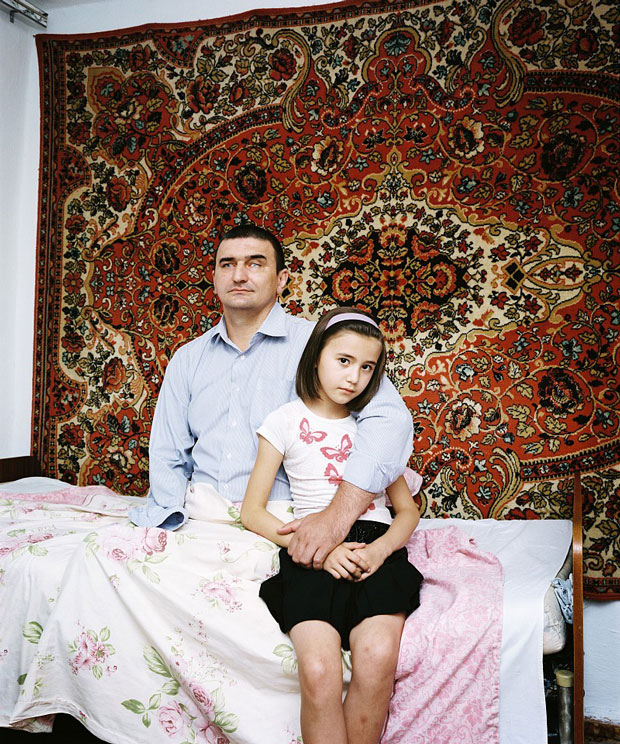 Police officers often fall victim first by the violence in the North Caucasus. 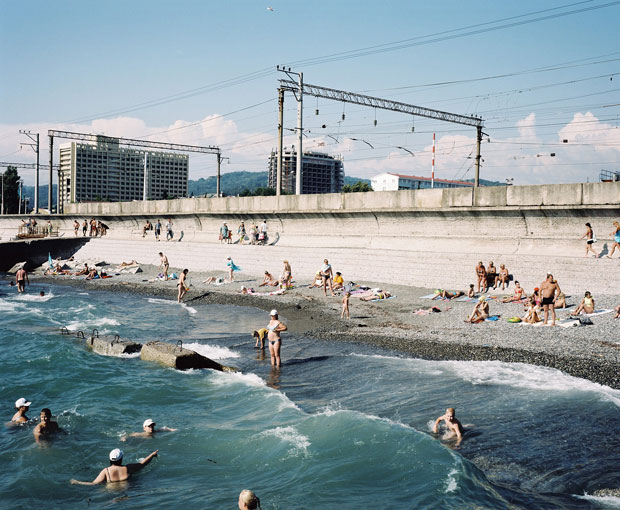