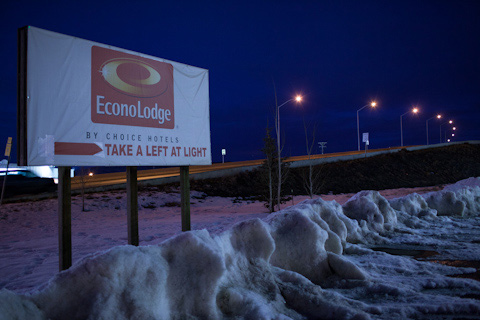 Evanston, Wyoming. A motel sign near the overpass where Timothy Gray was found on December 29th, 2012. Evanston is a small town in southwestern Wyoming near the Utah border that’s a common pit stop for truckers and transients, with over 12 motels.

At the end of 2012, NYC-based photographer Elijah Solomon Hurwitz read a news story that left him with a slew of questions. A few weeks later, he set off for a hard-up cowboy town in Wyoming to answer them, leading to his series The Winter of Timothy Gray. He says, “I was looking for clues into the life of Timothy Henry Gray, a homeless man whose body was discovered under a railroad overpass by a brother and sister trudging up their favorite sledding hill.” Gray had died of hypothermia at the age of 60. Inside his tattered wallet, police found an ID, a California phone number written on a crumpled piece of paper, and a cashier’s check for $54,000. “Headlines the next day read, ‘Potential heir to $300 million Clark copper fortune found dead, homeless.’ He was the legal great-grandson of reclusive NYC heiress Huguette Clark.”

Hurwitz found dead ends with both the local cops and resource-starved newspaper. Instead, his inquiries led to The Classic Lodge, a modest apartment complex where Gray had lived for nearly ten years where he met the manager of the building, George who had known Timothy “as well as anyone in town, which is to say, not terribly well,” says Hurwitz. So why did Hurwitz seek to posthumously document the reclusive life of Gray? He says, “I wanted to understand, how did a man of means end up sleeping under freezing bridges? Why had he left everything behind one day? How does someone just fall through the cracks?” 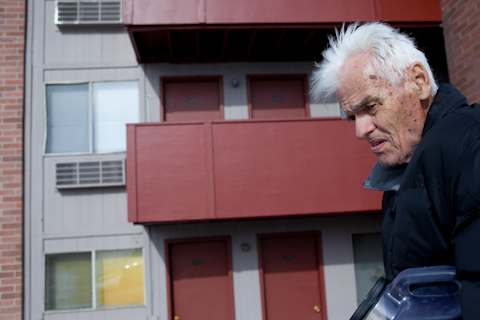 Ken, a neighbor of Timothy’s; “Oh, he died? Hmm, I didn’t ever really speak with him, except you know, ‘hey, how are ya, lousy weather huh?’ I’ve been here ten years…used to be a chef. Yeah, folks pretty much keep to themselves. Sometimes someone’ll get drunk and lonely and invite you over; but this younger generation, they swear too much. It wasn’t like that in my day.” 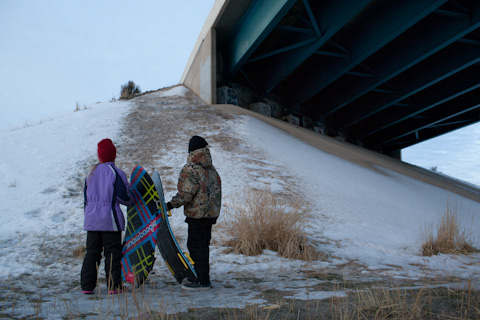 Kaiden, 13 and his sister Amber, 10, look towards the railroad overpass where they found Timothy Gray around 1pm on December 29th. 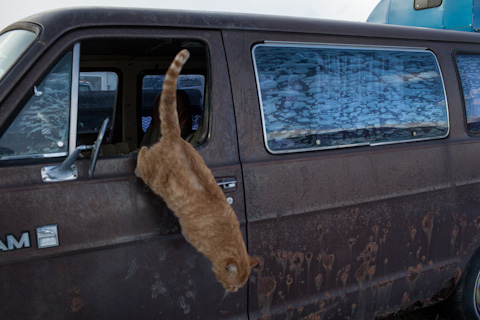 A feral cat leaps from a van in a junkyard where Gray sold copper, gold and aluminum. Says George Riker, “If Tim saw someone coming towards him he’d turn around and walk the other direction. He was…spry. A snappy stepper. I admire a snappy stepper.” Riker speculates Gray might have fed the cats living in this junkyard. 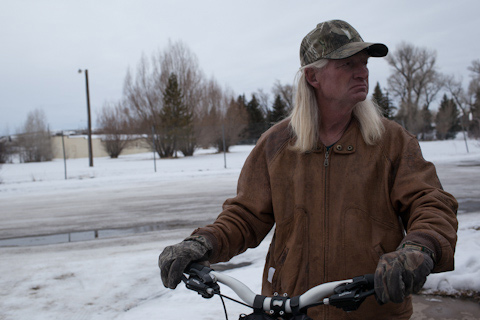 Sherman, another resident of the Classic Lodge in Evanston, WY, where Gray lived since 2001. “I’ve lived here a few years. Maybe saw him around a few times, but we never talked.” 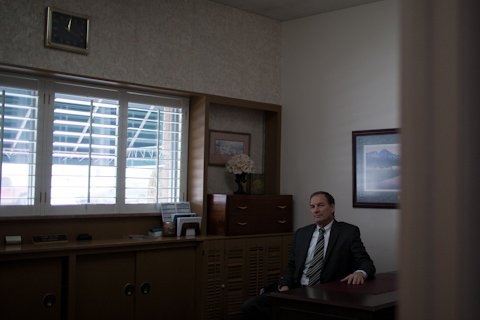 Coroner Bill Crandall at his funeral home office in Evanston, Wyoming. Toxicology results are pending but Crandall says the apparent cause of death was hypothermia, with no foul play suspected. 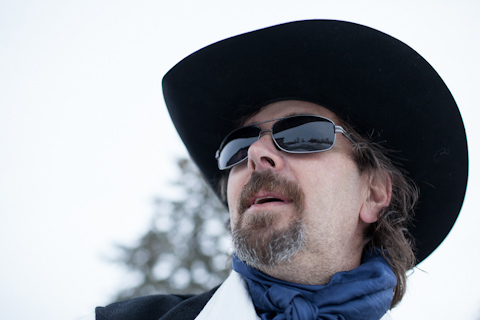 George Riker looks towards The Classic Lodge, which he and his son Ryan have managed since 2006. “Tim lived here since 2002, before he went off on his Howard Hughes phase. He only ever talked to me and my son. Never did I see him talk to anyone else. He was a complete loner. But sometimes we’d shoot the breeze or talk mechanics.” Riker says he never had serious problems with Gray as a tenant except for sporadic complaints from other tenants about him digging around in the dumpsters at night while wearing a hoodie. “I kept a little distance from Tim, you know? But I’m taking this whole thing to heart…I’m gonna try to say hello to people in the building more.” 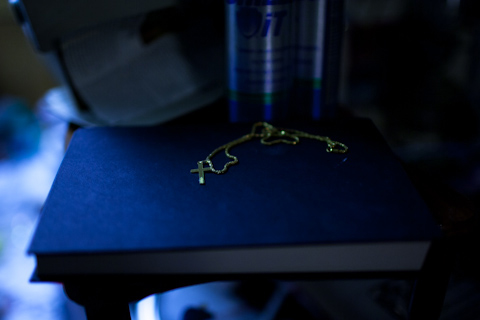 Items left behind in Gray’s apartment in the Classic Lodge. 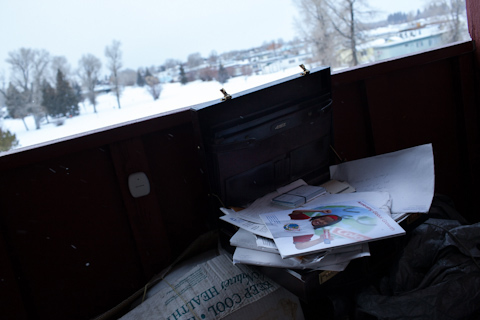 Snow falls onto Gray’s old balcony and a briefcase containing checkbooks, annual reports and dividend checks for companies such as Colgate-Palmolive and Johnson & Johnson, and IRS tax forms. George and Ryan cleared huge piles of scrap metal from the apartment and balcony, but left untouched anything that looked important. Another briefcase in the apartment carried a boilerplate response letter from Republican Senator Craig Thomas addressed to Timothy, which read, “Good Morning Timothy, and thanks for taking the time to contact me regarding President Bush’s proposed tax cut package. As you may know, I have consistently supported efforts to reduce the federal tax burden on working Americans…removing the double taxation on corporate dividends…has been particularly controversial…While some tout tax cuts as a give away for the wealthy, I disagree.” Dated April 10, 2003. 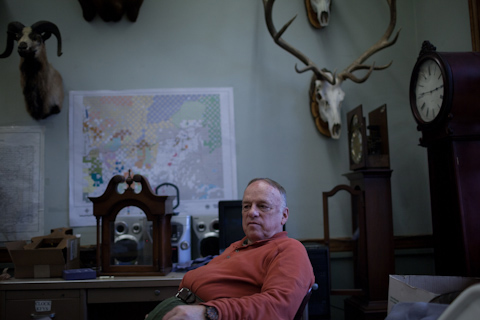 Rick Sathers, owner of the office building and Sather’s Jewelry. Sathers also had sporadic interactions with Gray, generally only seeing him when he made rent payments of $110 per month. “He was fastidious. Never missed a payment. I think he mostly used it as a place to have mail sent, but for a time he was doing work. Something with computers and voice recognition, and I remember when he found out someone else had already done it, he was upset, because his plan was to be first in that.” Rick described him as paranoid, often whispering in conversations, “He was kinda spooky, and he’d come in at odd hours, but he’d never do anything to hurt anyone. There used to be AA meetings in the basement here, I think that’s why he wanted this office. I also know he sponsored some kids in Africa, maybe Sudan.” 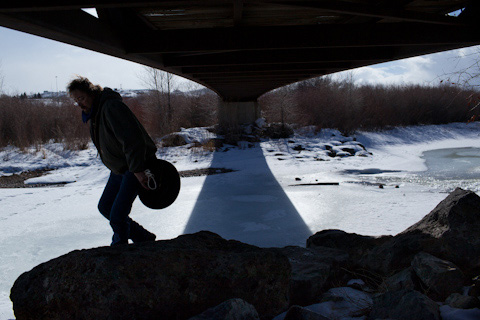 George walks over rocks near Bear River under a bridge where he sometimes found Timothy seeking solace. George recalls fishing here one spring, when the water levels were higher. “I shimmied down the rocks with my fishing pole, and heard a voice behind me from under the bridge. Scared the shit out of me. It was him, and apparently we scared the shit out of each other. I caught a seven pound brown trout that day.” George recalls giving Timothy an old fishing pole years ago, but never saw him use it. 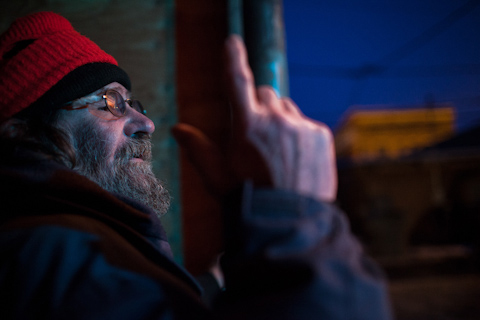 A homeless Vietnam vet in Evanston who encountered Timothy several times but asked not to be named. In between quotes from Hunter S. Thompson, he described meeting Gray in the fall under the same bridge where he was later found dead. “I first went up there to see about moving into Suite #3. That’s what we call the spaces between the cement pillars. But Tim was already there, and he wasn’t very welcoming, so I went elsewhere.” He described a handful of encounters over the fall; “I never saw him rise from his bedroll; I wasn’t sure he could even stand up. I tried once to bring him some clothes, and it was like ‘he wanted them but didn’t want them.’ On Thanksgiving I tried to get him to come get a hot meal in town, but he wouldn’t budge. I eventually asked if he intended to stay under that bridge all winter, and he said to me, ‘that wouldn’t be practical.’ I had heard rumors that he had money, so I figured he’d make for California when it got cold. I didn’t figure this would happen. There’s no excuse for it.”