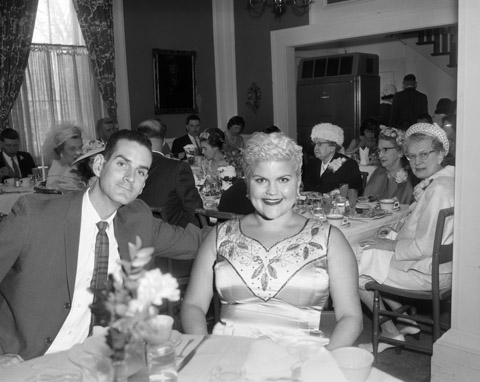 Photographer and Indiana University Northwest professor Jennifer Greenburg has been gathering vintage negatives for years. In her work Revising History, Greenburg appropriates these black and white images by digitally inserting herself as a main character, mimicking the gestures of the moment and the clothing of the period. By circumventing someone else’s photographs and calling them her own, Greenburg exhibits the innately false nature of memory and the family snapshot. 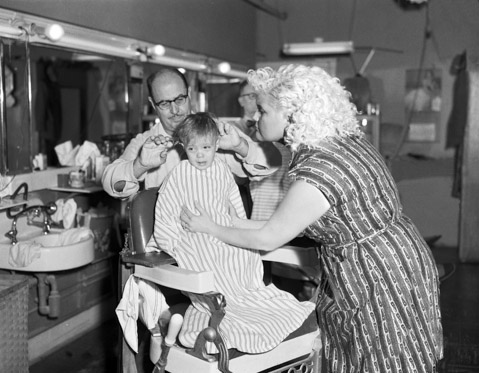 I think a lot of artists collect old photographs as there is a sort of mystery and unknown to them. What made you decide to insert yourself into someone else’s memories?
“When I look at someone else’s life though the lens of someone else’s camera, I create my own stories. I have done this as long as I can remember. Usually when someone shows you their photographs, they cannot help but narrate the images. I ignore that narration. Instead, I make up a fantasy in my own mind. I idealize everything– becoming quite nostalgic– even if the subjects in the photos are completely unknown to me. I prefer a wistful interpretation. Photography is an interpretation of what is in front of the lens. Yet, as a culture, we rarely acknowledge that. We still believe that what we see in a photograph is truthful.

“The fantasy of all photographs is what I am commenting on through my work. By placing myself in a time and place that could not possibly be real, I address the concept that the lens does not hold much, or any, truth.” 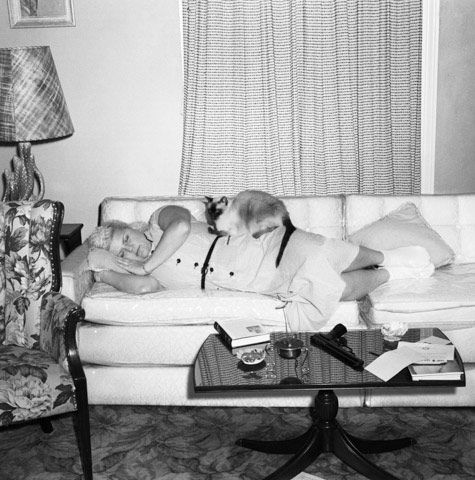 You have said that Revising History is about the fantasy of family snapshots and the way we remember past events. How do you feel your work illustrates this?
“I know that memory is often replaced with something the photograph has sold to us. I have a vivid memory of something that happened to me when I was 6 months old. I could not possibly remember that moment. It would be developmentally impossible. The clarity of this memory is most likely something my mind generated as a result of seeing photographs of that moment. The photograph created a memory that wasn’t really there.

“Another example is when you take photos at a party. You want to take some photos to remember where you were, and who you were with. And what happens? No one wants to have their picture taken. You take one or two, and then you lose your audience. Your friends want to go back to their conversations, not continue to take pictures. Yet, when you post them on social media the next day, everyone wants to see all of your photos and asks, ‘Didn’t you take any more?’ The lackluster attitude is quickly forgotten, and so are the actual details of the party. Maybe the party was actually just ok. But if the photos are good, the party will go down as the greatest party that was ever held.” 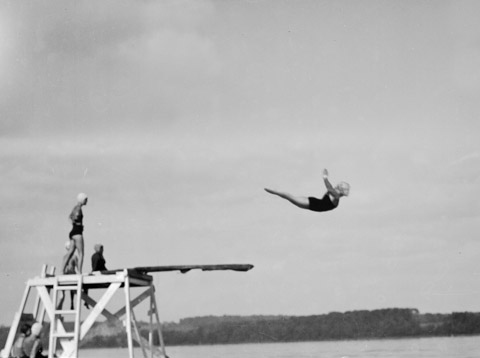 Diving off the shores of Lake Michigan, 2012

You disappear flawlessly into these vintage photographs. Talk a little bit about the process and technical aspect of inserting yourself into photos that are decades old.
“Discussing the technical process is a detraction from understanding the work and looking at the actual images. The concept I am working with is hard to come to terms with for viewers. You mean you can just remove me from my own photographs? Though the images are funny, they are also somewhat disturbing. To escape the hard truth, everyone wants to know about the technical process. Somehow, it’s believed, that if you knew how I did it, it would make the concept easier to come to terms with. This is not something I want to facilitate.” 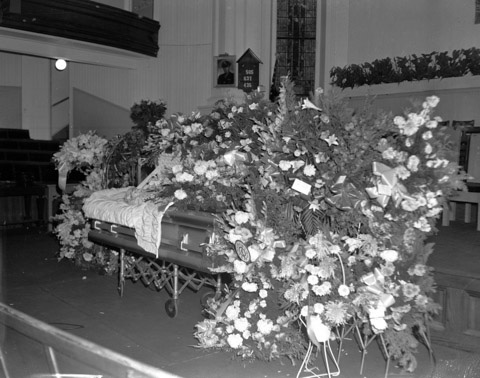 My Funeral is an image that reminds me of when Tom Sawyer fantasized about dying under his young lover’s windowsill and the mournful events that would follow if he were to die. I think we all have envisioned what that day will be like. What made you choose that image?
“The history of photography is filled with post-mortem portraiture. When the camera was in its earliest stages, the exposure times had to be very long. Making clear photos of live humans was nearly impossible because people could not sit still enough for a long duration of time. Photographs of people in their coffins could be made easily because of course the body was no longer in motion. Often, the only clear photo taken in a person life was taken on the day of their funeral. I wanted to reference that history. Revising History is filled with small references and winks at the history of photography. Me, modeling the latest fashions for Russeks Department Store, 2012, is a nod to Diane Arbus because her father owned Russek’s Department store, and the department store is where she met her husband Alan Arbus.

“I also chose to make, My Funeral, 2012, because it is the most deceptive of all the images in the series. It is the one that could not possibly be real. Again, people get very uncomfortable with this work. Individuals who believe that I have not actually used found photographs interrogate me regularly. My funeral, 2012, is the one that is undeniable. It is both dark and completely absurd, which is a combination that I quite like.” 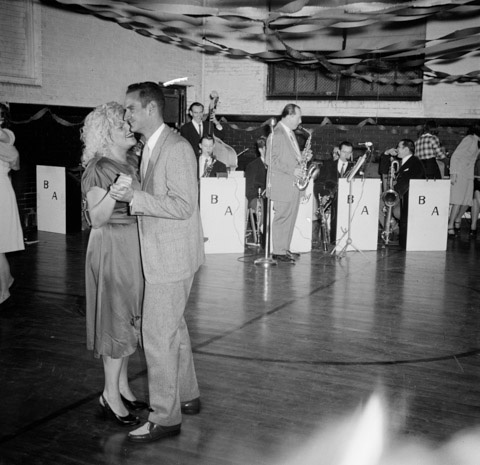 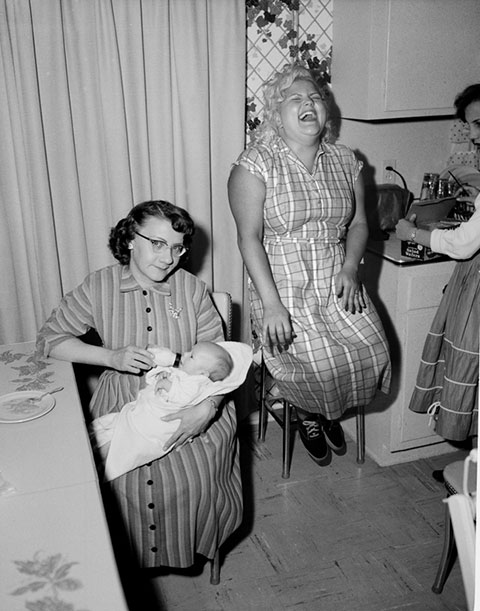 Something funny happened in the kitchen, 2011 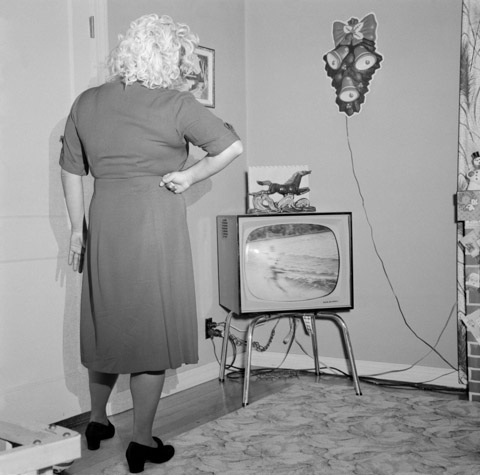 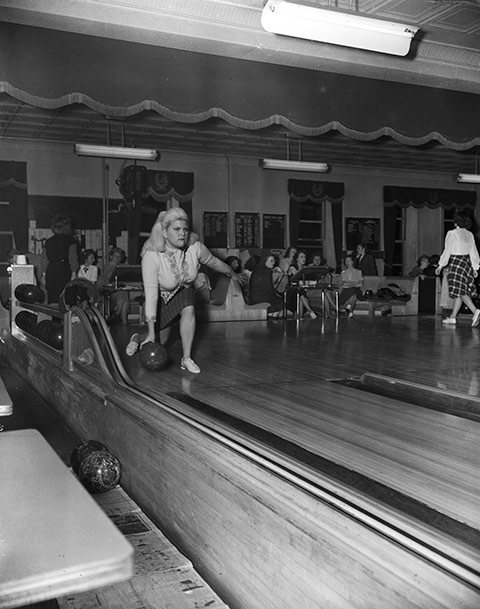 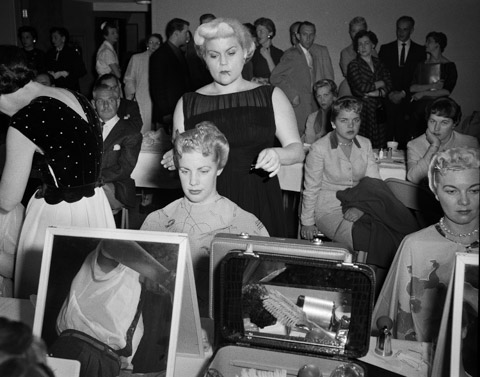 My dreams came true the day I did hair for a fashion show, 2013