This Photographer Will Give You Serious Wanderlust (Sponsored)

Looking through ILL GANDER’s portfolio is a bit like looking into the future. Always on the go, this photographer has captured everyday life along the bustling railways of Jaipur, under the neon signs of Shanghai, and in the busy streets of Hanoi. He’s watched the sunsets over Puerto Vallarta and explored the mountain villages of Peru, and in many ways, he’s just getting started. Not only has he captured a melting pot of cultures, languages, flavors, and colors, but his interest in everything from old-school film to cutting-edge camera technology makes him a powerful voice for the modern age.

When the photographer set out to create a website, he did it with Squarespace, the all-in-one platform. Take a peek at his homepage, under the ILL GANDER, and you’ll find yourself transported into a universe of vibrant photos of dynamic videos. He’s also made some of his most popular images available for download as wallpapers for the device of your choosing.

Whether he’s traveling to the other side of the planet or simply hanging out with friends, the artist approaches everything he does with an infectious sense of curiosity. He’s not afraid to play around and experiment with new subjects, new materials, and new perspectives, and at the same time, he remains steadfastly focused on his business goals–a combination that’s resulted in campaigns for leading brands worldwide and publications in major magazines and newspapers. We asked him to tell us a bit about his journeys, his forward-thinking approach to photography, and his formidable online presence.

Why did you decide to build your own website, and what were you looking for when researching different website builders? Why did you select Squarespace?
“My website is really the only place I can show my work the way I see it in my head. It’s the least restricted and most beautiful place my work can live. Instagram has become a wasteland of mediocre imagery, grossly compressed video, and tasteless advertisements. I chose Squarespace because of the John Malkovich campaign. Just kidding. Those videos were gorgeous, though. In all seriousness, Squarespace is the easiest way to showcase my work online exactly how I want it to look, without having to write any code. I’m also super aware of speed and compression. Device specific image optimization is such a blessing. My site always loads fast on every device and internet I’m on.” 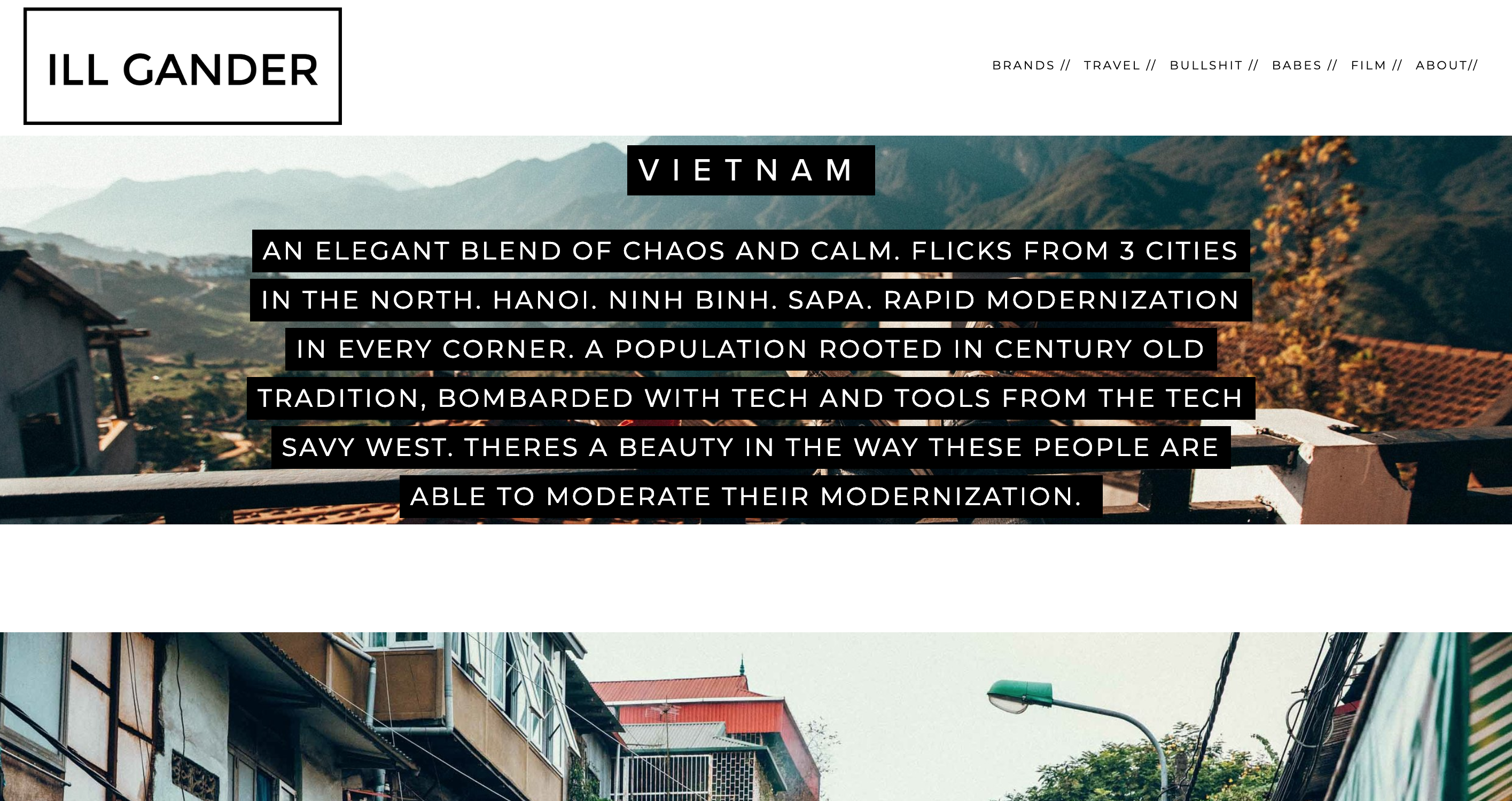 We love website design and the movement on your homepage. Why did you choose video backgrounds?
“It’s like the Harry Potter newspaper concept. It’s an old reference at this point, but in the first Harry Potter film, there’s a scene where this guy is reading a newspaper, and all the images move slightly. Kinda like a Live Photo on iPhone, actually. I’ve been thinking about that ever since the movie came out in 2001, and finally technology is close enough where it is possible on the internet. I’m excited for a future where still photos feel like old technology. Everything moves just a little. I want my site to feel like that future.”

Tell us about Mobile and Desktop Dopeness. What gave you the idea to share these wallpapers through your website?
“I returned from one of my first international trips and just wanted to make a few dope wallpapers for my iPhone and computer. My friends starting asking for the same images to use on their phones as well. It wasn’t long before I thought maybe I should just create these ‘packs’ and give them to anyone who wants them. The business side of me thought maybe it’d be a great traffic driver for my site and Instagram, and I really just wanted more people to have access to awesome imagery for their device backgrounds.”

How do you curate your homepage and the other sections of your website, and what kinds of responses have you gotten?
“I try a lot of content and see how it looks next to each other. Trial and error, really. A lot of people are stoked on the motion component. I get lots of surprise too when I say it’s Squarespace with no custom code.”

How has coming of age as an artist in the digital age influenced your outlook?
“As my career began, so did Instagram, and, in the beginning, it was an amazing way to share with others. Everyone was figuring it out and pushing together. Now, though, it’s so easy to get lost in the sauce of comparison and envy. As I was developing, immediate and regular access to pretty much every type of image showed me there aren’t any real rules to this stuff. There are trends, and there are classics, and it’s all right there to influence every image-maker. I think it gives everyone a democratized way to show what they can do, which is unbelievable. There are so many super talented photographers and cinematographers that can quickly rise because everyone can see what they are doing; however, I think if you rise quick, you fall quick, so maybe there’s still something nice about the old way.” 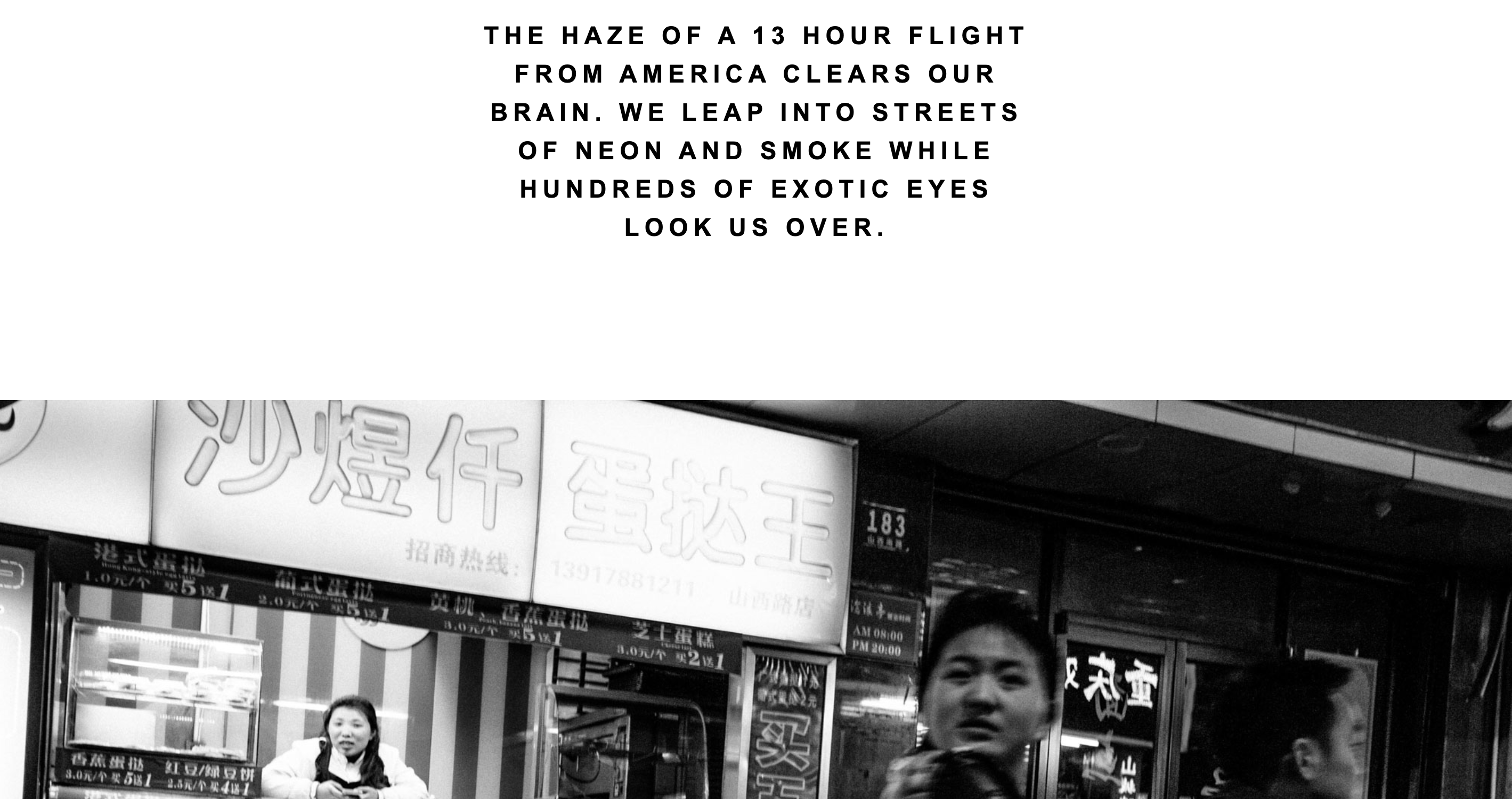 What’s the coolest place you’ve photographed so far?
“I love Asia. Pretty much everywhere I’ve been on that continent is incredible, specifically north Vietnam. I spent some time in Hanoi, which has the pace of New York with the infrastructure of rural India. The streets and buildings seem to be an ever-evolving conglomerate of building materials and techniques. So much color and texture. A half-day bus ride takes you to SaPa, a perfectly picturesque farming valley with a quaint hillside backpacker town. Best sunrise and sunsets I’ve experienced.”

What about people? Tell us about one of the most interesting or inspiring people you’ve met on your travels.
“I was in this small Italian fishing town last summer, Manarola. I ended up on a boat with this guy Lorenzo. He grew up in this little town, left to be a marine biologist, and lived and traveled all over the world. Had a full career. He missed home, so moved back and built this gorgeous boat and is now a captain for hire. The friends he grew up with have also moved back, and together they run the best seafood restaurant in the town, catch everything they cook there, and cruise the ocean in this boat. Pretty magical. Moments like that, for me at least, make you think about what really matters. This dude had it made but chose to move back home and drink good and eat good with his best friends.”

You take tons of photos, many of which I’m sure we never get to see. What does your editing process look like? What makes an image stand out to you?
“There’s this quote, ‘A picture should represent what you saw but also how you felt while taking it.’ That’s my criteria.”

You shoot on everything, from film to cell phones. Why is it important for you to master different techniques and experiment with new ones?
“No matter what tool I have in my hand, maybe because of circumstance or strategic choice, I want to be able to show others the beauty I see. There are so many tools out there, and they all have these little positives and negatives– these little personalities–that, if understood, can add a lot to the imagery. I think it’s important to know and understand as many of these as possible, so what you use to shoot really contributes to how you show what you see.

“I’ll simplify with a story. My buddy Vikram, an amazing photographer and filmmaker, just shot fashion week in Paris on an old Super 8 camera. Black and white film. Really imperfect imagery. Much different looking than reality, but it has a personality. The camera and film have a personality that perfectly complimented the location/lighting/subject, and therefore the final piece was so much stronger. If he shot on iPhone or RED or ARRI or something, I don’t think it would have been right.”

Do you approach the campaigns you do for brands any differently than you do your personal work?
“They are different, for sure. Personal work for me starts so broad. Maybe I see a photo of a place or hear about a landmark, and I book a flight and figure out the story as I go. There’s risk and uncertainty. Maybe I come back with nothing compelling, and that’s okay. I will have learned something regardless. Campaigns are a different animal. I get it. There’s more money on the line. Deadlines. Objectives. Multiple people contribute their expectations for the finished product. All this is to say that campaigns are less of a gamble for everyone involved because a failure in the interest of experimentation and potential unexpected greatness just isn’t worth it. I take the risks with my personal work, though, so I can repeat it without failure on a campaign.”

I’m sure you get this question all the time, but let’s talk about your name. How has being a photographer influenced the way you see, look at, gander at the world in general?
“Ah yes, ‘the name.’ In the beginning, I wanted to create a brand of sorts so that I could more easily evaluate and evolve what I was doing. I could stand back and see this body of work as objectively as an outsider because, even though I made it, it became part of this other thing once it was complete. It helped me separate my business mind and artistic mind. It worked in the beginning, but now it’s really a reminder in everything I do, and on every trip I take, to keep looking.”

Get started with your Squarespace website today and use the code FEATURESHOOT to get 10% off your first purchase.