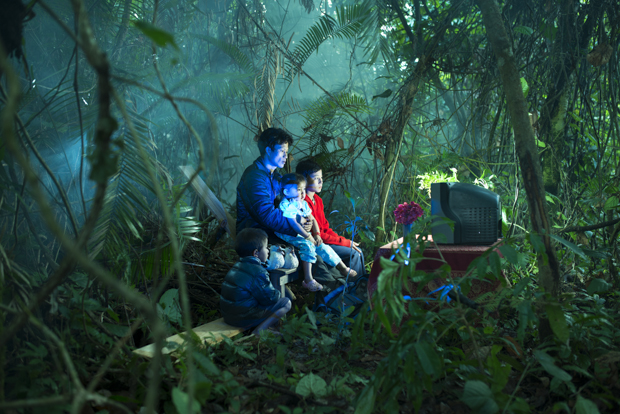 FORMAT19: FOREVER//NOW — the UK’s leading contemporary festival of international photography — is underway in more than 30 venues throughout Derby. Organized around the polarity of the eternal and the ephemeral, the 2019 edition of FORMAT explores the profound power of photography and its impact on the world today.

The festival features a series of exhibitions, talks, photobook market, portfolio review and awards that delve into the ideas of “Forever” and “Now” and finding the dynamic that exists between the two. As technology has democratized the practice of photography, some have discovered a love/hate relationship with the cultural obsession for documenting and sharing just about every detail of our lives, creating the magical mythos that the Internet is forever — and never forgets.

On the other side of the coin we finally have begun to speak about “fake news,” a long-standing practice of the power structure known to any student of history. Our current fixation with the practice comes at a time where virtually anyone can introduce any narrative into the game — a democratization of information that’s impact reigns far and wide, calling attention to the significance of integrity, credibility, and veracity in an increasingly appearances-based world. Welcome to the new now. 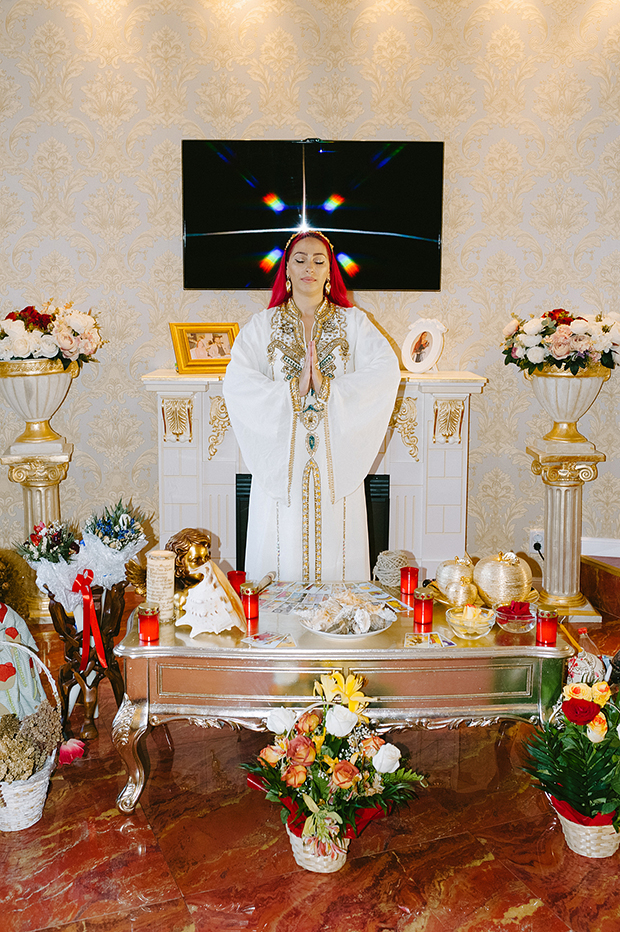 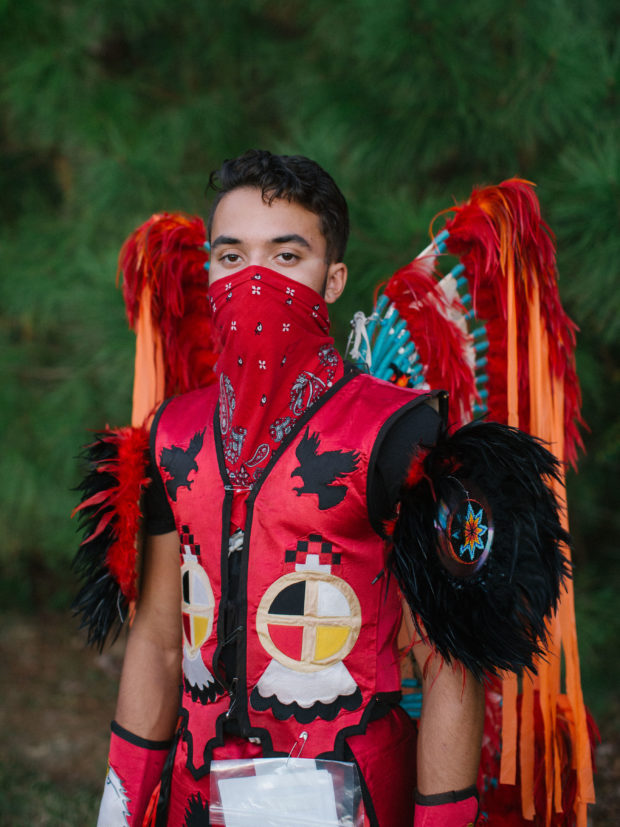 Documentary project looking at the lives of young Native Americans in North Carolina.

“You Don’t Look Native To Me” In 2011, Romanian photographer Maria Sturm began visiting the town of Pembroke in Robeson County, North Carolina — the tribal seat of the Lumbee Indian Tribe, where 89% of the population describe themselves as Native Americans. Through a combination of portraits, landscapes, architecture and still lives Sturm documents the lives of Lumbee youth, exploring their individual and collective relationship to their hometown, aesthetic display of tribal affiliation and their youthful obsession of seeking to define themselves in their own terms. 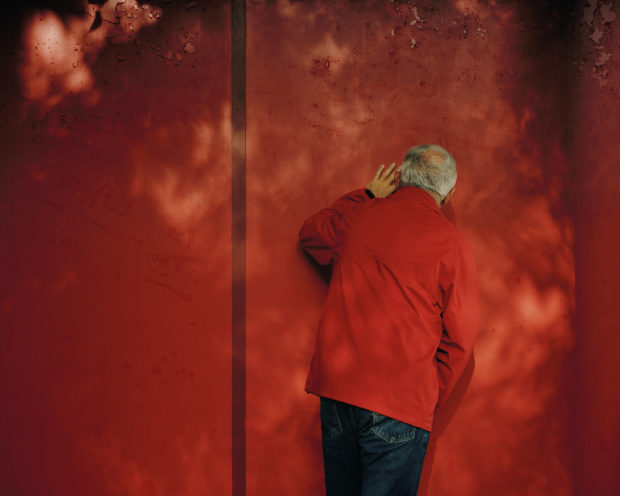 From The Blindest Man
The Blindest Man explores the contradictions of a pursuit which has no answers and no end.
This is the real story of an unsolved treasure hunt, in which a gold sculpture is buried in the ground somewhere in France. The treasure has been hidden for more than 25 years. A community of treasure hunters continue to search for the gold, guided by a book of allusive clues, released by an anonymous author, who has since died.

The Blindest Man by Emily Graham is the true story of an unsolved treasure hunt for a gold sculpture buried somewhere in France. For more than 25 years, treasure hunters have sought this elusive prize, guided by a book of clues published by an anonymous author, who has since died. The competition was designed to be solved within a few years, but things did not go as planned as competition and obsession fuelled rumors, misinformation and red herrings. But this hasn’t stopped the hunters as Graham discovers the precarious nature of interpretation and pursuit, and the photograph’s ambiguous relationship to truth and information. 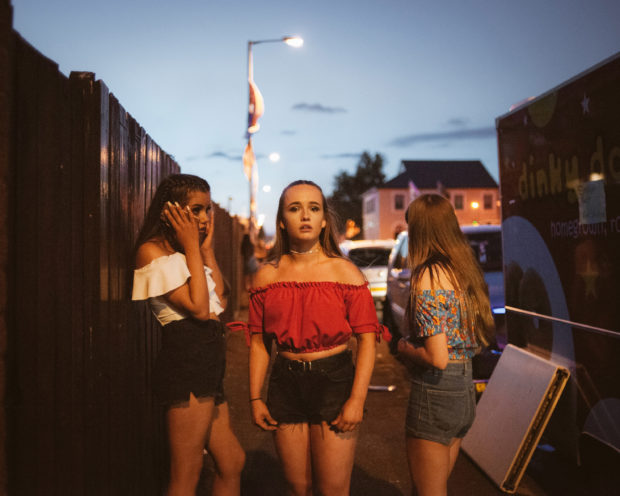 Girls group, 11th Night Conway St bonfire celebrations, Protestant Loyalist Shankill area, Belfast, Northern Ireland 07/2017The youth of Northern Ireland have a word for people who stand on the opposing side of a debate and it is “themmuns”. Whether a catholic or protestant, they use the same slang word. They also have a word for members of their own community, namely “ussuns”.

Themmuns by Jens Schwarz follows the daily lives of the youth of Catholic republicans and Protestant loyalists in Northern Ireland, which lies at the center, or more accurately at the backstop, of the UK’s negotiations with the EU over Brexit. No matter which side of the divide one falls upon, the youth of Northern Ireland have a word for people who stand on the opposing side of a debate and it is “themmuns” — as opposed to their own group, namely “ussuns.” Here Schwarz considers just how similar both sides actually are. 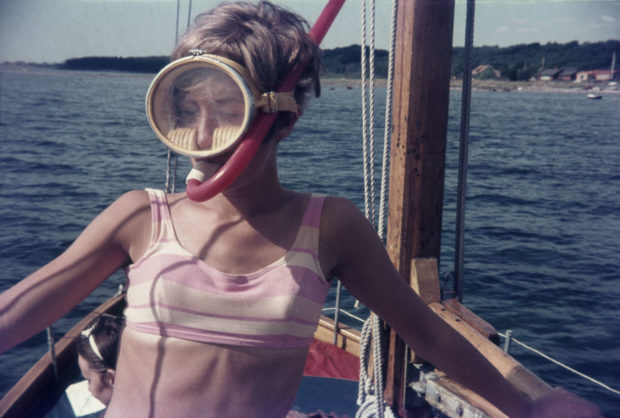 Who are all these amazing women asks Caroline Furneaux as she dips into a box of 35mm slide photographs, taken by her father in the 1960s.
To Furneaux they look like off-duty movie stars on holiday with her Dad – some are labelled in his familiar angular hand, Scandinavian Trip Summer 1961; Teneriffa Nov ‘68′; Våren 1969.  Furneaux imagines all the lives he must have lived before she was born, even before he had met her mother. These are the mothers she might have had; sporty; curvy; coy; animal loving.

The Mothers I Might Have Had by Caroline Furneaux looks at the women her farther photographed back in the 1960s and wonders who they are, imagining all the lives he must have lived before she was born, even before he had met her mother — to examine the ways in which we create secret stories about ourselves and the world and consider the ways in which fantasy shapes our most intimate beliefs. 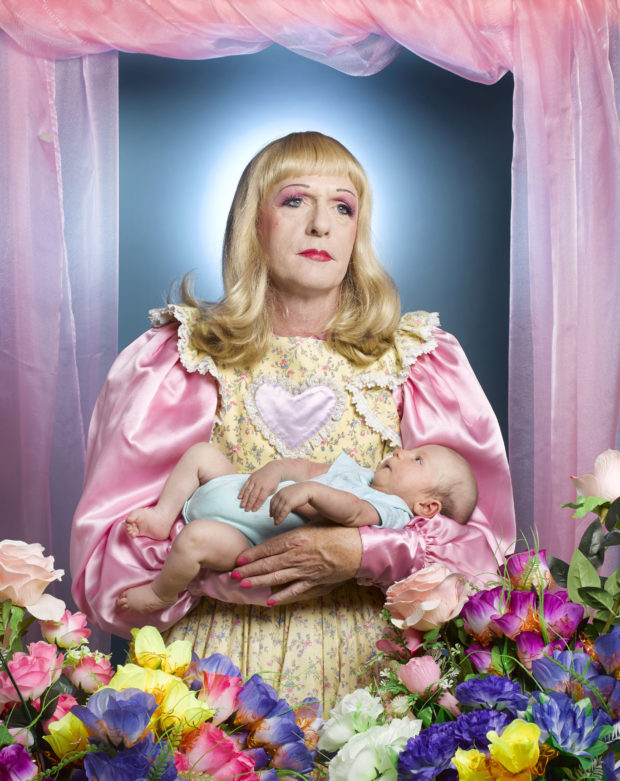 Birth by Richard Ansett is the product of a five-year collaboration with artist and Turner Prize winner Grayson Perry developing his photographic persona. Here Perry returns to the inexhaustible motif of Mother and Child presenting an alternative to the heteo-normative. 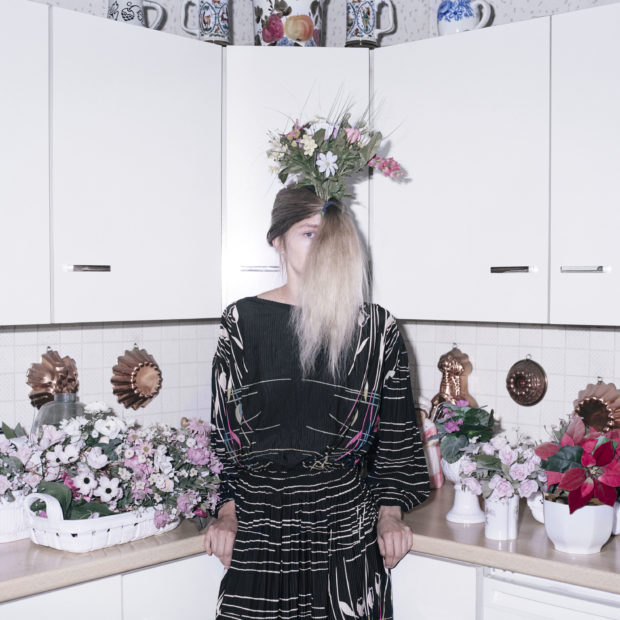 Nina Röder’s If you have to go you still want to stay became a record of the clearing out of her grandparents house after their death. Through a series of surreal and absurd performances by her mother and cousin, made for the camera, her grandparents possessions were incorporated into a new memory, a celebration of their lives and a document of our own grief at losing them and our own past. Flowers

Wenn du Gehen Musst Willst du Doch Auch Bleiben [Have to go, Want to Stay] by Nina Röder. Once upon a time, Franz & Theresia Protschka lived in Windsbach, Germany, for nearly 60 years after being expelled from Bohemia in the Czech Republic following the end of World War II. Though they built a new life and a new home, the trauma of leaving and losing all their possessions stayed with them and it became almost impossible for them to throw anything away. In this series, Röder records the artist’s process emptying her grandparents home of their possessions following their death in a series of surreal and absurd performances by her mother and cousin to celebrate their lives and create new memories to counterbalance the pain of loss. 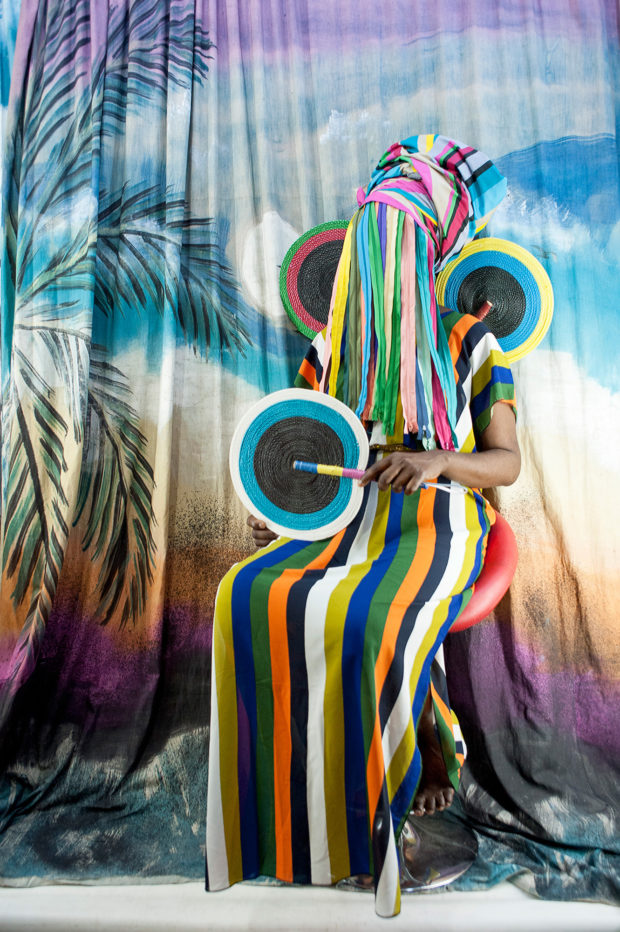 On Exotization, Victimization, Hypersexualization and other – zations by Gloria Oyarzabal explores the connections between gender, history and knowledge in order to rethink our received modes of cultural and social observation with particular reference to Africa and colonial empires. Imperialists imposed European ideologies of gender and feminism onto most African cultures to their detriment. Here Oyarzabal begins to rethink gender as a Western construct. 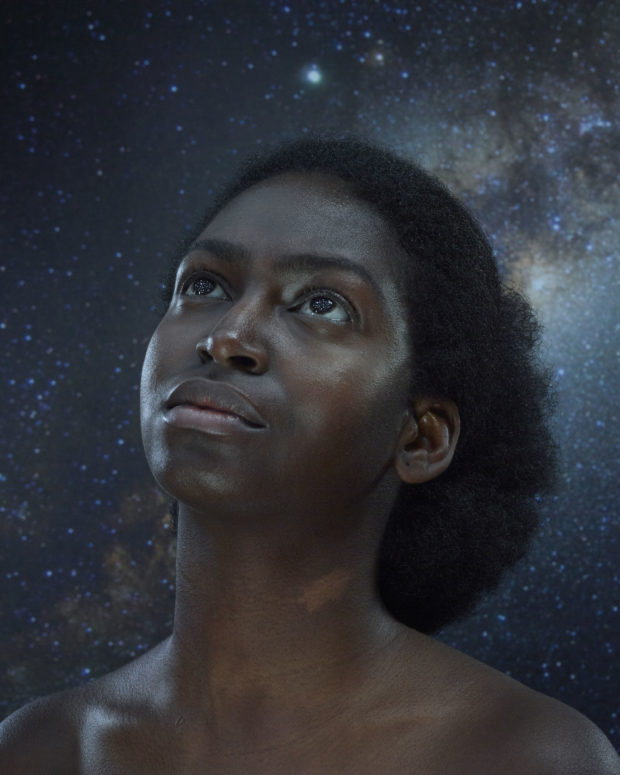 This ongoing series is an exploration into some of the ideas behind what is real or what reality may be and the role photography plays as a technology and observer in creating this reality.

Of Swallows and Ravens by Steven Barritt is an exploration into some of the ideas behind what is real or what reality may be and the role photography plays as a technology and an observer in creating this reality. Touching on subjects from quantum mechanics, astronomy and mathematics to philosophical questions of the self and consciousness via cybernetics, space travel and science fiction, photography and its relationship to the real is examined and questioned. 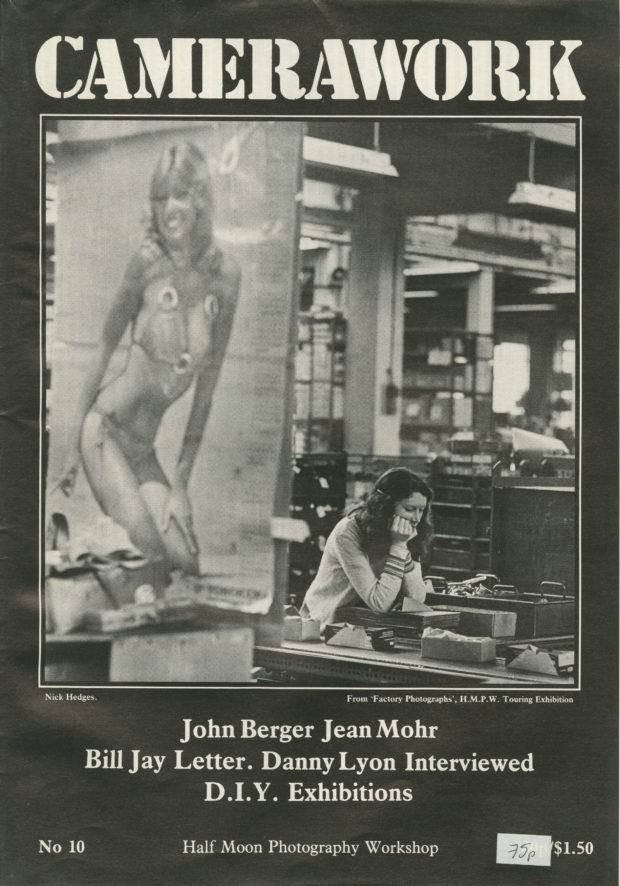 Cover of the photography magazine Camerwork

Radical Visions: Camerawork Revisited by Four Corners and Peter Bonnell reactivates the archives of Camerawork magazine (1976 – 1985). Emerging from the 1970s community arts movement, Camerawork eschewed prevalent views of photography as a specialist practice, instead asserting the medium’s potential to effect social change. In the UK.A forum for critical debates on representation and the use of photography in oppositional politics, it offers a unique insight into a turbulent era in British history that has significant parallels with today. Radical Visions brings together original material from the Camerawork archives alongside recent work by six documentary photographers including Nicola Muirhead, Fiona Yaron-Field, Joanne Coates, Rob Clayton, Les Monaghan, and J A Mortram.