A Moody Portrait of the Manhattan’s Intoxicating Wilderness at Twilight 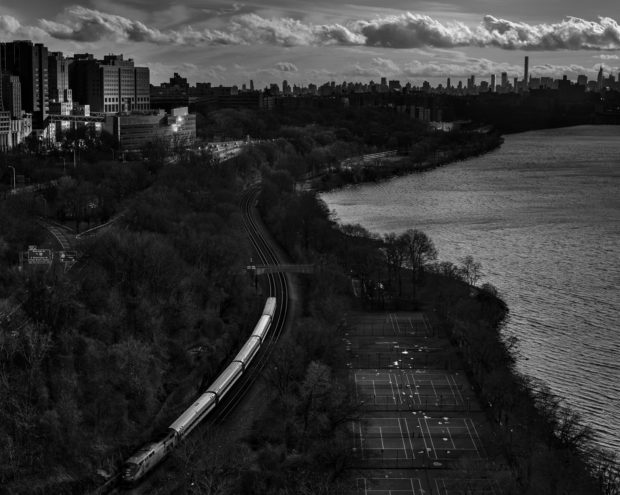 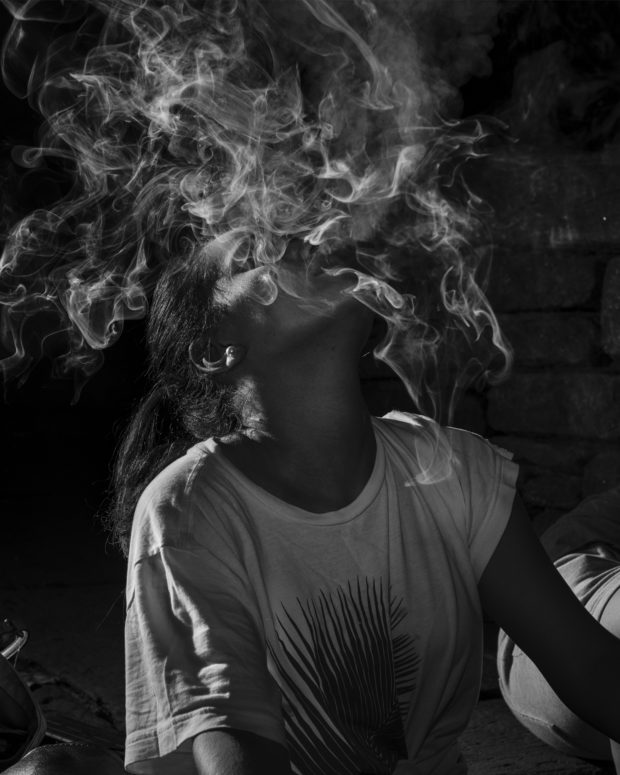 At the northernmost tip of Manhattan, an oasis lies: a natural preserve that takes the form of Inwood and Fort Tryon Parks. Located to the north and south respectively of Dyckman Street, the parks are hidden gems nestled deep within the neighborhoods known only to locals.

When American photographer Adam Pape moved from rural southeastern Virginia to Harlem, he discovered a new world, which he has captured in the stunning monograph Dyckman Haze (MACK). The photographs, made after the sun goes down, cast the landscape of upper Manhattan in a mystical, ethereal light, wherein all sense of the New York you thought you knew slowly slips away. In Dyckman Haze, Pape goes off the grid and disappears into another world, one filled with local inhabitants that gentrification has not yet removed. It is a portrait of New York that natives know, that curious netherworld between day and night where nothing is quite what it seems. Here Pape takes us on a journey into the heart and soul of Manhattan’s outer limits. 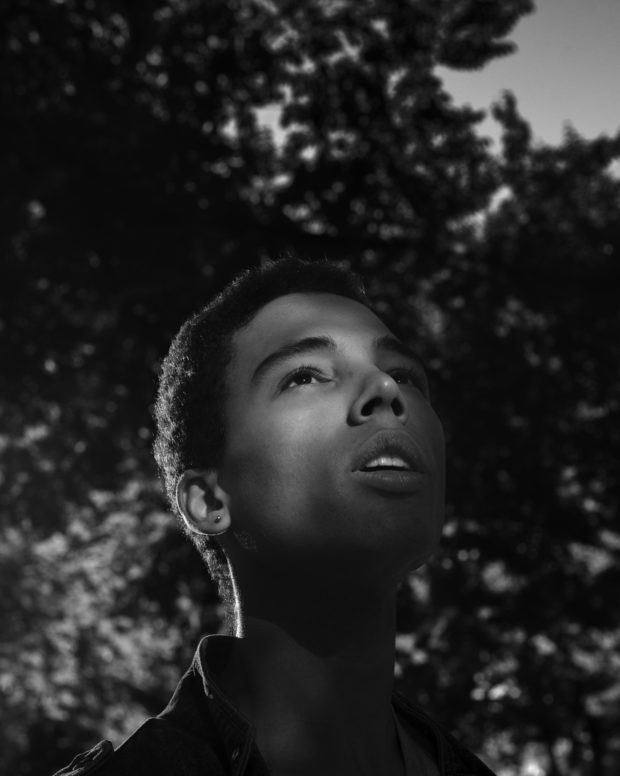 For people unfamiliar with the area, how would you describe Inwood and Fort Tryon Parks?

“Fort Tryon Park was created by David Rockefeller and the Olmstead Brothers firm, the firm was formed by the children of Frederick Law Olmstead the designer of Central Park. The park’s design follows in the tradition of the romantic ideals Olmstead conceived for the landscape: the public should feel they have left the city behind and in awe of their natural surroundings.

“In Fort Tryon and Inwood Park you find winding dark paths under a roof of dense foliage leading to an incredible view of the Hudson and the epic cliff faces of the Palisades across the river. It was funny to find out that when David Rockefeller bought the land to make the park he also bought the land across the Hudson so the view would never change. It seems even when you think you’re experiencing an authentic natural landscape, it is still thoroughly considered and constructed, the park in some ways is like walking through a Hudson River School painting from the nineteenth century or a diorama of nature.”

Could speak about the inspiration for this series of photographs?

“I’d say the pictures were inspired from a moment of desperation. I lost a close friend in a bicycle accident in Brooklyn a few weeks after arriving in the city, and along with other struggles of adjusting to a new place I didn’t feel in anyway grounded to New York. But wandering with a camera in the green spaces around Washington Heights and Inwood offered some solace. I began to feel connected to the city through the people I met in the park and getting to know the landscape.

“The ultimate moment of fruition was when I was making these black and white landscapes I came across a skunk in Fort Tryon Park. It seemed to be this perfect animal that embodied black and white and, of all places, they were running rampant in a park in New York City. You would come across 20 or more a night in July or August. It seemed truly absurd. Out of fascination and seeing if I could do it I began to photograph the skunks in the park when the sun was going down. I became some sort of urban wildlife photographer, but it also gave me another way to be present in the parks in the neighborhood. I became known as ‘the skunk photographer’ but I also began to make pictures of all the other citizens that came to the park around sun down.” 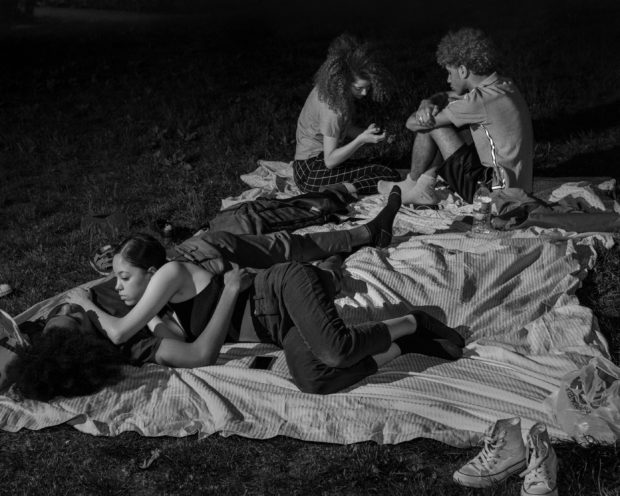 Could you speak about the importance of having this massive natural preserve and landscape park replete with a medieval museum at the tip of Manhattan — and what it provides to the community?

“Public space is essential to all communities in cities. It’s important for the city to consider how public space can truly function and be used by all its citizens. What I saw in Inwood and Fort Tryon was both nature and the public finding their own uses of the park, but not necessarily how it was intended.

“The park provides an open space in the shade to host bingo games or birthday parties, a place for teenagers to evade the eyes on the street and smoke hookah or pot, a place to fish from the Hudson River, or a place to find solitude. Jungle gyms became dancing props or stairs a stage. A picture I made that is so tied to the idea of dysfunction/ function is of a lamppost that has been rewired with an extension cable and has an iPhone charger emerging from it. Even when the space isn’t functioning for the public, the public will find a way for it to function. Much like the skunks running around in the summer eating garbage, it’s far from Olmstead’s ideal landscape but the native fauna have found a way to survive in this space as opposed to the rest of Manhattan.

“There’s also a layering of histories in this landscape. Native Americans camped in this area, fishing from the Hudson and Harlem Rivers. Legend has it that the island of Manhattan was ‘purchased’ from the Native peoples by the Dutch under a tree in Inwood Park. Fort Tryon was a site of a battle during the Revolutionary War, and the Cloister Museum in Fort Tryon was built out of imported European medieval ruins, what seems like David Rockefeller’s way of layering an ancient Western history in the American landscape. One citizen’s use of the park might be determined from which history or lore you attach to the space.” 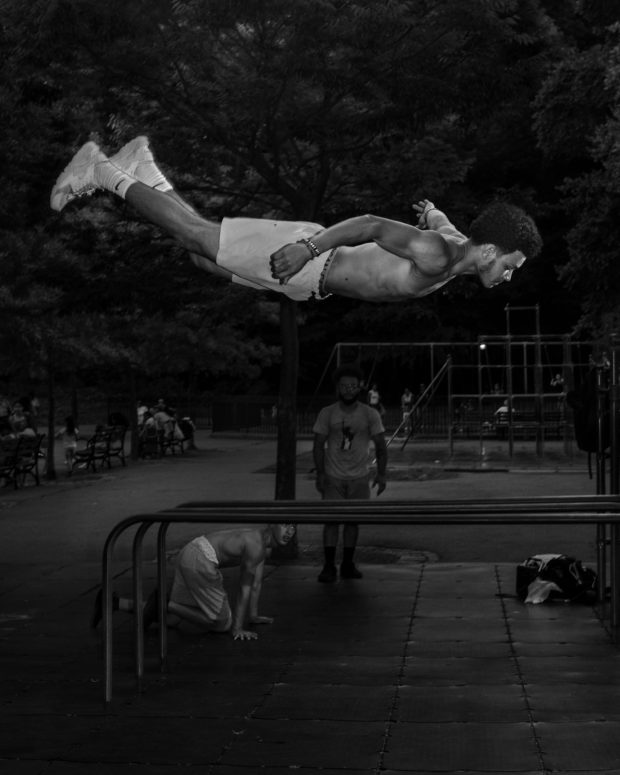 Were the photographs made exclusively in the evening/at night, and if so, what was it about this time that spoke to you?

“Once I adjusted to the city and was working full time I only really had nights and weekends to make pictures. But it was also continuing to photograph the skunks that brought me out at that hour. They’re crepuscular, which means they’re twilight animals, so that was one reason to be there at sundown. I stood out with my flashes on a stand and long lens so it gave me a way to easily meet others who were out in the park at dusk and after.

“The night time also has a way to inspire the imagination, for better or worse, for what can be found in the darkness. I love the early twentieth-century nocturnal architecture drawings by Hugh Ferriss for this reason. In his drawings the buildings of New York are carved out of the darkness of night by the electric light of the city, and to this day electric light renders New York a perpetual twilight. The monochromatic picture is another type of twilight. There’s no real temperature, its neither day or night, winter or summer because there is no color to clue us in. It’s like the black and white picture is a type of purgatory. A liminal space just like the park.”

At what point did you realize this series of work was a book, and what was were the larger thematic ideas, motifs, or narratives that you wanted to explore and connect throughout the book?

“I feel there was always a narrative quality to the work due to the dramatic lighting I used in a lot of the pictures. The lights brought a cinematic quality, so it seemed right to figure a sequence of the pictures that had a narrative arch. The sequence started out with some of the more bucolic landscapes of the park, clouds suspended on the Hudson after rain, sunlight across leaves over water, and from there the views go deeper in the park and become later at night. It shifts from the initial view of the idyllic landscape to one that seems almost otherworldly. The skunks are punctuating the sequence as a type of levity. They are a sort of guide through the pictures that stitch this world together.

“Working with the designer Morgan Crowcroft-Brown at MACK the cover was another way to play with expectations. Using the portrait of the woman hanging upside down was a way to disorient the viewer when they first picked up the book, what was up or down, front or back, and then you open with the landscape with the train heading north that puts you right in the city, the city you’re about to leave behind.” 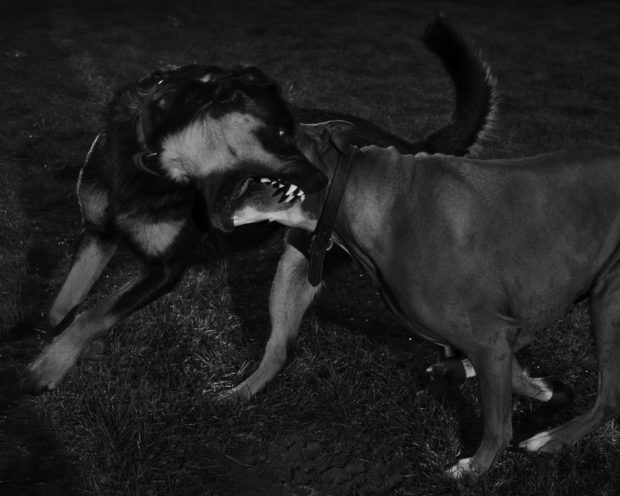 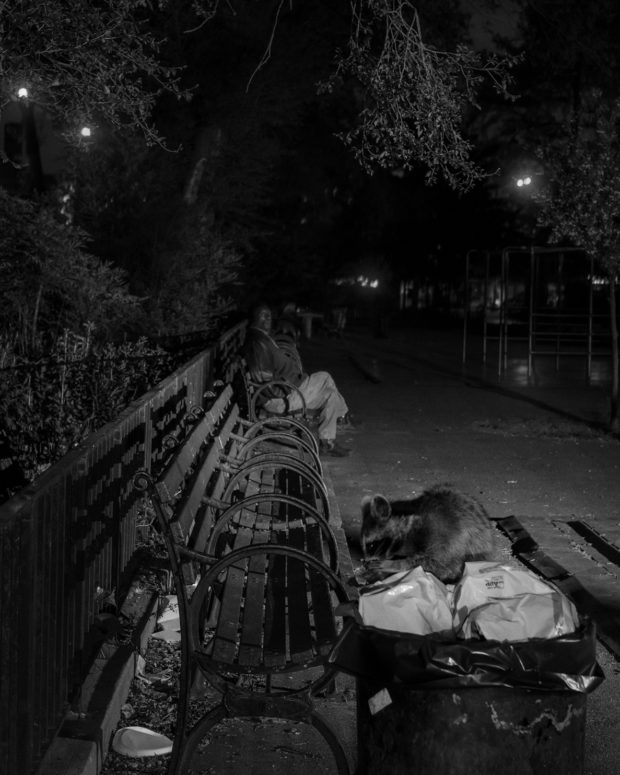 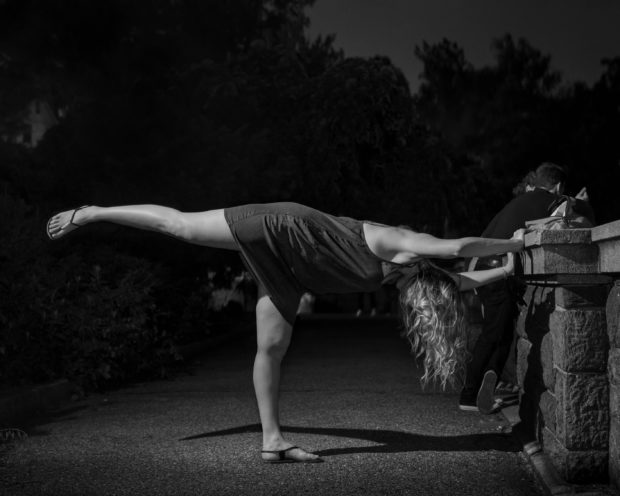 All images: from Adam Pape, Dyckman Haze (2018). Courtesy of the artist and MACK.