A Devastating Portrait of Genocide in Myanmar 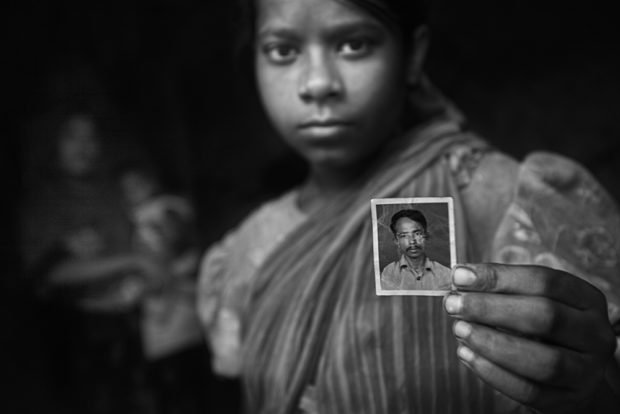 The Rohingyas tend to do what are known as ‘3D’ jobs – those that are Dirty, Dangerous and Degrading. Some employers further exploit their dire situation by paying Rohingya workers, such as these working on a high-rise construction site in Malaysia, very low wages or no wages at all. 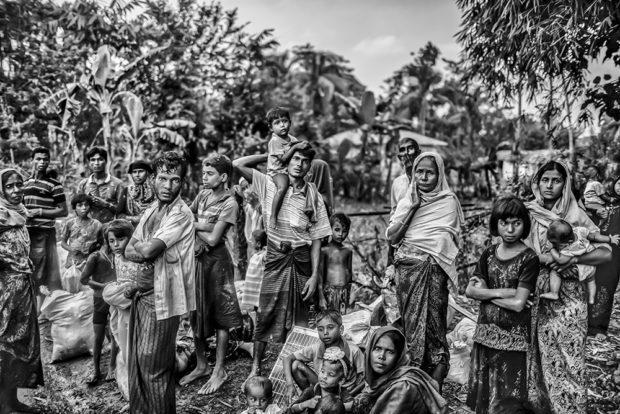 The Rohingyas arrive in Cox’s Bazar, Bangladesh, escaping from the 2017 Rohingya persecution in Myanmar. 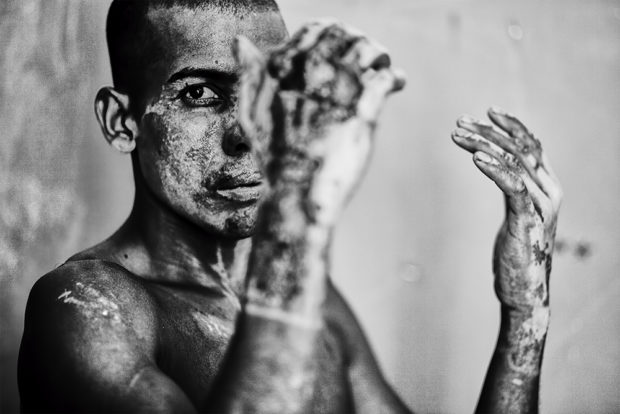 In 2011, Sheikh Mohammad arrived in Malaysia and took a job in a tyre recycling factory. Not long after, he suffered an accident in the factory, which caused third- degree burns on over 60% of his body. He received no compensation from his employer, nor assistance towards the cost of his medical treatment. He also lost his income as he could no longer work. This photograph was taken one month after the accident.

In Myanmar, there are eight “national indigenous races” representing 135 ethnic groups that are accorded protection under national law. The Rohingya people, a Muslim ethnic minority indigenous to the Rakhine State, are not recognized as one of these groups; the Myanmar government views them as illegal immigrants. Since 1982, the Rohingya have been denied citizenship and have been systemically persecuted through a series of government-sponsored pogroms tantamount to genocide.

In March 2008, Bengali photographer, educator, and activist Saiful Huq Omi traveled to a refugee camp, and spent ten days there, conducting hundreds of interviews. What he learned on that fateful trip would change his life forevermore. Over the next decade, Omi entered a shadow world where evil and chaos reign. His determination to bring light to the plight of the Rohingya rendered him one of them, both in spirit and in flesh, becoming a target for persecution himself.

“My anger got the better of me. I was too direct. And so, I was silenced. My voice and liberty were controlled. Now I have apparent freedom, and so I am able to publish this book,” Omi writes in the afterword of 136 – I Am Rohingya (Schilt Publishing).

The title recognizes the Rohingya are the 136th official ethnic group of Myanmar — but it is also something else, something you discover when reading the annotated captions in the back of the book. In June 2012, 136 Rohingya refugees fled to Bangladesh in broken boats. Omi writes, “As soon as they landed, they were pushed back to sea by Bangladeshi border guards. Within hours, all but four disappeared in the wide-open sea. No one knows what happened to them.”

As of August 2017, an estimated one million Rohinga were living in Myanmar. By that December, some 625,000 had fled to Bangladesh as a full scale campaign of ethnic cleansing began on the 25th of that month when the Myanmar military and local Buddhist extremists joined forces to rampage the northwest Raknine State.

“I packed my bag and jumped on the story within 36 hours,” Omi writes. “My live video blogs on Facebook began to reach millions. I was photographing, shooting my film and deep down inside, I was screaming with anger. The world had yet again failed so badly to protect its most vulnerable people.”

Journalists became de facto targets for documenting the atrocities. Omi was no exception. “I also remember how powerful people wanted me to be silent,” Omi writes. “My encounters with arrest, detention, and death. I now know how it feels to have a bayonet at your throat at three in the morning in the middle of a deep forest. I now know how it feels to almost drown in the deep blue sea and how long it takes for three broken ribs to heal.”

It is this knowledge that is in evidence throughout the book, a painstaking document of a people being erased from the earth today, at this very moment. It is the bridge of image and text that makes Omi’s work so profound, his understanding that the truth exists in multiple planes simultaneously.

His images, stark and graphic, yet beautifully lush, take on new levels of depth with the heartrending histories of horror and trauma. Moving between the photographs and the captions, each story becomes compoundingly worse, as unthinkable agony vibrates from the photographs like a hallucination.

Under the cover of night, an eight-year-old girl has made it to the border fence. Her tiny hands clasping the barbed wire as she looks at the camera with the eyes of one who knows too much. Omi writes, “Her aunt had been gang raped by Myanmarese security forces three days before this photo was taken.”

Her eyes know: there is no escape. She will make it from Myanmar to Bangladesh, just moments after the photograph was taken — but that’s far from the end of the story. There are no happy endings here. The Rohingya are citizens of no land, and unwelcome everywhere.

136 – I Am Rohingya is not without scenes of faith, hope, and love, but the reality for the people is a world that has turned its back so profoundly, these stories almost never get told. While the United Nations has called the 2017–18 campaign as “a textbook example of ethnic cleansing,” no action has been taken on behalf of the Rohingya. It is, ultimately as Omi knows, “The Rohingya have no friends but themselves.” 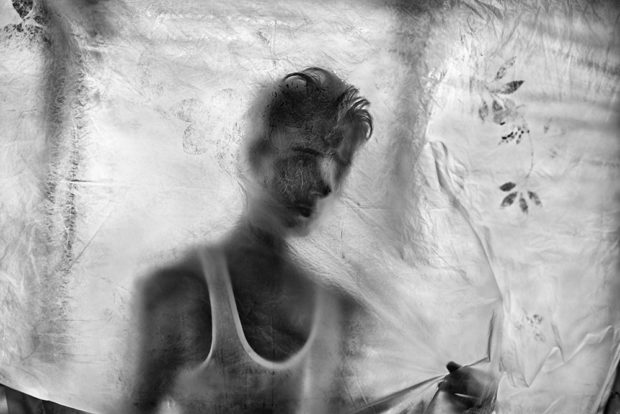 Just a week before this photograph was taken in late 2014, Saydul Islam came to Malaysia by boat. There he suffered debilitating and recurring nightmares about the treacherous month-long journey he had taken from Burma to Malaysia via a smugglers camp in Thailand. 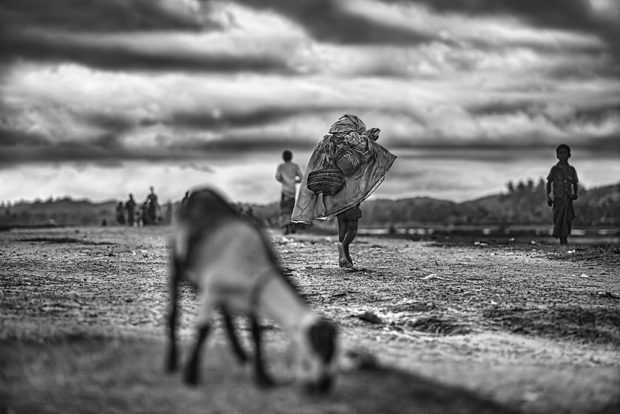 Shamlapur, a locality isolated from the Bangladeshi mainland, has been home to Rohingya refugees for many years. Tens of thousands of Rohingyas have settled here and work as fishermen. 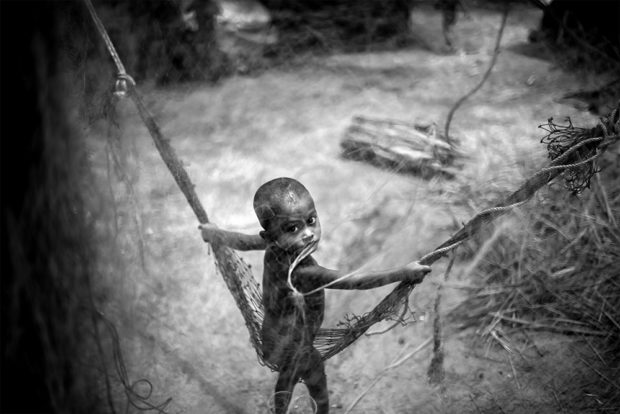 All children are entitled to a name and the right to acquire a nationality from birth. Yet for many decades, the Rohingyas have been a stateless community, be it in Burma, Bangladesh, Malaysia or elsewhere. They are not considered to be legal citizens of any state. Despite the existence of safeguards against statelessness in the domestic laws of some countries, many children, like this boy born in Malaysia, start their lives as children of ‘nowhere’. 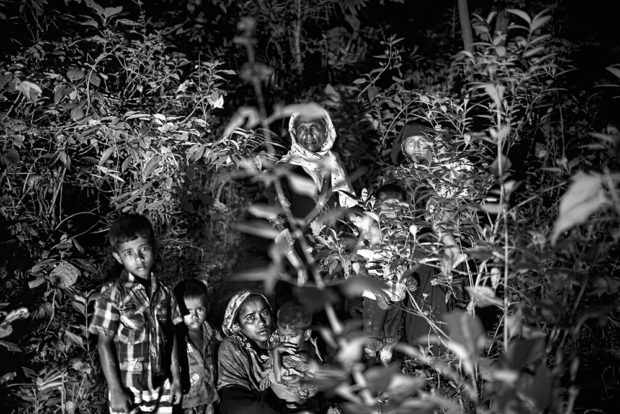 At 3am, this family finally managed to get into Bangladesh. They waited in the jungle for their smuggler to come and take them to a safe house. Shortly after this photograph was taken in 2012, the border guards arrested the entire family for ‘illegally’ entering Bangladesh. The next morning, they were pushed back to Myanmar. 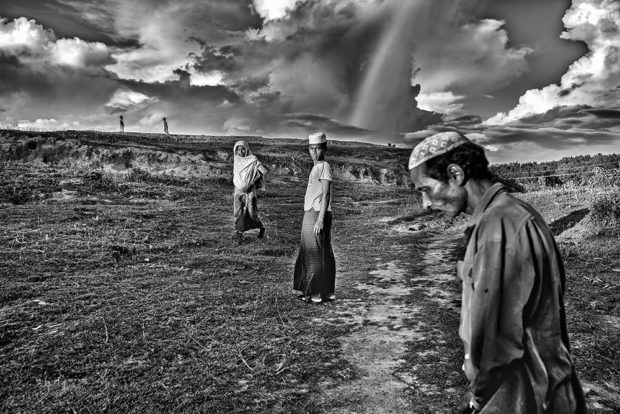 For decades now, Bangladesh has been home to some 32,000 registered refugees living in camps, and an estimated 100,000 unregistered Rohingyas in makeshift sites. A further 200,000 to 300,000 Rohingya refugees live an irregular existence in different parts of Cox’s Bazar and adjacent districts. 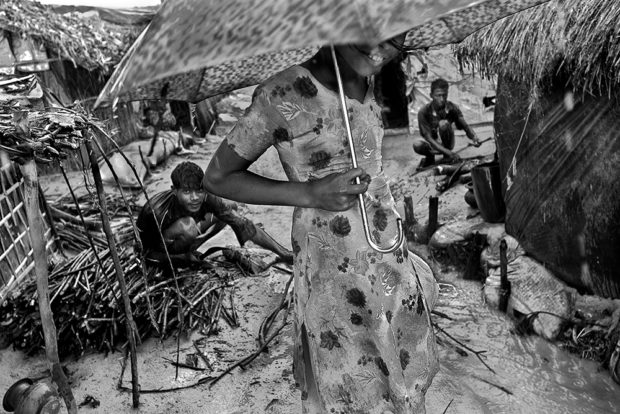 When it rains in the unregistered camps in Bangladesh, the walkways become little rivers. When it rains too much, there is a risk of a landslide as the hillsides have been deforested for firewood. Landslides may engulf the homes of the refugees, but the Rohingyas have no place else to go. 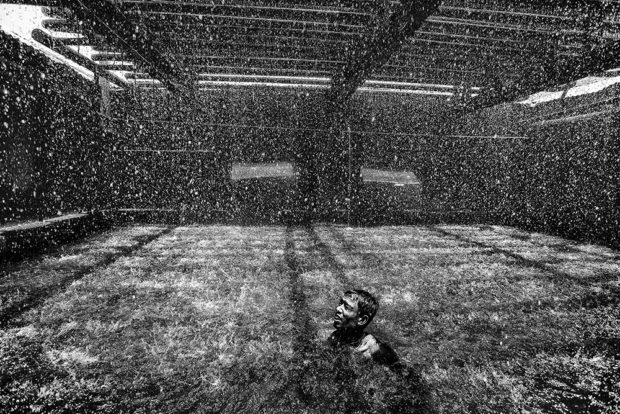 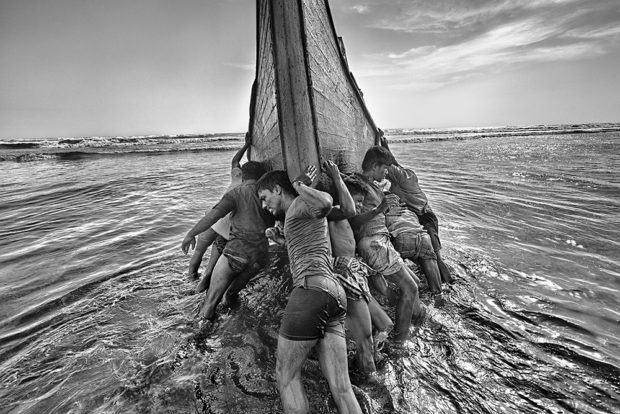 Many unregistered Rohingya refugees in Bangladesh work as fishermen in Cox’s Bazar. They have revolutionized the fishing industry. Years ago, when the industry was dependent solely on Bangladeshi fishermen, it was difficult to find people who were willing to go to sea year-round, due to the great risks involved. As the Rohingyas are so desperate for work, they have little option but to go to sea during the off-season, when conditions are rough and dangerous. Consequently, fishing in the seas off Bangladesh now happens almost all year round.