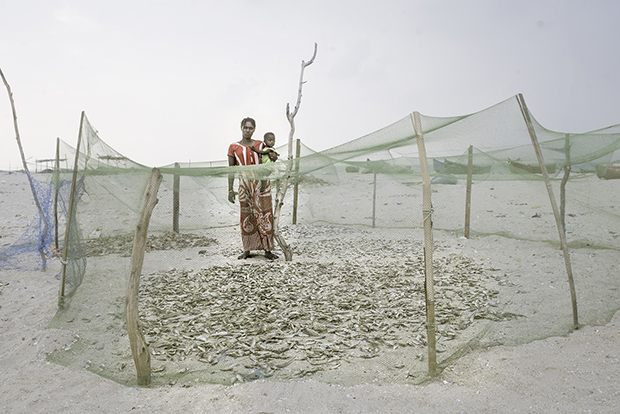 Japiyammal, 34, sells dry fish to make a living for her family. She also received a notice to vacate her home. After 50 years, the government suddenly seems to have woken up from its deep slumber and recognized the tourism potential in Dhanushkodi.

The fishing community here relies on traditional methods of reading the winds, stars and direction of waves. Without any formal training on modern techniques of fishing and unavailability of any GPS or Wireless devices, it is very hard for Japiyammal and other fishing community, to leave their land and learn the new ways of fishing elsewhere. 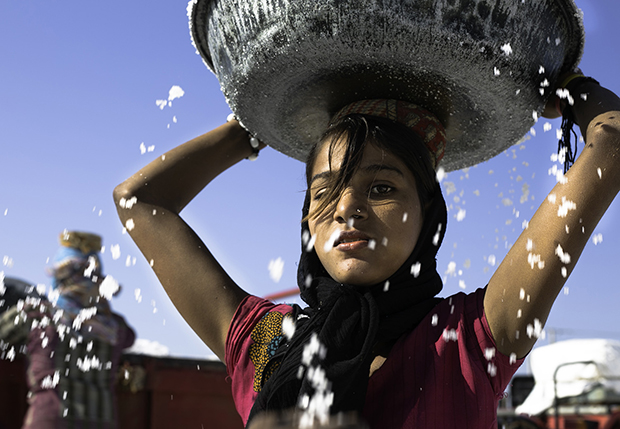 Initially, I thought Bharti, 13, was accompanying her parents to the fields since they did not want to leave her behind at home. But to my surprise, Bharti joined the work along with other adults on the salt plant. I saw her lifting the heavy pans full of salt, way too heavy for her thin arms. Her repeated movements of lifting salt and filling the tractors were fast but painful. It’s not just Bharti; there are scores of children waiting endlessly for an opportunity to lead a healthy life beyond these salt pans.

Deepti Asthana is a self-taught photographer living in Mumbai, India. She was born and raised in a north-Indian city called Bareilly in Uttar Pradesh, where she grew up in challenging circumstances. Asthana graduated with a degree in engineering from Tamil Nadu and spent some time working in Mumbai and Delhi; all this while she knew she wanted more out of life. In 2011 she was sent to London for a project from her organisation and met a landscape  photographer there. This meeting helped her discover a talent and passion for telling women’s stories through photography, which led Asthana to begin her project titled Women of India, in 2016. Her journey since then has brought the two Indias closer through her work and continues to shape her perspective of travelling alone through rural India.

Can you tell us about the Women of India project?
Women of India is a self-initiated personal project to cover the stories of women in rural India. While documenting stories of women across India, I saw the dichotomy of these two Indias. The contrast is astonishing. While baby girls are given away, sold, or even killed in parts of rural India, urban women are gradually seizing power and asking for their rights. While things are changing in bigger cities, rural India is still far behind, where discrimination against women is largely whitewashed using the label of ‘Indian culture’. When it comes to modernization of thought and freedom of choice and speech, there is little progress. Women of India is an attempt to bring out stories from rural India and provide a platform to the unheard voices. I share these stories of struggle, stories of win, stories of breaking the norm – the stories of common women who are largely neglected. 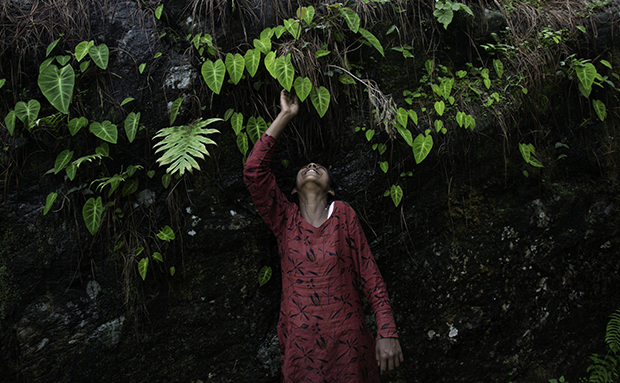 Manisha, 13, is from the same village of Chaukori. However, she belongs to a backwards community, and spends her day cooking, helping her mother in the fields, grazing cattle and collecting wood for fuel while coming back home.

Life as a backwards caste woman is especially difficult in the mountains. Sadly, these teenage girls are already treated like women; losing precious moments of childhood.  After spending time with her for long, I wanted to photograph the child in her who perhaps is more connected to nature and still retains her innocence.

What are the roles of photography and activism in this project, if any?
Well, I don’t see myself as an activist, but I do feel we need to talk about gender issues in rural India more extensively, which are largely different from issues across urban India and the western world. These are the women who need feminism the most, and they don’t even know what it is. Being a young woman from India, I feel I have a duty towards the future generations, so that their voices get heard and they receive equal education and the rights to grow, no matter whether they belong to a city or a village. Photography plays a great role in this project, as I believe in the power of images. Images touch us deep. Images have brought massive change; they have brought revolutions. And for me there is no better way to tell a story than through a powerful image. 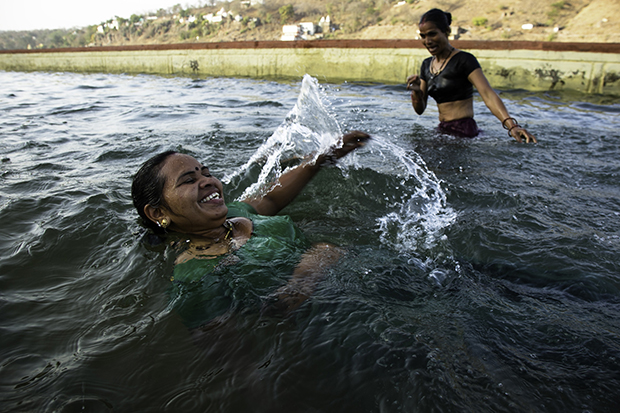 Women in rural India usually cover their faces with their sarees (the traditional long piece of clothing), a custom in many parts of India, following the conservative way of living. But it was exhilarating to witness a friendly swimming competition among these rural women in a ‘women-only’ section on the Ghats of the Narmada River, Madhya Pradesh. Nestled away from their everyday lives, they are oblivious to the outside world, for a few moments, and are seen flaunting their swimming skills amongst each other.

How does your experience of growing up as a woman in India affect your work?
Women’s lives in India, in general, are marred with deep vulnerabilities and uncertainties. I experienced this in my own life and through my mother’s struggles. After losing my father when I was four years old, I saw her single-handedly fight for the most basic rights and dignities to give her children a decent living. Standing next to her through her fight for our survival, I was constantly worried about our safety and in a way lost my childhood. My past only fuels me to do better work.

Small towns in rural India are entangled in a web of discrimination based on gender, caste and class. As a girl, growing up in one such small town, I struggled to both stand out as well as fit into the stereotypical moulds of Indian culture.

The urban world I inhabit now is, however, completely oblivious to the rural world of India. Though they intersect at several points, it is alarming, how little they interact; there is a need to connect these two worlds. I hope this project will help me bridge that gap. 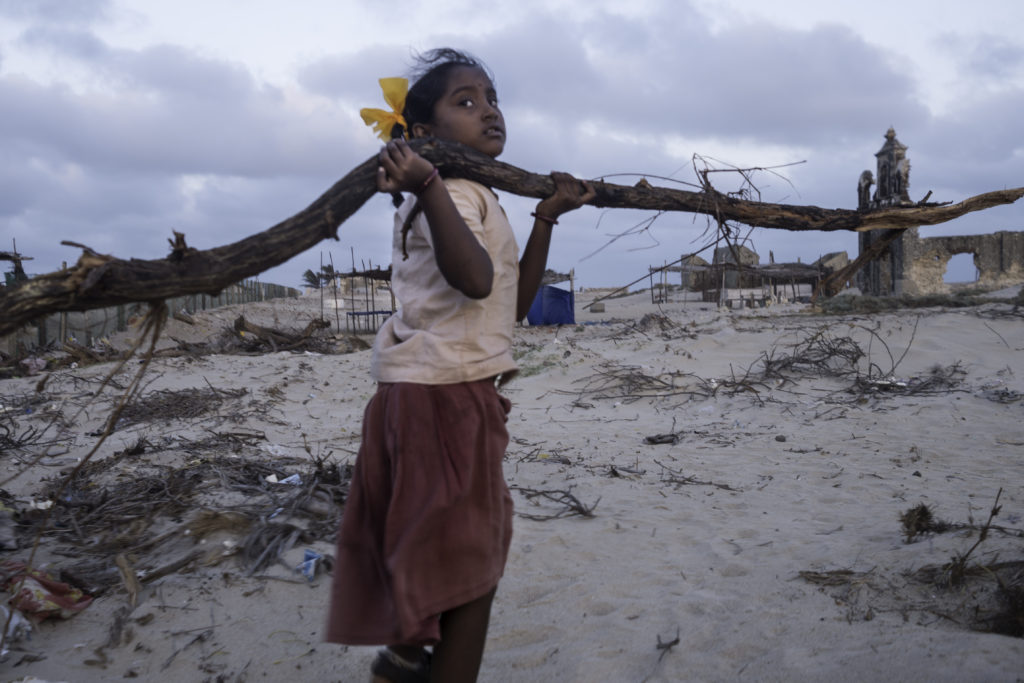 Nirmala has four younger sisters; unfortunately, her parents’ desire of having a boy never came true.

Her father realized he can’t feed five daughters and gave away daughters to different relatives. Nirmala stayed with her grandmother, and both of them rely on the income she makes running a small shop to sell seashells and toys. Her grandmother is weak, so Nirmala often helps her in setting up the shop and collects the wood to cook.

What are some of the challenges you face while working on this project?
Travelling alone as a woman in this country is a challenge, I have to constantly think about my own safety and security. Another challenge is the budget to sustain the project, most of my travels are self-funded and some of the stories require more time and multiple visits to a particular place. Despite all this, it is pure joy to pursue this project. 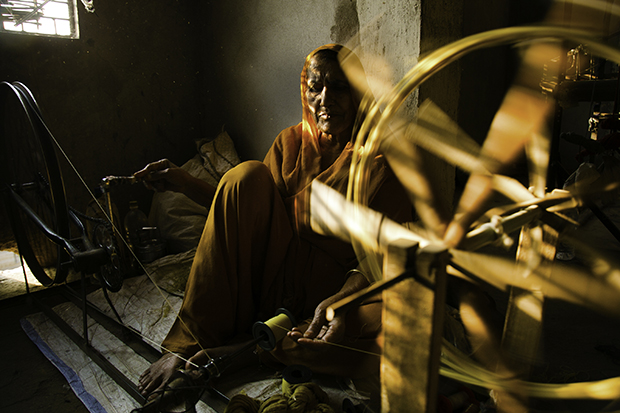 Shakila Husain, 75, weaves to make a living in Maheshwar, Madhya Pradesh. Her son pushed her out of her home and she now lives alone close to her workplace.

Belonging to a conservative Muslim society, it was difficult for her to step out of her home and work, but she refused to go to an old age home and is now the senior-most member of the ‘Women Weavers’ society. She encourages women from her community to educate their daughters and allow them to work so that they never have to depend on anyone.

What are your plans for this project?
I want to give these stories a platform – an outlet that recognizes the plight of these women and encourages the mainstream to identify with the fringes, which may hopefully lead to a change.

I also plan to take this project a step further, where I could find a way to make a tangible change in the lives of these women. I would want to involve more people with different skill sets who share the same vision and values towards bringing a change. 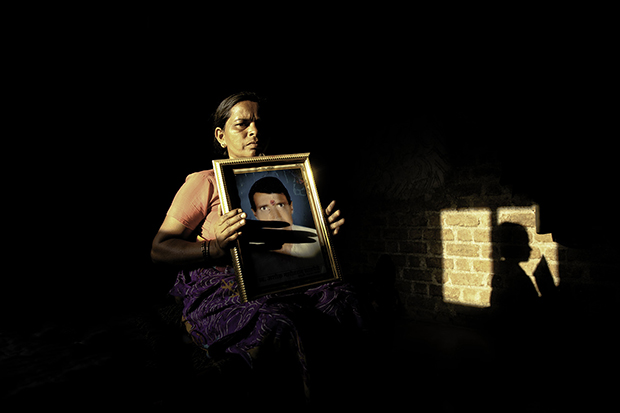 Sangeeta, 38, a widow, lives with her two sons, in Vidarbha, Maharashtra. Her younger son is a sickle cell anaemia patient and dropped out of school to support the family.

Once known for its cotton or ‘white gold’ production, Vidarbha is now notoriously known as the suicide belt of India. The region has been going through a severe drought for the last ten years leading to almost 8,000 farmer suicide cases. So when a crisis-hit farmer kills himself, these widows are pushed further into more debt and are forced to take jobs as labourers on others’ farms to sustain.

Is there any one experience that stands out for you during your work on this project?
I have met many inspiring women on my travels, and that was the seed for this project. One of those experiences allowed me to meet Savita Dharne, a farmer-widow in Vidarbha, Maharashtra. Savita’s husband, Jitender, hung himself from the roof of their home, where his wife Savita found him in the middle of the night. Savita is now left with the responsibility of her three daughters and the debt that her husband borrowed from private moneylenders and banks.

While the bread-earner of their family is no more, she pushed herself to take all sorts of jobs from working on the others’ farms as a labourer to ironing clothes for neighbours. I was surprised by the exceptional courage shown by her and I feel such stories should be told to inspire other women in similar situations. I spent multiple days with her and her three adorable daughters. Such experiences personally give me constant motivation to pursue this project.

Apart from this story, I feel that the way I have known India through this project and understood the human strength and vulnerabilities here, I probably wouldn’t have had this through any other means. 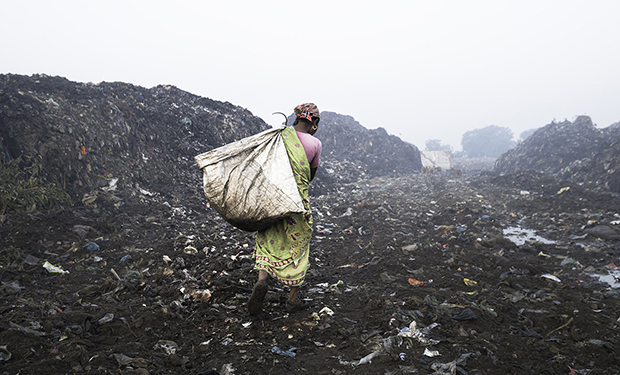 Bhagtanwala dump is situated on the outskirts of Amritsar, Punjab, and affects a major population and agriculture in its neighbourhood; villagers complain about the foul smell and diseases but to no avail.

Phulwanti, 32, is a seasonal immigrant from Madhya Pradesh and works in Bhagtanwala dump to earn a mere $2 per day. She keeps her work secret from her family back home, due to societal pressure. At Bhagtanwala, women and children alike collect garbage from early morning up till evening without any protection from the poisonous gases.