The Horrific Truth About Pigs in Factory Farms 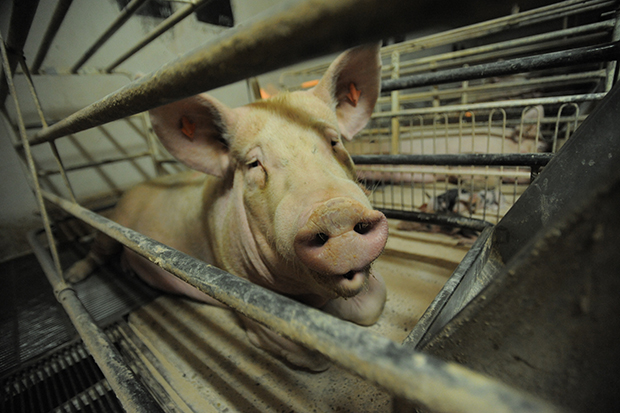 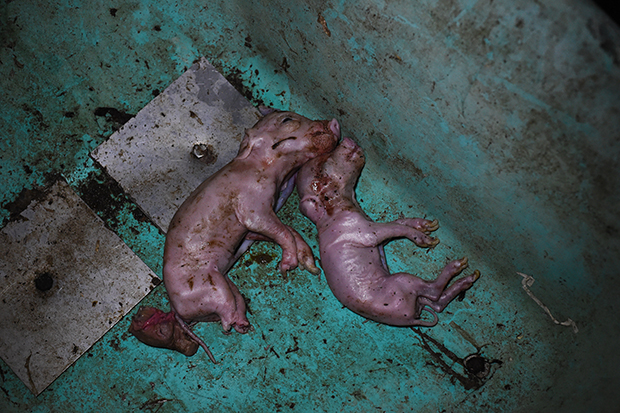 When the photojournalist Jo-Anne McArthur documents life inside a factory farm, she doesn’t touch a thing. She usually doesn’t have permission from the owners, and she enters at night with a security team. She has never broken anything, and she leaves the location exactly as she found it. She’s there to tell the truth, and that truth is worth running the risk of trespassing fines, and in some cases, bodily harm.

McArthur has devoted fifteen years to photographing animals living in painful circumstances. These are the animals we don’t see, who live inside farms, labs, and cages all over the world.

When she meets a pig in a factory farm, McArthur allows him or her to sniff her hand. She bends down to pig eye level so as not to frighten the animal. There’s a female pig in McArthur’s first book We Animals, photographed in Spain in 2009, and this particular pig has followed the photojournalist throughout the years. She is photographed at the top of this story.

“Pigs are insatiably curious,” McArthur tells me. Pigs are emotional, social, and intelligent creatures, and in factory farms, the photographer says the mental deprivation can be as acute as the physical harm.

That Spanish pig in We Animals was most likely used for breeding. A “breeder pig” is artificially inseminated twice or three times each year. When she gives birth to her piglets, she is unable to interact with them. She’s kept behind bars in a crate, where she cannot turn around and has trouble lying down.

“If they have a baby that’s strayed behind them and can’t find their way around back to mom, the mother can’t even reach over and pick up the baby,” McArthur says, “If there’s a dead baby, behind her or next to her, she can’t do anything but leave the body there. There’s nothing she can do.”

The pig in the book didn’t have a name, or if she did, McArthur never knew it. The title of that image is “The Pig I Hope Is Dead.” This title can be applied to countless animals in the same situation, including the piglets who grow up to live the same life their mothers did. It’s common for the pigs to develop respiratory problems due to the ammonia inside the farms.

“I wish death for them, knowing that that will likely be the only release they have from pain,” the photojournalist explains.

McArthur’s rule of not touching anything means, of course, that she’s unable to save the pigs. Walking out through that door is the most painful part of the work she does, and it’s the one that takes the highest emotional toll.

“I can’t help those pigs, but I’m trying to help future generations of pigs. I’m trying to show what goes on, so that we can make more compassionate choices, and so that there are no suffering pigs in the future,” she says finally, “And I have to be content that people are watching. People want to see these images.” As a result of seeing these images, we can then choose not to support the industry.

A pig’s curiosity, even in desperate circumstances, leads the animal to make eye contact with people as they pass.  In these pictures as in life, the pigs search against all hope for an impossible escape. “They’re asking questions,” McArthur tells me. “They have no answers. They don’t know what happens next. They know we— humans— are the ones who hold the key. We’re the ones who move them from crate to crate. We’re the ones who take away their young.”

These pigs, whether they’re living or dead, deserve at least to be seen.

The project relies on donations from the public. Make a one-time donation here, and if you’re interested in contributing monthly, you can do so here. Find the book We Animals here, and find McArthur’s new book, Captive, here. 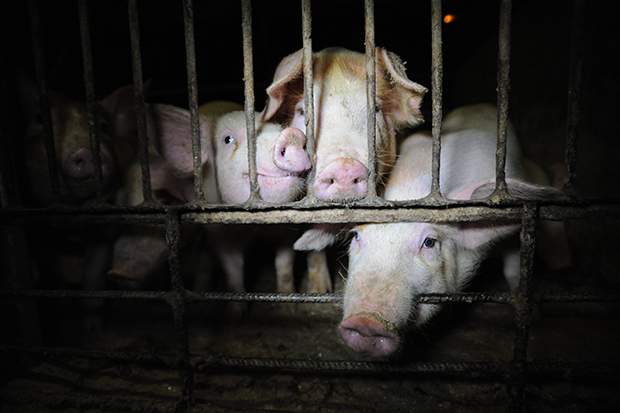 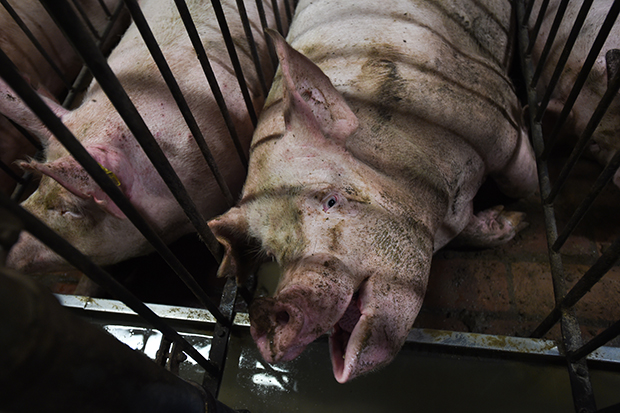 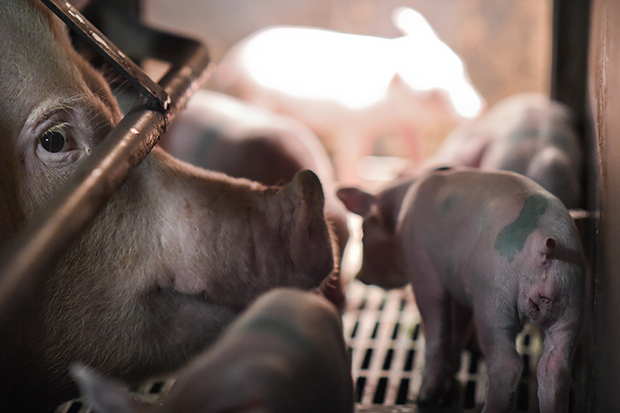 A sow catches a glimpse of her piglet while it stands close to her confined head. © Jo-Anne McArthur / Essere Animali 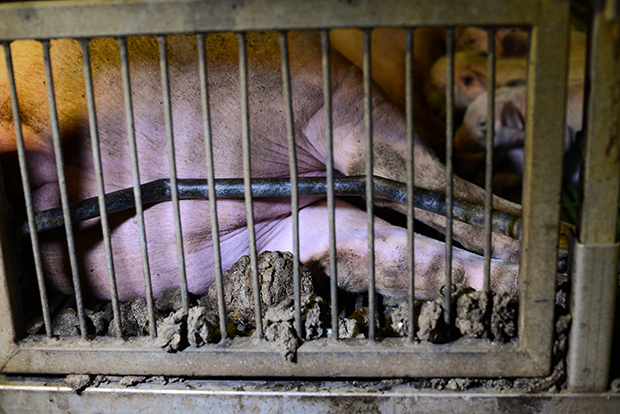 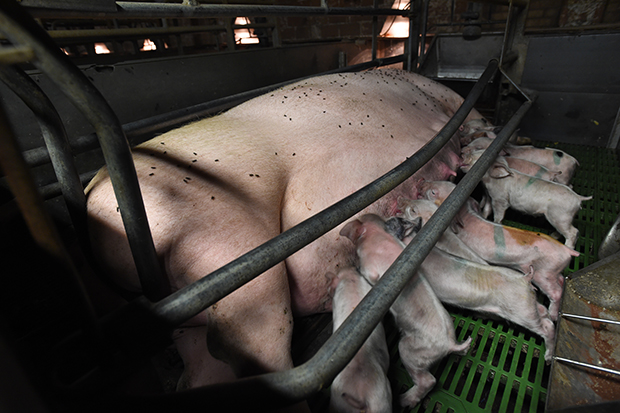 A mother pig nurses her piglets through the bars of a gestation crate. © Jo-Anne McArthur / Essere Animali 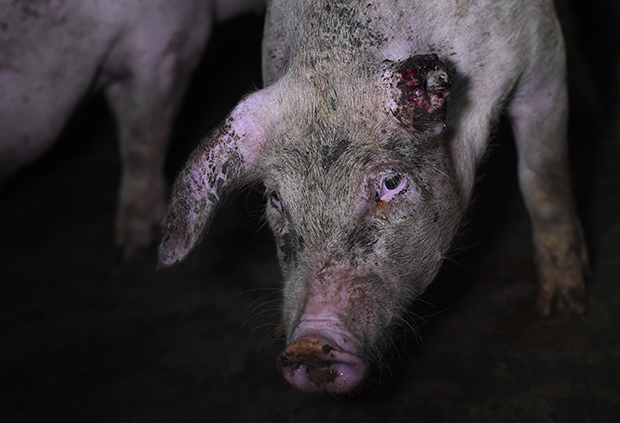 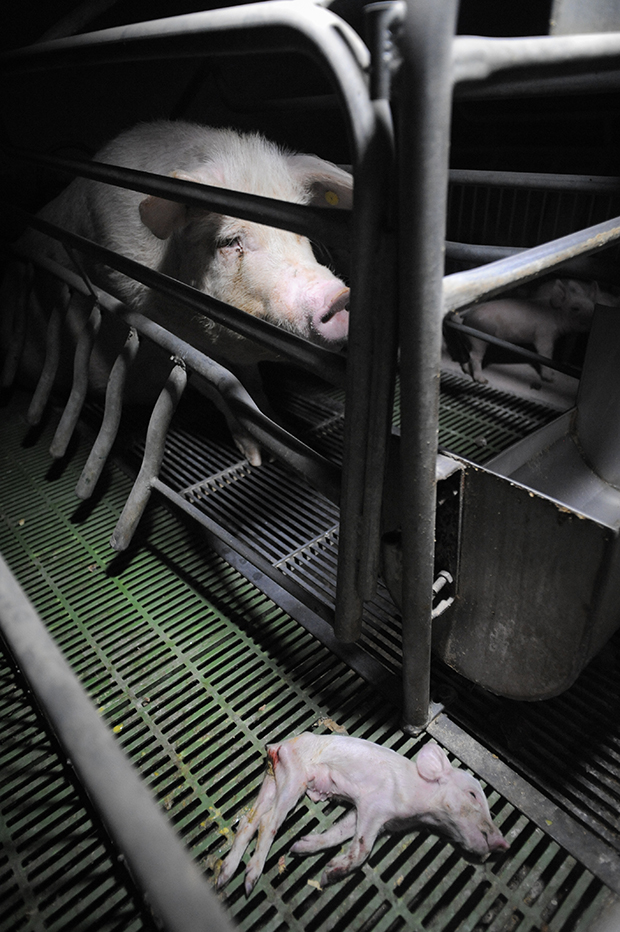 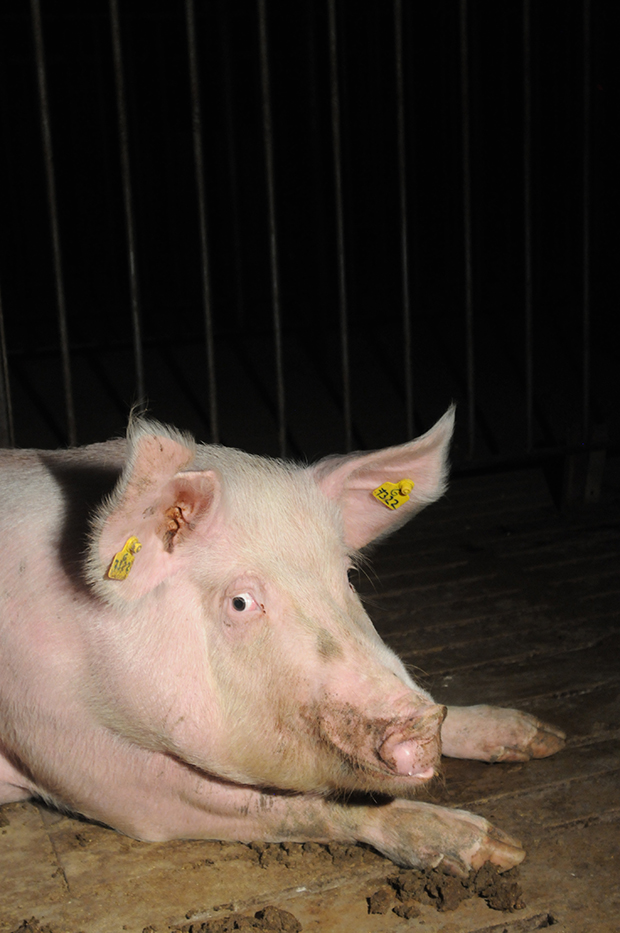 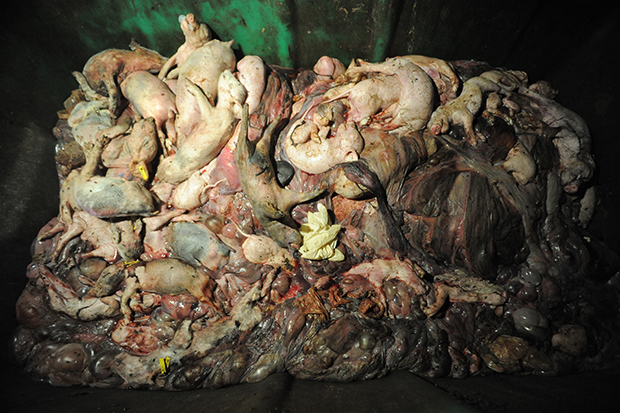