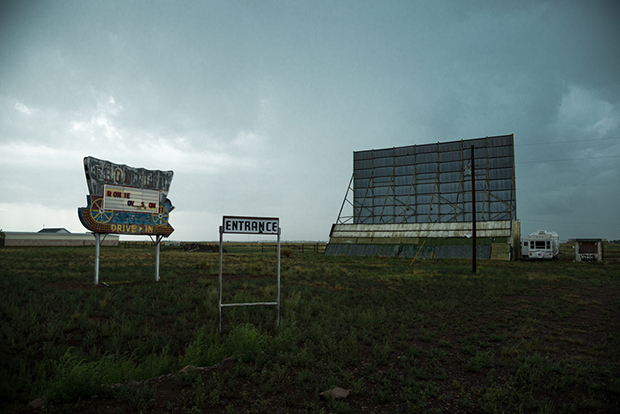 Frontier Drive-In, Center, Colorado. Abandoned
“The Frontier Drive-In was possibly my favorite location that in hindsight I wish I had given more time to. As we drove down this long highway surrounded by nothing, we were heading straight towards the biggest rain cloud I have ever seen. As soon as we had the theatre in our sights, the torrential rain started. My assistant and I sat in the car for nearly an hour, until finally we got a 10-minute break in the rain.” 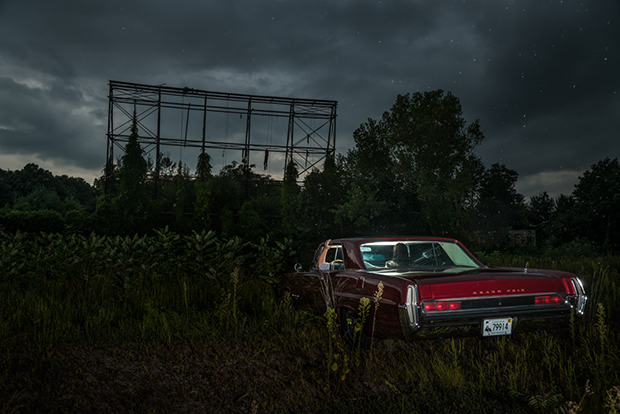 East Hartford Drive-In, South Windsor, Connecticut. Abandoned
“The shoot at East Hartford was very special because I got to create a photograph that had been in my head since the beginning of this project. I found a model who also had an amazing vintage car he was willing to drive back into the unmaintained lot. Of course it started to rain as soon as we arrived, so I had to work quickly, but we were able to create one of my favorite images from the trip.”

In the summer of 2014, Portland photographer Lindsey Rickert packed up her life and hit the road in search of drive-in movie theaters around the county. Some had been closed and deserted; others had adapted to a swiftly-changing market and were still in business. In total, she spent over two months in her car, traversing an estimated 12,022 miles across the United States.

The 1950s was the era of the road trip, and post-war families traveled the country in search of affordable motels and entertainments. Before the start of the decade, about one thousand drive-in theaters existed; by 1958, that number had quadrupled to nearly five thousand. When Rickert published Drive-In America in the fall of 2015, less than four hundred had survived.

The change, Rickert reports, is due in part to the shift from film to digital. Drive-in theaters typically operate only during the warmer months, and swapping out 35 mm film and projectors for update equipment is expensive. Few drive-ins, though much-beloved by their communities, have managed to hold on to what they once had.

Before I read a single word about the project, I knew Drive-In America was, at its core, about the artist’s childhood. The obsessions that guide us when we’re grown are always formed when we’re young, and Rickert left everything behind for sixty-five days to follow hers. In the book’s introduction, she writes of girlhood countless evenings spent playing with friends, munching popcorn, and drifting to sleep before the end of the second feature.

Drive-in theaters are nostalgic places, but Rickert never slips into the maudlin. She is, of course, saying goodbye not only to the abandoned sites but also to a piece of  her own history. But the presence of the operational theaters complicates the story. This isn’t a memorial; it’s an expression of faith. In the end, Rickert believes in drive-ins, and for that reason, she is able to turn back the clock on her own life, remembering what it means to be a little kid in front of a big screen. 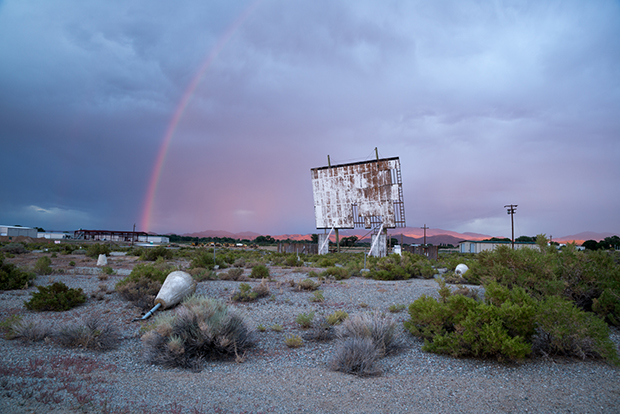 Sage Crest Drive-In, Yerington, Nevada. Abandoned
“With little information about actual dates, it is estimated that this theatre opened sometime in the early 1950s and was closed by the 1980s. Sage Crest Drive-In was the first official theatre of my trip. With rain starting as we pulled up, our chances of getting some good shots were looking slim. Luckily, before we gave up, the rain stopped and a beautiful rainbow appeared right over the dilapi- dated screen.” 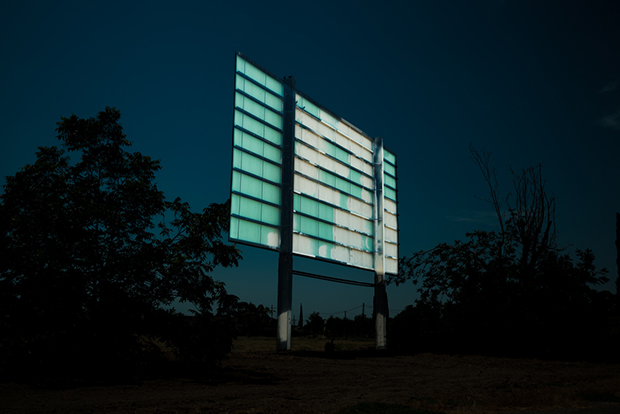 Porterville Drive-In, Porterville, California. Abandoned
“Opening in 1950 and adding a second screen in 1990, it appeared the Porterville Drive-In had survived the vast theatre closings of the 80s and 90s. Sadly, in 2004 they went dark. When we visited, both screens were standing, along with the amazingly patriotic ticket booth, and an eerie burnt shell of the concessions and the projector room. While exploring, we stumbled upon artifacts left behind in the 1980s: shoes, bottles of mustard, and old t-shirts.” 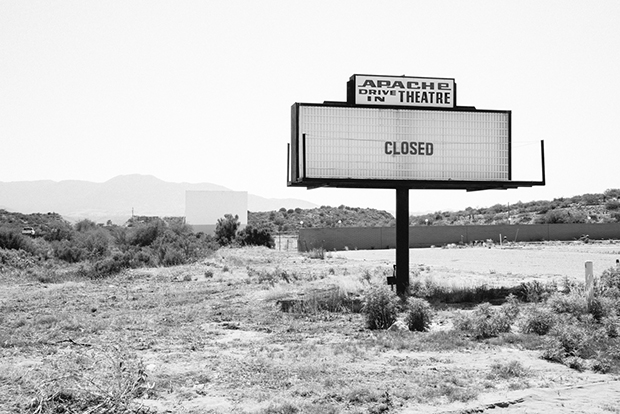 Apache Drive-In, Globe, Arizona. Abandoned
“Opening in 1954, the Apache’s original wooden screen was destroyed by a fire in 1972, forcing them to close and reopen in another location in 1974. The tragic tale of this theatre was that it was on my list of operational theatres to visit; however, they went dark eight months before I could make it, due largely to the high cost of updating to a digital projector. Pulling up to see everything mostly intact was heartbreaking.” 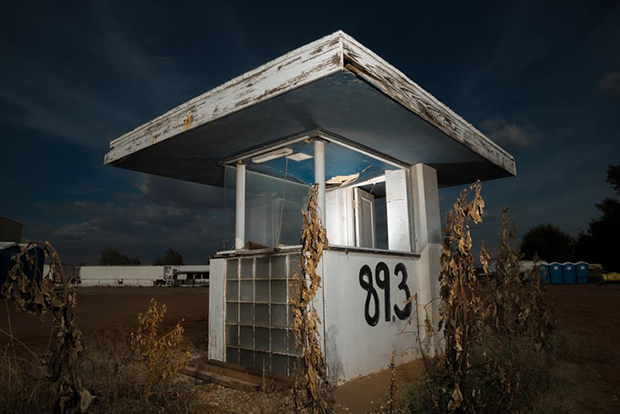 Star-Vue Drive-In, Anthony, Kansas. Abandoned
“Opening in 1950 and closing in 2003, the Star-Vue now houses a construction company. Luckily the structures still remain, including the dilapidated playground. This gem came at the perfect time; we has spent the previous night driving hours further than anticipated to avoid getting a room at a motel that looked like the inspiration for Psycho. We ended up in a motel across from a feedlot with a giant sign that said ‘Eat Beef, Stay Thin.'” 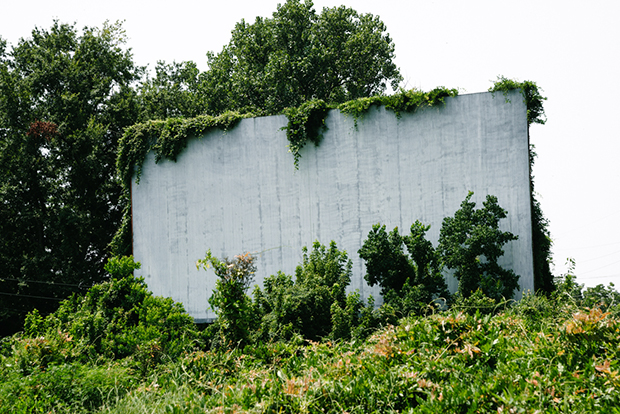 Showtown Twin Drive-In, Monroe, Louisiana. Abandoned
“I was drawn to this location after seeing a photo of the screen that had nearly been taken back by nature and the trees that surrounded it. It reminded me a lot of the first abandoned drive-in that I ever saw when I was a kid growing up in Iowa. I remembered driving by an abandoned screen pushed back into the tree line and always thinking, ‘That is such an odd place to put a billboard.'” 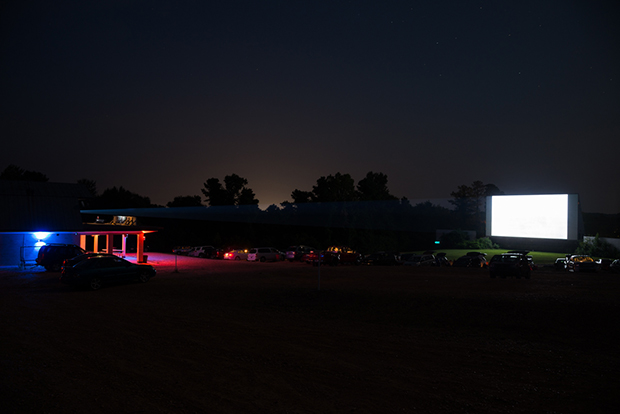 Blue Moon Drive-In, Guin, Alabama. Operational
“One of the best things about my trip was getting to meet all the drive-in owners. Chris, the current owner of Blue Moon, was a wonderful host. He took me in and showed me their new digital projector and explained all the ins and outs of digital versus analog. I also got insight into how different it is to own a drive-in theatre in the South where the season extends much longer, sometimes only closing for two weeks a year.” 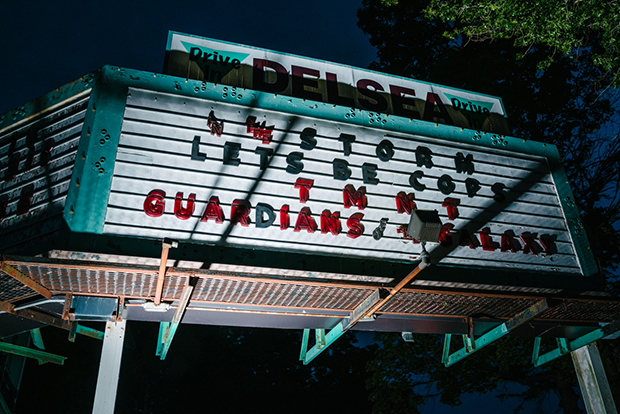 Delsea Drive-In, Vineland, New Jersey. Operational
“Built in 1947, the Delsea went dark in 1987 and stayed that way until 2004 when they reopened. The Delsea was like nothing I had ever seen before: a well-oiled machine accommodating the giant line of cars waiting to get in. If anyone ever asks if drive-in theatres still exist, the Delsea will show you that they do and they are thriving.” 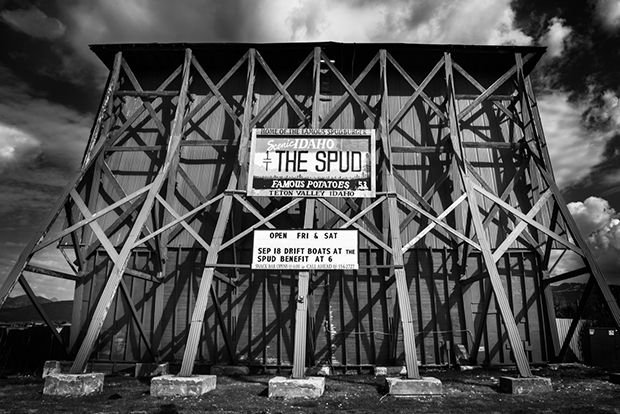 The Spud Drive-In, Driggs, Idaho. Operational
“Opening in 1953, The Spud was the last stop on a very long adventure. This drive-in has major kitsch factor, from the giant concrete potato on a flatbed truck sitting out front to the two smaller potatoes by the ticket booth. The beautiful wooden screen was something I hadn’t seen anywhere else. Had I not been so close to home, I would have stuck around for the week- end and enjoyed a movie.”