Martin the Talking Dog Will Make You Laugh and Cry 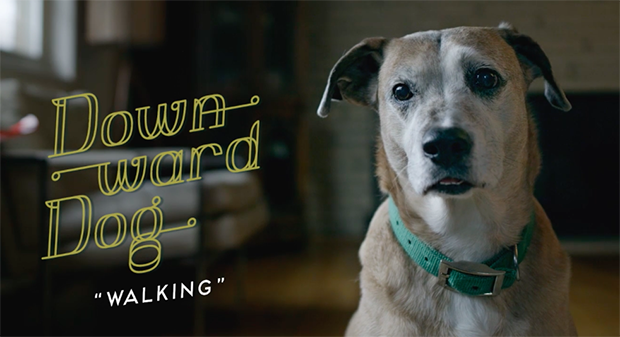 People might take things for granted, but dogs don’t. At least that’s how director Michael Killen sees it. Downward Dog is the story of a dog named Martin and his person, a young woman named Nan.

Originally created as a web series by Animal, Inc., Downward Dog is coming to ABC this spring.

Killen is an expert when it comes to talking animals— he’s one of the minds behind the Taco Bell Chihuahua and the California cheese campaign. Most talking dog characters are for children; Martin is for everyone.

The role is voiced by Samm Hodges and played by Sadie, the dog of Killen’s brother-in-law. She was chosen for her expressive face; “her eyes tell the story,” the director says. Sadie actually had a cancer scare when they were making Downward Dog, and that became part of Martin’s story too.

Martin is a profoundly thoughtful dog. He even has a therapist. “We’ve found working with this subject matter for so long now that a dog can say some pretty amazing and selfish things that would feel shallow coming from a human,” Killen tells us. And while the conceit is hilarious, it’s also quite touching, especially as we see Martin age and mature.

Downward Dog follows Martin and Nan through the repetitive rhythms familiar to anyone who has ever had an animal— the walks, the meals, the naps. Martin’s story, like most dogs stories, is composed of mundane moments, but he makes them special. In the end, all he cares about is his bond with Nan.

Sadly, Sadie passed away before she could see her show hit the big-time. But the people behind Downward Dog rescued the current actor behind Martin after he had been waiting in an animal shelter for a year.

“I think when we see some of the things that we feel as modern day humans through the eyes of an animal that just wants love, trust and food, we look petty and silly,” Killen says, “We forget that deep down we’re animals also looking for the same things.”

Watch Downward Dog on ABC starting May 27th, 2017. You can find the trailer here.