The Couple Who Found A Shared Love For Tornado Chasing 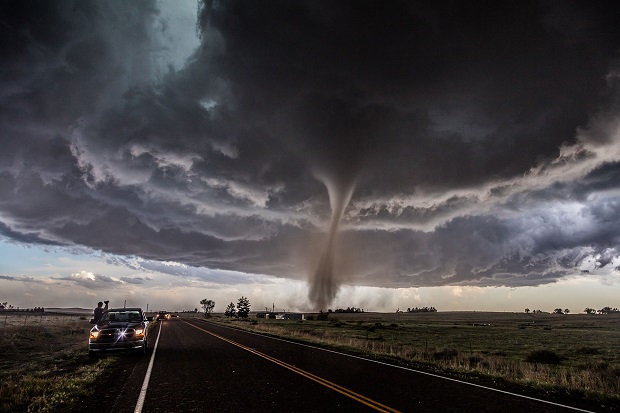 07 May 2016: A classic severe weather set-up in the high plains of Colorado near the town of Wray, which yielded one of the most photogenic tornadoes of the year. We were just ahead of the storm as the tornado started and tracked with it as it grew from a fine funnel to a sizeable cone tornado. At this moment, the twister was at its most photogenic while its parent supercell continued to be manageable. We were among a number of people, including those you see in the shot, nervously enjoying the epic display nature put on for us. 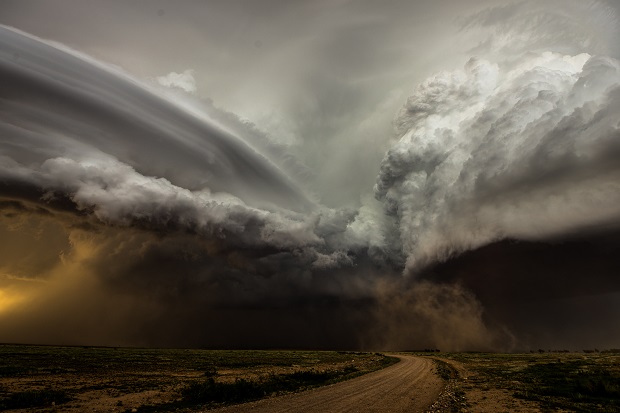 07 June 2014: A clash between two storm cells in New Mexico, US in June 2014, each with its own rotating updraft. It appeared as though one updraft was anticyclonic, resulting in a very turbulent scene. The curved striations of the oldest noticeable against the new bubbling convection of the newer. It was a fantastic sight to watch and it’s the rarity of such scenes that keep drawing us back to the US Plains each year.

The Irish philosopher Edmund Burke wrote in 1757:”The passion caused by the great and sublime in nature… is Astonishment; and astonishment is that state of the soul, in which all its motions are suspended, with some degree of horror.”  Referring to the aesthetic concept of the sublime, Burke explains how fear – especially the fear of God – can be evoked by the power of nature, and it is exactly this mixture of awe and fear we feel when looking at these apocalyptic images by British couple Cammie Czuchnicki and Tim Moxon, aka Weather Studios. Each spring for the last seven years, the couple made the trip to the US to follow the tornado season north – from Texas to the Dakotas – to photograph the spectacular weather. In their photos, the storms are shown raging across the land, rolling in like mega-tsunamis, making it hard not to focus on our vulnerability as humans.

How did you first get into tornado chasing and what attracted you to it?
“As a kid I was always scared of storms, but as I got older this fear developed into a fascination of severe weather. Unfortunately in the south of England, where we live, severe storms are few and far between so I knew I’d have to travel to somewhere like the United States if I was ever going to carry out my life-long dream of photographing a tornado chasing me! In 2010, I met my partner Tim and we decided to embark on this adventure together and have never looked back. This year will be our 8th year out on The Plains.” 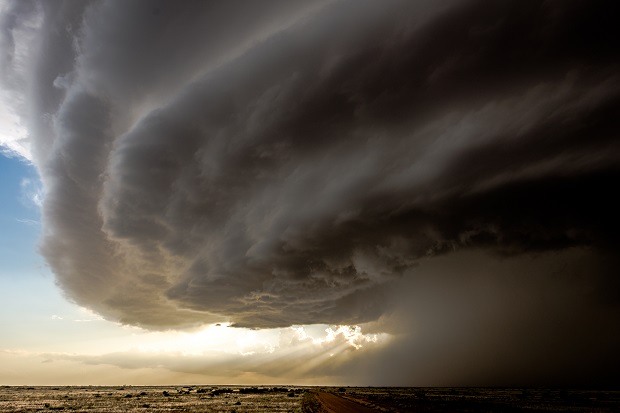 07 June 2014: An impressive mothership storm, whose structure was some of the best we’ve ever seen, just outside Roswell, New Mexico. 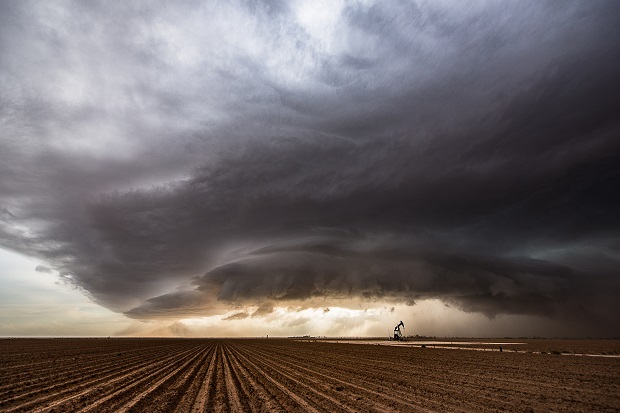 31 May 2016: Some great structure and a lot of blowing dust from a Texas storm. The backdrop of the oil donkeys just added to the apocalyptic feeling in the area.

Where are the photographs taken? How do you find out about the storms and locate them?
“Most of the photographs are taken in ‘Tornado Alley’, a colloquial term that refers to the belt of the central US where tornadoes are most frequent. This area is huge and covers many states from Texas up to the Canadian border and from Colorado east towards The Great Lakes. We study output from weather models from a few days out to help us decide where to head. Shorter range output, satellite feeds and live radar updates helps us refine our position nearer the time. However, using your eyes and reading the skies is key to both safety and forecasting in the heat of the moment.”
Can you describe what your first storm chasing experience was like?
“No matter how many books we’d read, videos we’d watched or forums we’d visited to glean info, nothing prepared us for the impact of witnessing our first supercell (rotating storm). We were on the outskirts of a small town in Nebraska and looked west to see the entire skyline darken with the approach of the sculptured twisting storm. The scale of the storm, strength of the wind and the speed in which it approached nearly caught us off guard as we struggled to get the car doors shut and escape to safety. We got some great photos though – and our new addiction had started!”

How do you stay safe during the storms? Have you ever been in a difficult situation?
“Having our GPS location integrated within our radar feed, allows us to always be aware of our position in relation to the storm, and new storms that might be out of sight to us. We will always have two escape routes planned before even attempting to get out and take any photos. However, safely positioning ourselves to take photos is often a challenge. Apart from the tornadoes themselves, setting up shots in an area safe from lightning and giant hailstones needs good awareness of exactly what is happening at each moment in the life of the storm.There have been many moments over the last 7 years where our judgement could have been better. Much of this is in relation to anticipating the storm’s speed or movement. Sometimes we may end up with roads we needed to take being blocked, signalling the end of the chase, and other times where we have needed to drive through particularly dangerous parts of the storm with zero visibility. However, each time we try to understand where we’ve gone wrong and hope to not make the same mistake again.” 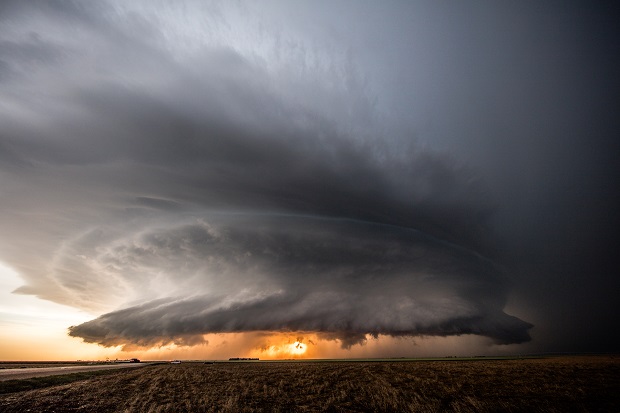 21 May 2016: Another take on the sunset at Leoti. As the sun set slowly behind the middle of the storm’s base we were treated to some incredible sights, though the inflow of the storm meant it wasn’t always easy to keep either the cameras or ourselves steady! 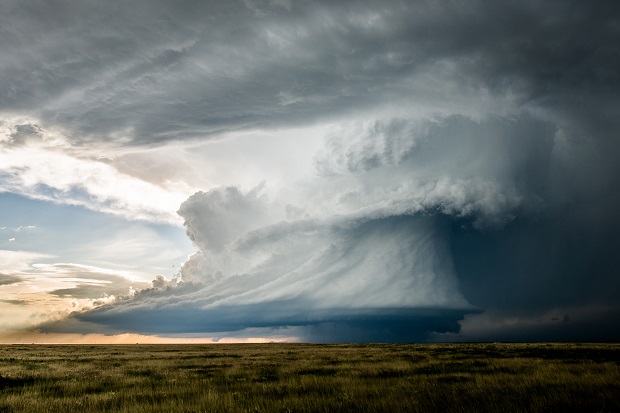 04 June 2015: Even in its latter stages, the Simla, Colorado, supercell was still showing amazing structure. 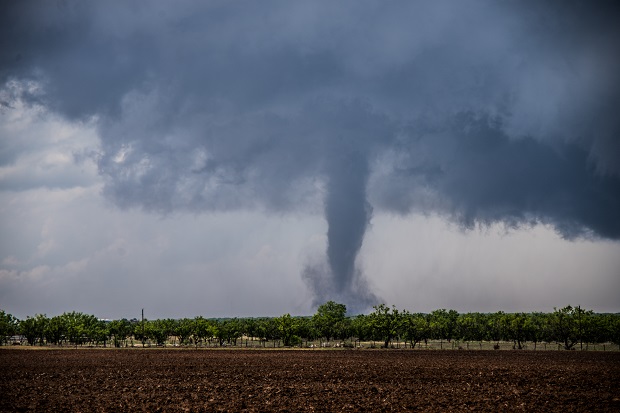 05 May 2015: The tornado that formed from a low precipitation supercell near Big Spring, Texas. We were positioned on the perfect road to watch as the tornado lift ed and reformed numerous times over a 10-minute period, with only some damage to a barn reported. 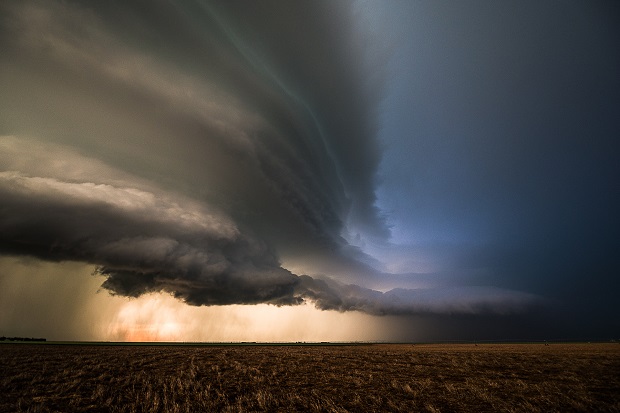 21 May 2016: Another shot of the awesome Leoti, Kansas storm backlit by lightning. The structure continuously changed and at this point, the colours at dusk made the scene even more spectacular. 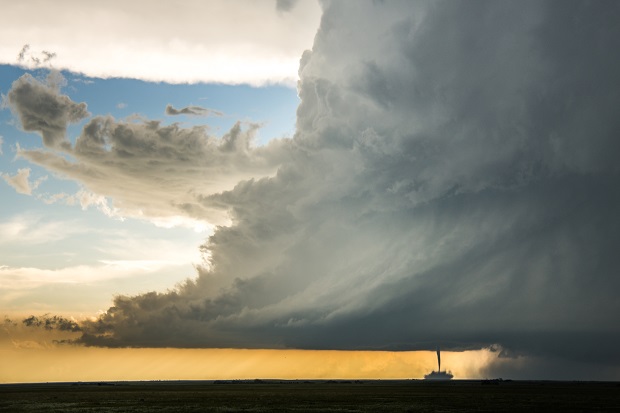 04 June 2015: This shot of the incredible rotating updraft and anticyclonic satellite tornado from the powerful Simla, Colorado supercell invokes a sense of quiet awe for just how impressive and beautiful Mother Nature can be.