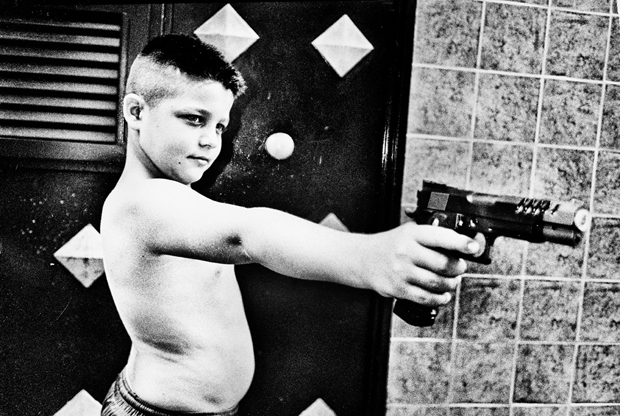 This young kid from the Spanish Quarter in Naples plays with a replica gun firing plastic bullets in one of the small alleys of the neighborhood. His gestures are mostly inspired by the successful TV series “Gomorra,” taken from the best-seller book. Stories of criminals and mafia gangs in Naples are the cornerstone of each episode. Since many non-professional actors, casted from the streets, are featured in this TV series, kids are very much attracted by the opportunity of becoming stars of the small screen. For that reason, they start to carry themselves like real gangsters. Real-life criminals are also seen by kids as successful and generous people who managed to escape from the poorest communities of the city. 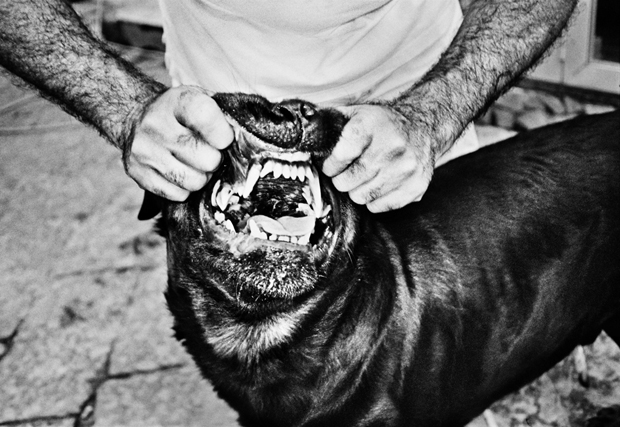 Paco is a rottweiler, the “mascot” of a gang based the Spanish Quarters in Naples. This group of men ranges from the slacker to the wheeler-dealer, involved in all types of traffic. They usually hang in the street, smoking or eating, always patrolling the area with an expert gaze. They all are very kind and welcoming with strangers. They can afford a very relaxed attitude, being high-ranking among the gangster entourage. The owner of the dog is nicknamed Al Pacino as a tribute to the movie “Scarface”.

Rome-based photographer duo Jean-Marc Caimi and Valentina Piccinni’s latest project, Forcella, came about after they first met four years ago. Caimi was working on his first book Daily Bread and asked Piccinni – who was then working as an art curator – to edit down the mass-accumulation of negatives from the project. “We soon found that our ideas and photographic approaches could be entwined,” says the pair, “and eventually decided to start a series of projects together.”

Both shared a deep passion for Naples and their attention turned to Forcella, one of the city’s oldest districts, when they discovered a friend was living there. For the two photographers, it was a place which carried an “irresistible attraction”. Forcella is not only one of the oldest districts but also “one of the most violent areas of the city, where many mafia-related crimes have been perpetrated,” they explain. “It is a place where people follow unwritten laws, behaviours, and traditions… It maintains a timeless identity, frozen in an undefined era… There’s no similar place in Italy or on earth.”

Although they consider themselves documentary photographers, Caimi and Piccinni admit they have a very intimate and personal approach to their stories. After deciding they wanted to do a project on Forcella, the pair rented a small flat in the neighbourhood and began acquainting themselves with the ‘rhythm’, the ‘communication codes’ and the ‘custom’. As they befriended locals, they found doors opening up to them, allowing them privileged glimpses into people’s private lives. “We were soaked in this human primordial soup,” they describe, “contradictory, dangerous, strong, beautiful, and repulsive at the same time.”

The pair found that one open door led to another, and soon they were being introduced to other people and other neighbourhoods, which bore similarities to Forcella, like the Quartieri Spagnoli and Sanità. It was only after these boundaries between foreigner and local had broken down, that they began to capture the truly intimate moments.

For the project, the duo used point-and-shoot cameras to keep as discreet and as personal as possible. “We often use point-and-shoot cameras,” they explain. “In Forcella, we needed unobtrusive gear to be able naturally approach people, and avoid drawing attention to ourselves as photographers. Point-and-shoot cameras give you the opportunity to shoot very naturally, without stopping a conversation or interrupting an emotional interaction and its climax.” Big and showy equipment are what they call ‘momentum-breakers’. Setting up a small darkroom in the toilet of their Forcella flat, the pair would shoot all day, and return to develop their film at night-time.

With the sense of candour and spontaneity achieved through their point-and-shoot cameras, the photographers take us into the heart of the Neapolitan underground and reveal through disorientating viewpoints and fragments of vision – a spiral staircase, a woman’s tattooed arm, a tiger braced behind bars, the naked torso of a woman emerging from a sequined skirt – these people’s intimate lives: Welcome to Forcella. 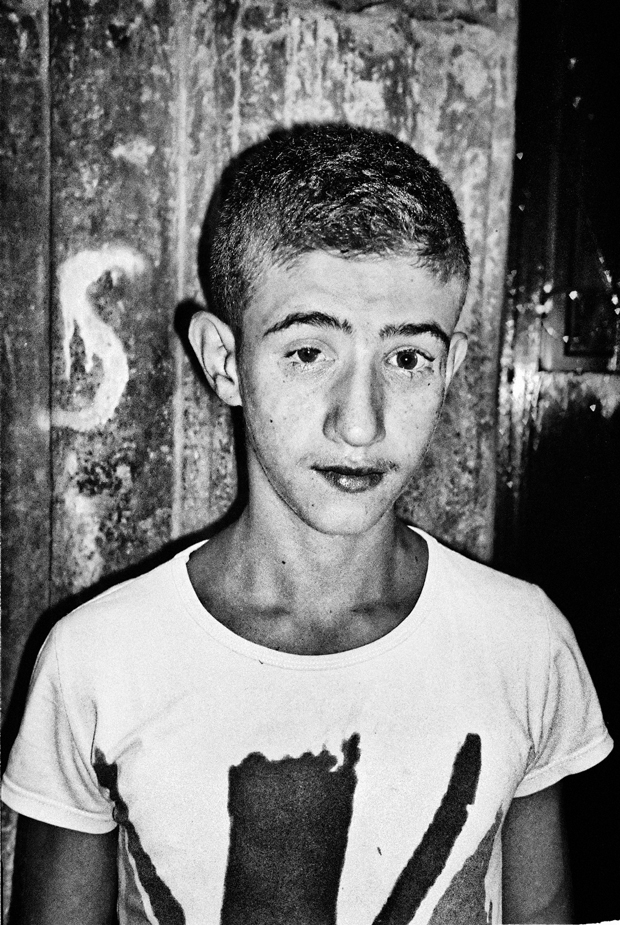 A young kid outside his home in Forcella. He lives in a “basso,” a very small flat with direct access to the street. These places are often overcrowded, with more than one family living together. In the last ten years, many of these places have been rented by migrants living and working in Naples. 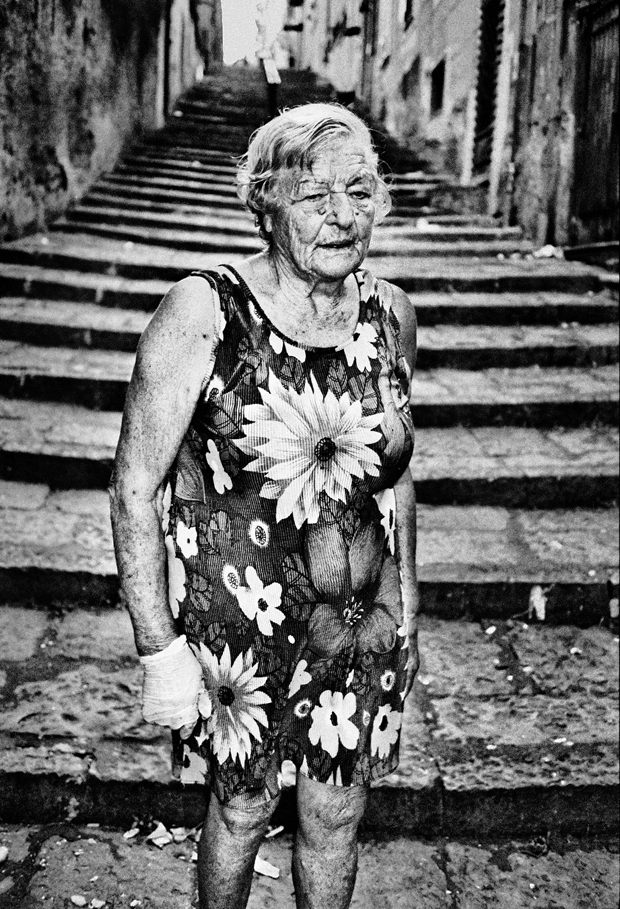 Most of the inhabitants of the poorest and old  areas of Naples are not leaving the city for the summer due to financial problems. During the day, they occasionally move to the city beach, and at dusk they return home in Forcella, Sanità and Quartieri Spagnoli. 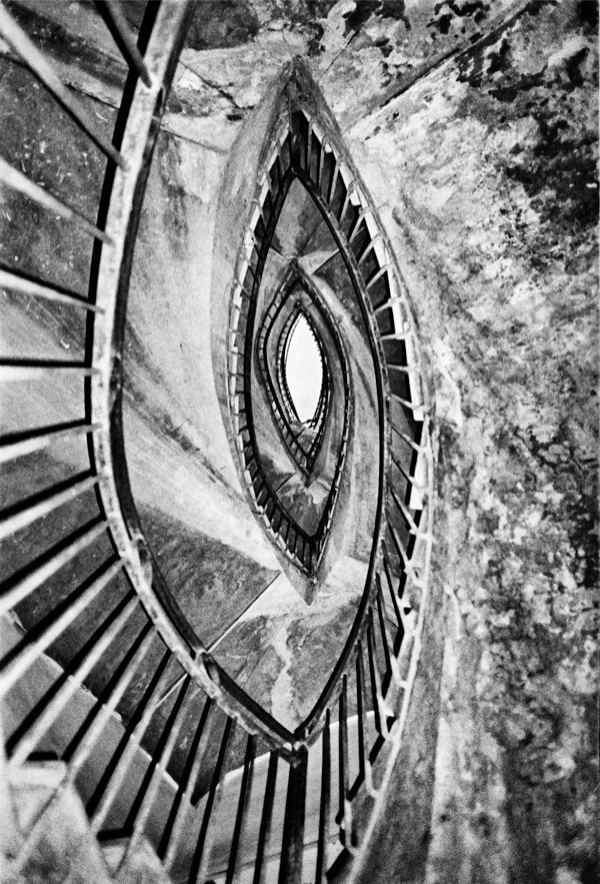 Rione Sanità, “Health Alley” in Italian,  is a neighbourhood in Naples- part of the Stella quarter. It is located north of Naples’s historical centre, adjacent to the Capodimonte hill. While the settlement in Rione Sanità was originally established as a home for noble and rich families of Naples’s aristocracy, the area eventually turned into one of the most infamous and degraded of Naples. Unemployment, poverty, and the widespread presence of Camorra have long characterized the quarter. 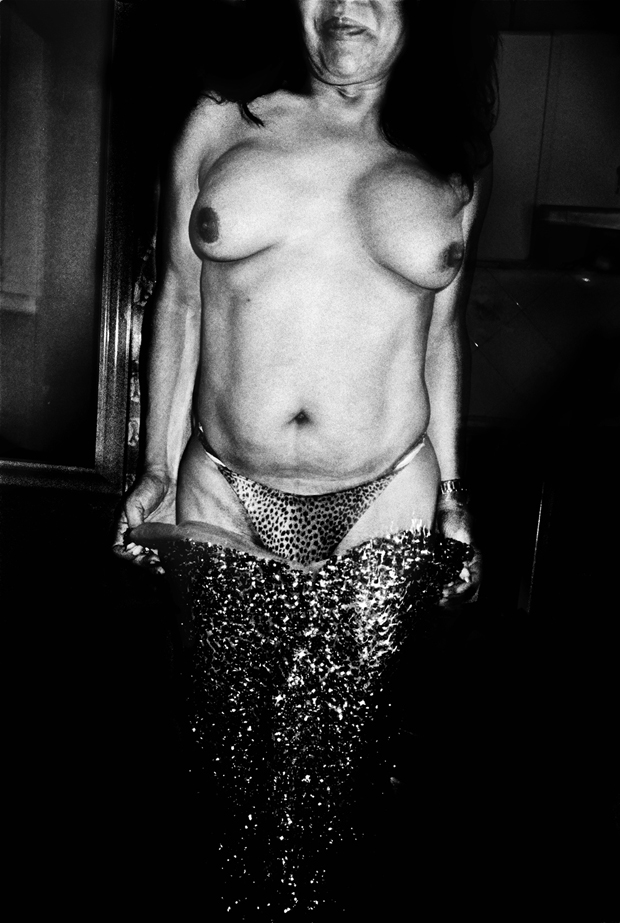 Sara is a transsexual from Skopje, Macedonia. She is 50 years old. She lives in Forcella. She has spent all her money, earned from working as a prostitute,  in order to build a luxury home in her country. In Naples, she lives in a studio apartment on the ground floor. 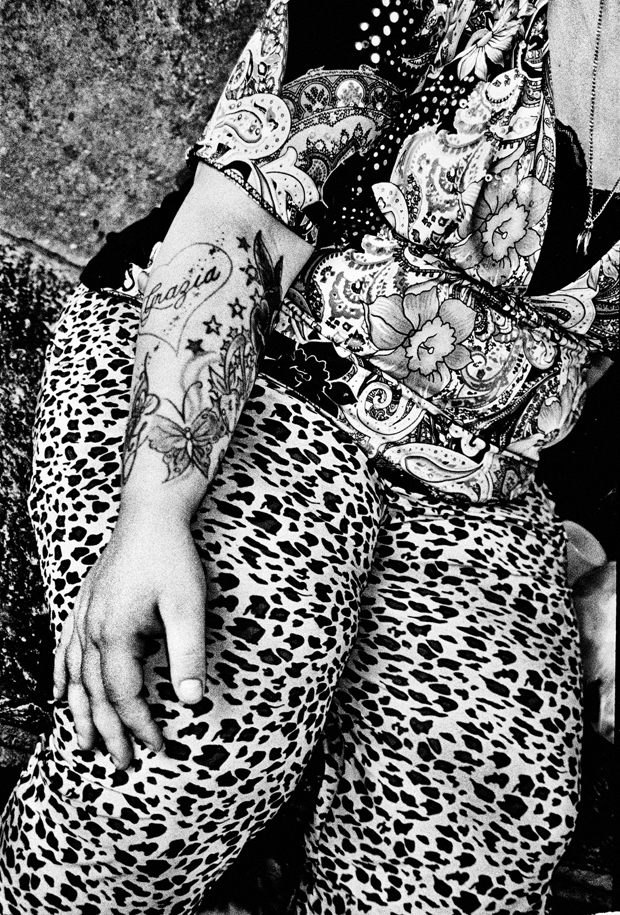 Street fashion tendencies in Naples are a mixture of scattered inputs, from television or magazines, a unique taste for the vintage Eighties look, the limited cash availability, the easy access to the cheap Chinese goods. 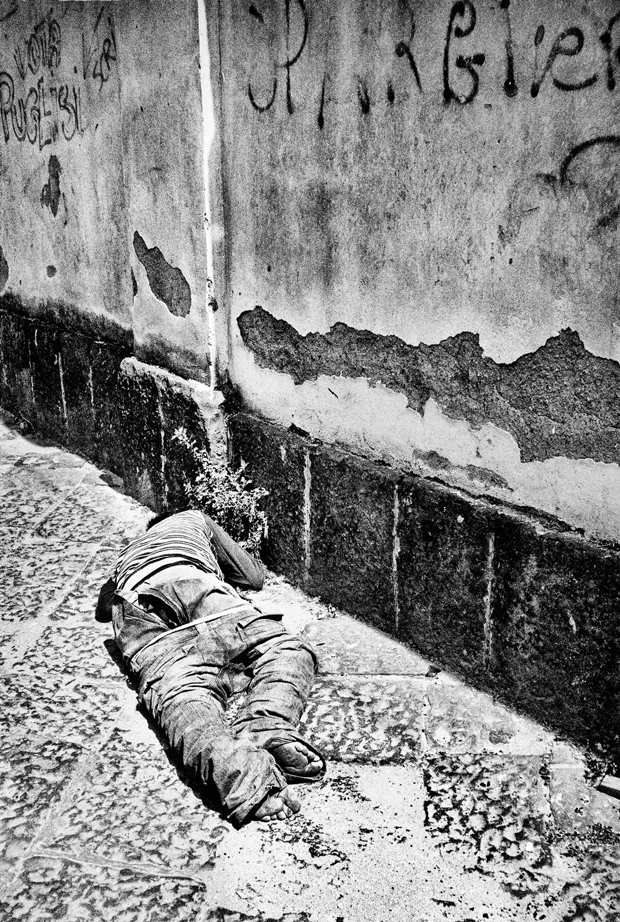 This man fell asleep in an alley just beside the Ascalesi hospital in Forcella. He is a “serial drinker” well known by doctors at the hospital, who recently refuse to visit him because they cannot envisage any therapy. Poverty is a great issue in Naples and the South of Italy in general. Recent figures revealed by the The National Institute for Statistics show that 25% of the families in the area of Naples live in a destitution status. One family in four is poor. 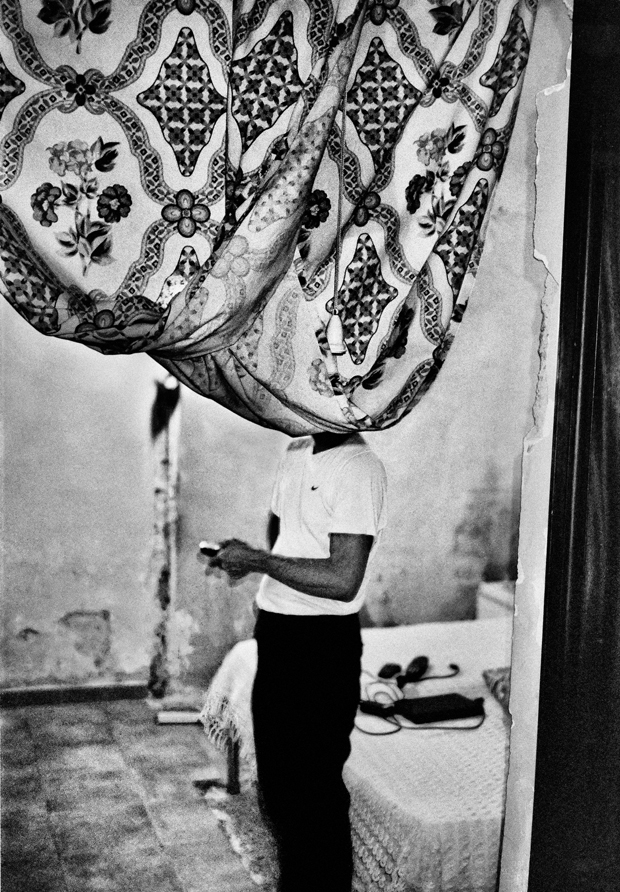 Poverty is a great issue for Naples and the South of Italy in general. Recent figures revealed by the The National Institute for Statistics, show that 25% of the families in the area of Naples live in a destitution status. One family in four is poor. 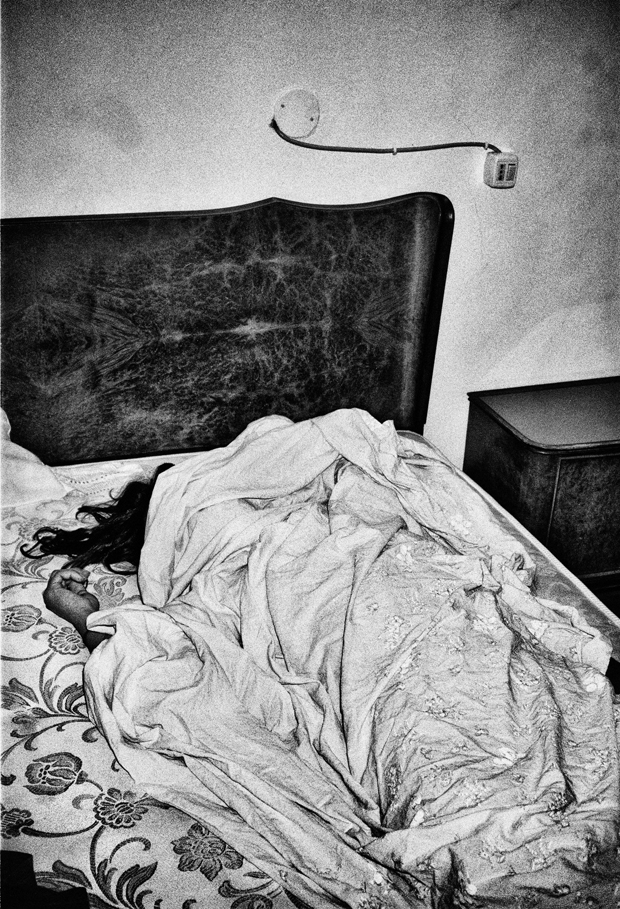 ‘O Vascio or “basso” in Naples refers to the small houses of one or two rooms with direct access to the street and the small and scarcely lit alleys in the central area. In Naples there are approximately 40.000 “bassi.” These places are often synonymous with precarious living conditions and poverty. 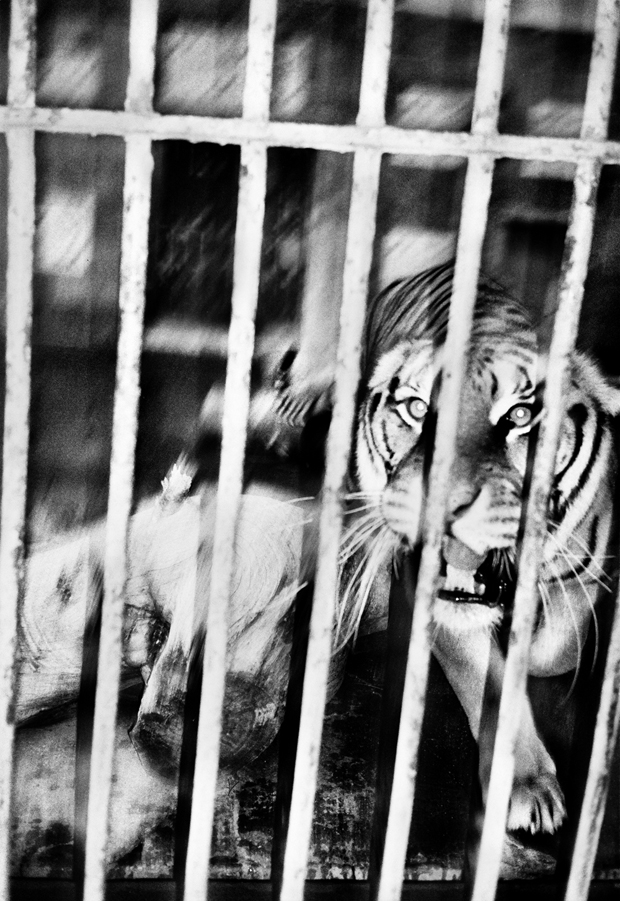 The Naples zoo was founded in 1940, but it was opened to the public only in 1949. One of the first Italian zoos to be open, it was considered in the second half of the 1900s to be an ideal place in Europe for scientific research. In the eighties, it began a difficult phase in its history, the beginning of the end. The area was affected by neglect and decay.  The zoo closed in September 2003. There was a large a mortality of animals, due to the lack of food, space and water, while some animals disappeared without a trace or are transferred to other facilities. In 2013, the entrepreneur Francesco Floro Flores took over the zoo to restore the splendor which over the years it had unfortunately lost.