The Last Hunter-Gatherers of the Himalayas 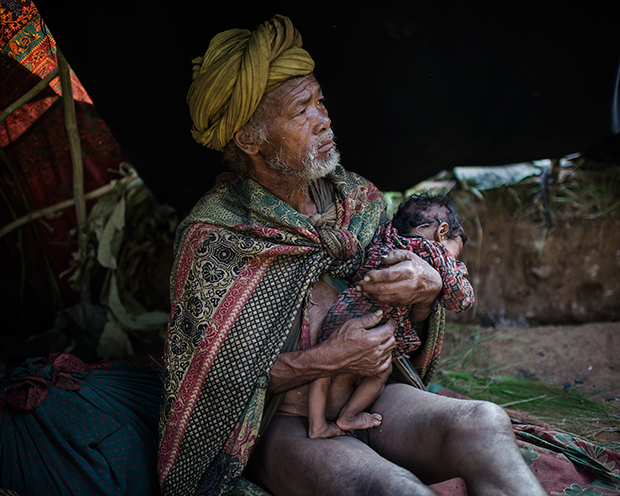 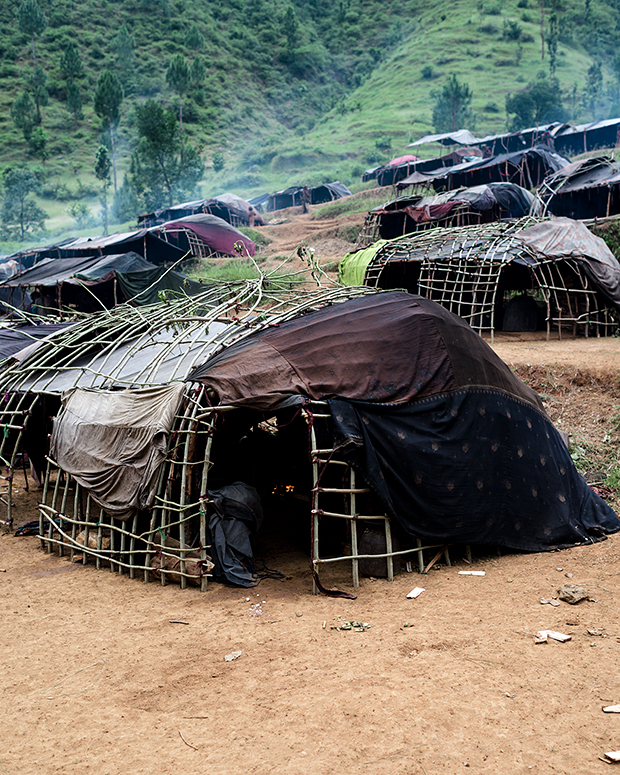 German-based Nepalese photographer Ram Paudel recently returned to his country of birth to document the last of the Raute tribe, who live a nomadic existence in the foothills of the Himalayas, migrating habitually through the forests of far-western Nepal. Following a treacherous three-day bus route, Paudel finally landed in one of the Raute camps hidden-away in the folds of the forest. Calling themselves the ‘Kings of the Forest’, this tribe of hunter-gatherers subsists mainly off monkey meat and their sole source of income: wood-craft.

Fiercely resistant to change, the Raute elders are determined to upkeep their traditional values and preserve their unique identity, while in contrast the youth long to reach out to the outside world. With Paudel’s privileged access to the community and his ability to speak Nepalese, he was awarded an intimate porthole into their daily lives as they unfolded throughout the five weeks he stayed in the camp. Now that the monkey population is fast-declining and the influx of cheap plastic goods is standing in for the Raute’s wooden creations, the future of the Raute tribe is shadowed in uncertainty.

We speak to the photographer to find out more about this illuminating project. 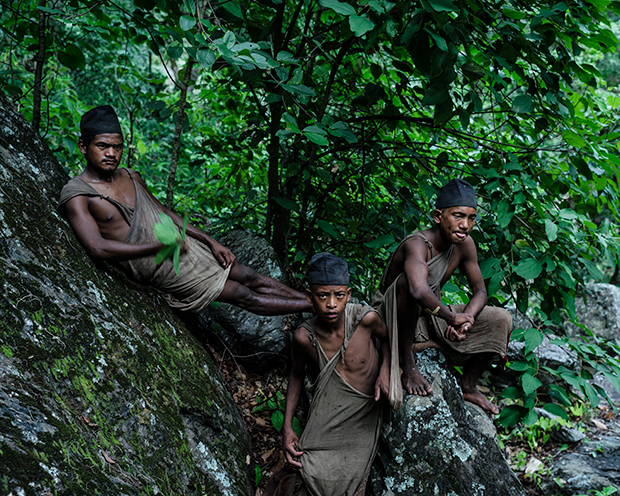 How did you locate the Raute tribe?

I prepared well before traveling to Nepal to visit the Raute tribe. I was in contact with a Kathmandu-based NGO who had worked in the past for this tribe. I got basic information about them and the approximate region where they could be staying. After travelling three days by bus on a dangerous muddy road, I met with a local newspaper reporter in Dailekh District (mid-west Nepal) who helped me to reach the Raute camp. 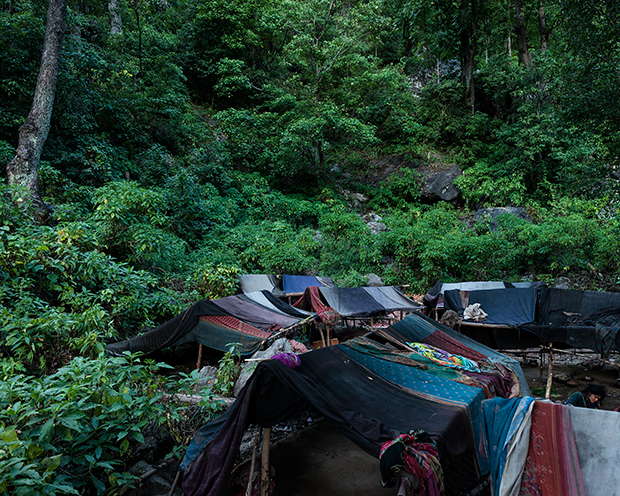 The temporary housing of a small group of Raute who are residing in the middle of forest in order to gain easy access to potential raw wood to manufacture wood ware.

How were you able to communicate with the tribe, and how did you get access to stay with them for five weeks?

The Raute people speak among themselves their own non-written tibeto-burman language, which was completely foreign to me. Because of my Nepalese origin I speak the national language. After arriving in their camp, I was astonished to hear how well they could speak Nepalese, especially the young guys. These young Raute learned to speak through their encounters with villagers when trading their ware in the surrounding villages. The fact that they spoke the language was a great opportunity for me to understand them, their concerns, and the whole meaning behind being a nomad. It also gave me the option to develop my photographic work the way I had planned. Almost after four weeks of my stay, an elder Raute summoned me and asked, ” Why you are coming every day to our camp and taking pictures? What you will do with all these pictures?” At that moment, I thought I should probably leave straight away, otherwise they would not tolerate me any longer.

They don’t allow outsiders to spend the night with them in their camp. I had to respect their rules. That’s why I stayed in a small village with some farmers. From there, I walked every morning to the Raute camp. 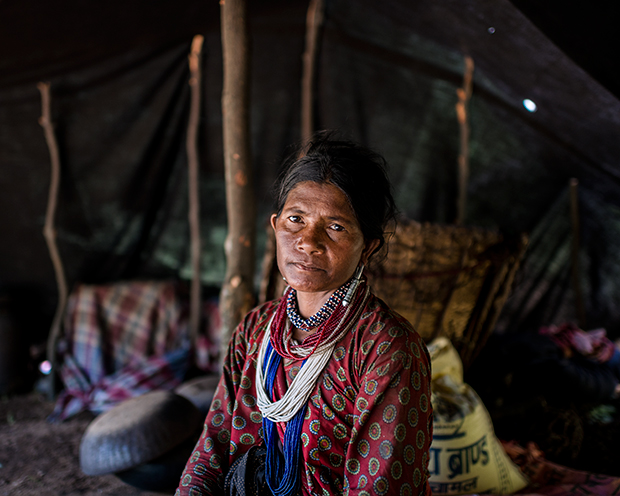 How welcoming were these people towards an outsider?

I have heard that usually they are very skeptic towards outsiders. They don’t  want to talk with non-Raute people or get too close to them. If you ask them a question, they will rarely give an answer. Only selected community leaders are allowed to talk about their internal affairs with an outsider. At the end of my stay they performed their traditional dance and music, and wanted to thank me for everything I had done to help them. In addition, I got the feeling that they accepted me from the beginning as one of them, which makes me want to return very soon.

Can you talk us through a typical daily routine in these people’s lives?

This is a small closed community of about 150 members, living mostly together as a group.While the strongest group of the Raute men go to hunt monkeys, the other group of wood choppers go into the forest and cut down trees to carve wood products. Those who have already finished their wood ware and are ready to exchange or sell, visit the villagers to exchange their craft for food and vegetables. Women and girls are responsible for preparing foods. They also venture into the forest to collect firewood, wild season vegetables, and fresh water from the spring. 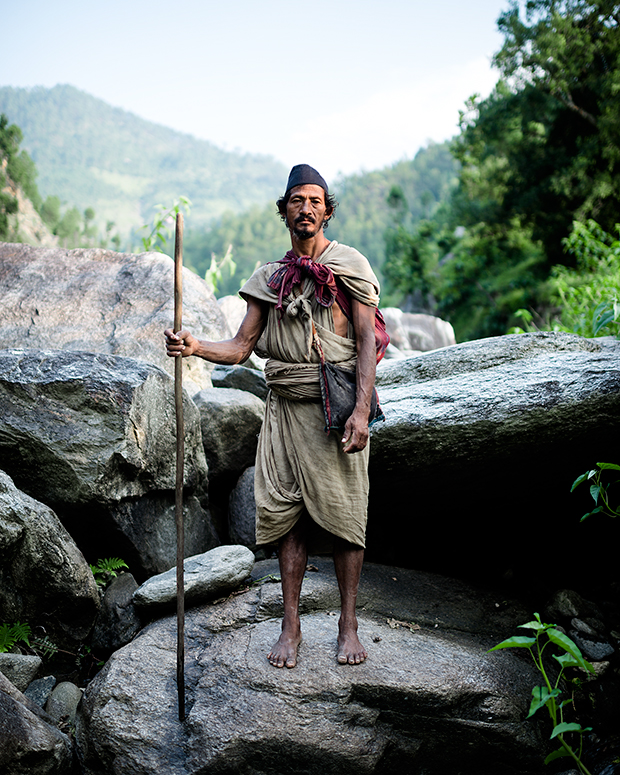 A Raute man in traditional outfit. It was a successful day for him and his friends. He is carrying the prize on his back. It will bring bad luck and ruin their hunting when an outsider sees it. That’s why they never allow outsiders to go with them into the forest. 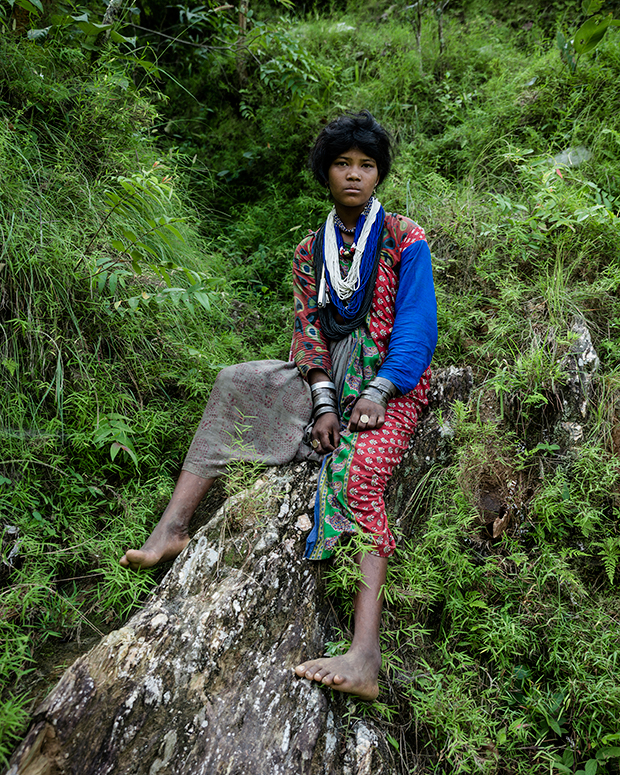 A Raute girl in typical dress. It is called “Cholo” and “Fariya”. All Raute women and girls wear many rings and colorful necklaces.

Do you have a particularly memorable experience whilst staying with this tribe?

During my stay I was whispered to many times, and was asked by many different young men when I was thinking to return to Kathmandu. Each time I’d tell them that I didn’t have any plans. Weeks later, I was washing in the river when I saw Chakra Narayan Shahi, a young Raute coming down with his wife to go and exchange his wood ware in the village. I called him over and asked why he wanted to know when I returning to Kathmandu. Ckakra Bahadur shahi told me, I will only tell you if you swear not to tell anybody else. I promised him I wouldn’t. He looked around him – none of the Raute could be seen.  “If it’s no trouble to you, I would like to come with you to Kathmandu and I want to see plane (Chil gadi),” he said, “the other Raute are already in Kathmandu. I have never been there.” In this moment I had no words. These young Raute are curious and interested to learn new things. They might be also interested to socialize and integrate with the normal non-nomadic society. But I think there are some leaders in the society who do not agree and forbid them go out.

The global climate change has also strongly affected the living conditions of the nomadic tribe. As they report, it will not rain at the right time, which means that vegetables and other foods cannot grow in the forest. Also, their prize monkey population is dwindling, and one day in the future they will disappear completely from the region.

Nevertheless, they are proud to be nomads, enjoying the freedom of their itinerant way of life and their deep connection with nature.

To see more of Paudel’s work, visit his site at: www.rampaudel.com. 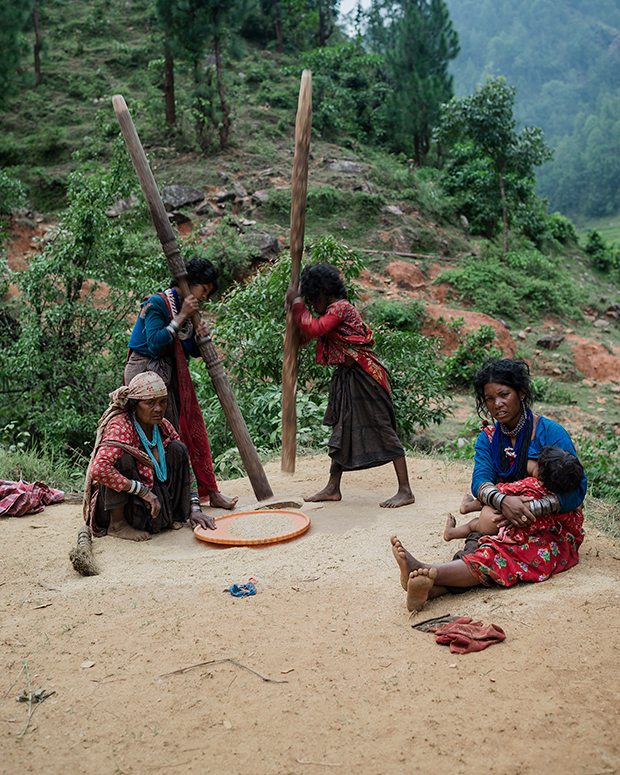 Raute women and girls are pounding natural rice for dinner. They are responsible for preparing food. 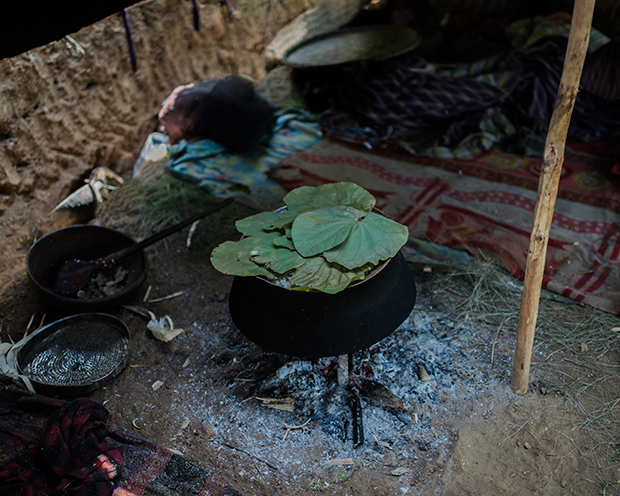 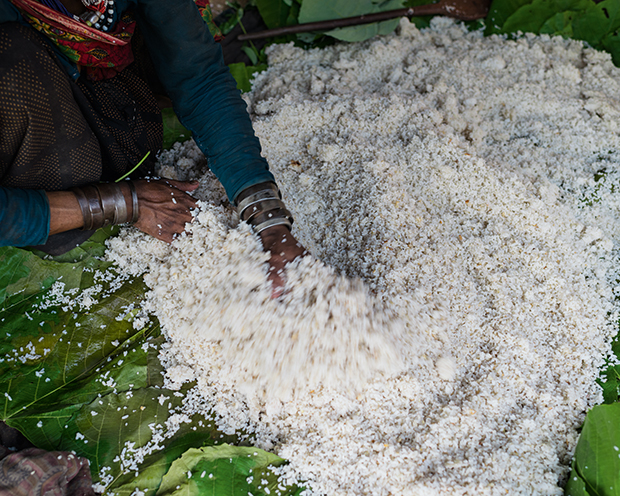 Rice is a very important food in this community. A Raute women is drying cooked rice to make schnapps -“Raksi”- for their upcoming house-warming ceremony. 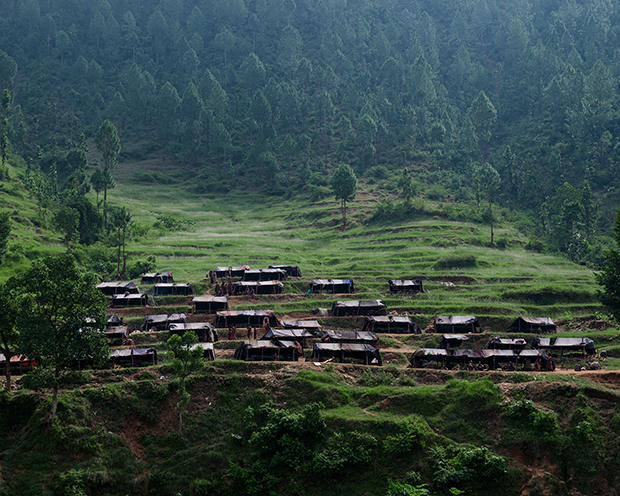 A temporary settlement of the last nomadic tribe of Raute in the far-west of Nepal. Normally they stay 2-3 months in one place. If in case someone from their group dies they will leave the place early the following morning and move to a new place. As their animistic belief says, it will bring only misfortune when they stay longer in the same place where someone died. This is also what keeps them moving and maintaining their nomadic lifestyle.Their nomadic journey takes some days and nights. 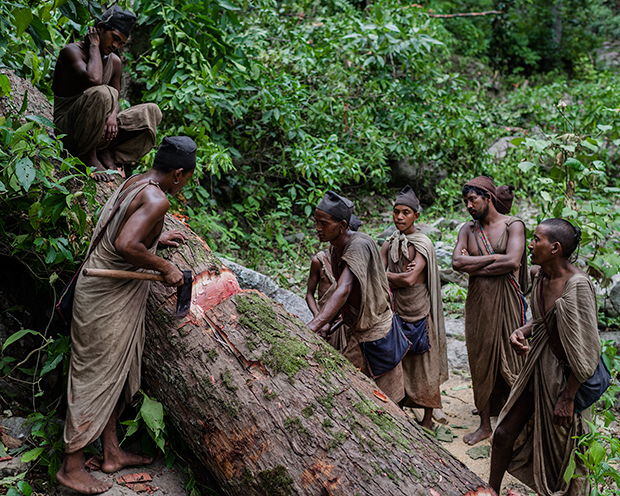 After cutting down the tree trunk, they will make small blocks of wood and carry them to their camp where they can finish the work whenever they have time. To manufacture the wood ware they use very simple, varied types of ax. 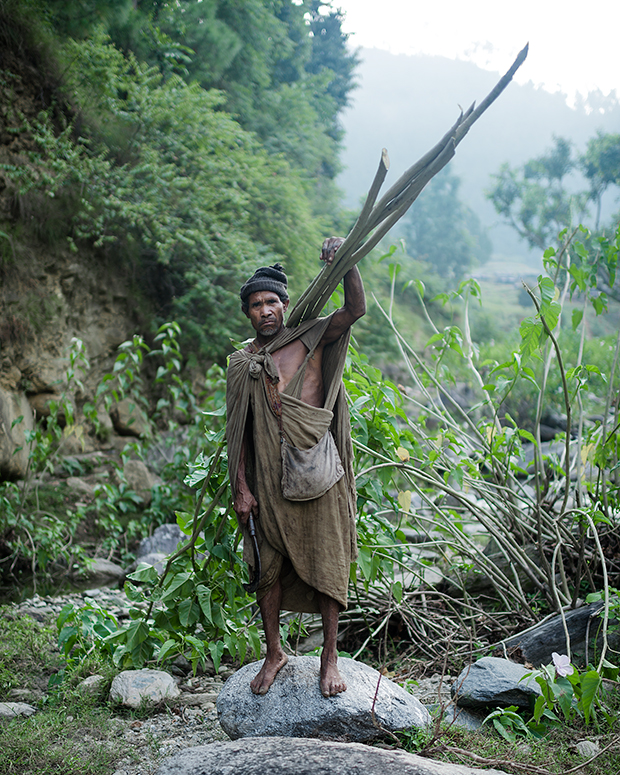 A Raute man is collecting poles to add to his camp. 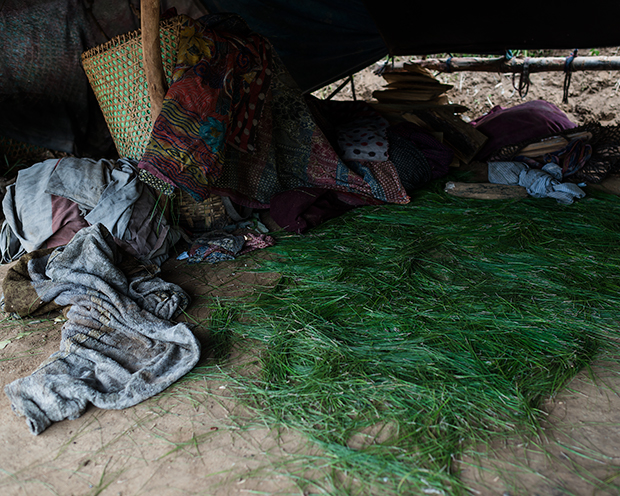 Pine leaves are softer than other grass. Therefore, they use it in the dry summer as a mattress and sleep on it. It also helps them to cool down.