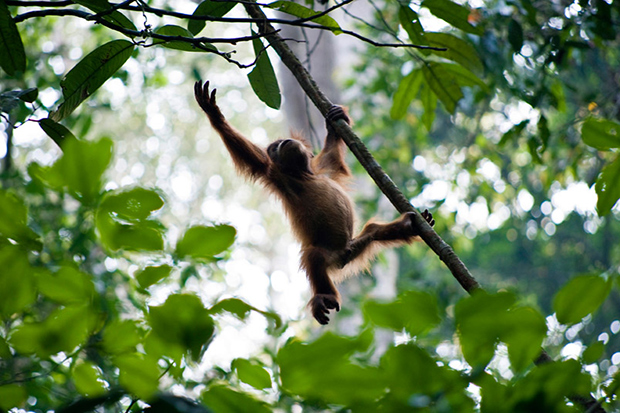 A free-roaming young orangutan in Bukit Lawang, an orangutan sanctuary within the Gunung Leuser National Park in Sumatra, Indonesia. 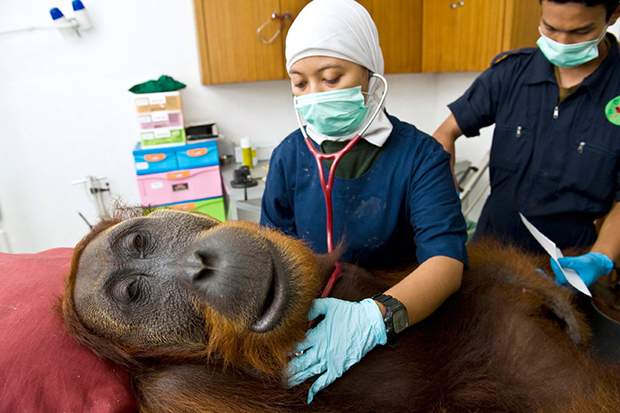 When Hamburg, Germany-based photographer Sandra Hoyn first encountered the Indonesian orangutans, she was struck by their humanity, discovering signs of joy, pain, and confusion painted across the great apes’ faces. The animals, she explains, were like people but were somehow possessed of a gentleness and quietude that often eludes mankind. After all, she says, they share 97% of our human DNA. For The Last Orangutans, Hoyn documents the critical endangerment of the mild-mannered, sensitive creatures, whose habitats are being devastated with the widespread development of palm oil plantations on the Sumatra and Borneo rainforest.

Wild orangutans are found only on the two Indonesian islands, and in the past ten years alone, their populations have been decimated. Today, only 50% of the orangutans that once flourished across the land survive, and they continue to face deadly threats like deforestation, poaching, and the wildlife pet trade. In Borneo, less than 54,000 individual animals remain; in Sumatra, that number drops to 6,600. To date, four fifths of the rainforest has been overtaken by palm oil plantations, where palm and palm kernel oils are harvested for foodstuffs, cosmetics, and biofuels. Indonesia, says the photographer, is responsible for half of the planet’s supply of the product.

In addition to the orangutans, tigers and elephants face critical endangerment. For the project, Hoyn photographs not only the animals but also the Orang Rimba tribespeople displaced by the growing plantations. In addition, she shadows some of the military organizations responsible for stopping devastating forest fires and visits animals being treated by Sumatran Orangutan Conservation Program. We spoke with her about the empathetic creatures and what we can do to help.

How did you gain access to the Sumatran Orangutan Conservation Program facilities?
“Each visitor has to have a blood-check before he is allowed to enter the SOCP care center in order to protect the orangutans from tuberculosis and hepatitis. It is forbidden for visitors to touch the orangutans in the quarantine center because they could get infections from us.” 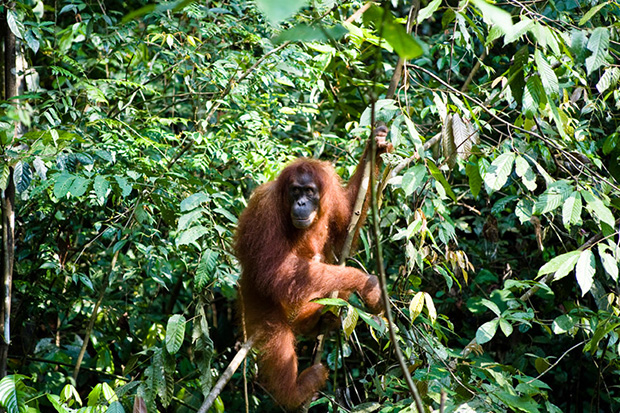 A free-roaming orangutan in Bukit Lawang, an orangutan sanctuary within the Gunung Leuser National Park in Sumatra, Indonesia. 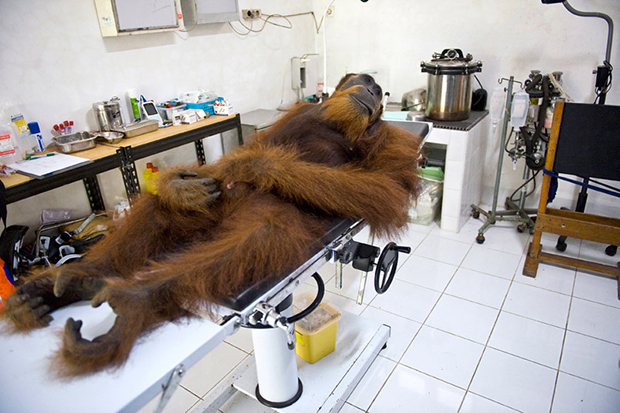 Angelo, a 14-year-old male orangutan, is waiting for medical examinations in the Sumatran Orangutan Conservation Program center in North Sumatra. He was found in a palm oil plantation with air gun metal pellets embedded in his body.

Did you get to meet any orangutans? What are their personalities like?
“In a care and quarantine center at SOCP in Batu Mbelin, near Medan, North Sumatra, I was allowed to take pictures of the treatment of some orangutans. There orangutans get a medical check and a minimum 30-day quarantine period to ensure they carry no illnesses. Only healthy orangutans are allowed to have any contact with other inhabitants of the station to be eventually released to the wild.

“During my stay in the center in Batu Mbelin, I got to know two Orangutans: Angelo, 14 years and Siboy, one year. Siboy was found for sale on a market in Aceh before he was rescued. Angelo was found with air gun metal pellets embedded in his body. Many orangutans are kept as pets like Siboy or have been injured like Angelo by palm oil plantation workers or villagers.

“Siboy behaved like a human baby. He watched his environment and tried to play with everything around him. The staff at SOCP built him a cot made of thin tree trunks and some cloth. The nurse held him in her arms, and every time she put him into the cot to sleep, he started to cry and clung to her shirt. Sometimes, when I made photos of him, he laughed and tried to catch the lens or he watched with curiosity. Even the older orangutans are extremely playful. But never loud. They have very quiet behavior.” 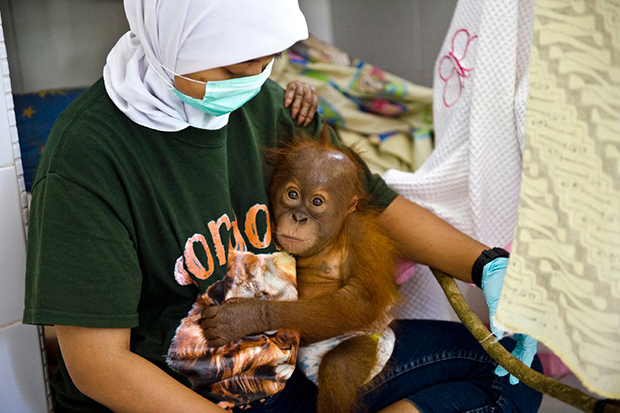 A baby male orangutan named Siboy at the Sumatran Orangutan Conservation Program (SOCP), which has helped over 280 orangutans rescued from palm oil plantations, poachers and pet owners. Siboy was found for sale on a market in Aceh before he was rescued. Some people keep baby orangutans as pets.

Could you tell us a bit about what they do in the treatment centers?
“Angelo was rescued from in North Sumatra by the government conservation agency and another group, the Orangutan Information Centre. [The people at] SOCP said if Angelo had not been rescued, he would not have survived, and the pellets in his body showed that local villagers had already been shooting at him, because they are afraid of adult orangutans. He was rescued shortly before I made the photographs.

“In the center, orangutans are given a full medical check upon arrival and treated for any illnesses. The staff at SOCP checked Angelo’s blood, his hair, made a X-Ray, etc. If he is not sick, he will be reintroduced in one of the national parks after a 30-day quarantine. They make fingerprints of all orangutans in the center to recognize them again.

“I saw that the staff of SOCP and orangutans communicated by body language. For example, when the staff is feeding them, the orangutans showed with gestures what kind of vegetables they prefered. I liked watching them and tried to read in their faces what they feel (anxiety, fear, anger and happiness).” 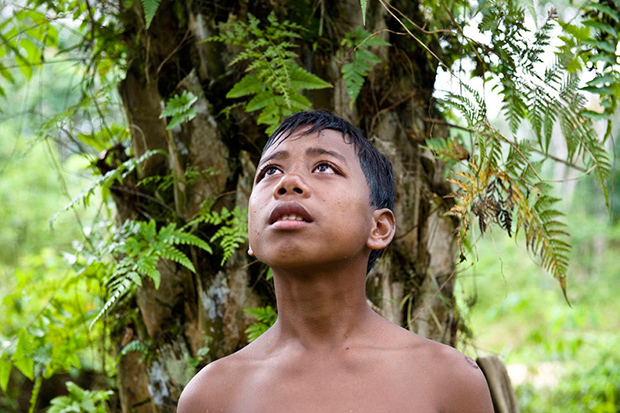 Penghijau, a Orang Rimba (people of the forest), lives a nomadic life in a palm oil plantation near the Bukit Tiga Puluh National Park in Jambi, Sumatra, Indonesia. Approximately 3,500 Orang Rimba still live as hunter-gatherers in the forests of Sumatra. But their habitat is threatened by illegal fires and deforestation.

Could you tell me a bit about the nomadic people who live in this area?
“Some time ago, Penghijau (the boy photographed in a palm oil plantain) lived with his family as Orang Rimba in the rainforest. Now they live between tradition and modernity in a palm oil plantation near the Bukit Tiga Puluh National Park in Jambi, Sumatra, Indonesia. Approximately 3,500 Orang Rimba still live as hunter-gatherers in the forests of Sumatra. Many Orang Rimba are afraid of losing their culture through modernization and an increasingly scarce habitat in the forest. They don´t want to move to the city, because there they would sink into poverty in slums. In the forest, they don`t need money. Sometimes they leave the forest to go to the market. There they exchange products of the forest in exchange for industrial products.” 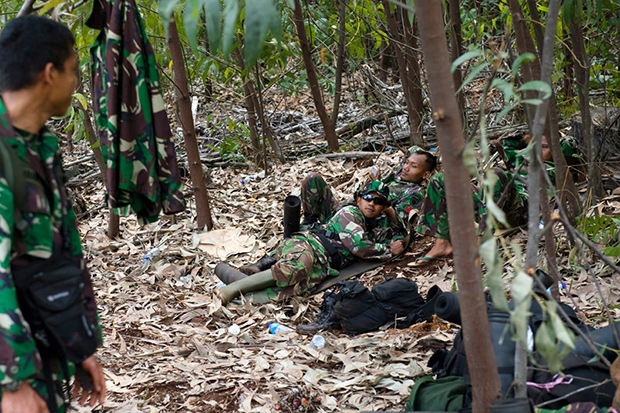 A team of forest fire fighters and military personnel during a break in the forest, Riau Province, Indonesia. 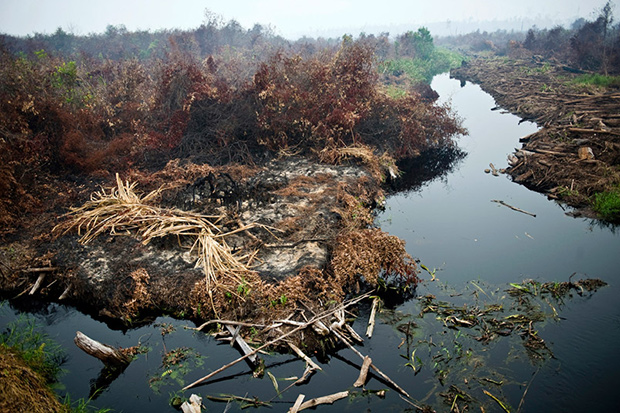 Scarred forest in the wake of deliberately set fires in the Riau province, Sumatra Island, Indonesia. 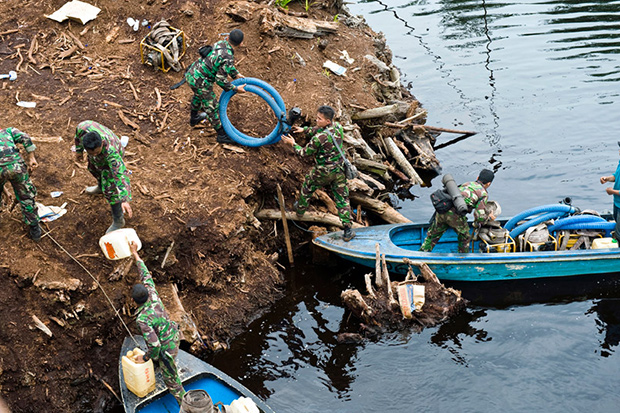 Military firefighters are preparing an operation against a forest fire.

Could you tell me a bit more about these firefighters?
“I asked NGOs about the locations of forest fires and also looked on for the locations of the current forest fires on an internet map. I rented a car and tried to find the places and followed the military firefighters. They arrived fast at the scene, worked professionally and efficiently. They also fight the fires by “waterbombing” from a helicopter. But the problem is that in the dry season fires burn easily. The firefighters carry guns because they are from the military.” 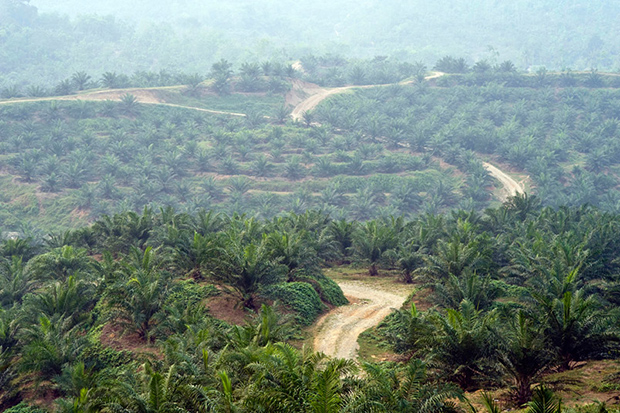 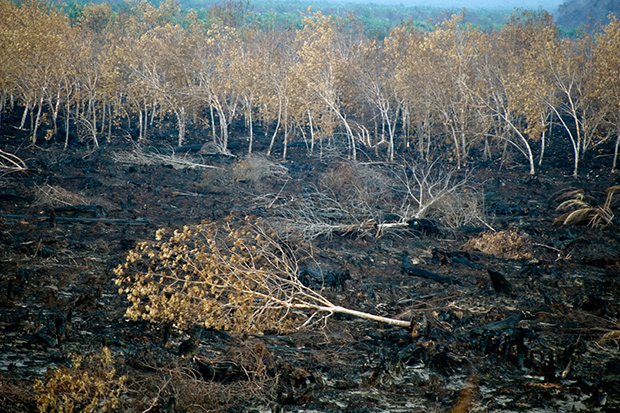 What can be done to help the orangutans?
“Support NGOs. SOCP (the Sumatran Orangutan Conservation Program) is a collaborative program involving numerous organizations. The aim of SOCP is to protect the remaining forests and save the last Sumatran orangutans. The Center at Batu Mbelin, North Sumatra, takes care of rescued orangutans, rehabilitates them and prepares them for reintroduction back to a life in the wild. SOCP has helped over 280 orangutans rescued from palm oil plantations, poachers and pet owners. Over 200 have been reintroduced to the wild. 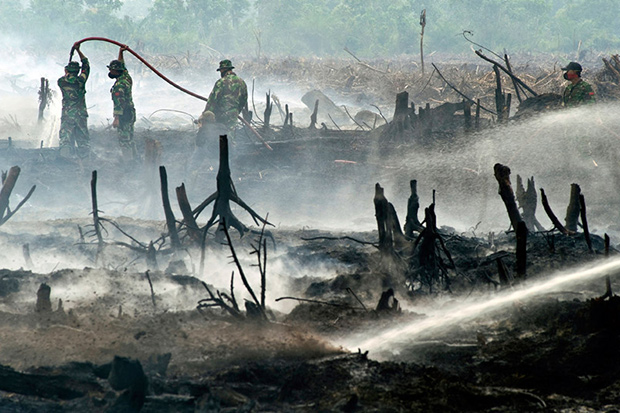 A team of forest fire fighters supported by military personnel in the process of controlling a forest spot fire in the Riau Province, Indonesia. Many of the blazes are being lit deliberately to make way for palm oil plantations. 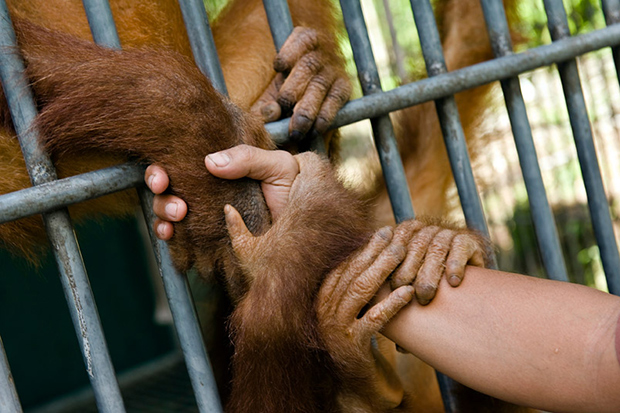 Orangutans reach out and hold the hand of a member of the staff at the center of the Sumatran Orangutan Conservation Program.