Inside the Homes and Lives of Papua’s Indigenous Kombai Peoples 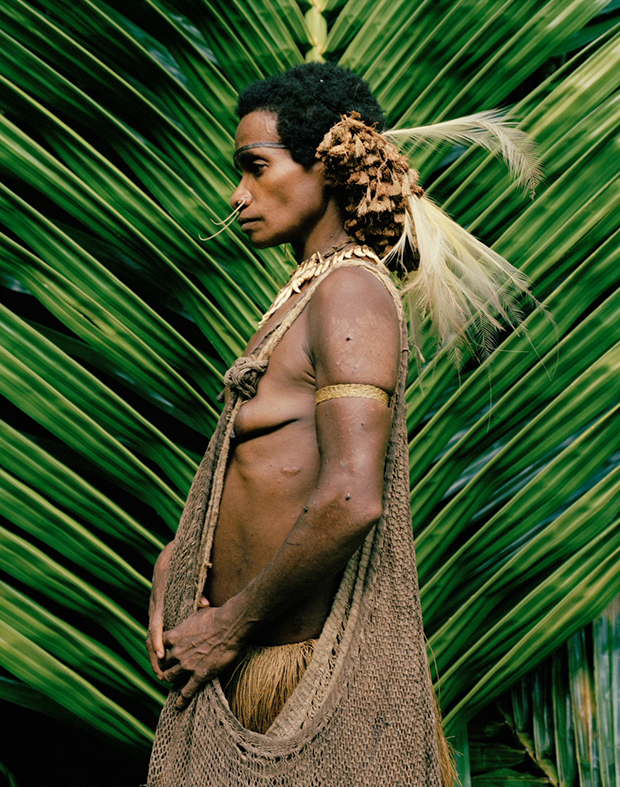 Woman against a giant sago palm. The feathers Kombai women wear as a sign of beauty include those of chickens and cockatoos. 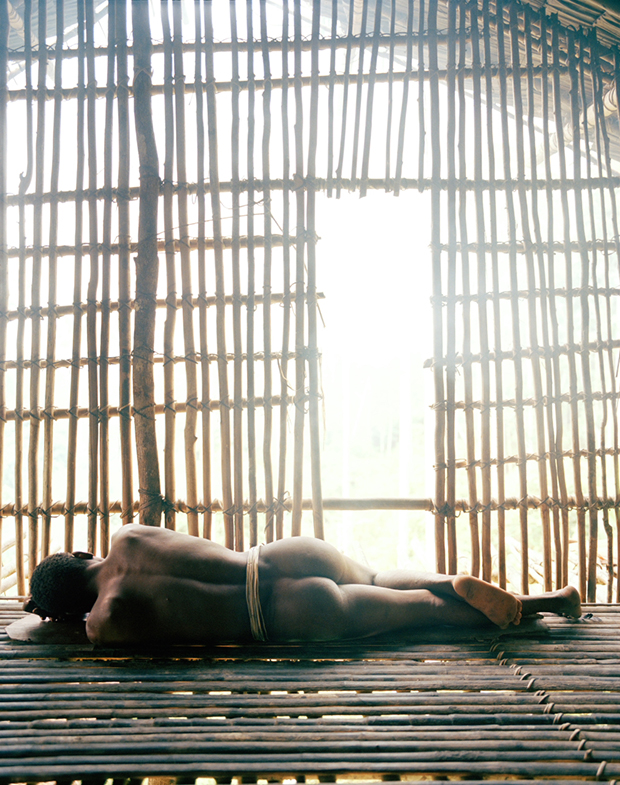 The stories and histories of the indigenous Kombai people of Papua New Guinea is distorted to a degree by legend, hearsay, and assumptions. The Kombai has survived by a hunter-gatherer lifestyle passed down over the generations and many millennia, abiding by their own codes of law, ritual, and ethics. Brooklyn-based photographer Frédéric Lagrange made the journey to the swampy foothills of the island forests to document the realities of daily life for the elusive tribe.

Lagrange’s photographs from his time with the Kombai were originally published in the first issue of Avaunt Magazine, alongside a thorough account by explorer Oliver Steeds, who along with colleague Mark Anstice, lived with a Kombai family for several months. The process of making portraits, admits the photographer, was difficult, not only because his words needed to go through two translators in order to be understood by the non-English-speaking tribe, but also because the camera itself seemed unfamiliar and foreign. To some, the idea of sitting in place for an extending period of time as Lagrange released the shutter seemed absurd.

As Steeds stresses from the get-go, Kombai culture can be a bit of an enigma to clueless Westerners. To make matters more confused, Steeds notes that members of the Kombai are jokesters, and sometimes things said in jest are misunderstood by foreigners. Steeds, for instance, was told that since the Kombai houses were built meters above ground and in trees, no mosquitos could reach them at home. The explorer’s gullibility and subsequent confusion at being bitten was of endless amusement to his hosts, and the same nonsensical statement—that mosquitos could not fly to the tops of trees—was also picked up and reported in earnest by BBC.

Jokes and superstitions aside, it seems that both Steeds and Lagrange found in the Kombai people a resilient and hard-working community fighting for survival. The conditions in the forest are extreme, wet, and hot. The men spend their days hunting and axing Sago palms, while the women process the tree’s pulp, which makes for the mainstay of their diet.

Reciprocation, kindness, and neighborliness are cornerstones of the Kombai value system, reports Steeds, and these ideals are realized in the quinquennial or decennial Sage Grub Festival, when one host clan invites members of surrounding tribes to enjoy a feast of the grubs that grow within the decaying trunks of palms. The grub is a luxury and a treat, and the hosts always feed each one of their guests—sometimes numbering in the hundreds—before eating themselves.

Sadly, the Kombai and their hunter-gatherer practices are under threat and have been since the Indonesian occupation of Papua began in 1963. It’s estimated that more than 100,000 natives of the island have been slaughtered by Indonesian soldiers in the last half-century. Kombai numbers have dropped to 4,000. With pressure from big fuel and mining companies, their forests are being razed, and the threat of displacement lingers overhead. 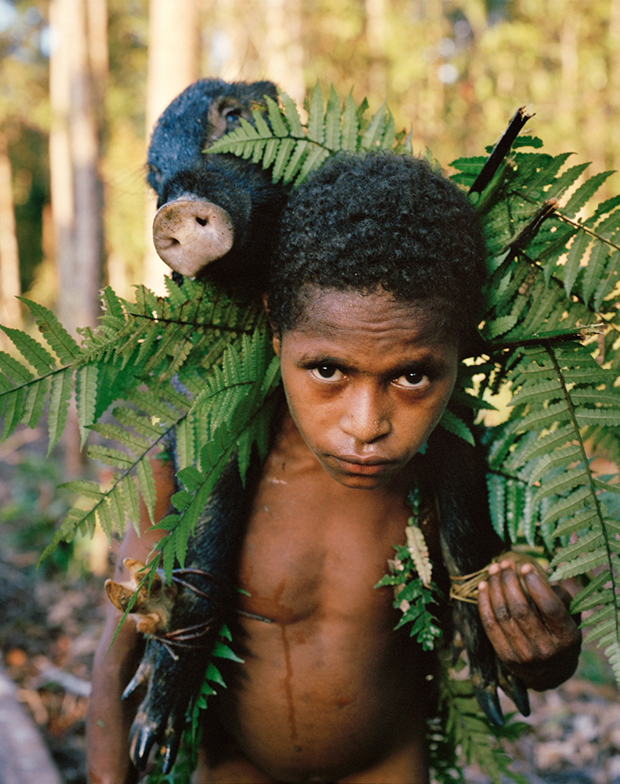 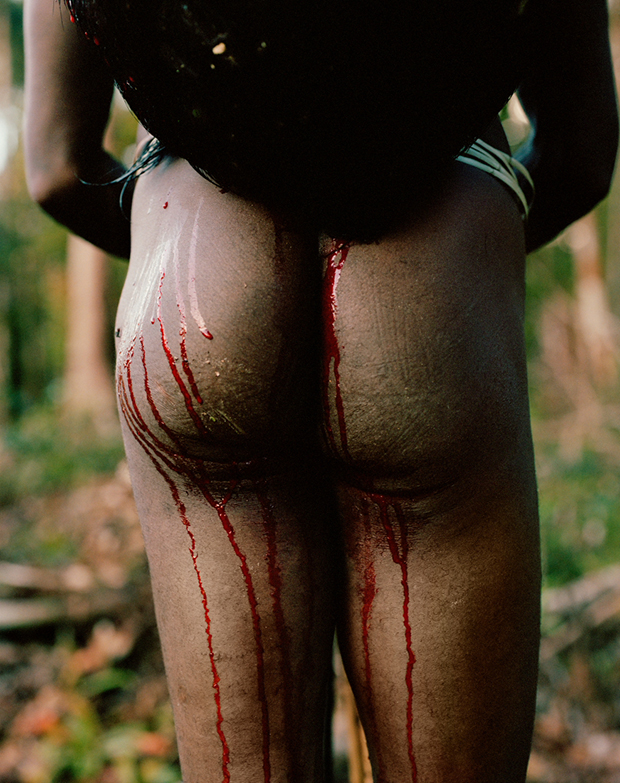 Detail of hunter carrying a freshly killed pig on his back, with blood pouring onto his lower back. 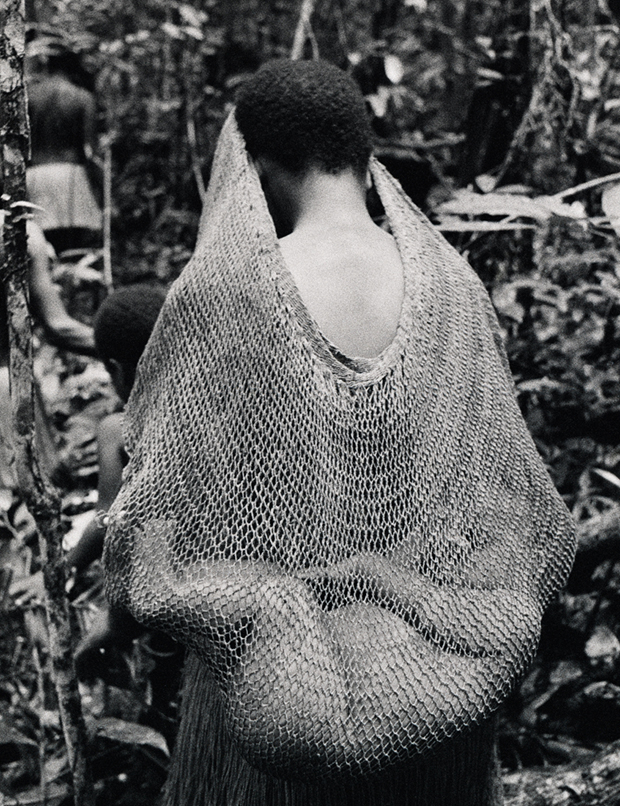 Mother carrying her baby in a root bag. 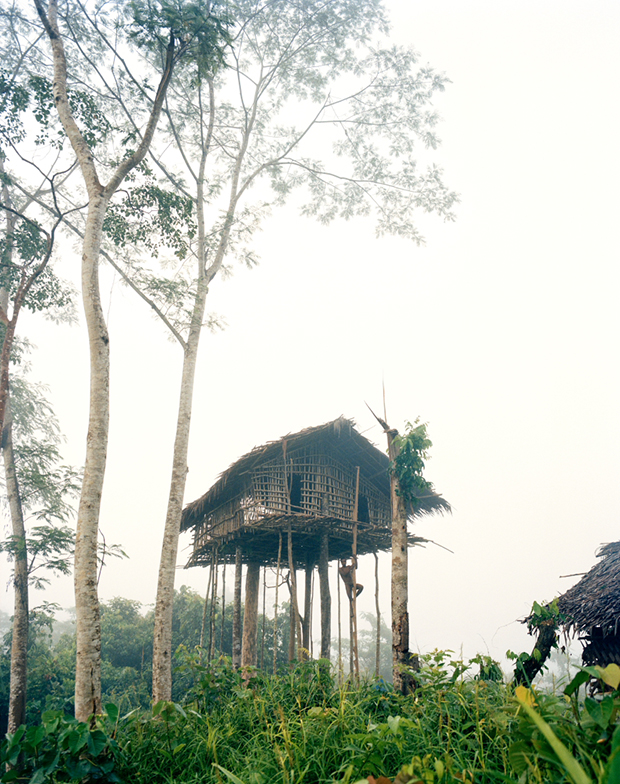 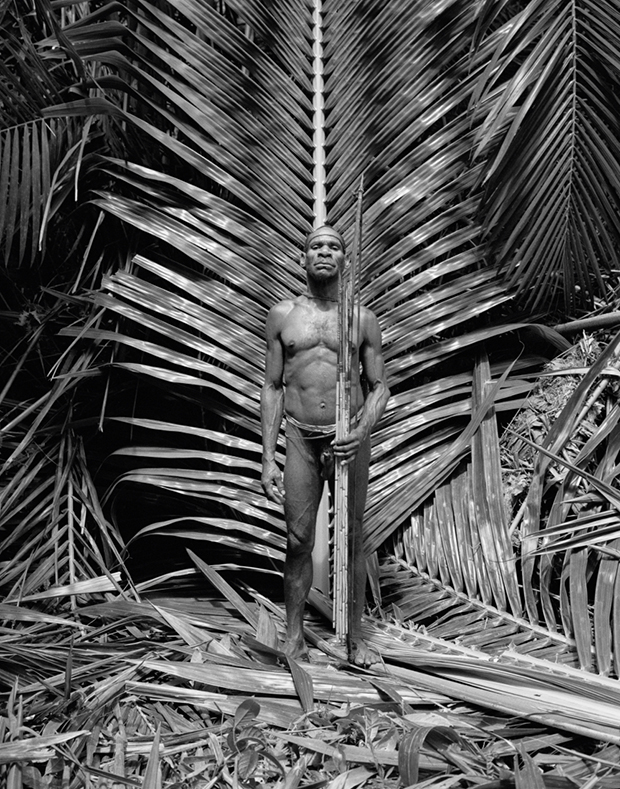 Hunter standing against a giant sago palm carrying bows and arrows made of cassowary bones and dry sugar cane stick. 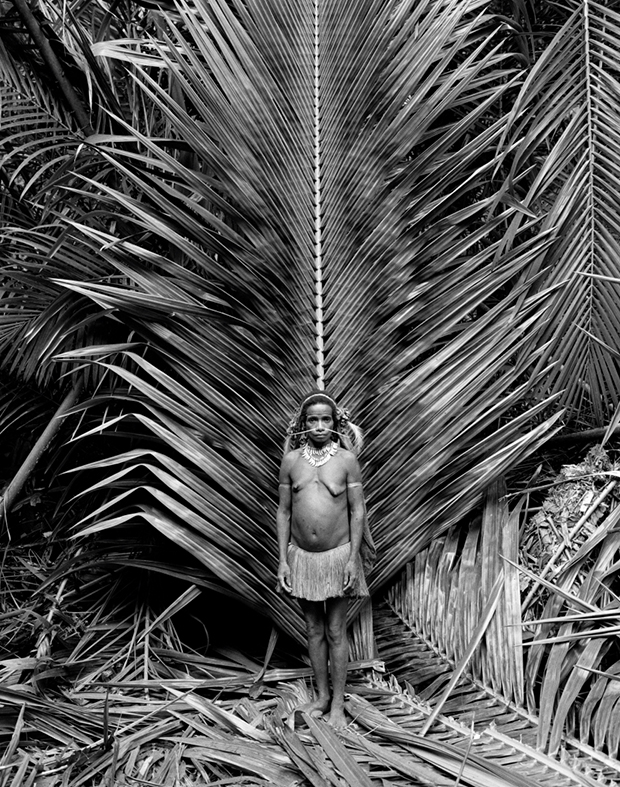 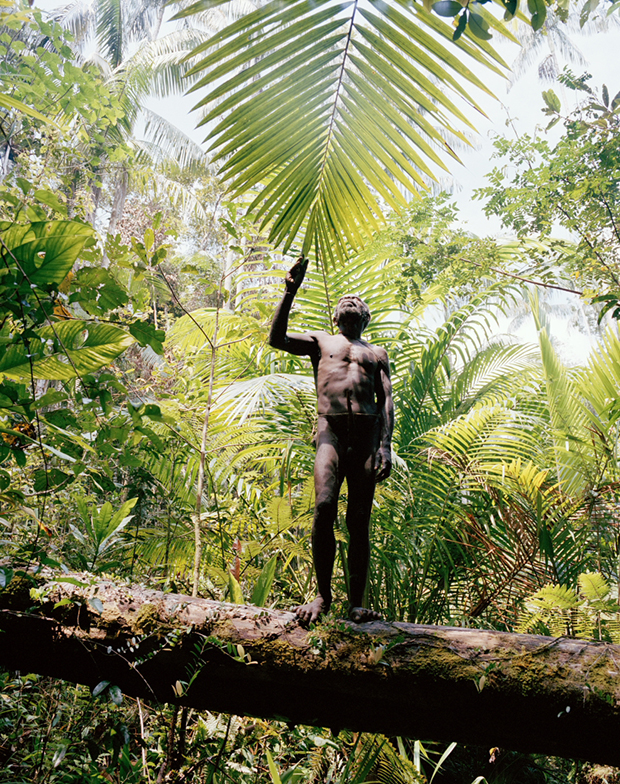 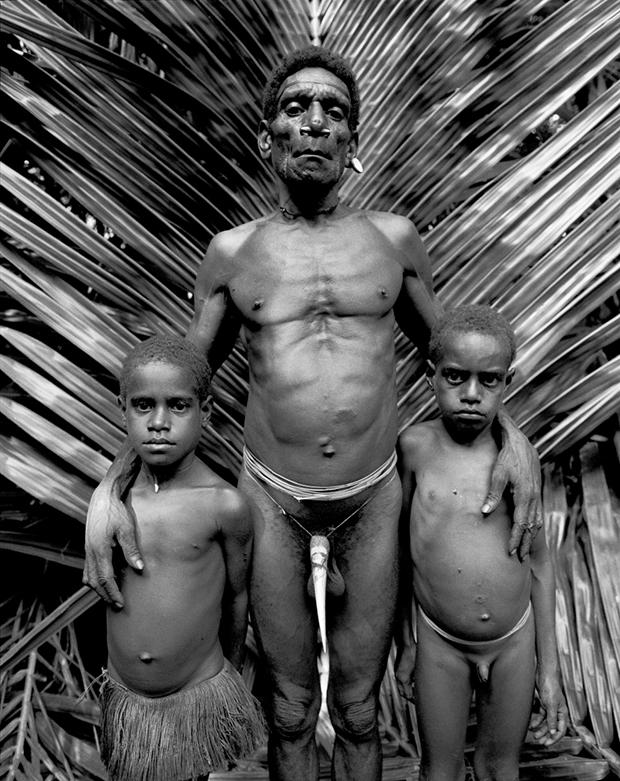 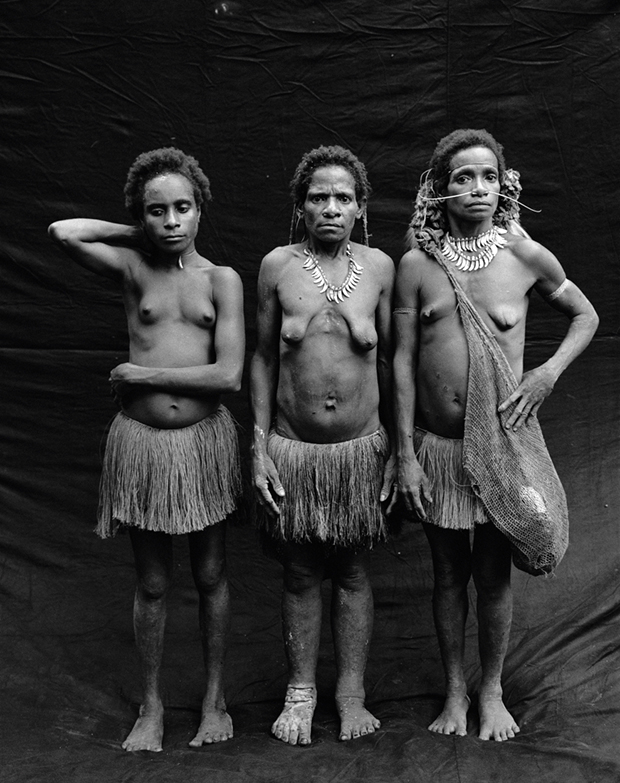 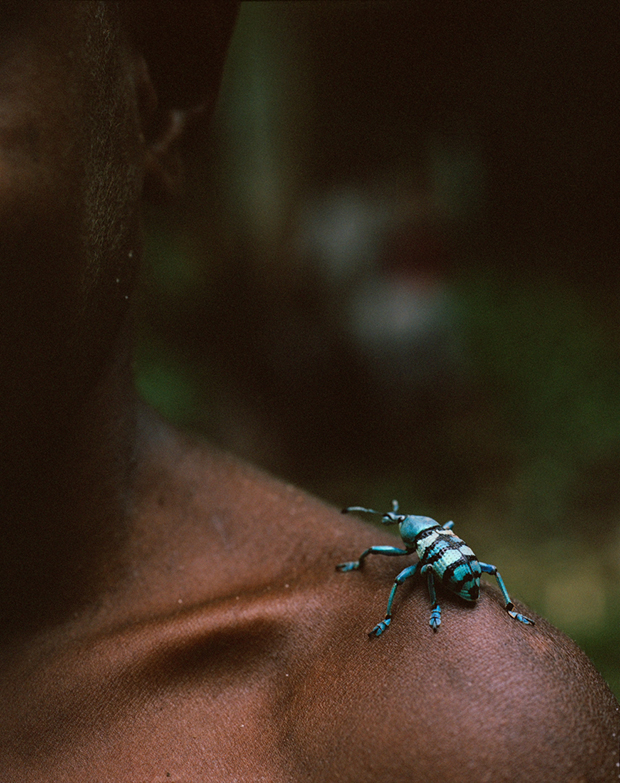 The size of the insects was mesmerising. In the rainforest the natural environment, trees and birds had a superlative quality. 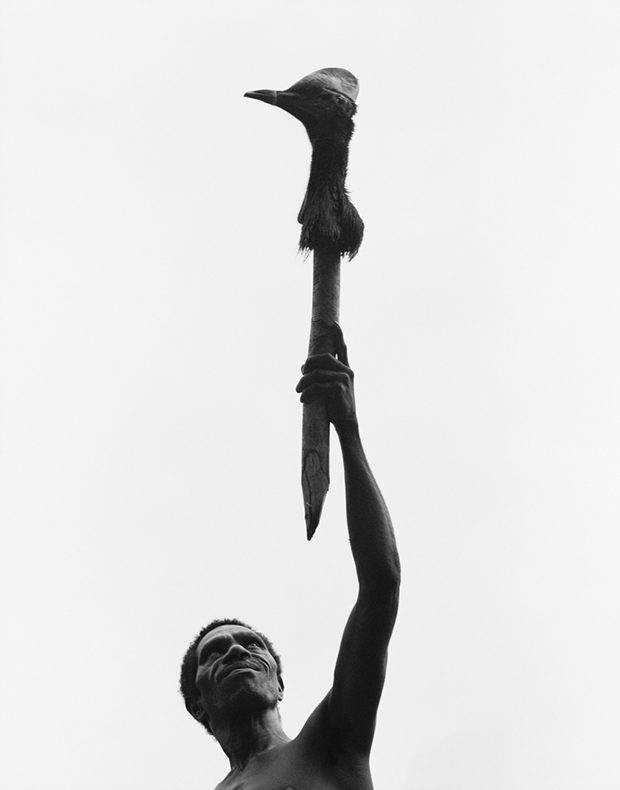 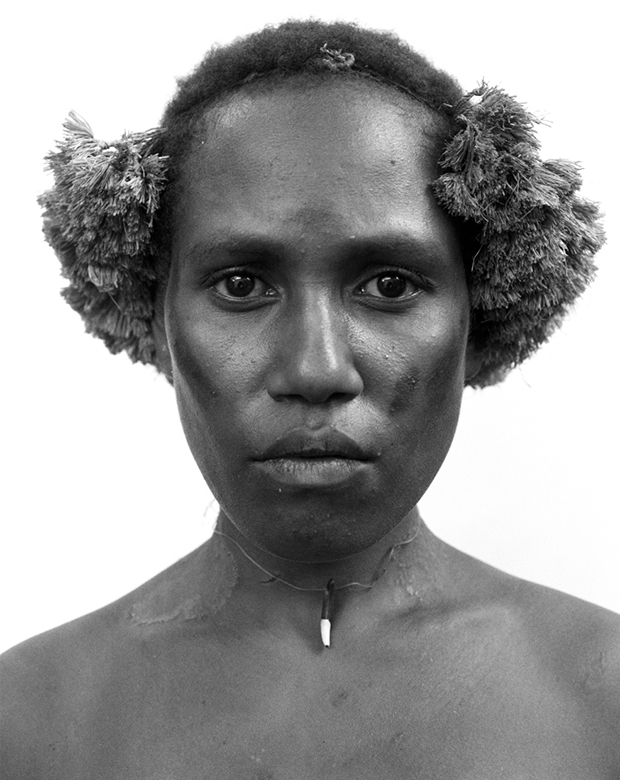 Woman wearing a dry moss crown. We had around 20 porters forming a quarter-of-a-mile-long procession, carrying our supplies and tents for the two-week-long trek, in that secluded part of the Papuan rainforest. Five more porters were hired to carry my photo equipment, stands and backgrounds. 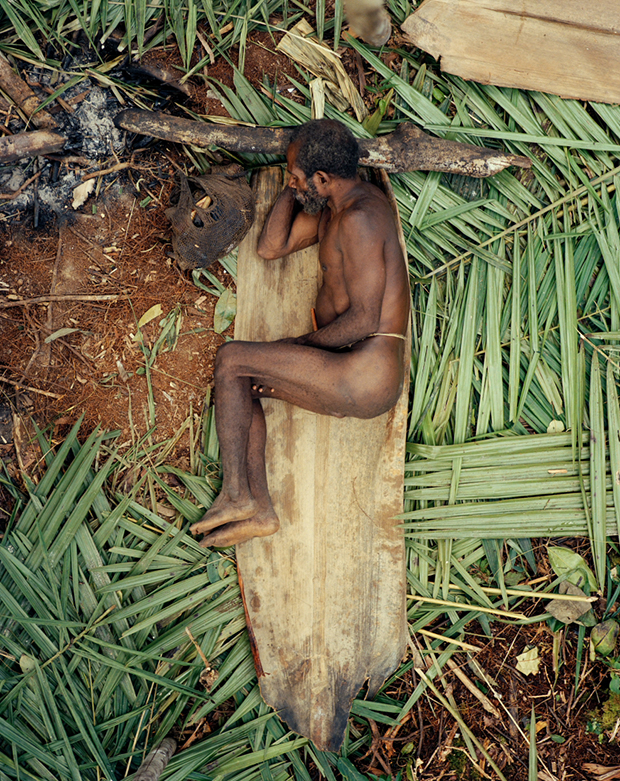 Kombai hunter at rest. A few times I was asked why I was wearing clothes and told that it would make my host less afraid and more at ease if we were all naked. 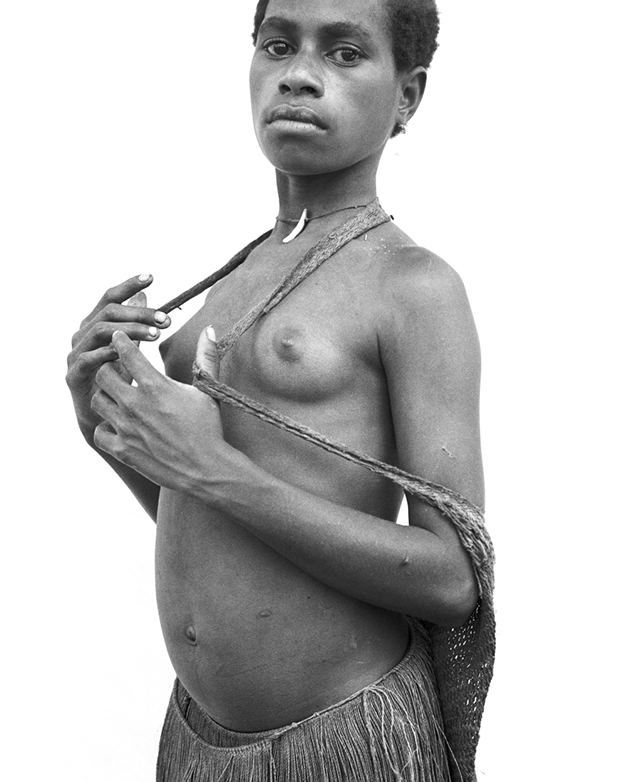 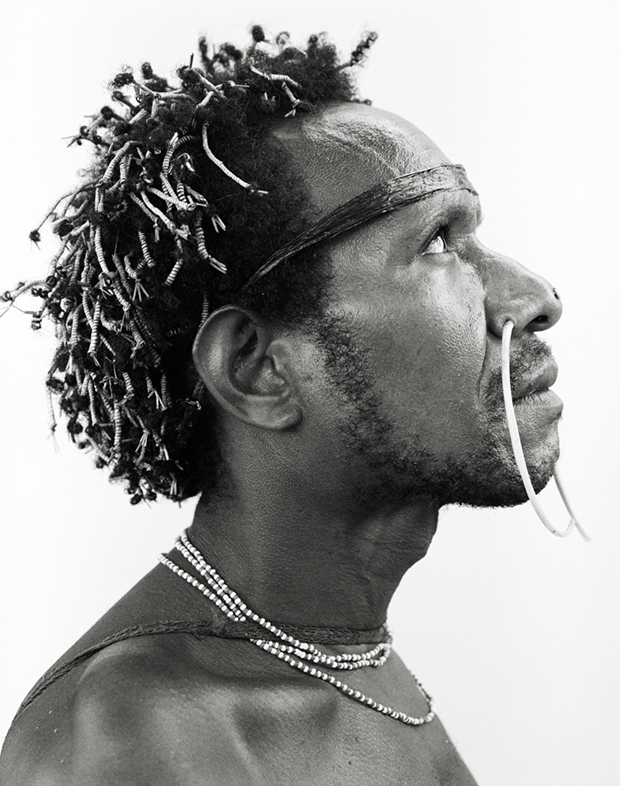 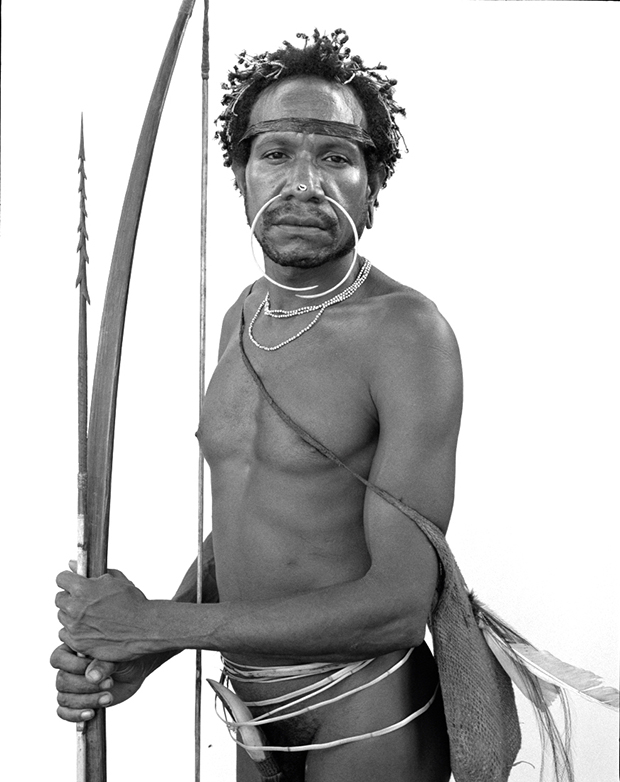 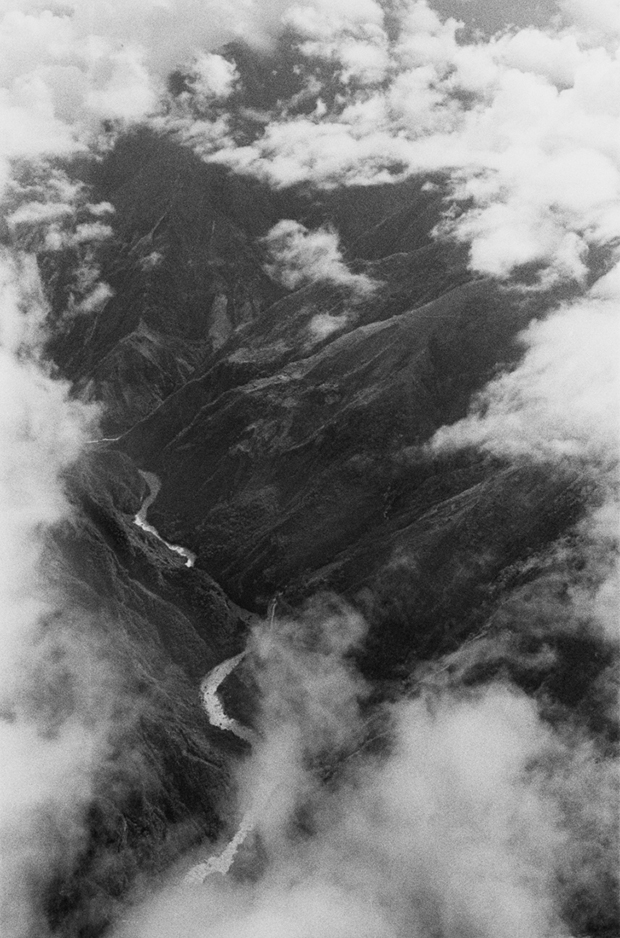 View of the valley as we flew toward Wanggemalo. A canopy of dense forest, wildlife and no human presence for hundreds of miles.