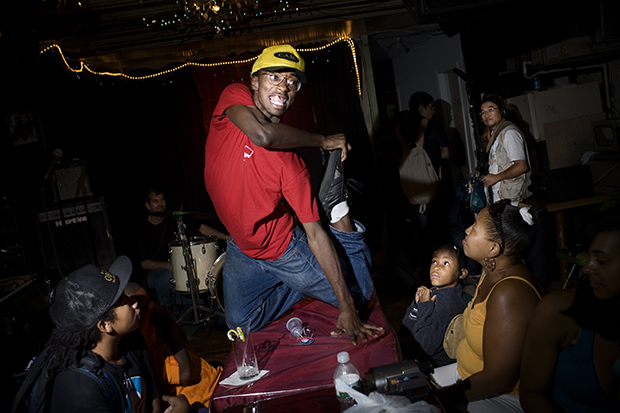 On June 26th, Feature Shoot hosted the second edition of The BlowUp, a new quarterly event in which we ask a selected group of NYC-based photographers to each tell the stories behind one of their favorite images. This time, the theme was Subcultures, and Deidre Schoo chose this shot of Flex dancer Storyboard Professor, the man who first introduced her to the performance phenomenon that would ultimately launch her in-depth documentary film Flex Is Kings. Flex is a dance movement unlike any other which originated from East New York, Brooklyn. Schoo met Storyboard during a shoot at a variety show in Harlem’s St. Nick’s Pub; when he left the venue, she followed. Since then, Storyboard and Schoo have built a lifelong bond. Although Battlefest, the quarterly Flex competition, would soon become a sold-out sensation, the photographer gained access when it was still in its early days, its artists just entering the scene but filled to the brim with enthusiasm and talent.

The next BlowUp event will take place on the evening of December 10, 2015 at ROOT (Drive In) from 6:30-9:00 PM, and this time, the theme will be photography that has gone viral. We have some incredible photographers lined up to speak including Sophie Gamand, Arne Svenson, Caroline Tompkins, Victoria Will, Kristine Potter, Allaire Bartel, Amos Mac, Kirra Cheers, and Henry Hargreaves. You can purchase tickets here.