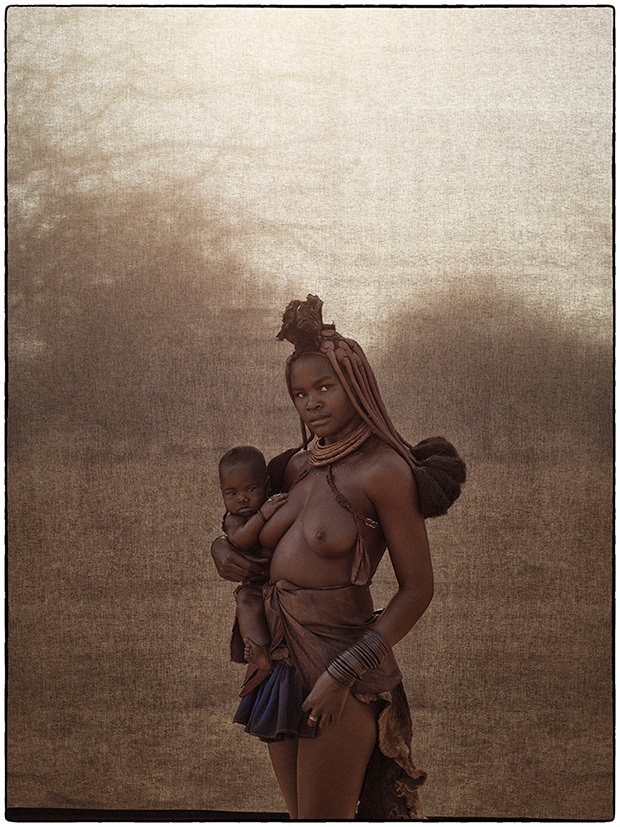 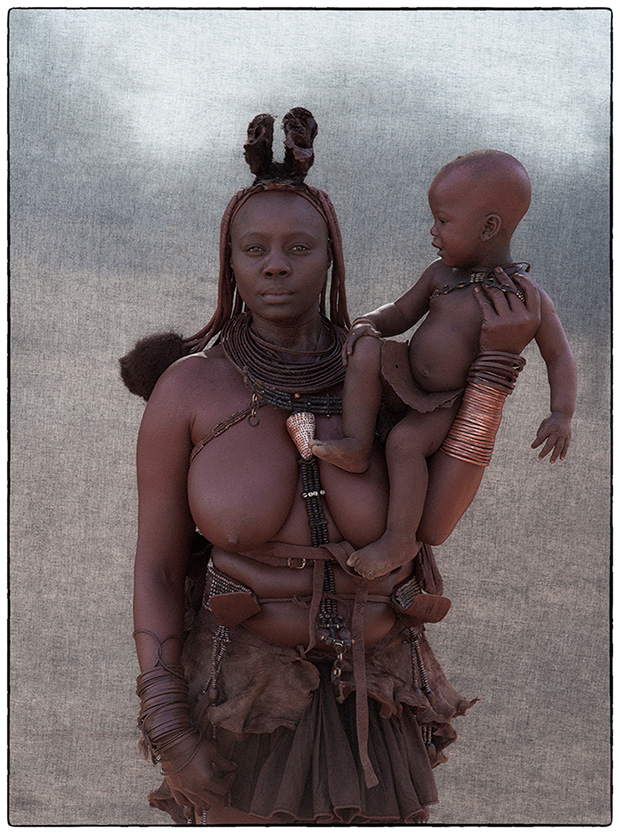 The Ovahimba are semi-nomadic cattle breeders who live in the Kaokoveld region of south western Africa, an arid but beautiful scrubland along which the life-giving Kunene River forms a natural border between Angola and Namibia.

The Ovahimba have generally resisted modernity and still live according to the precepts of their ancestors whom they consult on a daily basis through the medium of a sacred fire which is never allowed to be extinguished. They have neither electricity nor mass media, but their wealth is determined by the ownership of cattle and by how many children they have.

Encroaching urbanization radiating outwards from remote desert towns like Opuwo has brought dramatic change into the lives of the Himba, and some have been sucked into the vortex of modernity and also by the dangerous vice and temptation by which it is accompanied.
Today, life for the Himba is in transition between these two opposing forces and fewer than ten thousand still cling to the traditional ways of their forefathers.

A traditional Himba village consists of a circle of thatched huts which surround a central cattle byre. Outwardly their lives appear simple and bucolic yet, their spiritual and social structures are highly complex and their passage through life is marked by a series of elaborate rituals which the Ovahimba believe are overseen and directed by their ancestors.

British photographer Christopher Rimmer recently began documenting the last remaining Ovahimba in a series of striking, large scale portraits. I spoke to him about his latest project from Los Angeles. 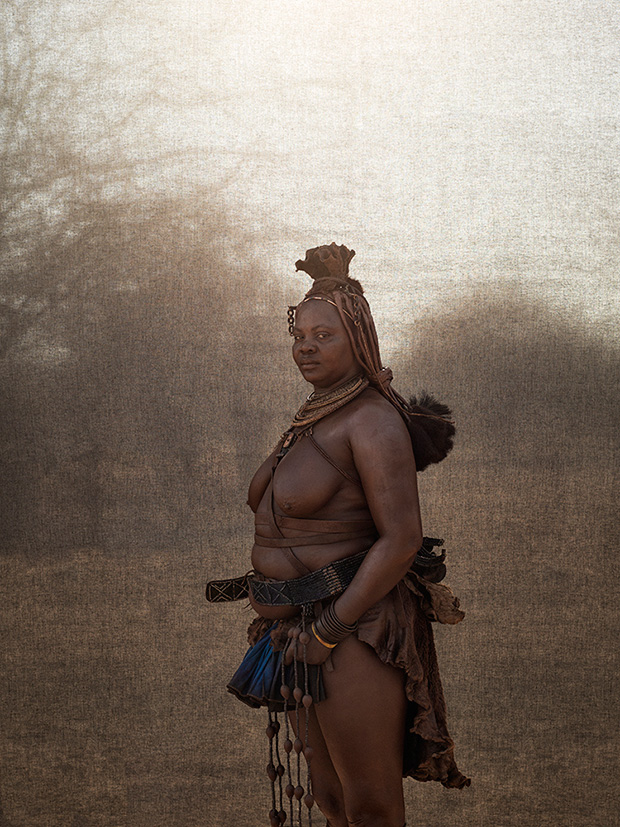 The images almost look like old master paintings- was this intentional?
“Well not really- I am a photographer, so I want my work to appear photographic, but I am influenced by the compositional values traditionally used in formal painted portraits. It is a device I have used in pretty much everything I’ve done, and because of the scale of my prints, and I think it works well graphically.

“I’ve always collected exotic postcards from last century, and although I realize the style is tainted somewhat from an ideological point of view, I find the graphic simplicity and the sense of ‘otherness’ that they confer quite compelling. I’m sure they’ll be a few critics who come out of their holes once this work is exhibited to accuse me of ‘exoticising’ these people in order to titillate people in the West, but nothing could be further from the truth.” 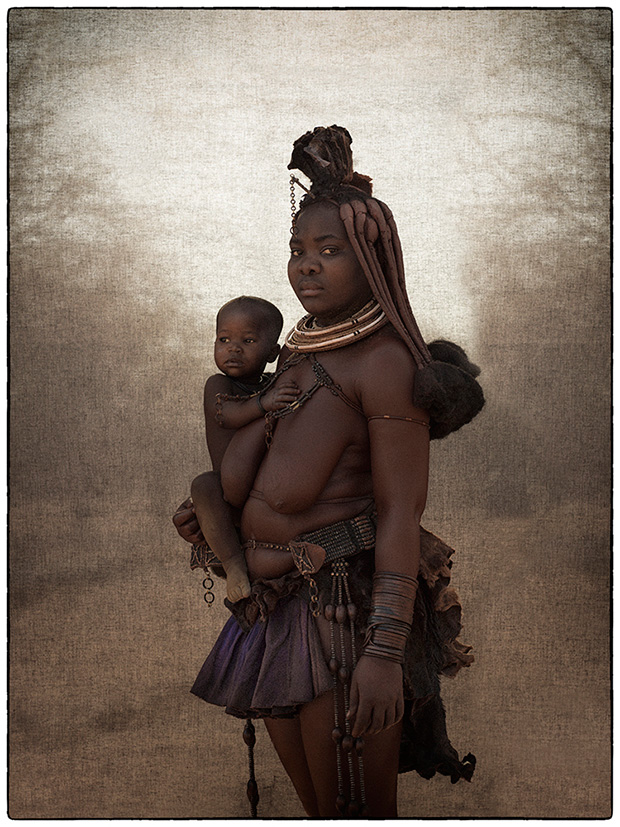 What is the background you are using? Did you add this in post-production?
“No, the background was not produced digitally. It is a large sheet of black fabric which is stretched over a frame and it becomes translucent when backlit. It is tricky to set up in the middle of nowhere, and I spent a lot of time trying to find rocks to weigh it down because even the slightest breeze turned it into a giant sail. It has to be stretched as perfectly as possible with no creases; it really is quite an effort, especially in the desert heat.

“I wanted to produce portraits that had a sense of place but also had that naturally lit, studio feel you associate with Seydou Keita’s work which I really admire. The background is still there to provide a sense of depth, but it is distorted and made less dominant by the effect of the fabric, so the viewer’s eye is drawn to the detail in the main subject. You mentioned old master paintings just before, and it was a common device used by artists back then, including by Da Vinci when he painted the Mona Lisa.” 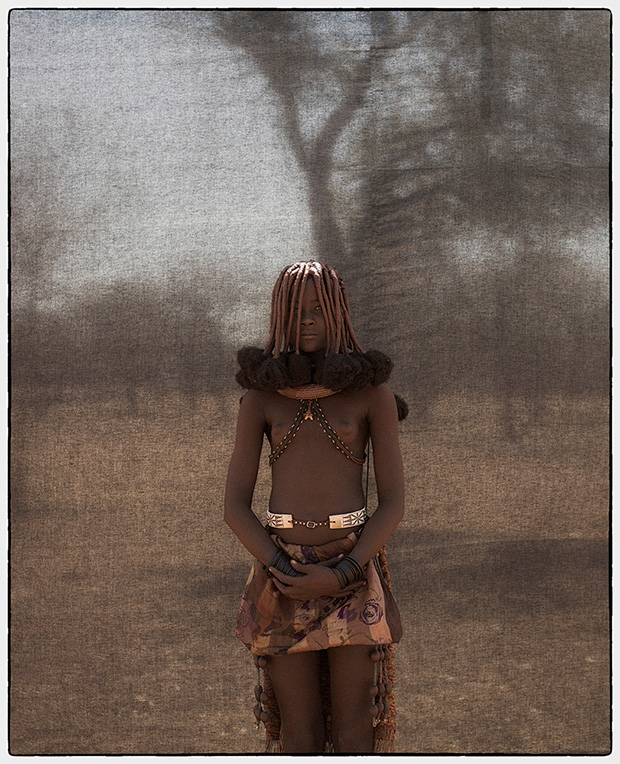 How difficult is it photographing people who are still essentially tribal?
“It isn’t as difficult as you may think and certainly the closer you are to an urban center, the more they understand what is required because they are regularly photographed by tourists who pass through. When you get out into the middle of the Kaokoveld, you encounter clans who have much less contact with Westerners but even they soon get the hang of what is required.

“Fortunately my guide spoke Ovahimba, so he could direct them to some extent; however, we didn’t pose them as such. They have an amazing natural sense of grace and posture. They really are just as regal as they appear in my photographs. All of the poses they have assumed are completely natural, which is why I love photographing them so much, because they lack the camera consciousness of people in the West which makes it much easier to capture their essence.” 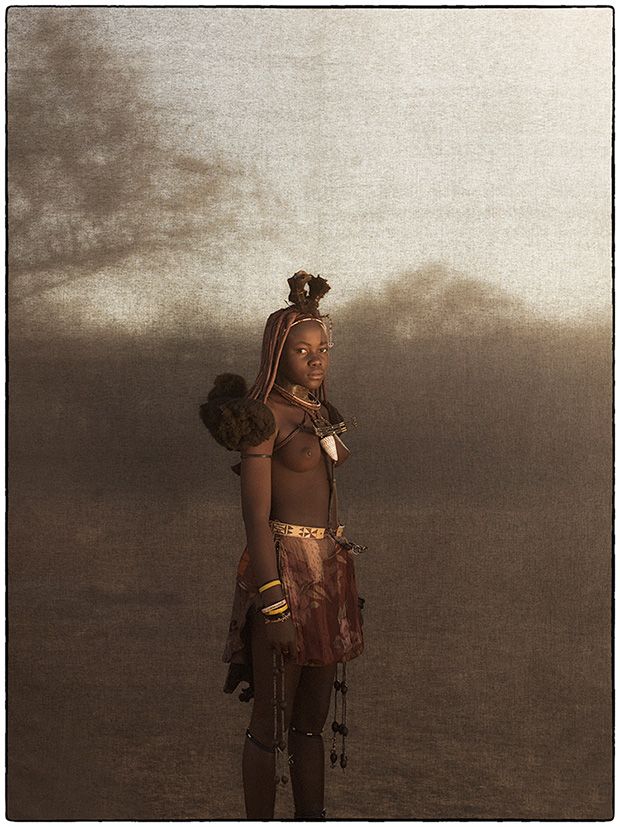 Do you find the Himba people inspiring?
“Yes, I do and not just as photographic subjects. I think they are really happy people and after finishing the first part of this project and returning to what we call ‘civilization’ I was struck by how miserable everyone seemed to be and how first world their problems were.

“I’m not idealistic regarding the world of the Himba but they do have something that we seem to have lost. Their lives are frugal and simple and they have a great sense of kinship with each other; their babies are cared for by the community, as are their old people. They have a rich inner life too. They make sense of their environment through their traditions and their stories. Practically everything they need in life is provided by the surrounding bushveld; you can’t fail to be impressed by that, but it’s their self-evident happiness that impresses me most of all.” 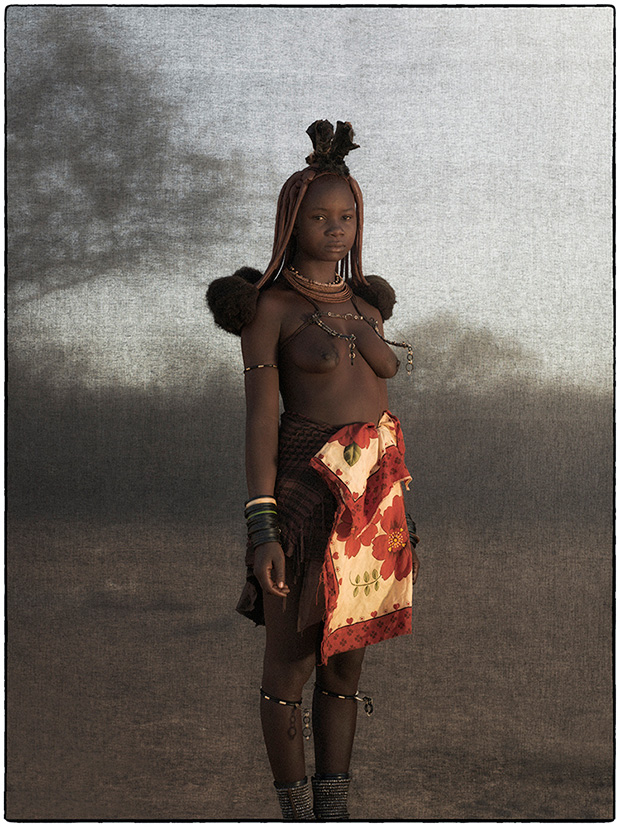 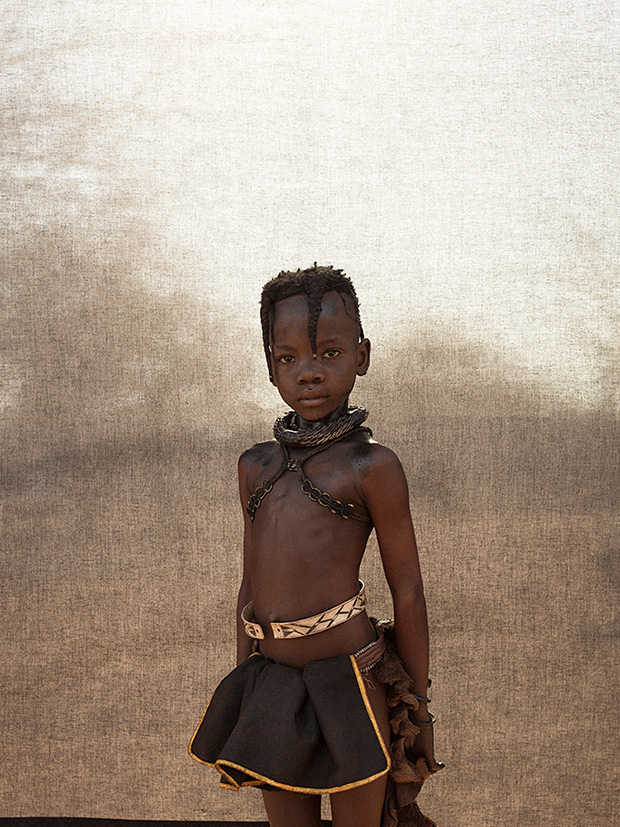