Inside the Lives of Bhutan’s Remote Semi-Nomadic Yak Herders 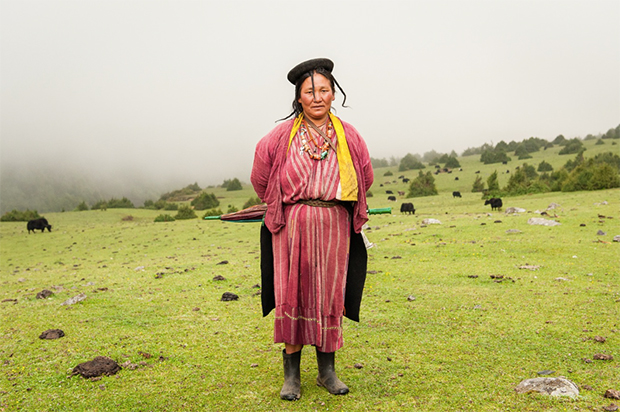 A Brokpa women in traditional clothes made from Yak hair and sheep’s wool. Their distinctive hat known as ‘tsipee cham’ is made of yak felt with long twisted tufts, said to prevent the rain from running into their faces. 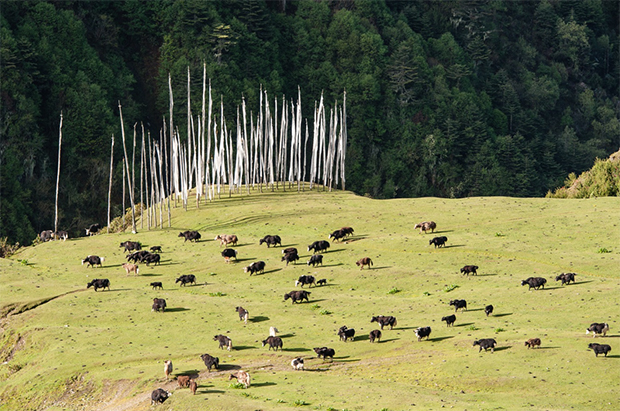 In search of fresh pasture land, the herders are constantly on the move.

In sequestered enclaves of Bhutan, British photographer AJ Heath sits in the tent belonging to a family of Brokpa tribesmen and women, who spend the summer months as nomads, seeking fresh pastures for their herds of yak and sheep.

He’s driven for days and hiked for hours to find them where they’ve settled in the Merak and Sakten villages, and as they serve him Ara, a warm beverage made from rice or wheat, he watches what might be some of the final days of centuries-old way of life.

The Brokpa villages have remained isolated from the larger currents of globalization shaping the country; it was only a few years ago, in 2012, that electricity was popularized. Television and internet came to Bhutan in 1999, and still the semi-nomadic tribe relies on their yaks for survival.

The animals provide food and warmth in an often unforgiving climate; they define a family’s wealth and status in a culture where trading and bargaining are commonplace. The Brokpa people also adhere to customs they have followed for generations; men and women both hold equal power within a family unit, and it is not rare for a woman to take multiple husbands.

Life for the villagers is difficult, and they are plagued by monsoons and other unpredictable weather events. “I can’t imagine what it must be like in winter,” says Heath of his stay in the harsh environment.

The introduction of a new roadway promises to make daily life easier, relieving some of the pressure from the people and their animals. Still, Heath wonders whether this connective thread to the outside world threatens all the Brokpa have built over hundreds of years.

Heath’s series End of the Road presents these villages not simply as a thread that connects us to age-old customs; these spaces and these lives are fragile, precarious, and on the verge of unforeseeable change. 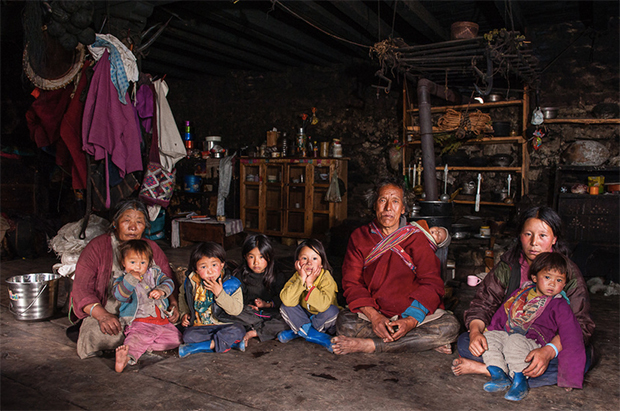 Low living standards, lack of alternative job opportunities, and unhappiness is contributing to increased urban migration. This is particularly seen in the younger generations and results in the loss of the communities’ vitality and values. 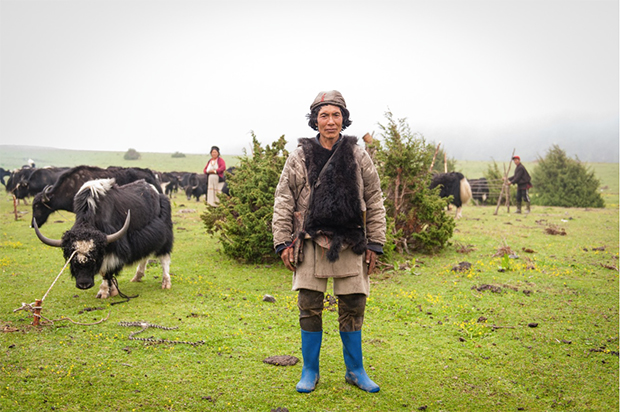 A herder wearing a jerkin made of yak hide for extra warmth. 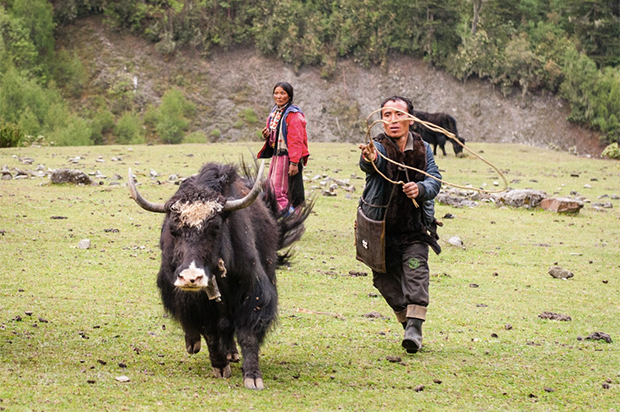 Yak are tethered at night near the campsite to protect them from attack by predators and to have the cows ready for milking in the morning. 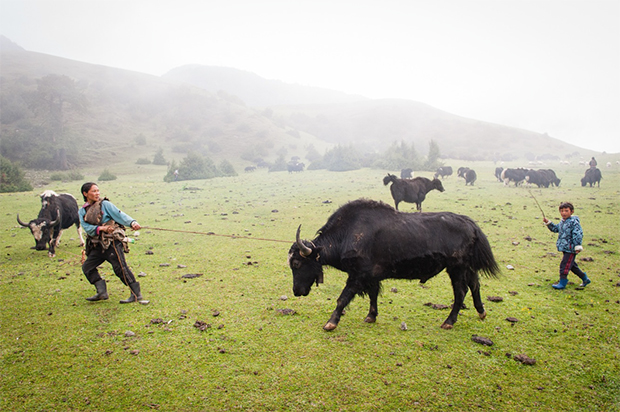 Women command a high degree of respect from their husbands and children and often function as the head of the family. They are pivotal in deciding such matters as marriage of their children, when to migrate and in taking charge of the family finance. 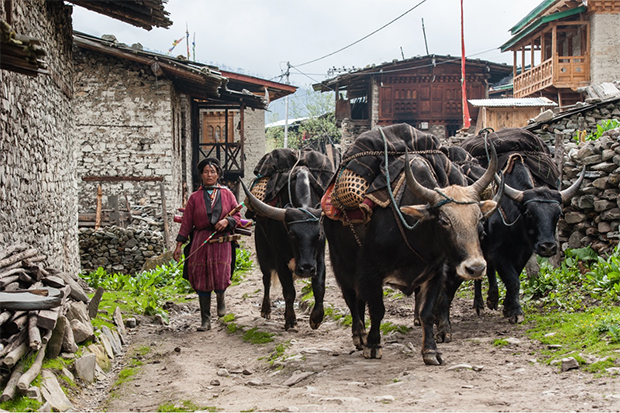 The Brokpa way of life hasn’t changed in centres, but with the introduction of the first road, will they continue to rely on their yak as much as they have in the past? 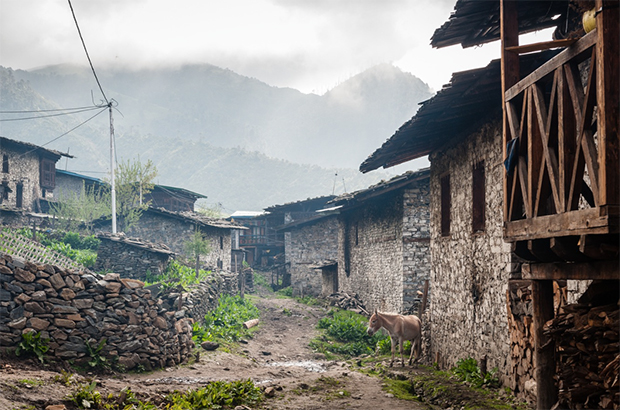 Merak village which lies at 3,500m above sea level, has a population of 1,908 and 213 dwellings. Electricity to the village was only introduced in 2012. 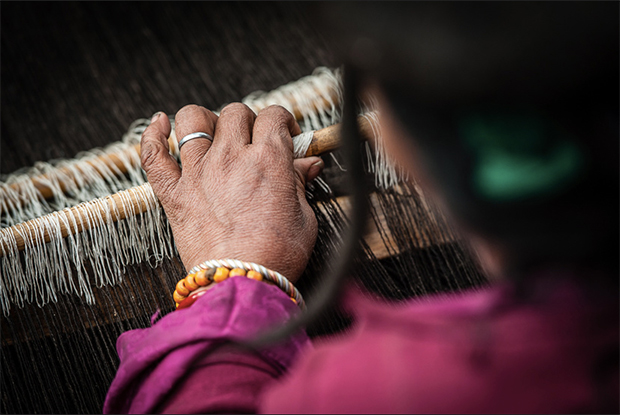 Sonam carefully weaves the yak yarn into a blanket for the winter months. 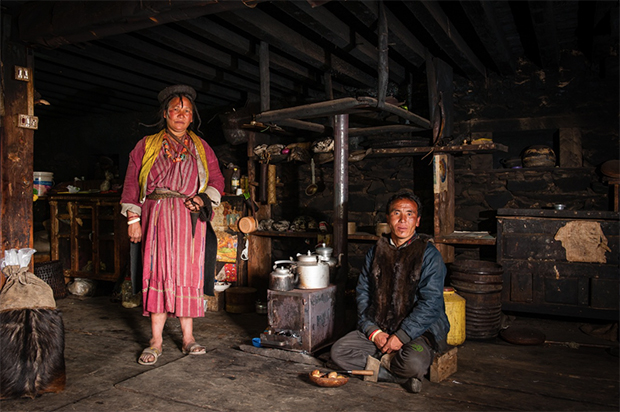 Polyandry is often practiced in these communities. A woman can be married to more than one man at the same time. Sometimes the co-husbands are brothers to prevent their ancestral land being partitioned overtime. By using this system a family can pool its resources – one husband can be away on a trading mission whilst the other is able to help tend to the yaks at home. 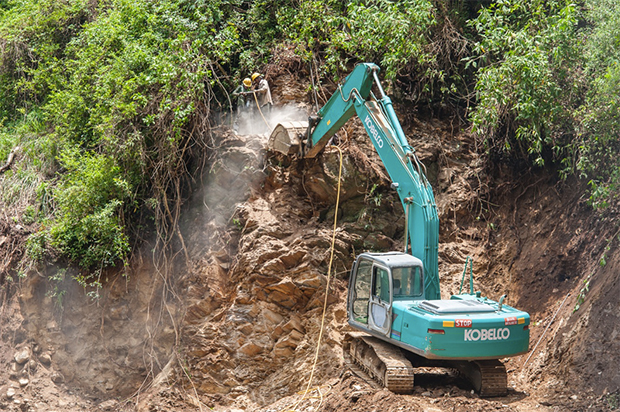 The tranquil peace of the Sakteng Wildlife Sanctuary is shattered by the sound of heavy machinery, as diggers cut a new road into the mountainside. As Bhutan’s development accelerates, its government and people have engaged in a new battle to preserve its culture and keep its unique identity alive. 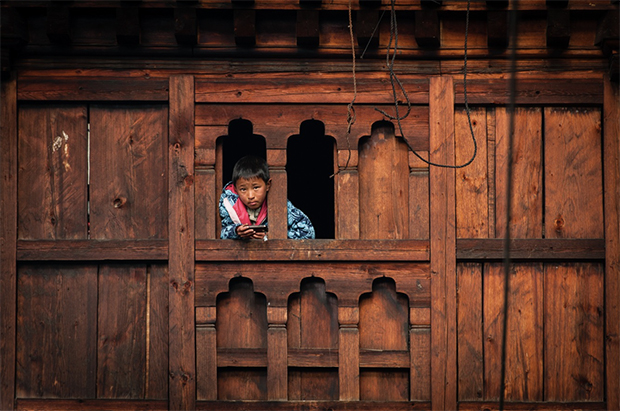 A 21st Century problem -A young boy hangs out of a window searching for better mobile phone reception. 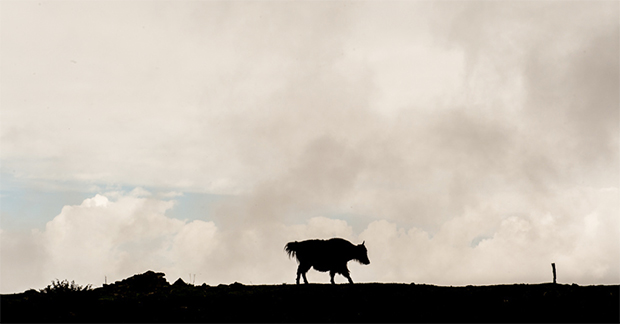 Wealth within the Brokpa society is assessed on the heads of livestock. For example, a wealthy Brokpa may have 150 to 180 yaks in addition to other animals such as horses and sheep. The middle class Brokpa may own 20 to 50 yaks, while the poorest may own as few as two or none. 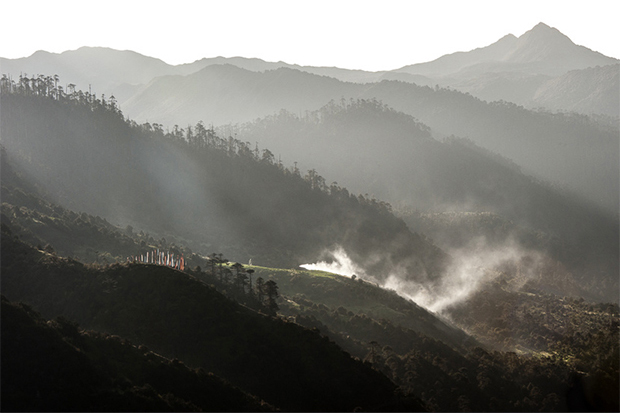 Smoke from a Brokpa yak herder’s fire drifts into the early morning air. It is a 4-5 hour hike to the nearest road and the Brokpa rely heavily on their yak.