An Intimate Look at the Plight of Thousands of Refugees Stranded in Lesbos, Greece 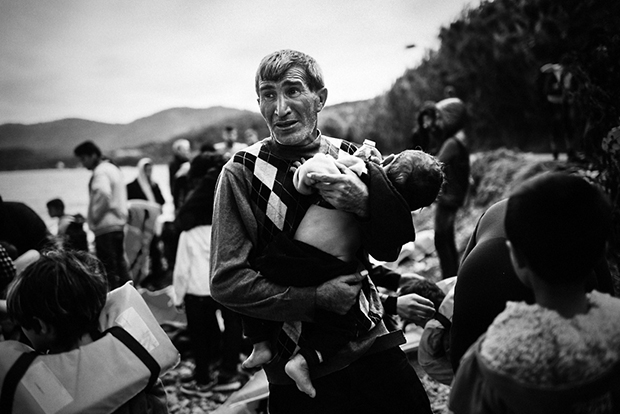 The crossing across the Aegean is notoriously perilous. This man just arrived with his family at Lesbos island, scared and happy at the same time. 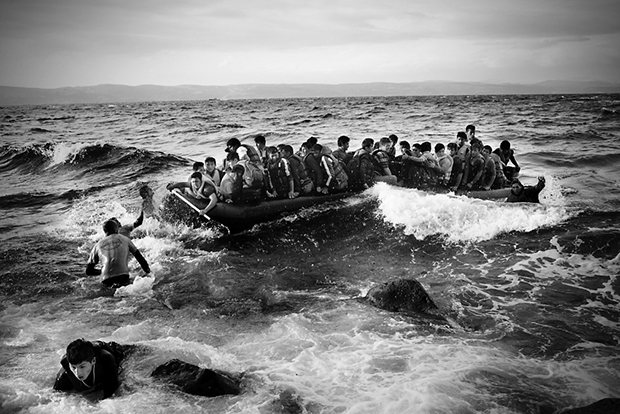 A boat with 45 refugees from Afghanistan reaches the north coast of Lesbos. The swell is high and the journey dangerous. Spanish life guards help people off the boat. 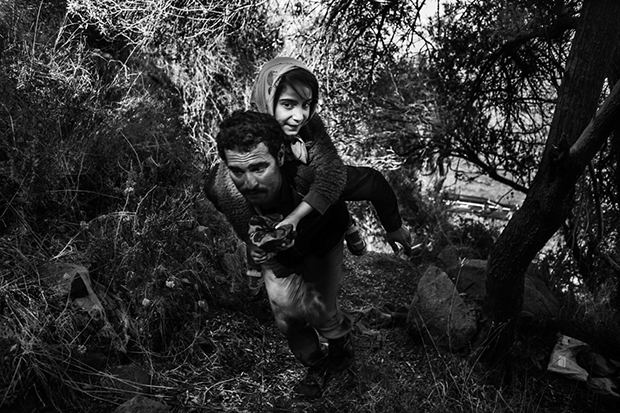 A refugee climbs up to a field with his daughter after arriving from Turkey to Lesbos island, Greece, on a dinghy. They have to walk around 55 kilometers (34 miles) to reach the capital of Lesbos, Mytilini.

When German photographer Kai Löffelbein touched down on the island of Lesbos early this fall, where as many as two to four thousand refugees come ashore on a single day, he was forced in many ways to be a human being first and a photographer second. He still remembers clearly the time he set down his camera to take hold of a baby—just a few months old—wailing for his mother, who was out of sight. As people made their way up the steep incline and onto the shore, he raced through the crowd until at last he discovered the mother, who sat entranced in sheer bewilderment at the turmoil that lay before her.

Refugees reach Lesbos after a terrifying and life-threatening journey from the coast of Turkey, where they are handled by armed smugglers who send them on their way through the turbulent seas, aboard a boat or dinghy filled beyond capacity. Engines are unreliable, and a large percentage of the passengers are unable to swim on their own, strapped in life jackets or worse, safety contraptions similar to water wings used by children.

Depending on the conditions, anywhere from several boat-fulls to hundreds upon hundreds of men, women, and children struggle to make their way up the arduous rocks and onto safe ground. Once there, individuals and families erupt into song, screams of relief, and uncontrolled bellows of joy. They call the family members they’ve left behind; they let the tears roll freely. Sadly, the reprieve from fear and doubt is often short-lived, suggests Löffelbein, when the refugees take in their perilous surroundings.

The fate of the refugees on Lesbos, stresses the photographer, changes weekly. Where he anticipated an abundance humanitarian aid, he found mostly grassroots organizations and volunteers who, despite their best efforts, were often unable to contain the situation. With time, citizens from around the globe have stepped in and gradually found their footing with practice, offering medical assistance as well as transportation to the camps at Moria, where they register for transit papers.

It’s still not enough. The camp itself, explains Löffelbein, at least during the time he was there, seemed ungoverned and chaotic. Without oversight, the refugees were forced to live in repurposed military barracks, without no place to sleep and very little to eat. There is not enough space on the ferries that travel to Athens, and registration itself took far too long, meaning that the camp itself began to resemble what the photographer describes as “a grim prison.” Fights occurred frequently between the detainees, and law enforcement reacted most often by force, using tear gas to subdue the desperate individuals.

Again and again, in response to the dire conditions, Löffelbein was asked by refugees, “Is this Europe?” In the midst of such a traumatic event, he admits that the role of the photographer can be murky and ambiguous. When journalists enter into environments like these, working with the utmost humility and compassion is critical. Having too many photographers at the scene, says Löffelbein, “never helps the situation.” And still, photojournalism continues to play an essential role in allaying the crisis.

When asked about other photographers addressing the same subject, Löffelbein says simply, “I have to admit that I don’t care if there are other pictures or smarter approaches already out there.” Ultimately, the most meaningful photographs are those that come from the most straightforward and most empathetic place, and when it comes to subjects like this one, the photographer understands that there can never be enough awareness. His most earnest goal, he elaborates, is to make it impossible for anyone to say of the crisis, “Sorry, I haven’t heard about it.” 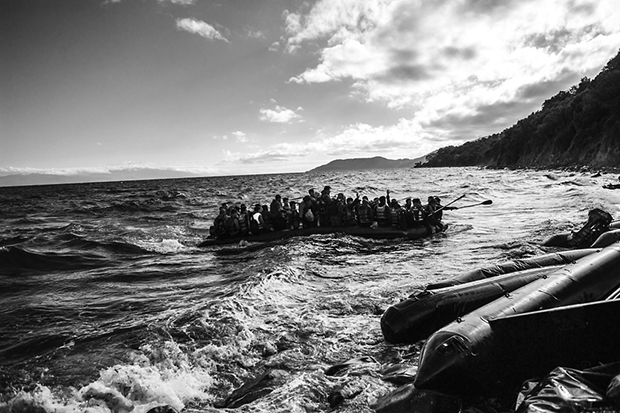 Migrants arrive on a dinghy after crossing from Turkey to Lesbos. Greece has been overwhelmed this year by record numbers of migrants. More than 250,000 people have reached Greece so far this year, the vast majority of them Syrians or Afghans fleeing conflict. 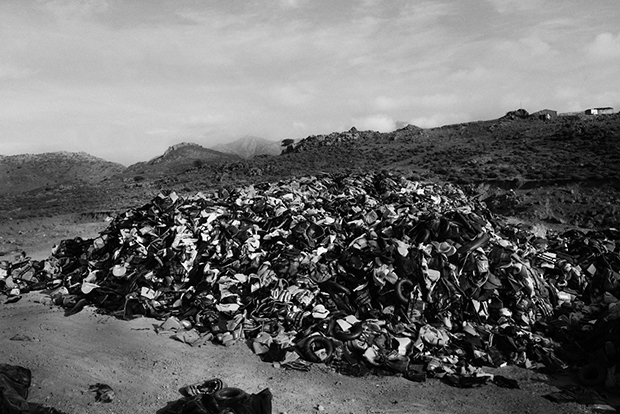 A more than 12ft high pile of life-jackets and dinghies, left behind by migrants and refugees that have successfully made the hazardous journey across the Mediterranean to the Greek island of Lesbos. 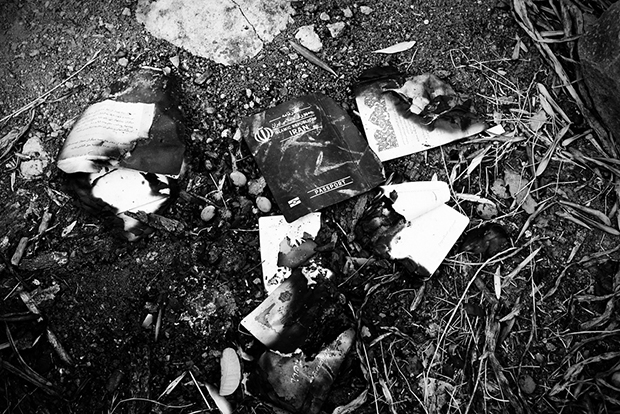 Iranian refugees burned their passports before arriving in Athens. 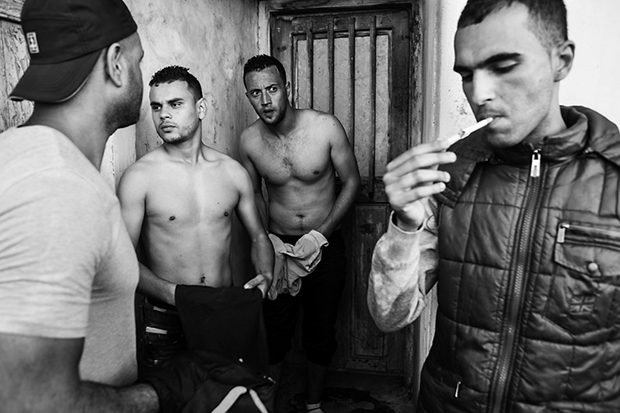 Refugees change their wet clothes while a police car drives past. 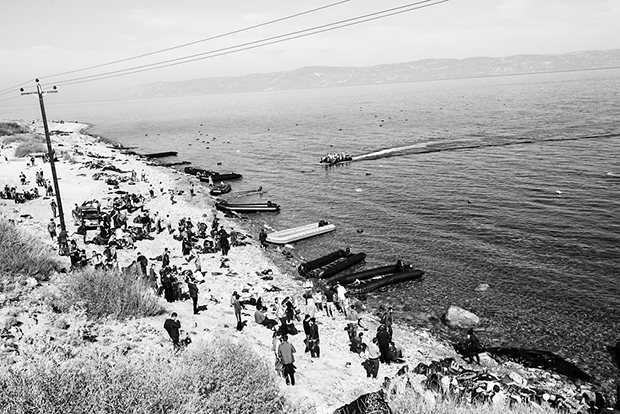 Refugees arrive on a dinghy from Turkey to Lesbos, Greece. 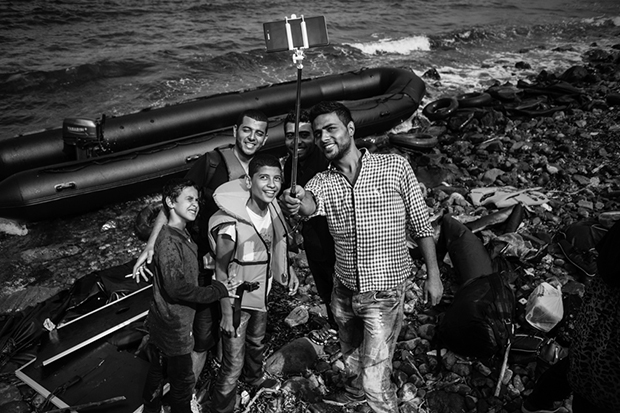 A group of young men pose for a selfie on Eftalou beach after reaching the island. 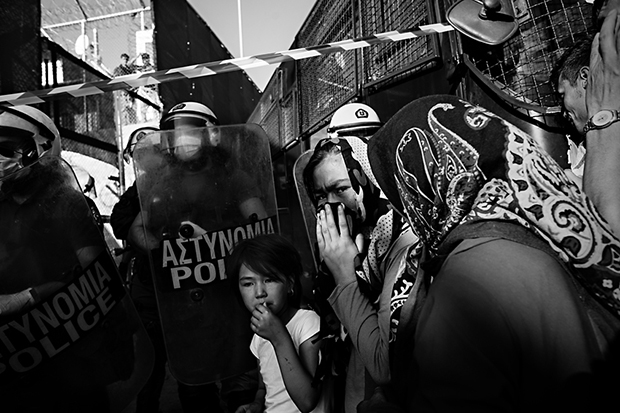 Greek police forces use tear gas on refugees several times as they protest against the living conditions at the camp in Moria as well as the long waiting hours at the camp`s office for registration. 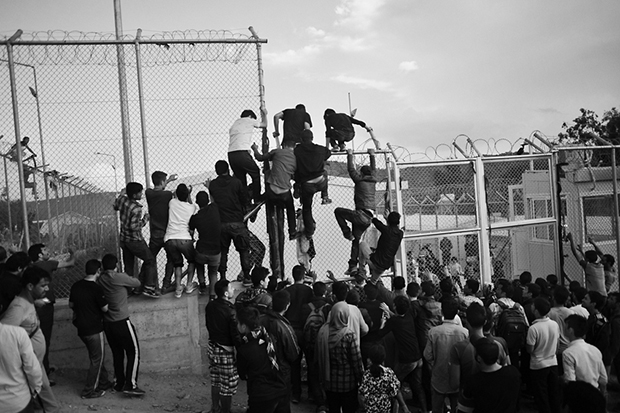 Hundreds of refugees wait for their registration in Moria, Lesbos as the police start to use tear gas because of riots between people from Iraq and Afghansitan. Chaotic registration queues leave refugees under inhumane conditions for days. Here, they start to climb the fences and try to enter the registration point. 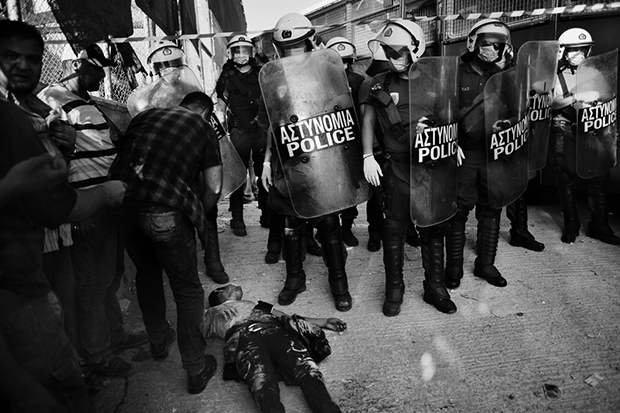 Greek police forces use tear gas on refugees as they protest against the living conditions at the camp. 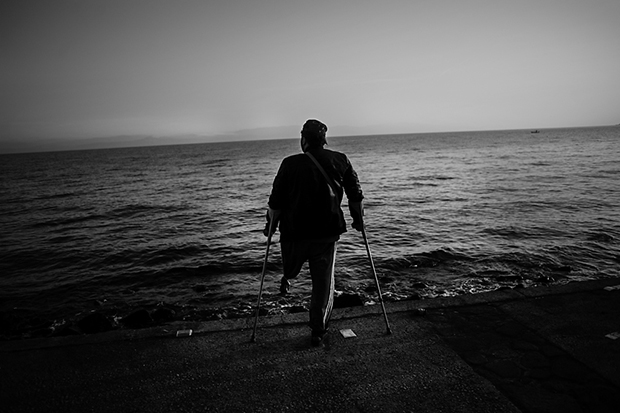 A disabled veteran stands at the beach of Lesbos. 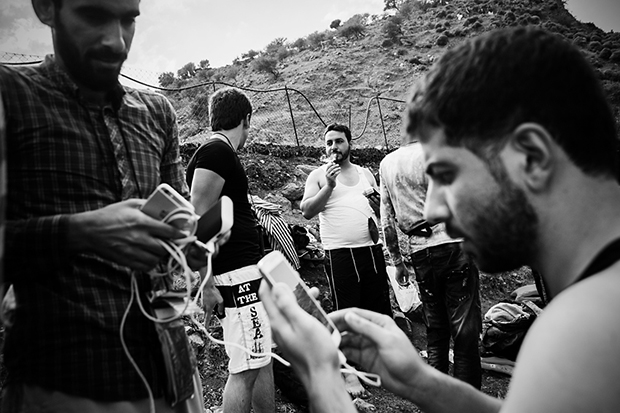 Refugee arrive on the shores of the Greek island of Lesbos after crossing the Aegean sea from Turkey. Now they are calling their relatives and friends. 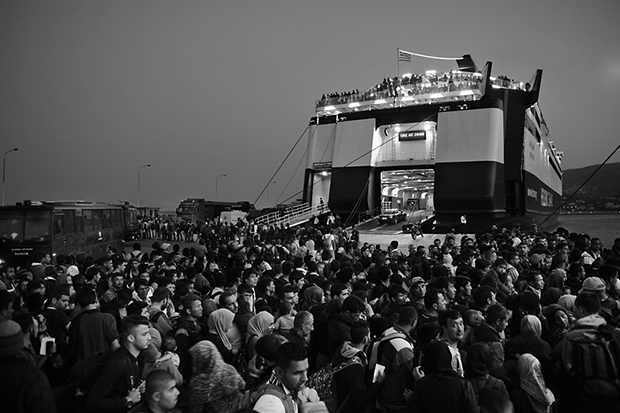 Thousands of refugees gather at the port to enter the ferry to Athens. Afghan and Syrian refugees who successfully entered Europe by the sea from Turkey to Lesbos, Greece, continue their journey. A majority of them are trying to find refuge in Germany. 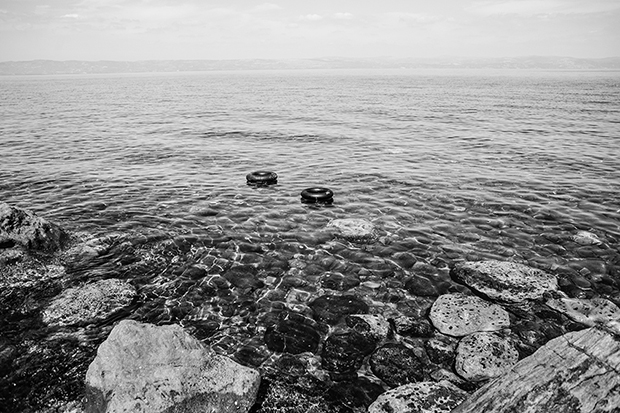