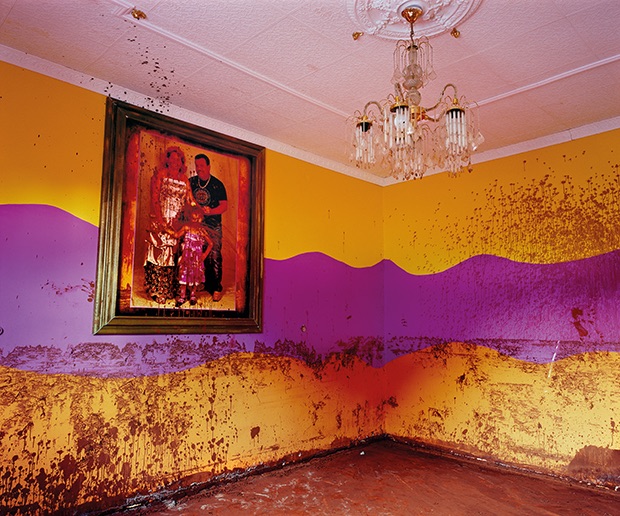 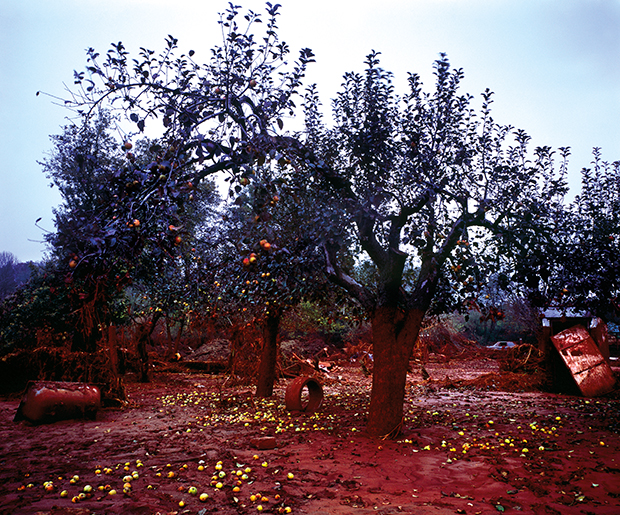 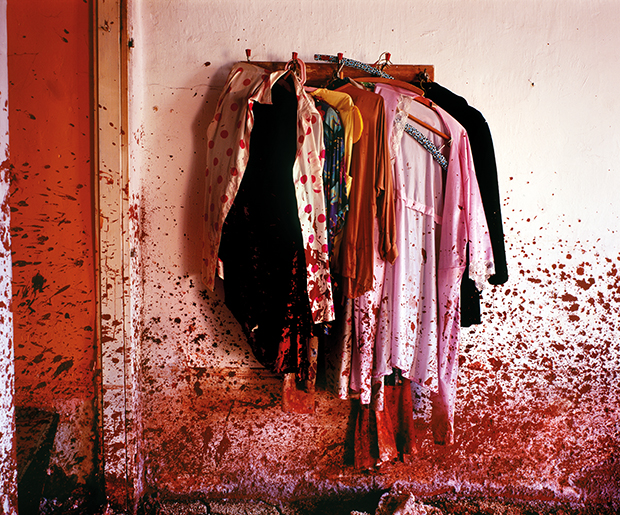 As with all major national disasters, the Ajka alumina plant spill in Hungary was extensively photographed. The incident was politically complex, emotionally charged, and visually stunning, attracting reporters and photographers to the site where a million cubic meters of toxic red sludge had devastated the Hungarian landscape. Helicopters hovered overhead to capture surreal aerial shots and mud-drenched animals were photographed dead in the streets, but of all the images taken during the flood and in its wake, Peter Kollanyi’s stand out.

Recently published by The Robert Capa Contemporary Photography Center, Kollanyi’s book Memento focuses on the quiet aftermath of the disaster. Many of the photos at first resemble gruesome, exaggerated crime scenes— images of red-splattered walls and an abandoned tricycle are like something out of The Shining—yet the serene pink and golden glow illuminating the pictures creates a hauntingly peaceful effect of a post-apocalyptic landscape seen through the eyes of a lonely witness. Beyond the historical significance and documentary value of the images, the lasting intrigue of this work lies in the emotional tension between the harrowing subject matter and the equally arresting and aesthetic manner in which it’s captured. With Memento, Kollanyi has not simply documented a disaster, but rather carefully represented its victims through the traces of their fading presence.

Memento opens up with a poem by Péter Nádas that recalls the devastation of the toxic spill. What do you feel a poem conveys about the tone and narrative of these pictures that something like a prose introduction would not?
“Prose would be far too rational to depict this catastrophe. People were busy doing their daily business when out of nowhere a 2 meter high flood appeared and swallowed their life. “A Sedimental Glossary” is a free verse poem, with a unique visual structure aiming to depict this chaos – in which even words lose their original meaning – of the catastrophe. Prose may have delivered the risk of indifference, whereas poem works on the emotions just like photography.” 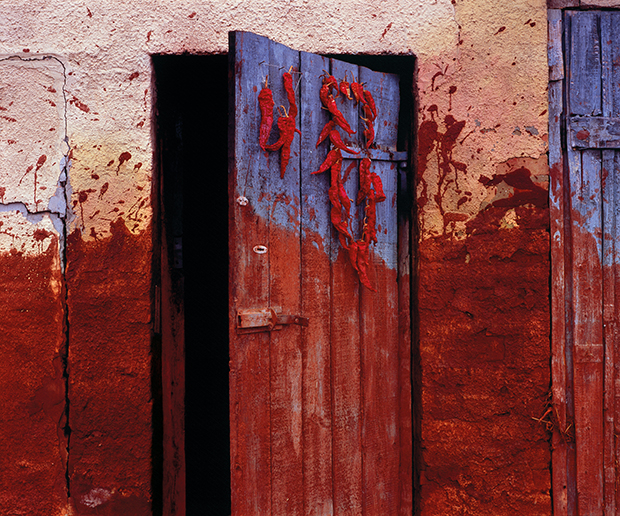 When approaching this project, what issues of documentation were you wary of? What do you feel your role as a photographer is (and is not) in these sensitive situations?
“Every topic is sensitive in its own way. In Memento the most challenging part was not the communication with the victims, but with the viewers who had already been bombarded with a certain approach by news channels. My role as a photographer was to provide a less sensational, yet more human point of view. The intention was to focus not on the destruction but on the people who had lived there. Their personal belonging take us back to their pre-catastrophe life.” 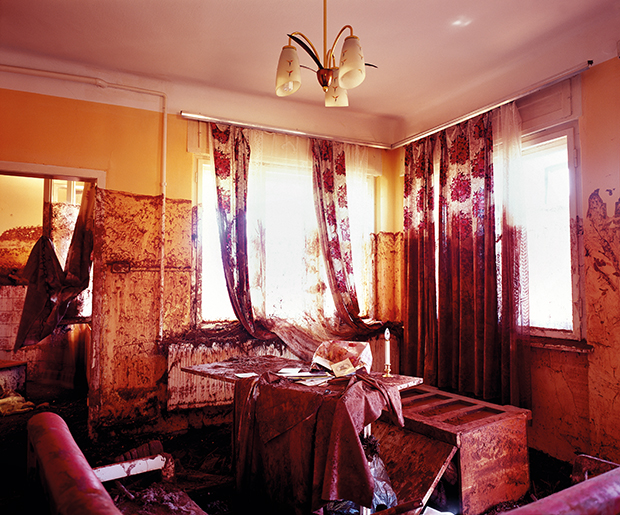 On a related note, do you ever feel that there is a tension or conflict of interest between your roles as a journalist and your position as an artist? Or do those two identities blend harmoniously when you are working?
“In Hungary, being a small country, photographers tend to wear multiple hats. You can be a staff photographer and artist so you’ve got to be able to switch between these two roles. It’s like when novelists work as freelance journalists. I am convinced that magazines and readers benefit a lot when artist-writers or artist-photographers publish in press. Many times documentary photographers start working when journalists finish. It was the same with Memento. I arrived to the area when press photographers had already left, days after the catastrophe. I remember wandering around the deserted villages without meeting anyone for long time. It was a bit eerie.” 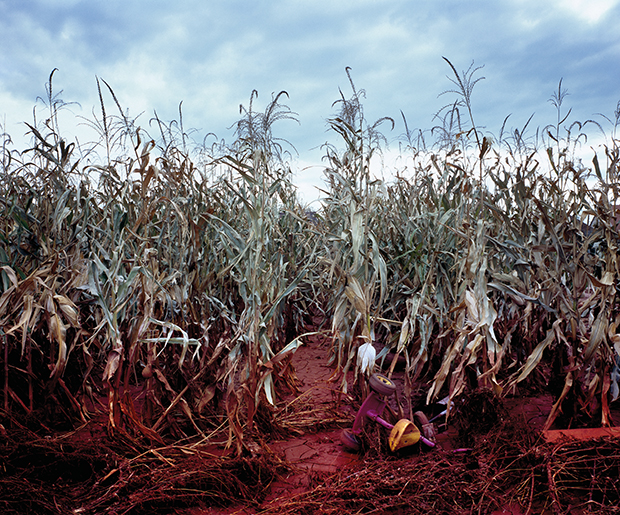 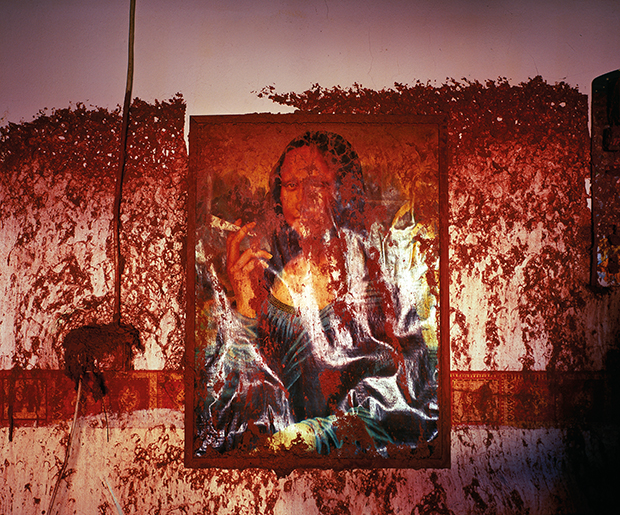 What is your relationship to these villages in Hungary? Was it the event of the flood and the opportunity to photograph it that ultimately led you to that particular area?
“I haven’t lived in that specific area, but these villages have a very similar look in Central Europe. In this sense, these photographs could’ve been taken anywhere else in the region. Having said that, Memento is not only focusing on the red mud disaster. I aimed to create a wider understanding of passing human existence through catastrophes.”

Several of your projects, such as The Csangos and now your book Memento, deal with themes of abandonment and isolation, and particularly the effects that a large-scale human exodus has on both an environmental and societal landscape. Could you talk a bit about your attraction to this subject and why you return to it?
“Not particularly the abandonment interests me, but those moments when people going through radical life changing situations. It’s always a very complex time and interesting to photograph – when something finishes and a new thing starts. The sorrow of wither and insecurity of the future creates special beauty, and photography is a great form of art to depict this. While Memento is about abandonment caused by a catastrophe, Csangos is about communal solitude as a result of ending a community’s cultural isolation. Young people give up traditions, move to large cities and all their elders are left with is loneliness. This is a very current issue in Europe.” 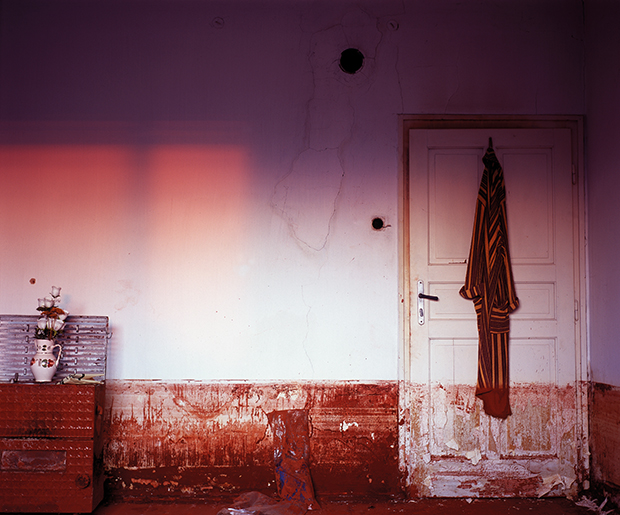 It appears as though you used a large format camera for this project. If this is the case, how did that process affect the way you approached and thought through each picture, considering that it is a bit slower and more laborious than other formats?
“I usually use medium or large format positive films. I plan each shot carefully days – or weeks, month even – before I photograph my projects. For me taking photographs is finding the pictures around me that I imagined. There is a bit of spontaneity in it too, of course but careful planning is crucial. The searching process can be very slow, therefore large format photography is an ideal tool which gives me the perfect freedom in this. It also allows me to exclusively concentrate on my thoughts and my environment and nothing else.”