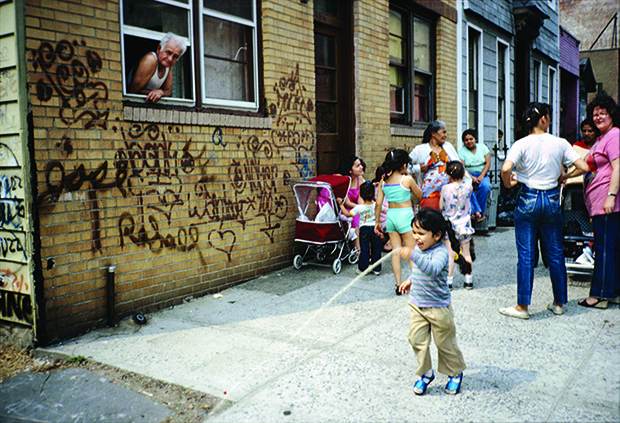 Meryl Meisler: In June of 1983, I photographed what appeared to be an extended family and neighbors hanging out in front of a small brick apartment house on Palmetto Street in the Bushwick section of Brooklyn. It was a building I walked past nearly every day on my way to and from school. The light ochre bricks of the façade are graffiti covered with brown and black spray paint of names like Jose, Rafael and other tags. A woman sits with her carriage and toddlers on the stoop. An older woman looks towards younger women with their carriages and toddlers. A woman sitting on a garbage can looks towards the direction of the camera. A white haired man wearing T-shirt peers out of the ground floor window, stares directly at the camera lens. There’s a little girl in the foreground joyfully on her tippy toes tossing one end of a jump rope, the jumper and other person turning the rope are out of view. A young dark hair pony tailed girl, wearing a blue halter tope and shorts, has her back to the camera, she’s looking toward the grandmotherly figure. More people in the adjacent building peer towards the camera. It looks like a happy scene.

I printed and exhibited that work for the first time ever in December 2011 for my solo show “Bushwick In The 80s” at Soho Photo gallery. It reminded me of a friend’s building in Soho.

In February 2012, I received an email from a woman who saw the image in an online review of the exhibit. She, Vanessa Mártir, was the little girl at age 7 in the blue shorts whose back was to the camera. That was her extended family and neighbors on the street.

The little girl in the blue shorts, Vanessa, grew up to become a writer and was working on her memoir about growing up in Bushwick and had just finished writing a chapter about the white haired man hanging out the window, the man who repeatedly molested her as a child.

Vanessa and I decided to meet. We connected immediately, something special in the universe brought us together. My photographs depicted her childhood. Her stories brought voice to my photos. We knew on the spot we wanted to collaborate, exhibit my photographs with her stories. Just as miraculously, we answered a call for a new Bushwick gallery looking for underrepresented artists interested in education and community – The Living Gallery. The gallerist Nyssa Frank immediately agreed to give us a show, the first for her gallery, opening June 2012 for Bushwick Open Studios. Our exhibit, “Defying Devastation: Bushwick In The 80s” received rave reviews, most notably from Holland Cotter in The New York Times.

A friendship was forged, and we collaborated on a 2nd show “Bushwick Then & Now” at The Living Gallery in 2013. We’ve encouraged each other’s book and personal projects. Her essays are included in A Tale of Two Cities: Disco Era Bushwick and she performed at the opening reception for Purgatory & Paradise: SASSY ‘70s Suburbia & The City. My photos have accompanied several of her published essays, include some that refer to the Jump Rope photograph, published here and here.

We will collaborate again in the future, that is for sure.

The universe, and a photograph, brought Vanessa and I together. It changed both our lives and work for the better, and forged a solid friendship. Vanessa’s work with memoir helped me realize my photography is memoir. The power of that photograph reinforced my own belief in the spiritual nature of photography. For a split second in time, a photographer’s and “subject’s” paths cross and connect with a click, a passing moment that inherently effects both their lives and communicates a message, a small voice, to the world. 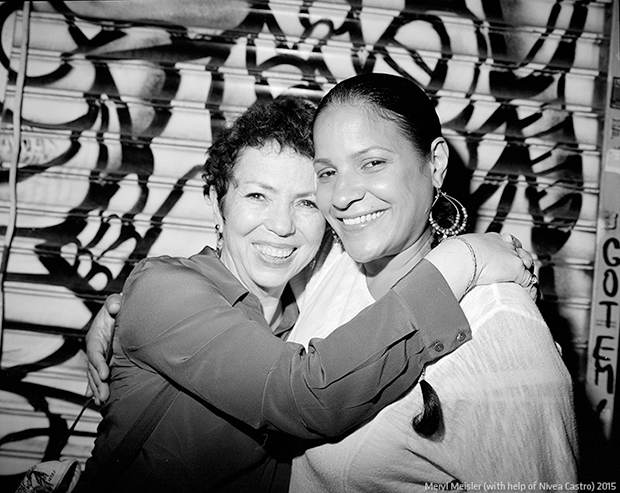 Portrait of the artist with Vanessa Mártir