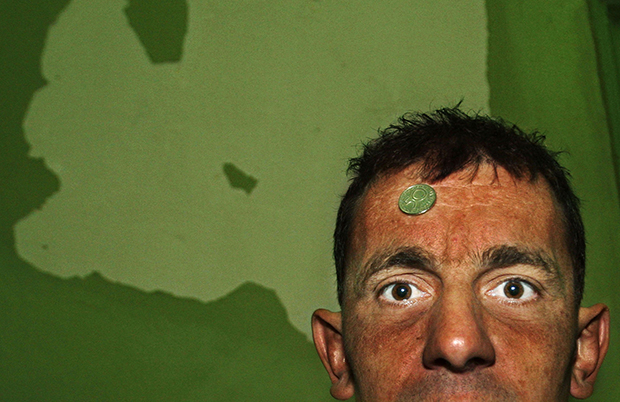 A patient slams a Bulgarian coin on his forehead and says, “Money controls everything. Money is why I am here. Money is why I will never get out. We have no voice here; only money speaks,” in the psychiatry ward of a county hospital in Bulgaria on August 10, 2006. © Yana Paskova

We asked photojournalist Yana Paskova to describe the most important photo she’s ever taken. This was her response.

Yana Paskova: I think “ever” rarely exists, especially in the field of photojournalism, and the arts in general – and importance is quite relative. Is the photo important because it taught you something? Did it mean much to you or to its observers? Did it exert a great influence over your career? Or is it simply beautiful and meaningful? The picture a photographer considers singularly most significant at any point in his/her career will hopefully accumulate some competition within 5 years. I believe a more relevant way to evaluate impact is to look at photo projects. For me, the stories I shot on mental health in my homeland, Bulgaria, and then on American politics on the presidential campaign trail at the start of my career in the mid- to late-2000s were quite influential to my vision then – the former taught me how to access people’s lives effectively but respectfully, and the latter, how to use visual metaphors in illustrating complicated issues, and how to seek out beauty in the mundane. Of greatest import recently have been my projects in Bulgaria, once more, and also Cuba, on the intersection of democracy and communism – important because of how personal this issue is to me, having grown up in a communist country, and also because of the challenge (that I enjoy and welcome) of finding a unique voice in my stories when photographing a place of much news coverage (Cuba as one example, with more to come).