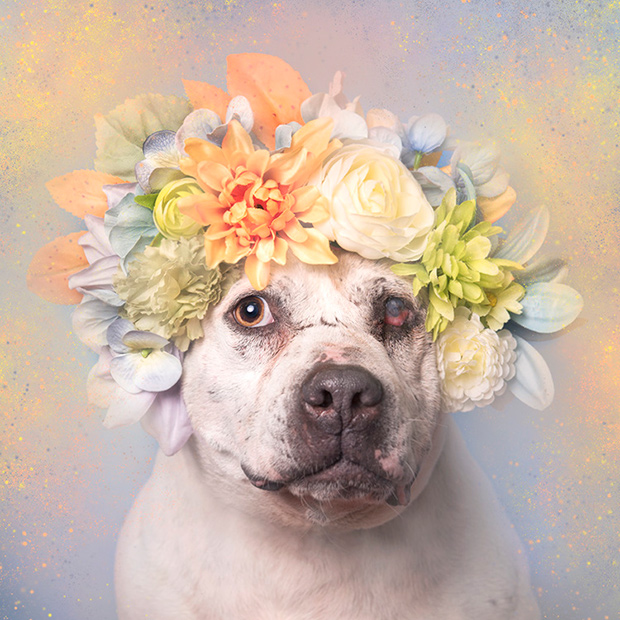 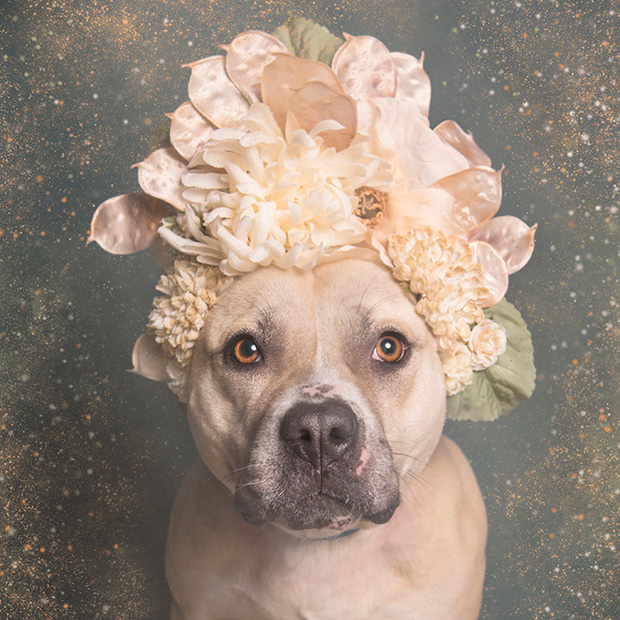 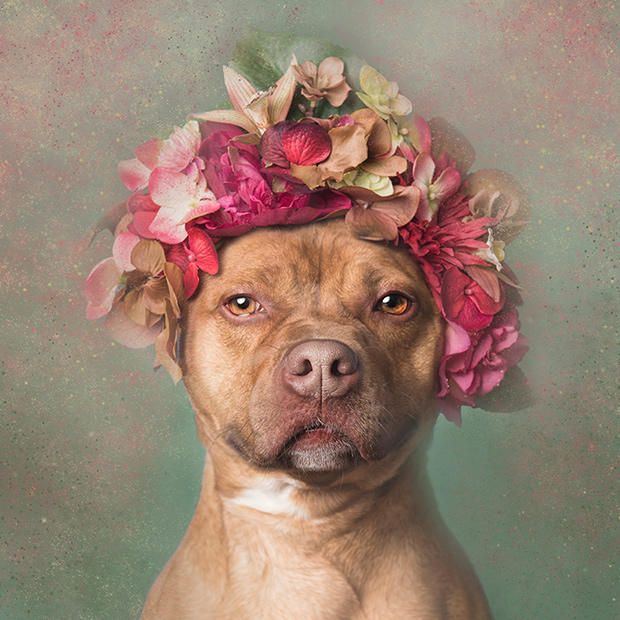 Murdock, says New York-based photographer Sophie Gamand, who has been making portraits of pit bull type dogs over the last year, is “the sweetest dog.” Like some other pit bulls who ultimately wind up homeless and in shelters, Murdock was abused at a dog fighting ring, where he was used as a “bait dog” to test the fighting strength of other dogs. His mouth was likely taped shut so that he was unable to defend himself, and he survived the ordeal with one blind eye and numerous wounds. Despite the cruelty of his past, Murdock was and continues to be deeply loved by the shelter staffers who care for him. Pit bulls like Murdock are what drives Gamand to continue to fight against the stigma that often surrounds them with her series Pit Bull Flower Power, for which she has photographed over one hundred dogs cloaked in handmade crowns of blossoms.

Although the rosy images certainly inspire smiles, Gamand stresses that their message is a serious one. Because of both the stereotypes surrounding pit bulls and the fact that they are often bred and then discarded by careless owners, dogs who fall into the broad category of “pit bull type dogs” account for an astonishing percentage of homeless animals. More than one million pit bull type dogs are put to sleep each year, and only one in six hundred finds a forever home. In the United States, notes the photographer, a pit bull is euthanized approximately every thirty seconds. In her own words, it’s “the quiet massacre.” All the dogs in Flower Power were photographed in shelters and rescues, and the flower crowns, which the photographer makes herself, harken back to Late Baroque painting. They’re symbolic, she explains, of the vulnerability of the animals and of the poignancy of their current situations. “It’s about what was lost,” says the artist.

But what’s lost can also be found. These dogs, many of them fearful but all of them tender-hearted, are waiting for their second chance. Portraits from Flower Power, in some cases, have directly led to adoptions and forever homes for their subjects. For all the ways in which mankind has wronged pit bulls, we can make amends. Gamand stresses the importance of spaying and neutering all dogs and of choosing adoption over shopping for dogs; no dog, she suggests, can be judged based on the way he or she looks. When she began the project, she experienced her own doubts about being around pit bulls, but seeing them for herself has undone years of bad press. After eight months of being confined to a cage and kept as evidence in an ongoing court case against his owner, Murdock was finally allowed outside to play, and since that day, he has been showering all he meets with kisses and affection.

What makes pit bulls special, notes Gamand, is their loyal and loving disposition and their “achingly human” faces; she adds that as social and active creatures, “they are not meant to be locked up in a cage all day long.” Today, Gamand opens her Flower Power exhibition at Gallery Adrien / Kavachnina in Paris, where pit bulls are banned and police are able to confiscate dogs who have the look of a pit bull. The Flower Power initiative, notes the photographer, “is not just about pit bulls, it’s also about our humanity and what we do to animals.” Dogs like Murdock, she says, deserve to know what it means to be loved.

Sophie Gamand celebrates the opening of her exhibition tonight at 6 PM, and the show will run until October 12th. Many of the dogs featured in Flower Power, including Adrienne, who is a part of our Flora and Fauna show at Photoville and Murdock, are still available for adoption. Adrienne, Murdock, and others in Flower Power were photographed at the Town of Hempstead animal shelter, where Adrienne is still waiting to be adopted. Murdock is now at Last Hope Animal Rescue and Rehabilitation and can be tracked via the Adopt Murdock Facebook page. Please consider adopting or donating to Hempstead, Last Hope, or a shelter of your choosing.

Flower Power calendars, prints, and other products are available for purchase, and Gamand regularly updates her Instagram with information about the project and the dogs via the #PitBullFlowerPower campaign. Gamand has also developed a set of tips for photographing shelter animals; a great photo, she says, often leads to a forever home. Find them here. 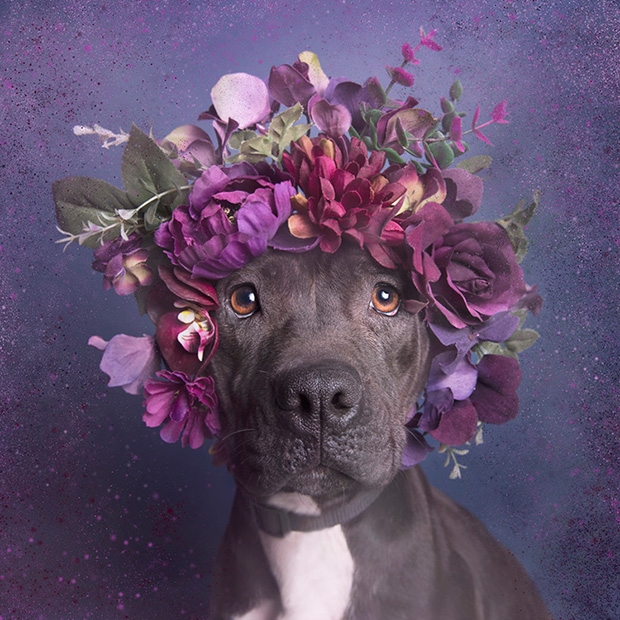 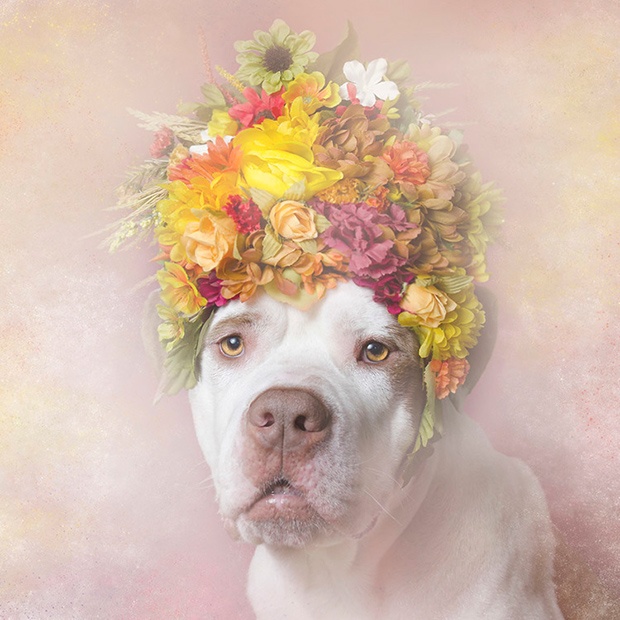 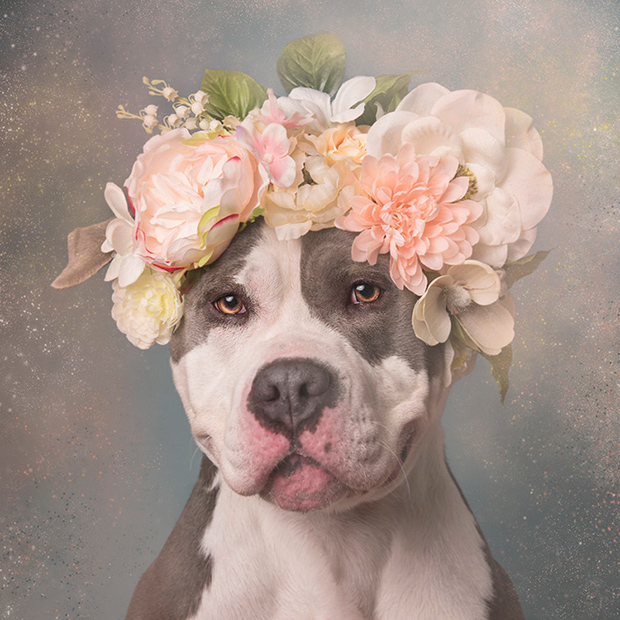 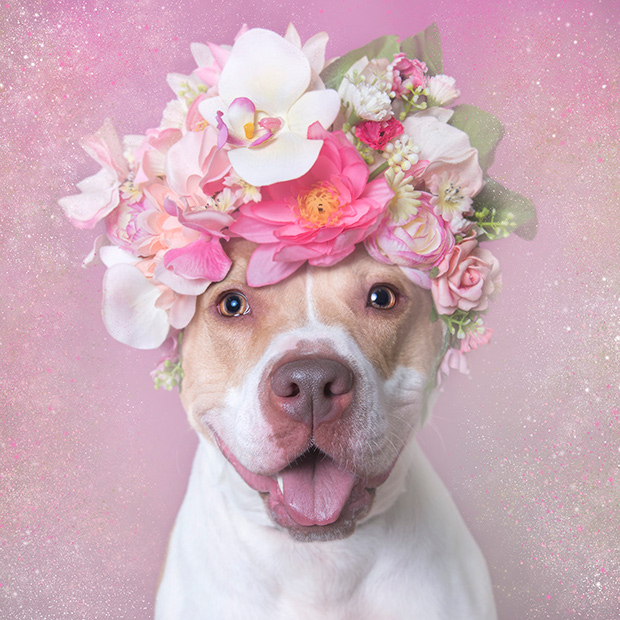 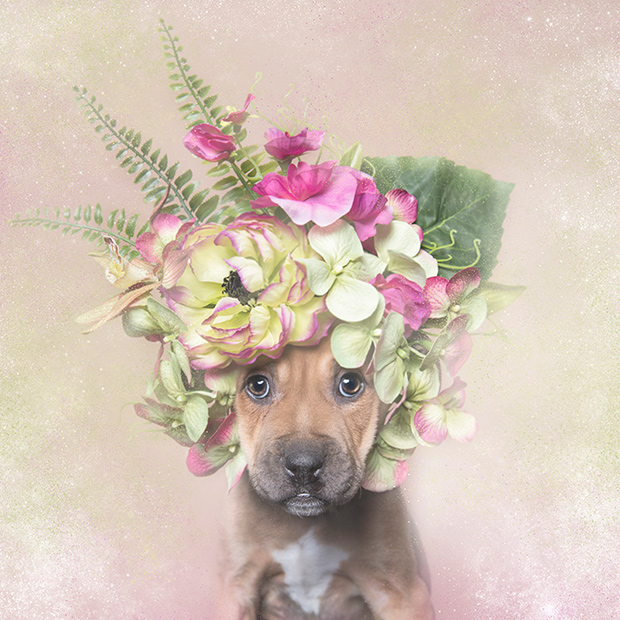 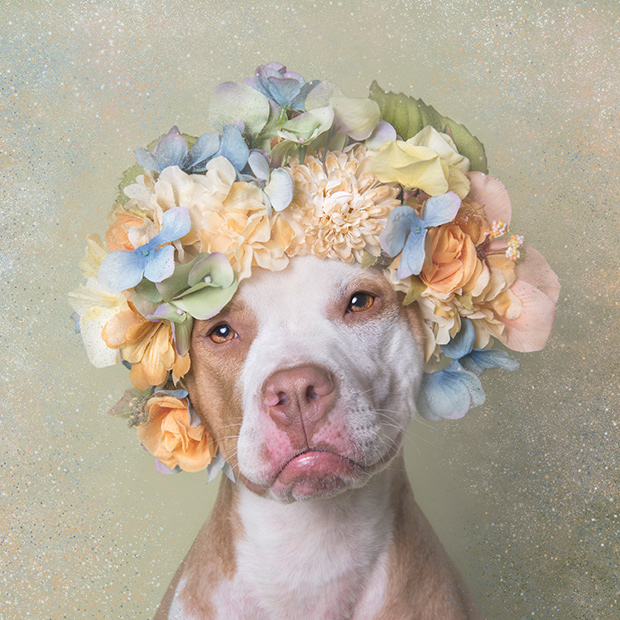 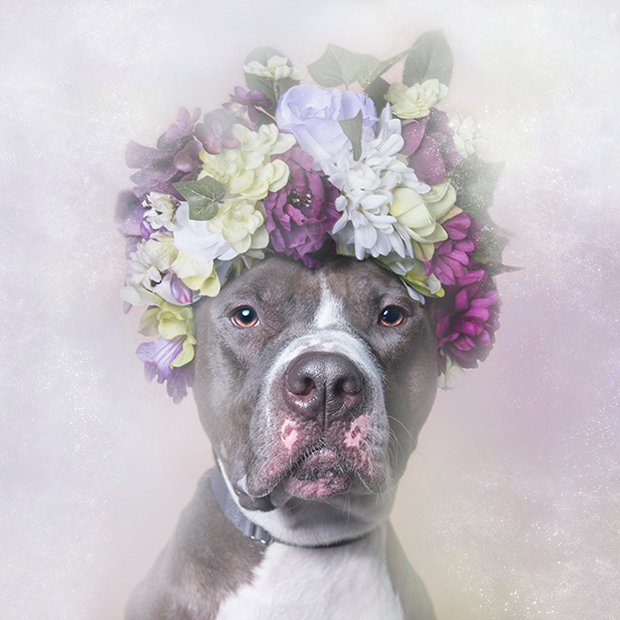 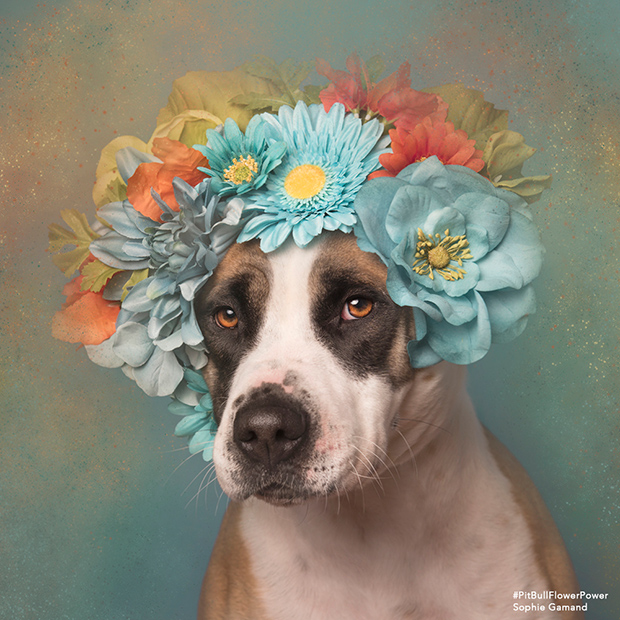