Hard-Hitting Images Examine the Complex Relationship Between People and Elephants 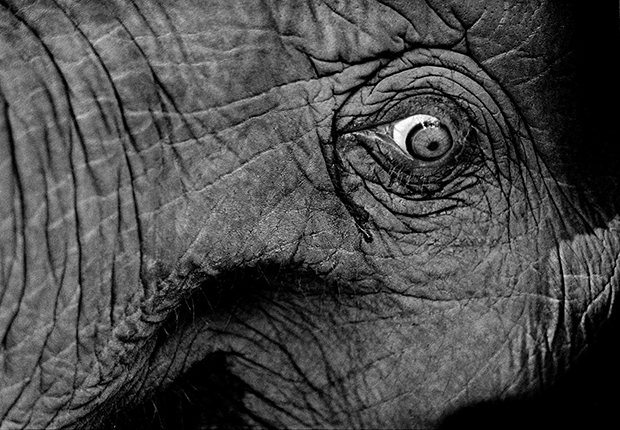 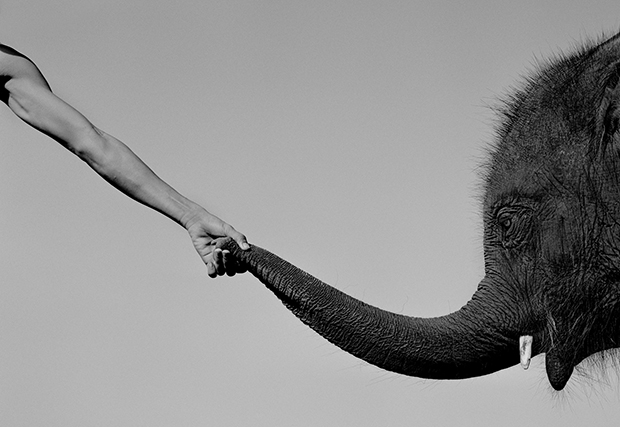 “In Asia, we haven’t quite figured out whether we love these animals or hate them,” says Madras-born, Hong Kong-based photographer Palani Mohan of the elephants he spent over five years documenting. Vanishing Giants is his testimony of the ways in which mankind both cherishes and does violence to the Asian elephants that live amongst humans in villages and cities alike.

As a child, Mohan held great affection and respect for the elephant, but the idea to pursue the complex bond between man and animal first arose when he was living in Thailand, where the animals can be seen both begging in the streets and worshipped in monasteries. Soon, he realized that elephants, though a beloved symbol in Thailand, one for whom hotels and even human beings are named, are also the victims of abuse and exploitation.

Behind the popular tourist activity of elephant riding lies a great deal of suffering at the hands of the trainers and handlers. Similarly, the begging elephants, whose handlers often rent them out without any knowledge of the species or care for their wellbeing, become unhinged and depressed in the streets of Bangkok, where tourists pay money for a chance to feed the giant creatures.

In Africa, notes Mohan, the elephants and humans live relatively separate lives, but throughout Asia, the two species are intertwined. He kept notes up in his studio throughout the project to remind himself that what he sought wasn’t beautiful images of beautiful animals; instead, he hoped to cut to the core of the ways in which we relate to them, and how they relate to us.

The photographer visited more than ten countries and met countless elephants, each of whom he reports had his or her own distinctive personality. The youngsters were his favorites, he says, because they were so playful, although he admits that elephant rough-housing isn’t something to be taken lightly. All elephants were approached only with extreme care and respect, lest they misunderstand his intentions.

Mohan met elephants ranging from the rescued and rehabilitated to those forced to work grueling, hot days carrying logs in Burma and Southern India, but he found perhaps the greatest challenge in the villages of the Karen people on Thai-Burma border. Not only did gaining access to the villages themselves take a good deal of trust-building, but witnessing the “breaking” of the young elephants took a psychological toll.

For centuries, the Karen have practiced the custom of taking elephant young from their mothers, and when they are three years old, caging them for three days without food or sleep. The baby elephant, notes Mohan, will wail at night in response to the cries of his fellow elephants, as he has nails driven into his flesh to keep him from nodding off to sleep. The elephant, says the photographer, has “no idea why this is happening to him,” and the one he saw being broken cried tears as he was being tormented.

As elephant habitats are increasingly razed, the numbers of animals in the wild are plummeting. Still, Mohan encountered elephants living happier lives. In Sri Lanka, he searched for long stretches of time in hopes of encountering a wild elephant. In sanctuaries and orphanages, he saw babies and adults alike eating, playing in mud baths, and living amongst their kind— they are, by nature, social beings. He could spend a lifetime, he suggests, simply watching elephants who are allowed to be elephants. “There’s nothing more peaceful than watching an elephant gently playing with a leaf or a twig,” says the artist, adding that although it takes years to truly cultivate a friendship with and to earn the trust of an elephant, he “fell in love with them all the time.”

To help, the Asian elephants, Mohan suggests donating to one of the many orphanages in Thailand and throughout Asia, like the Elephant Nature Park, adding that tourists should avoid riding elephants or giving money to their handlers in the streets. 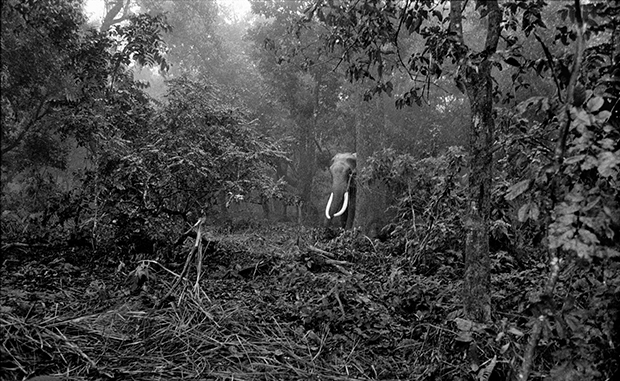 A Huge wild Tusker at a camp site in the morning morning at the Chitwan national park, Sri Lanka 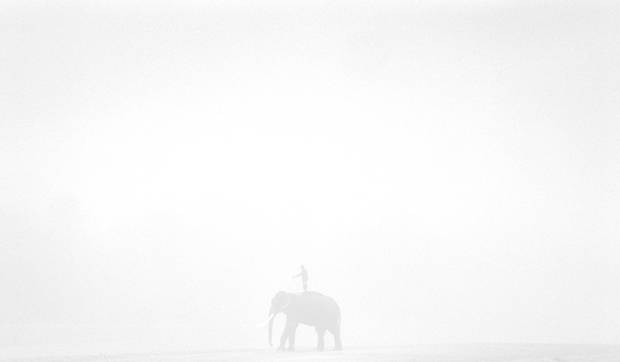 An elephant is bought back to camp in the mist in the Chitwan national park, Sri Lanka. 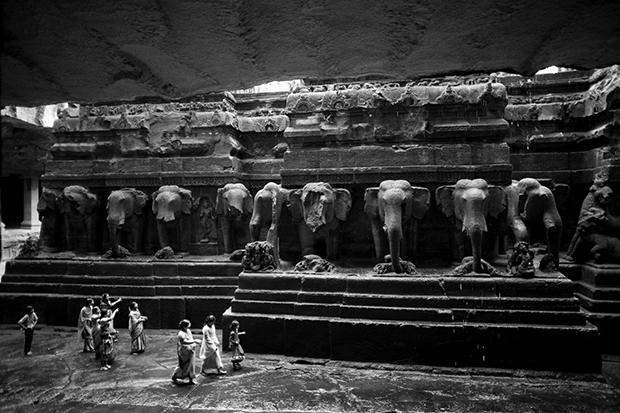 Ancient elephant carvings at the Ellora cave temples in India, hewn from the rock over five centuries 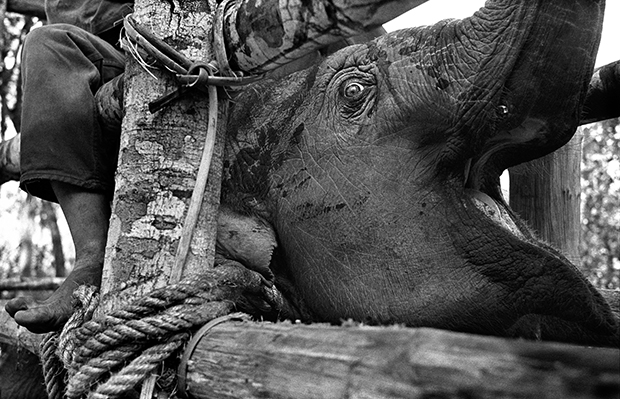 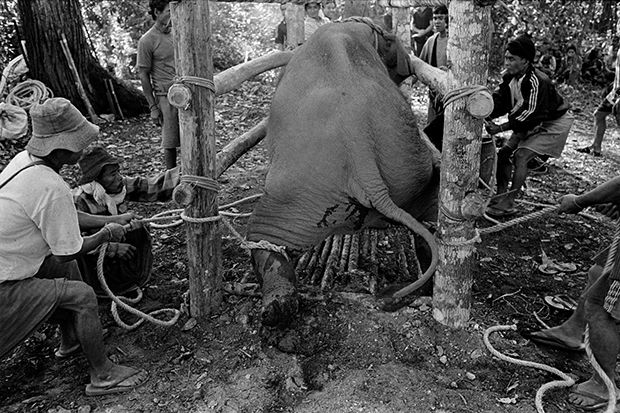 Karen tribesman in a remote part of the Thai-Burma border break in a young elephant using traditional methods including nail-studded sticks, ropes and a wooden crush. 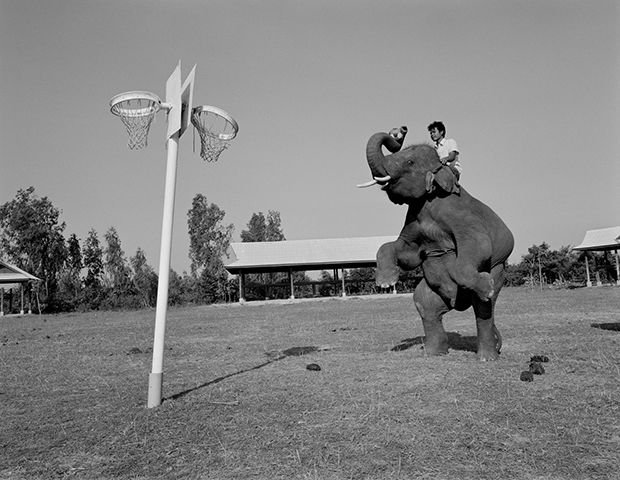 In the village of Ban Ta Klang in Thailand, an elephant practises his slam dunk before performing for tourists. 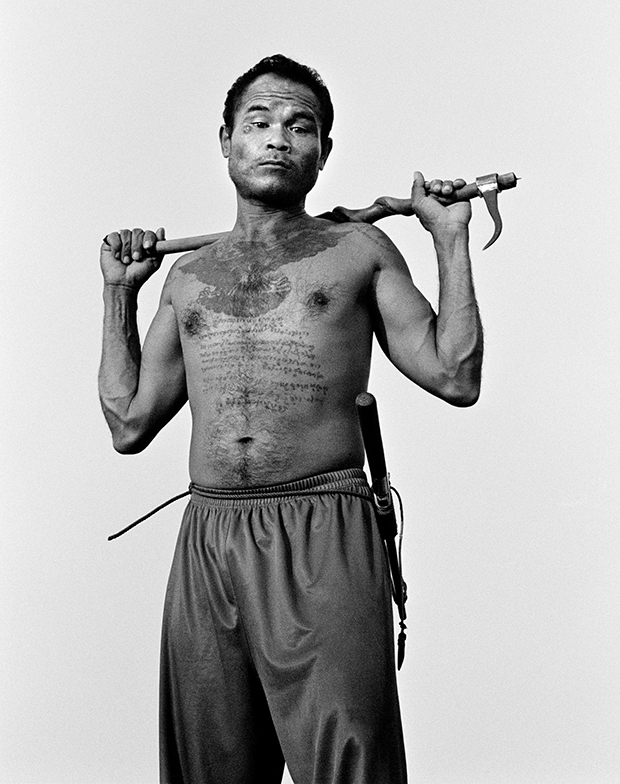 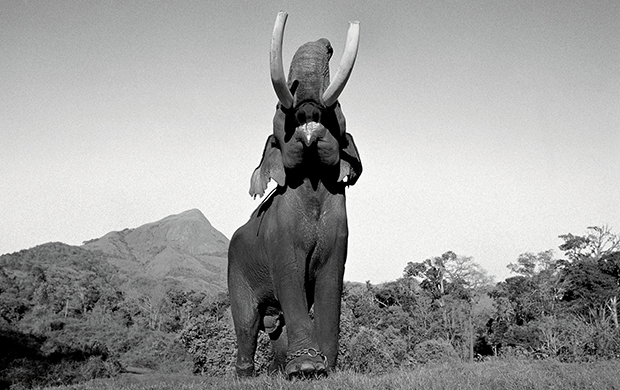 A bull elephant in musth- a period of heightened frenzy which makes a fearsome sight in the Mudumalai national park in southern India. 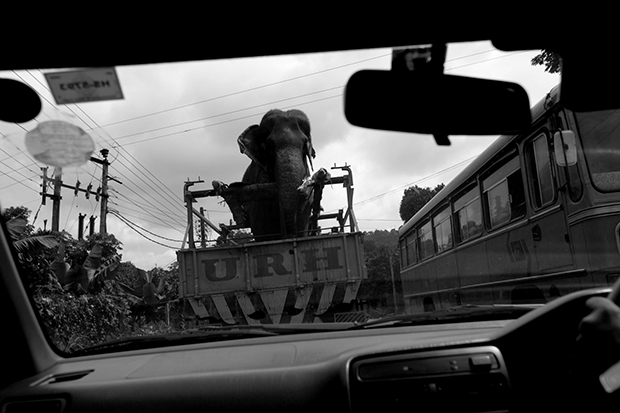 A bizarre sight as an elephant is transported by a truck through the Sri Lankan capital, Colombo 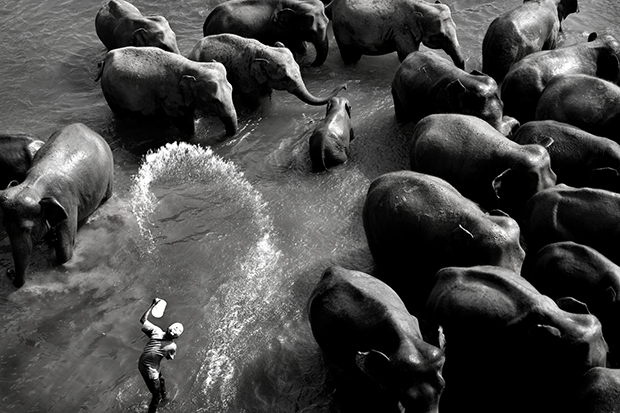 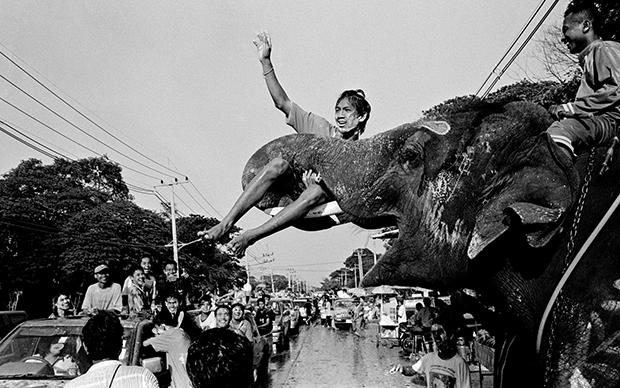 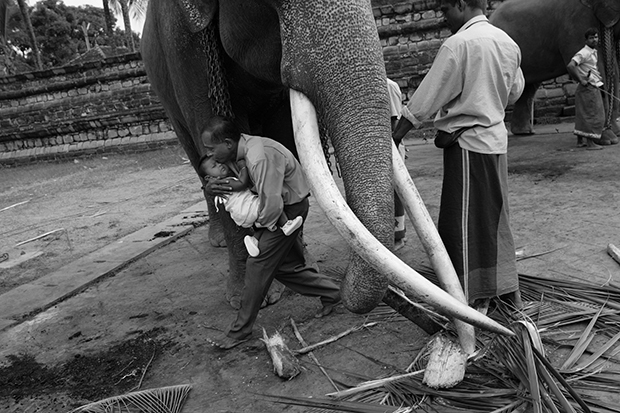 In Sri Lanka and many other Asian cultures, it is considered good luck to pass underneath an elephant with your child. 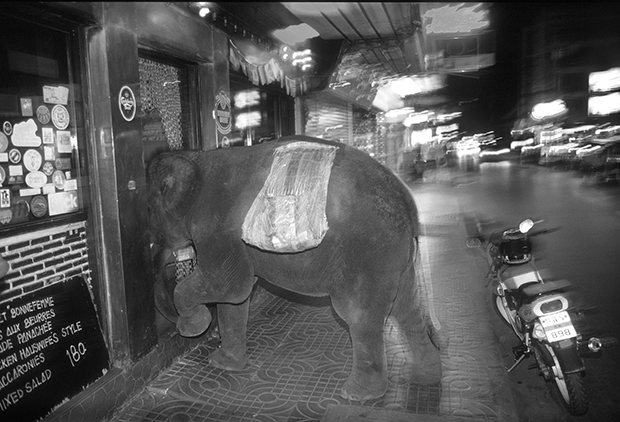 In the Thai capital Bangkok, elephants earn a living by trawling the bars with their handlers, begging for money and food. 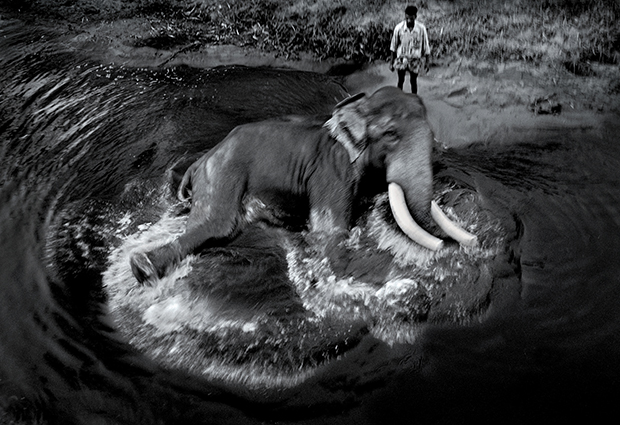 A huge male elephant has a wash in a river at a logging camp on the Tamil Nadu-Kerala border in southern India. There used to be many logging camps in that part of the world employing hundreds of elephants, but there are only a handful of them left now. 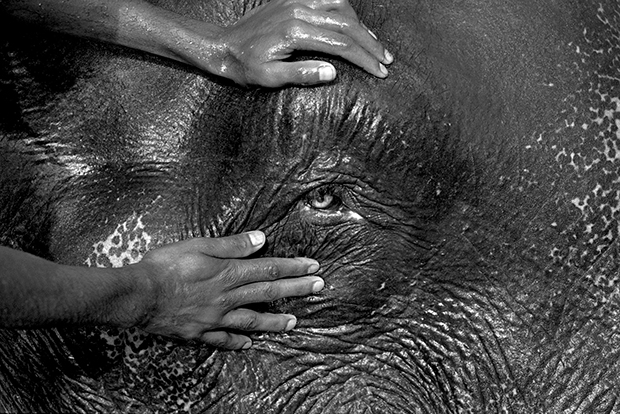 Hands are used to scrub the face clean during an Elephant’s daily bath in Southern India. 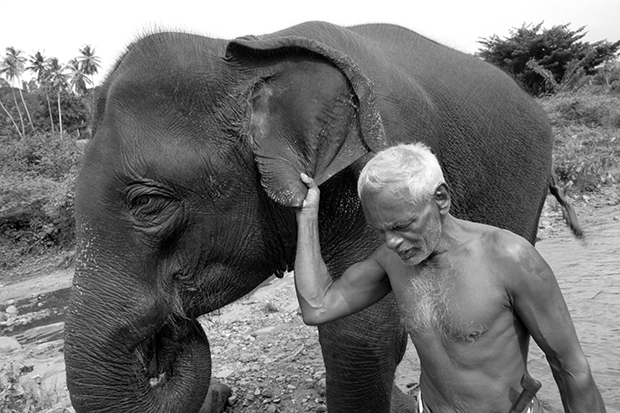 An Elderly mahout leads his elephant in Kandy in central Sri Lanka.