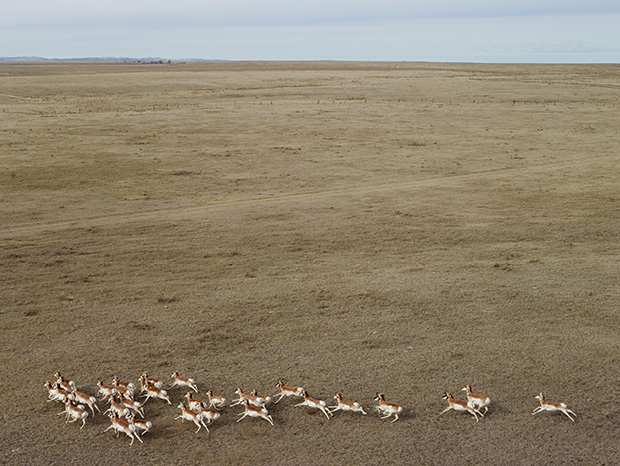 Pronghorn Antelope, Niobrara County, Wyoming, 2013. A herd of wild antelope, which in wintertime can number into the hundreds, roams the high plains that stretch towards the Big Horn Mountains in the background. Early pioneer cattlemen noticed that the native grass animals roaming this area tasted particularly good, and to this day Niobrara County grass has become famous among livestock buyers for the finish it gives cattle. 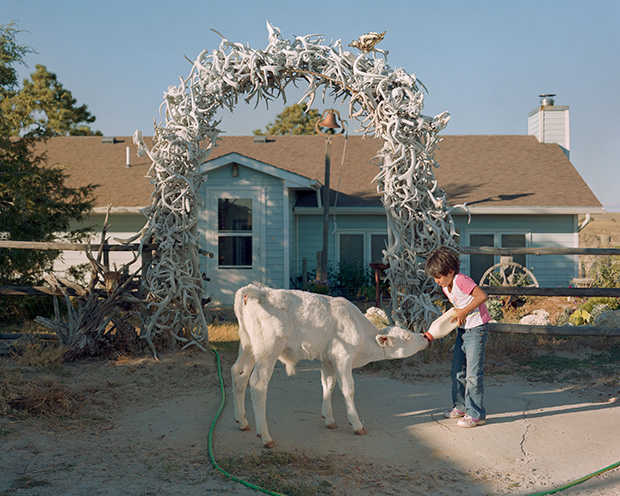 Fawn and Snowball, Cherry County, Nebraska, 2006. Calves whose mothers have died or who have been abandoned are often fed by hand. Fawn Moreland, who is part Ogallala Sioux, came to live with Ken and Sharon Moreland on Christmas Day when she was six years old. 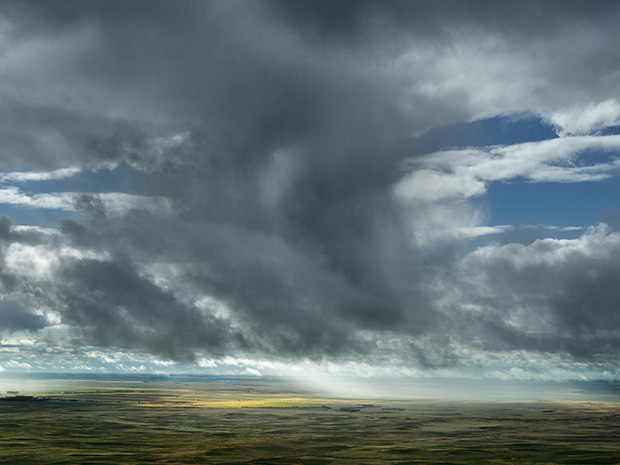 Sun Through Rain, Dawes County, Nebraska, 2013. “From above, the land is like one endless unpunctuated idea—sand, tumbleweed, turkey, bunch stem, buffalo, meadow, cow, rick of hay, creek, sunflower, sand—and only rarely does a house or a windmill or a barn suddenly appear to suspend the sense of limitlessness.” –Inara Verzemnieks

For New York City-based photographer Andrew Moore, the flat and dry landscape of the 100th meridian— the line of longitude that splices the United States right down its center— is far more expressive and redolent than its epithet “Flyover Country” might suggest. Over the past ten years, while the rest of the country catches only blurred abstracted glimpses from the windows of faraway airplanes, the photographer and pilot Doug Dean have captained their small Cessna just above ground, capturing the land as if through a magnifying glass to reveal all that lies within the forgotten plains and sand hills of what we once referred to as “Great American Desert.”

When he first set out to document the thinly populated regions of Nebraska, Texas, Colorado, New Mexico, and North and South Dakota, Moore was compelled by the history of Western expansion, of the Manifest Destiny of the 19th century and all that followed. Both from the air and on the ground, he saw the legacy of the land and its people etched into the earth; here, industrial scars pockmarked the once-virgin sand hills, and in this severe terrain, he discovered ranchers whose ancestors had held the land for generations, whose forbearers were laid to rest in the same soil on which they stood.

Despite those who cling still to their heritage and well-worked land, the region along the 100th meridian has in some ways been deserted. It’s a place of which we hear so much and see so little, where few people elect to build their homes and make a living; the weather is bitter and forbidding. For the ranchers, making ends meet is never guaranteed, and the in the face of climate change and the proposed Keystone XL pipeline, their futures remain precarious and uncertain. In this place that had survived the Dirty Thirties as the Great Depression, the photographer saw sod homes sunken after so many years into the prairie, their memories buried within.

Even with all the evidence of things now gone, Moore’s Dirt Meridian is not a lamentation, nor is it a nostalgic glimpse at what could have been. Instead, it’s a paean to those for whom the land carries still the echoes of an unfulfilled promise, for those who— despite and maybe because of everything they’ve endured—stay put. Although he alludes quietly to the mythologies surrounding the region, the photographer avoids wistfulness and idealism. This isn’t the place and these aren’t the people for the melodramatic, and Moore takes his cues from the terrain itself. America’s heartland is a part of the world where time slows to the point at which the past and the present collide, overlap, and bear down on one another; it’s a region that cannot be read from the window of a passing plane but instead through photographs that allow it to stand still—if only for a moment—as the rest of the world moves on. 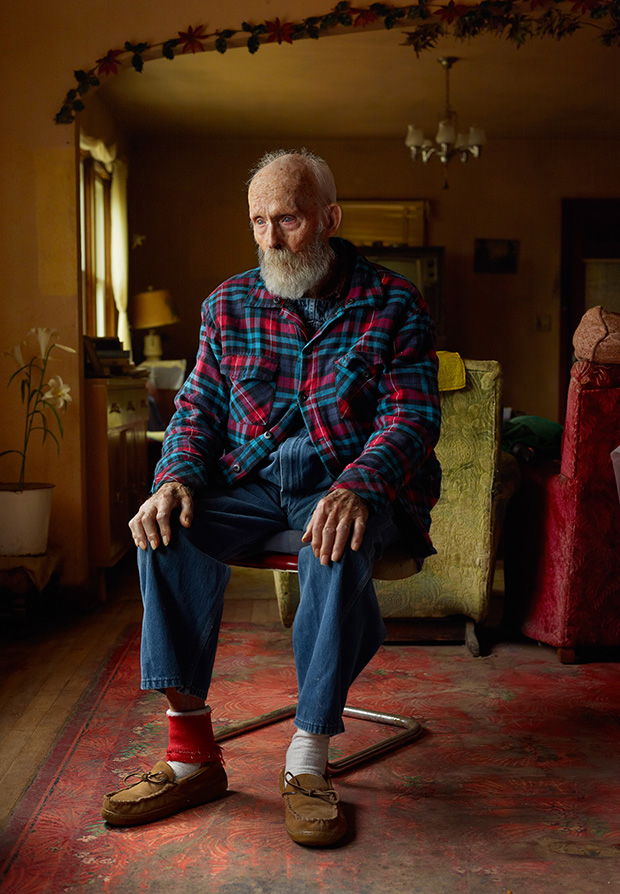 Uncle Teed, Sioux County, Nebraska, 2013. “In an old farmhouse accessible only by dirt cattle tracks, a ninety-two-year-old bachelor—Lynn Lincoln Bauer who’d spent all but two of those years within the borders of his family’s property—was enjoying the first hot water he felt from his taps in twenty-five years… Bauer goes by Teed, short for Teedie, a nickname drawn from his older brother’s childhood attempts to call him Sweetie as their mother did.” –Inara Verzemnieks 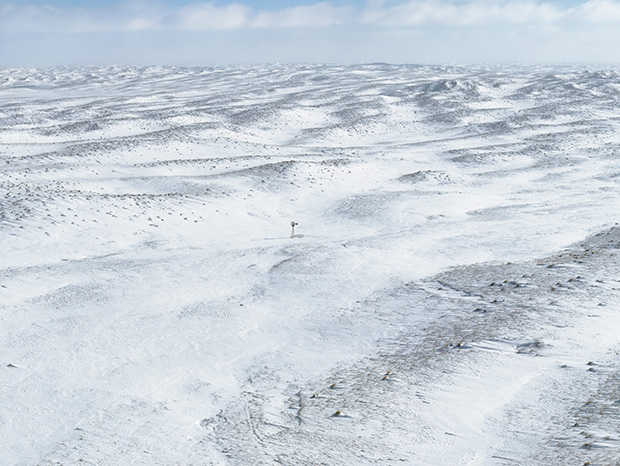 Sandhills Blizzard, Cherry County, Nebraska, 2013. “High overhead, a sharp hissing sound mingled with growls like thunder — and then the blizzard broke in all its terror… A gray waste … an empty silence … a boundless cold. Snow fell; snow flew; a universe of nothing but dead whiteness.” O.E. Rölvaag, in Giants in the Earth, a novel about Norwegian homesteaders in the Dakota Territories, was written in Norwegian for native-speakers living in the U.S and translated into English in 1927. 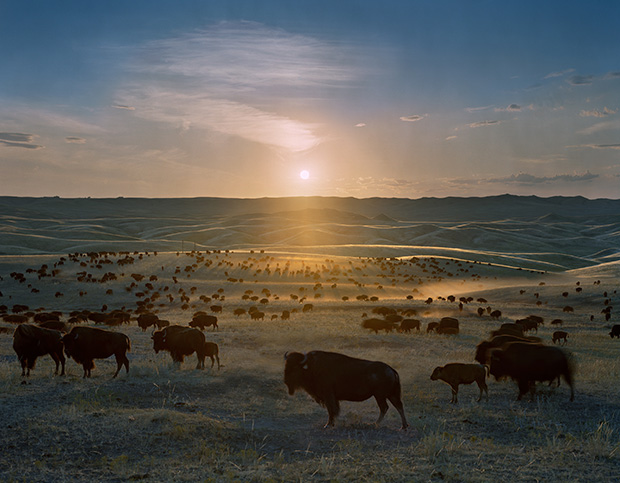 Flying H Buffalo Ranch, Walworth County, South Dakota, 2006. A buffalo can jump a six-foot gate, so for years buffalo ranchers built very substantial fences: six wires with taller posts.  Now they build a three- or four-wire fence and electrify one of the wires from time to time. As buffalo are very quick studies, the fence doesn’t even have to be energized to be effective, once the animals learn of electricity’s potential wallop. 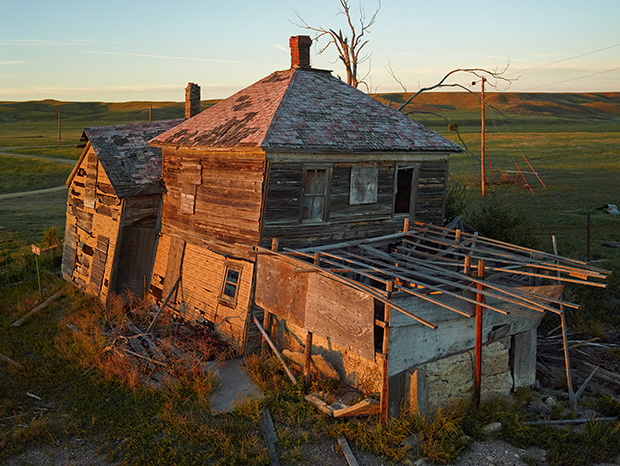 Capa Hotel and Bathhouse, Jones County, South Dakota, 2014. The railroad town of Capa, located next to a thermal spring in the Bad River Valley, was hammered together out of frame lumber and old structures from the dying town of Bovine in 1907. The story is that the word CAPACITY was written across the doors of the boxcars that came through town. Then, when anyone slid the doors open, the word was cut in two: CAPA CITY. The Capa Hotel made some extra money by letting guests bask in the hot mineral spring that poured into a masonry tank out back. The hotel has long since closed but the thermal spring still flows today. Capa has one remaining resident, Philip O’Connor, a retired teacher, son of the former postmaster and the ghost town’s unofficial historian. 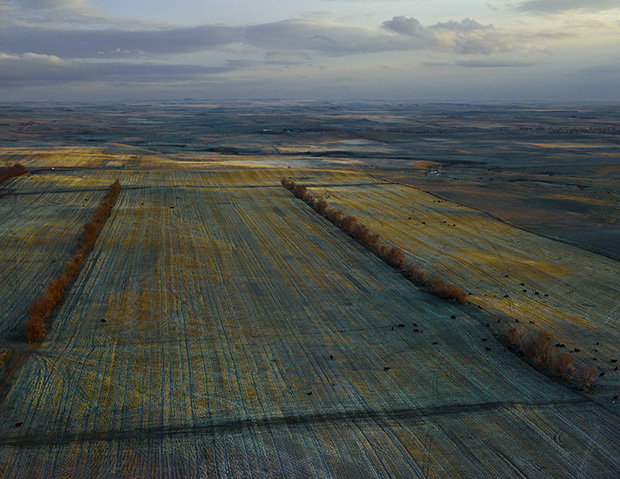 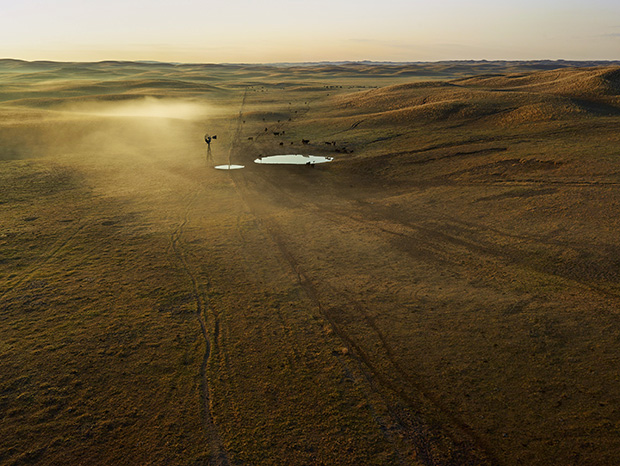 First Light, Cherry County, Nebraska, 2013. Cattle and a heron share a drink at the tank in the residual morning fog. Much of the success of cattle ranching in the Sandhills is due to the shallow reach down to the Ogallala Aquifer. In some places it’s only six feet to water, so one can easily and cheaply put down a windmill in order to water livestock anywhere in the vastness of this terrain. (There are many sub-irrigated meadows that provide hay at the driest of times.) The hilly landscape provides the herd with protection from the wind and snow. However the quality of the grass is not as good as on hard soil land, so it can still take twenty to thirty acres to support just one cow/calf pair. 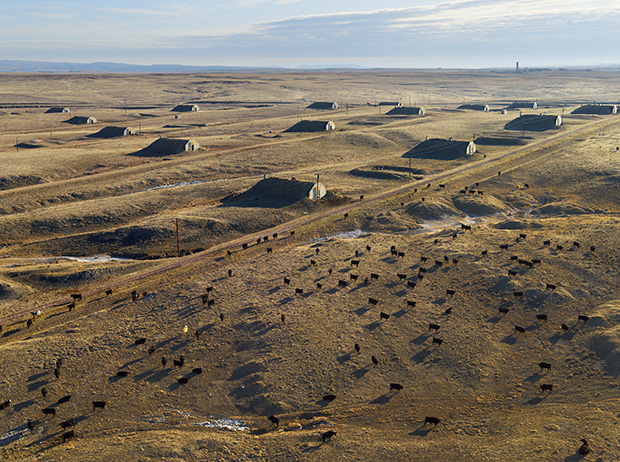 Grazing by the Igloos, Fall River County, South Dakota, 2013. The Black Hills Ordnance Depot, known to its one-time residents as “Igloo” because of the shape of the concrete magazines, was established in this out-of-the-way corner of South Dakota in 1942 by the U.S. Army. It was the only ordnance depot built specifically to store chemical weapons, which included nerve gas, mustard gas and sarin gas, as well as conventional weapons including bombs up to 10,000 pounds. The layout of igloos (and the open air pads between them) was designed to prevent an explosion in one from spreading to others.  The smaller structures in the middle of the picture were called “foxholes”, where workers could seek shelter if there was a problem. Presently the base is owned by several ranching outfits. 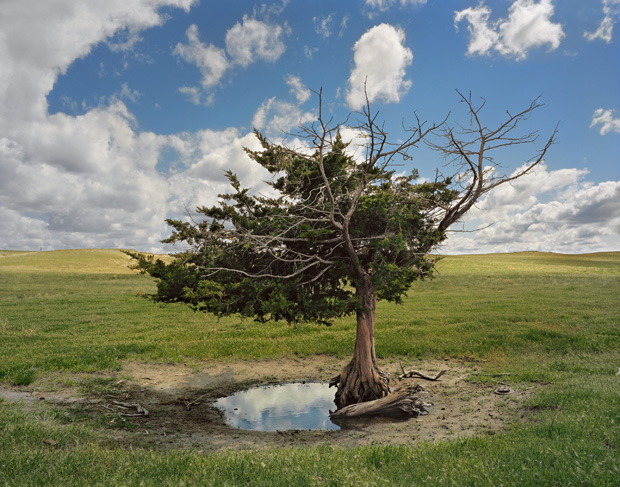 Homesteaders’ Tree, Cherry County, Nebraska, 2011. This tree originally stood in the yard of a two-story log house owned by Del Hatten. As the story was related to me, one day his wife left him and went back to her parents; Del, who was drunk, went looking for her, took a shot at her on her folks’ porch and, although he missed her, he assumed she was dead and promptly rode down to the river and killed himself. He was originally buried just outside the little cemetery just down the road from this tree, although the unmarked grave is now inside the fence. 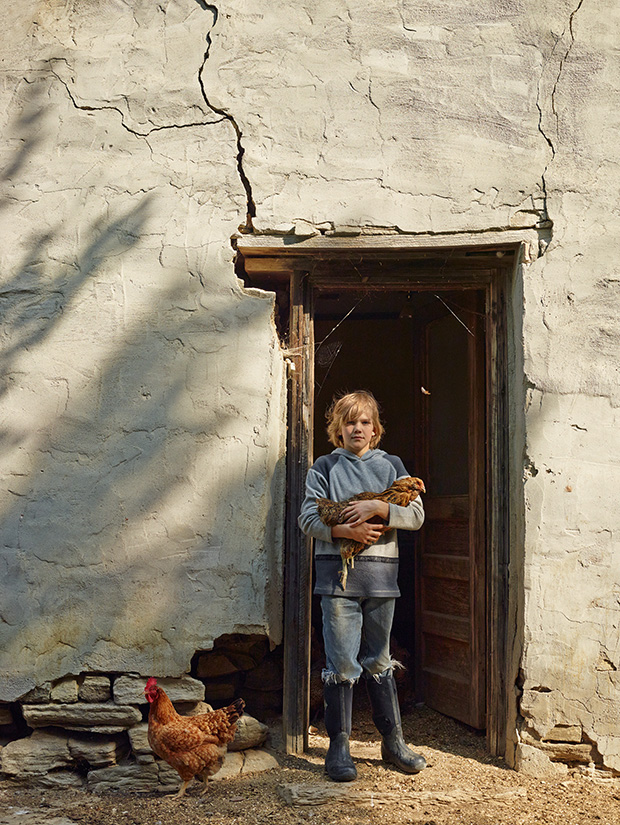 J.D. Jerde and the Old Post Office, Harding County, South Dakota, 2014. Before it was the chicken coop for the Great Plains Buffalo Ranch, this old house served as a post office in a town to the west. In previous times, it was common for these to be located in someone’s home. Often it was just a box or a crate in the corner of a small room, but nonetheless, for the homesteaders it was a prominent status symbol to be designated as such. 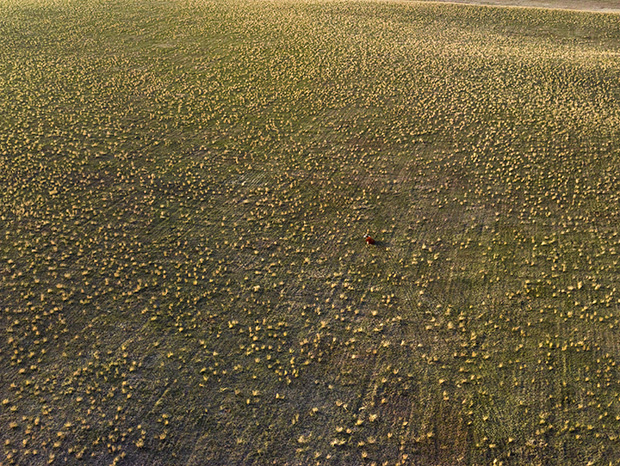 Lone Cow, Dunn County, North Dakota, 20. Much of the land in western Nebraska and North and South Dakota is very well suited for cattle ranches because grass and water are plentiful most years. When both are in short supply, stocking rates can be cut back. Ranching itself is closely tied to the condition and character of the land, which not only keeps ranchers highly attuned to the health of their property but also leads to families owning and operating ranches for generations. Still, the economics of ranching have dramatically changed over the years; where once a family could be supported on the income of two-hundred cows, now it requires almost a thousand head. 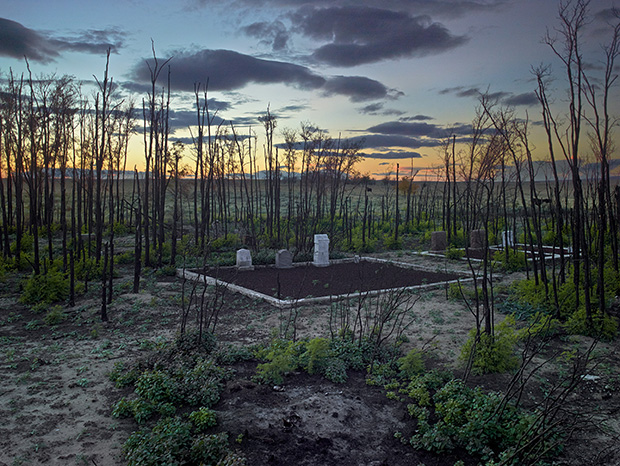 Otto Cemetery, Union County, New Mexico, 2014. Toward the end of the nineteenth-century, the range-cattle industry, which had flourished as long as the price of beef was high and the grass was free, began to decline as the country gradually filled up with homesteaders. However the sheep business was getting a good start. In 1884, Christian Otto drove four thousand sheep here from California and later became one of the county’s wealthiest men, with a flock that at times numbered over one hundred thousand head. In 1920 Otto built this nondenominational cemetery because of the many deaths in the community from the Spanish Influenza. Caretakers recently set fire to the cemetery because it was completely engulfed by tumbleweeds.

Badland Ponies, Shannon County, South Dakota, 2014.A herd of brood mares, used to raise bucking horses for Native American rodeos, traverses open ground on the Pine Ridge Reservation. “The horse, and the horse alone, accounts for much of the success of the Spanish explorers in the semi-arid region of the north and in the Great Plains… The horses of Spain were the horses of Arabia, of northern Africa, of the Moors; in short, they were the horses of the desert. This meant that they were hardy and tough, could live on scant food, on forage and grass, and did not depend entirely on grain. This Asiatic, Arabian, African-bred horse (and cattle of equal hardihood) flourished in semi-arid America”. Walter Prescott Webb “The Great Plains” 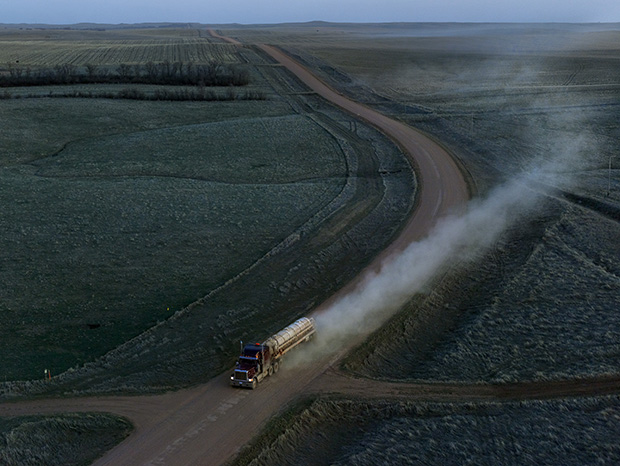 Truck at Night, McKenzie County, North Dakota, 2013. The overwhelming increase in traffic, especially that of heavy trucks, in the Bakken oil fields has created issues with airborne dust from the gravel roads and an accelerated deterioration of roads in general in western North Dakota.