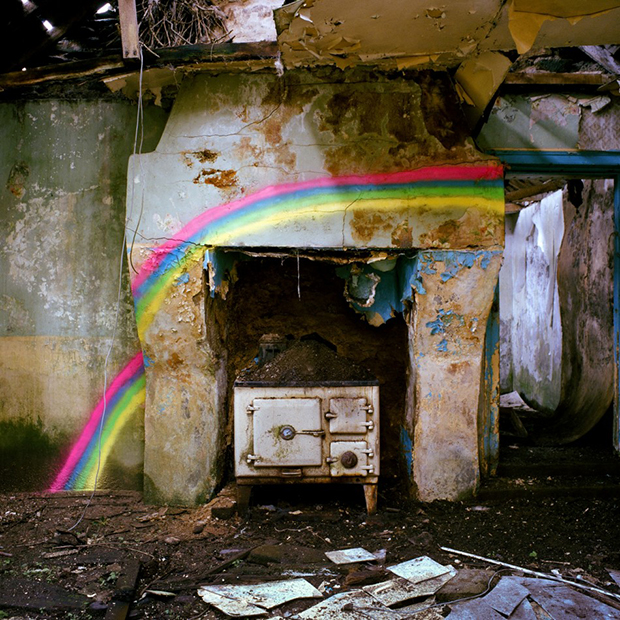 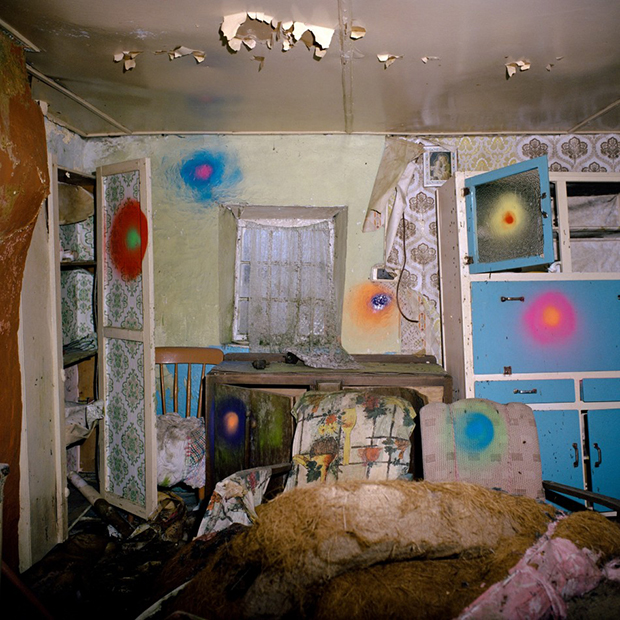 Nostalgia can often slow us down and infringe upon the present if we let it. Photographer Jill Quigley‘s approach, in her work entitled Cottages of Quigley, was to meet the present head-on and intervene directly, in the here and now, as opposed to treating her subject matter “as an emblem of the past.” For this body of work, Quigley, who graduated with an MFA from the University of Ulster in Belfast, was looking for a way of “engaging with the rural area in Donegal in Ireland” where she grew up in a way that made use of her “familiarity with the area but avoided too much sentimentality or introspection.” When first considering shooting abandoned cottages she avoided the idea because she saw them as a “sort of romanticized ‘ruin porn’,” but later realized they were “full of possibilities for interaction, and therefore were a means of exploring an aspect of the local landscape in a very direct way.” The resulting body of work is a playful, nouveau kind of self-portrait that leaves her mark in every frame, though she is nowhere to be seen. 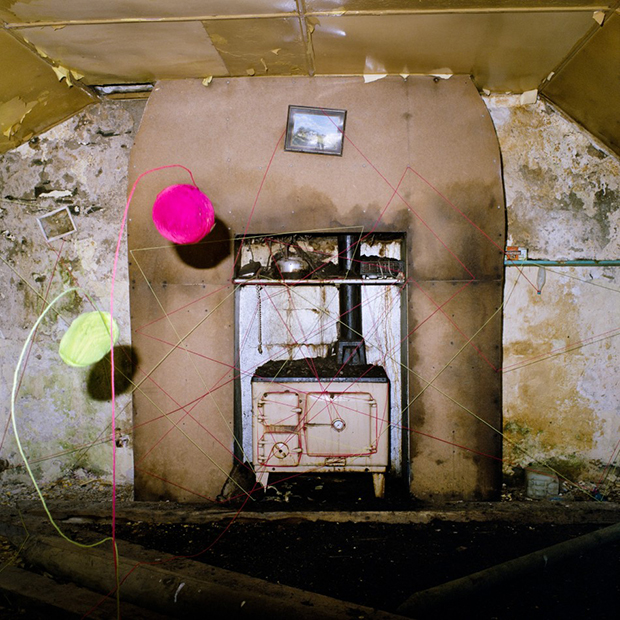 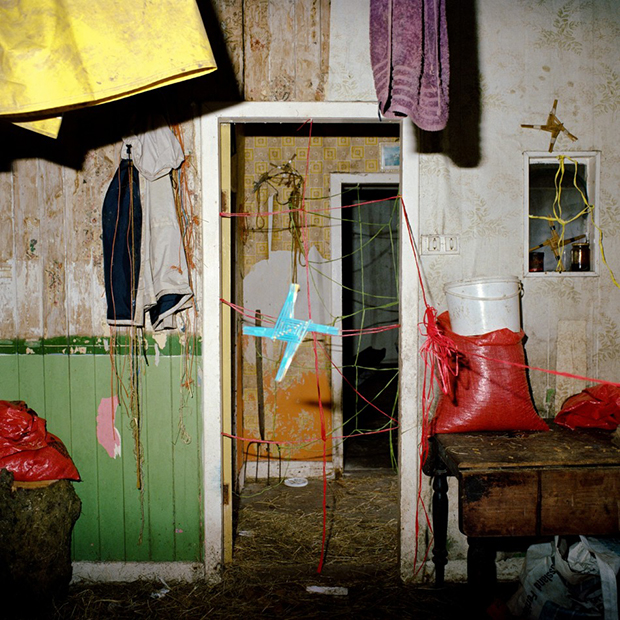 Can you explain to me any personal significance ‘the cottage’ has to you?
“This type of building, a white painted, thatched-roofed, two room cottage, is a common feature of tourism imagery of rural Ireland, associated with a disappearing way of life in the countryside. There are loads of these ruins in the Quigley’s Point area, and most people in Ireland would be familiar with similar cottages. They are abandoned as the inhabitants move to more modern houses (these cottages are usually very small and dark), or the last generation of occupants dies. So the cottages are left empty until they fall down, or farmers sometimes use them as sheds. Although local people enjoy the reminiscences that the old houses evoke, the attitude to the ruined building itself is generally pragmatic rather than romantic.”

Is there any reason you didn’t put people in the photos (yourself, I’m thinking) and/or, stylistically the color and informal sculpture aspects you’re adding feel really beautiful and chaotic at once – did you have any vision of how you wanted the rooms to look while planning these shoots?
“The interventions are deliberately frivolous, as the intention was for playful interaction rather than creating deliberate meaning. The use of brightly coloured cheap craft supplies, spray paints and glittery things is intended to contrast with the decaying materials in the interiors. To me the important thing was the relationship between the remains of the house and the intervention, so I think introducing another element, such as a person, would have been a distraction. Certainly if it was me. It was my hope that the effect would appear spontaneous, but the process was not entirely so. I would take an initial snapshot of the interior, then print it out and scribble on it until I found an effect that I thought would work. Then I would return with my big bag of colourful supplies. Sometimes the interventions worked out as I’d planned, but often the results were unexpected.” 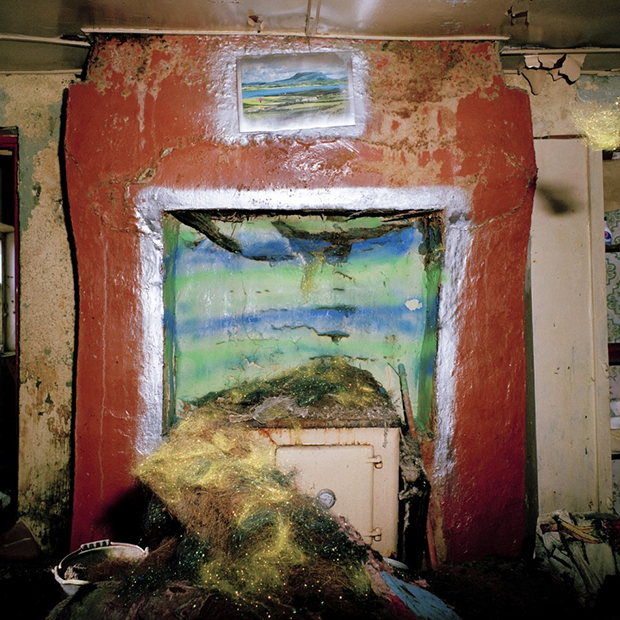 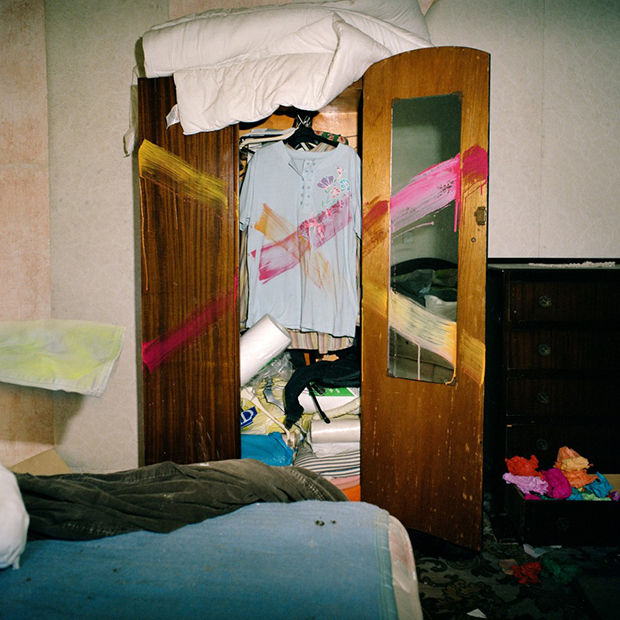 Any nostalgia you’d care to share with respect to these rooms?
“My parents have a dairy farm, and there is a ruined cottage in one of the fields. An old couple lived there but they must have died when I was little, as I remember exploring the house when it had been empty for along time and going through all the stuff that was left behind. Nostalgia is inherent in this type of subject matter, so the aim of the process was to reinterpret rather than oppose it entirely. The project has been perceived by some as simply vandalism, but the owners of these abandoned houses were pleased that I was taking an interest and finding a use for them, and I think they can be viewed as more than just relics.

“The desire to preserve the cottages as artifacts is understandable, but I think stems from a romanticism that doesn’t reflect their reality, and is an attitude I haven’t encountered in local people who are familiar with them as part of the rural landscape. While there is nostalgia to be drawn from them, they are also part of the present landscape and are used practically, if at all. So, even though they have a nostalgic quality, I don’t think that nostalgia should give in to a romantic reverence.”

Quigley will be showing work at Seen Fifteen, in London, beginning in October.