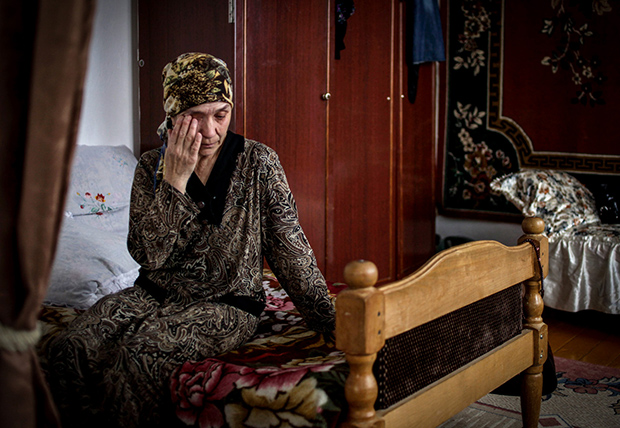 Roza Yevloyeva, mother of 20-year-old suicide bomber Magomed Yevloyev, sits on her son’s bed during an interview at her house in the town of Ali-Yurt, southeast of Ingushetia’s biggest city Nazran, February 16, 2011. Speaking softly through tears in her family’s tiny home in the North Caucasus, Yevloyeva apologized for her son’s suicide bomb attack on Russia’s busiest airport. Yevloyev detonated explosives strapped to his body at Moscow’s Domodedovo airport on Jan. 24, killing 36 people. © Diana Markosian

Diana Markosian: I was introduced to photography through photojournalism — so the first phase of my work was spent shooting news events. In January 2011, a terrorist bomber detonated himself at the busiest airport, killing 36 people. I was there along with a dozen or so photographers, a handful of them working for the same agency as me. We circled each other, and by the end of the night, I had sold one image and made none I was proud of. I was disappointed in myself, but still wanted to cover this story. I decided I would meet the family of the terrorist bomber. I traveled to Chechnya, a two hour flight from Moscow, and drove to their home, which was blocked off given the situation. When I arrived in their village in the North Caucasus, I found myself alone. I met the terrorist’s mother, and interviewed her on her dead son’s bed, speaking softly through tears. The image I made, and the experience behind making it, changed the course of my photography. It helped me realize that I can’t be where everyone else is.