Photographer Documents Life Inside One of Africa’s Largest Slums 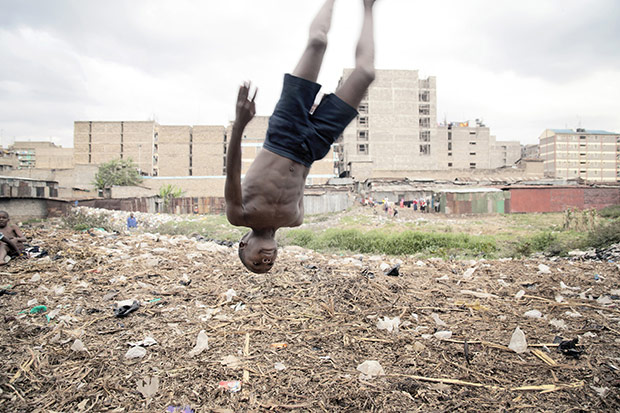 A young boy does an acrobatic jump over garbage in the dumpsite of north Mathare. 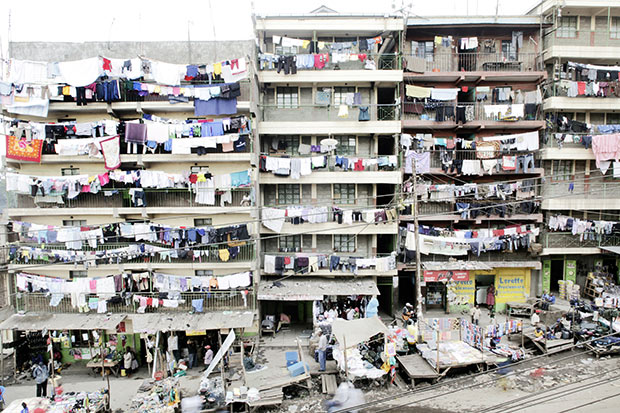 A typical housing complex in the Huruma area of Mathare.

Mathare is a slum of 600,000 people living within three square miles on the east end of Nairobi. Photographer Filippo Romano has travelled there six times over the course of two years to document the social complexities of slum life. We speak with him about what he’s learned and his experiences visiting one of Africa’s largest slum. 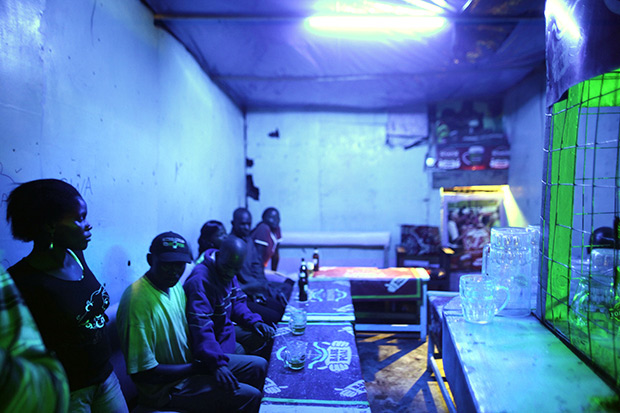 Men and women sit in a darkly lit bar in the ghetto of Mathare. 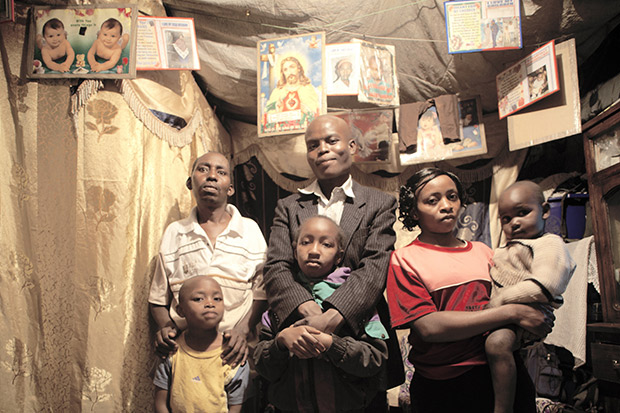 A family from the Bondeni area in Mathare.

You mentioned you’ve visited many slums, what exactly sets Mathare apart from the others? What differences do you notice?
“It is difficult to make a comparison without the risk of being too general. From a general point of view all slums look the same from the outside, but the real difference lies in the social dynamics inside.

I visited Haiti in 2010 after the earthquake, but my time there was definitely too short to compare it with my Nairobi experience. The Bamburral slum in Sao Paulo is also difficult to compare because in Brazil the government is faced with many contradictions when dealing with the poor conditions of life in the favelas. While here in Kenya, the government seems to be too paralyzed by their own corruption to make any serious progress in the slums.” 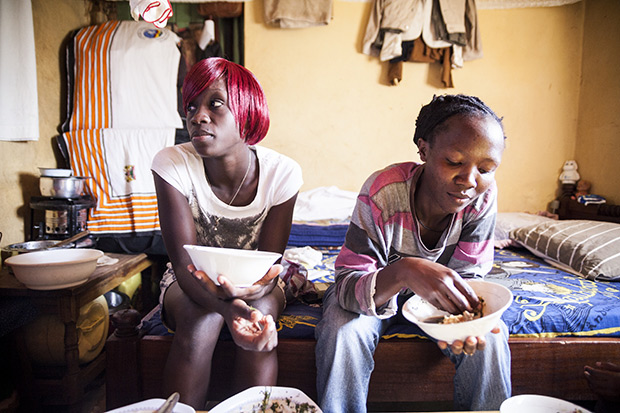 Benta and Elisabeth they are having their daily Ugali (polenta).

What story are you trying to communicate with viewers?
“I started to explore the Mathare slum by looking at its complexity and trying to document its urban geography and architecture exactly like I normally explore cities. I wanted to go deep inside the social organization of the slum, to get close to the people without simulating intimacy and to observe the ghetto as a spectacular city and not just a marginalized area of Nairobi. It’s not just a poor environment, but a complex environment, a parallel city, where many people live with less than a dollar a day.” 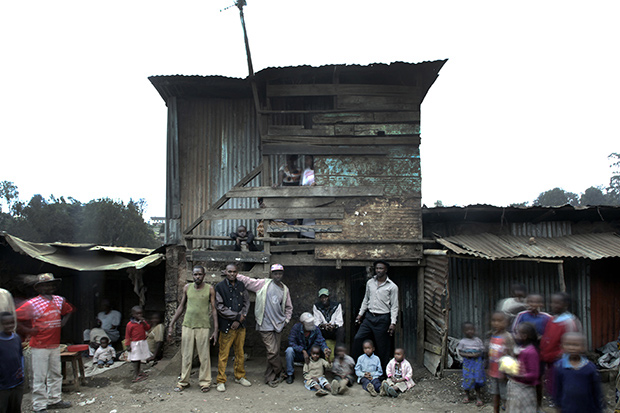 A building in the Huruma area of the Mathare slum. 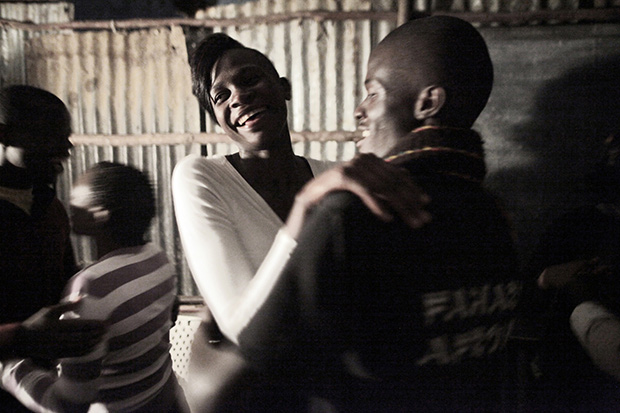 How did the project grow and change as you returned several times?
“The project slowly grew, trip after trip, until 2014. I’m a slow photographer, I don’t like the fast intimacy of traditional photo journalists. I think that a documentary needs a sort of incubation period where you get familiar to people and over time, for example, when they start to call you by name.”

What did you learn about the slum during your time there?
“Mathare was a real discovery. I have seen millions of photograph of slums but I never had the idea of the social dynamics which are behind the generic topic of poverty.

The slum is the hidden city, the part not visible to the official Nairobi. Like a lung on a body you don’t see it from the outside, but it’s necessary to make the body survive. So in this sense, the slum is important for Nairobi to have – a cheap working class ready to work in the Western factories in the surrounding areas or to serve as maids in the rich villas of the west side of the city.” 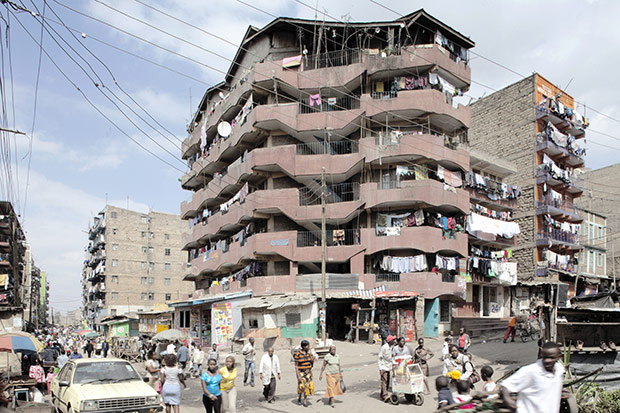 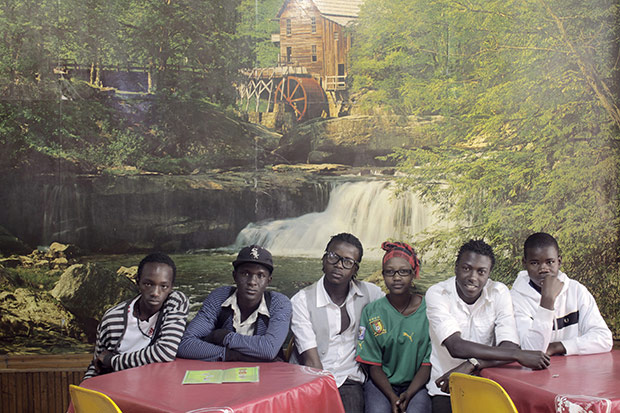 A group of young dancers wait for their auditions in a bar in the Pangani area of the Mathare ghetto.

What is the daily life like for people living here?
“The people in Mathare struggle to make a living. Most can’t even make one dollar per day. There are many types of jobs done by the people of the slum. The women are hardest workers, they are the ones who feed and take care of the family while also trying make an income for their houses. Many women here have two or three jobs, working as housewives for richer families in the mornings and in the afternoon they start their second job as a food sellers, tailors or cooks. Among the men, any kind of artisanal job is done in the ghetto from blacksmith to coffin makers. Whether legal or illegal, the ground zero of the slum economy is the street seller.” 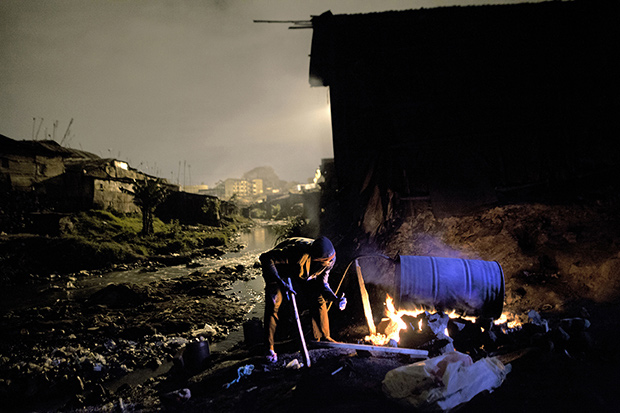 A changaa worker is testing the boiling of the liquor in an illegal brewery. Changaa literally means “kill me quick” and is the illegal liquor produced in the slums of Nairobi. 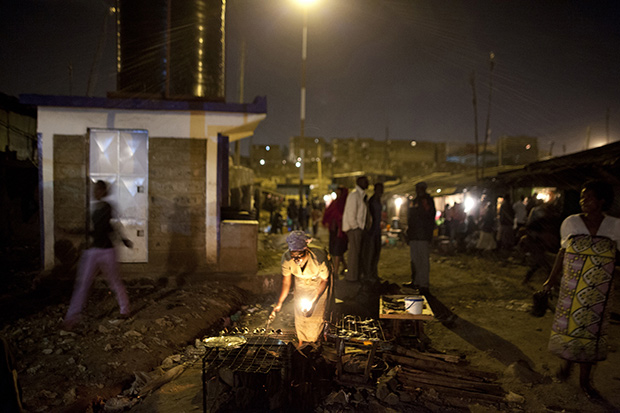 A woman grilling fish from the lake Victoria.

As a photojournalist, how do the people react to you working there, documenting with your camera?
“In Mathare, most of the time I ask people permission to take their picture. I don’t walk around with my camera hanging from my neck, I find this too aggressive. I try to explain to all potential subjects the story behind the project I am working on. I have a booklet with the other pictures I’ve taken, it helps explain what I’m doing and lowers the potential for distrust. I try as much as possible to give the subject a picture after I photograph them as a way to create a bond and to enter into their memory.”

How many times have you returned to Mathare? Is the project complete now? If yes, how did you know it was finished?
“I have been to Mathare six times now for periods lasting as long as one month at a time. It takes time to be accepted into a community, to try and get an insiders look at their lives takes even longer. Instead of going to many places in a short amount of time, I prefer working on long term projects in one place. I try to go deeper inside all the time and the idea of coming back is important to my approach as a photojournalist. It helps to make a distinction between impressions and documentation.

At this point in the project, I think there are significant parts of this narration, but other important aspects are still missing. It is impossible to say I am finished with this project. My hope is to pass the baton to somebody who lives in the ghetto, a local photographer who will continue the project, who would potentially follow the same approach as mine in documenting Mathare.” 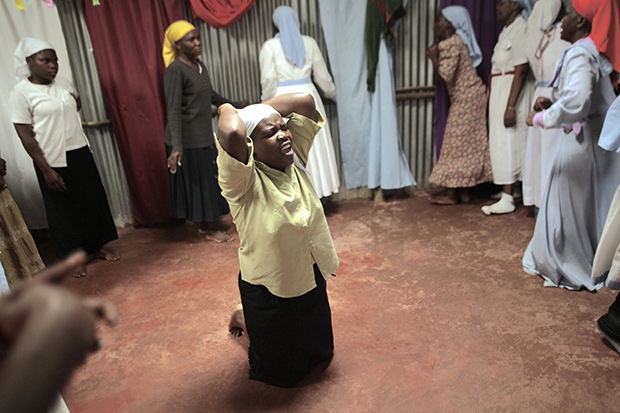 A religious ceremony in Mabatini, Mathare. 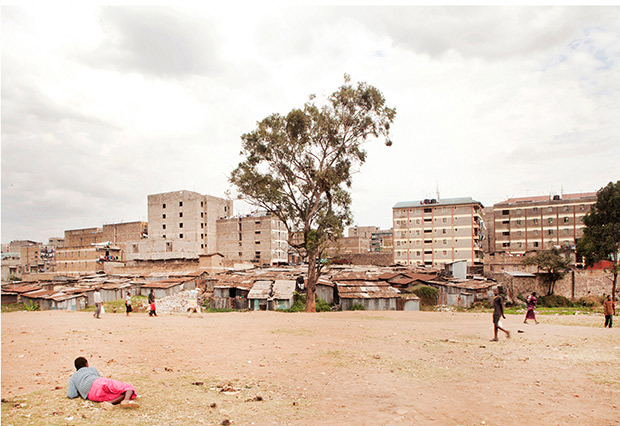 The empty section of north Mathare.

Do you have an end goal for this project?
“My goal is to create a online archive for those in the field of study or researching the ghetto from a social and urban perspective so they can find good visual materials and resources that can improve their research. I’m not interested in newspapers or magazines who want to sensationalize or show general reporting of poverty and slums.” 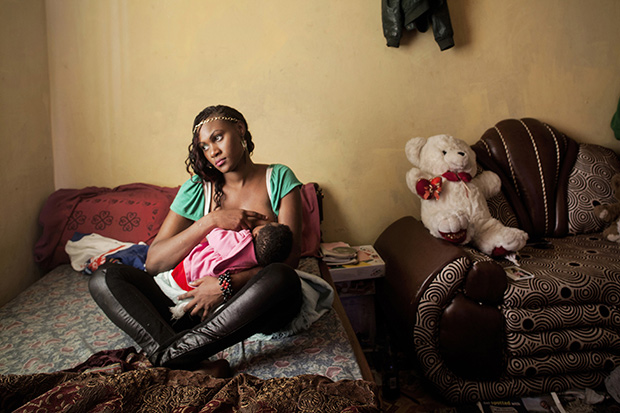 Georgina, a young mother with her child of a few months old, sit in a house in Huruma, Mathare. The father of the baby left Georgina after she fell pregnant, she now lives with her mother.