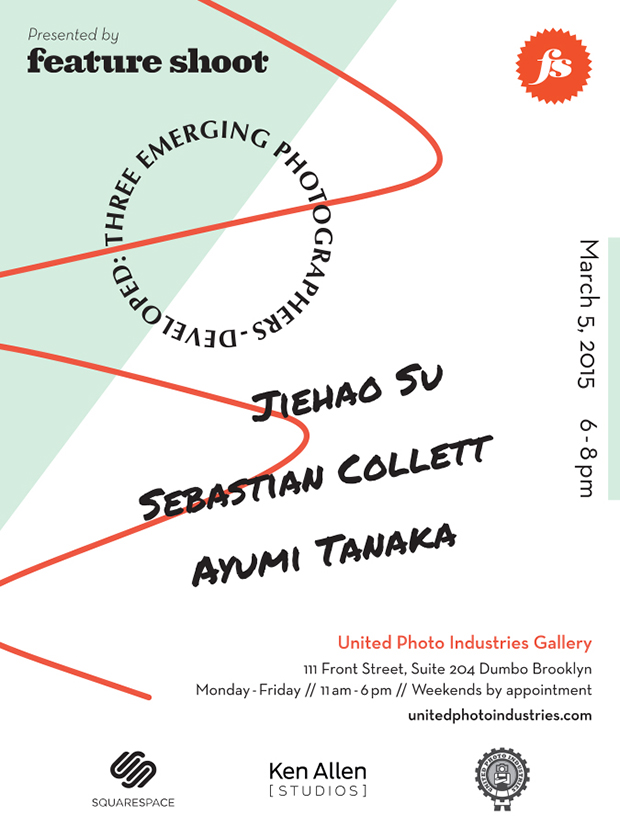 We are thrilled to announce the opening of Developed: Three Emerging Photographers, an exhibition featuring the work of the three winners of the first annual Feature Shoot Emerging Photography Contest: Jiehao Su, Sebastian Collett, and Ayumi Tanaka.

Grand Prize winner Jiehao Su will be showcasing pieces from his ongoing project Borderland, a wistful visual narrative tracing the rapid urbanization of China’s coastline. In his subtle and muted images, he draws parallels between the shifting topology and the feelings of loss and alienation that come with growing up and leaving the childhood home. Sebastian Collett will present ten works from Vanishing Point, an introspective return to his Ohio hometown as told through portraits of modern day youth coming of age. With pieces from Wish You Were Here, Ayumi Tanaka brings us into the realm of the fantastical with her photo collages, inspired by memories and emotions from her girlhood and constructed using family photos, film negatives, and transparencies.

These three photographers were selected from an applicant pool of more than 2,000, and their showcase promises to provide insights not only into their unique practice but also into the future of fine art photography. Developed: Three Emerging Photographers will be on view at United Photo Industries, 111 Front Street, Suite 204, from March 5 to 26, 2015. Join us for an Artist Reception on Thursday, March 5 from 6:00-9:00 PM. This show is presented by Feature Shoot with support from Squarespace, Ken Allen Studios, and United Photo Industries. We hope to see you there!