Delightful Photos of 1940s Celebrities Walking Their Dogs in NYC 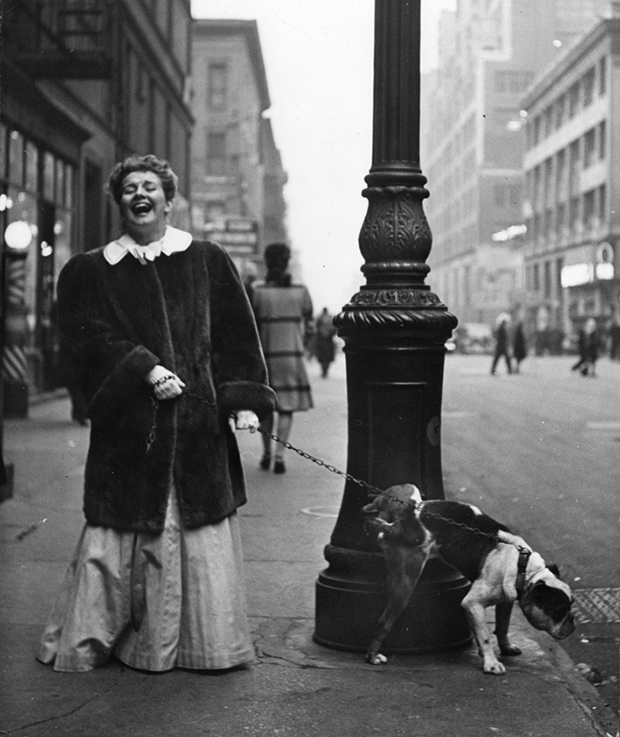 Actress Joan Roberts at Intermission from “Oklahoma” with Her English Bulldog “Goggles”, NYC, 1944 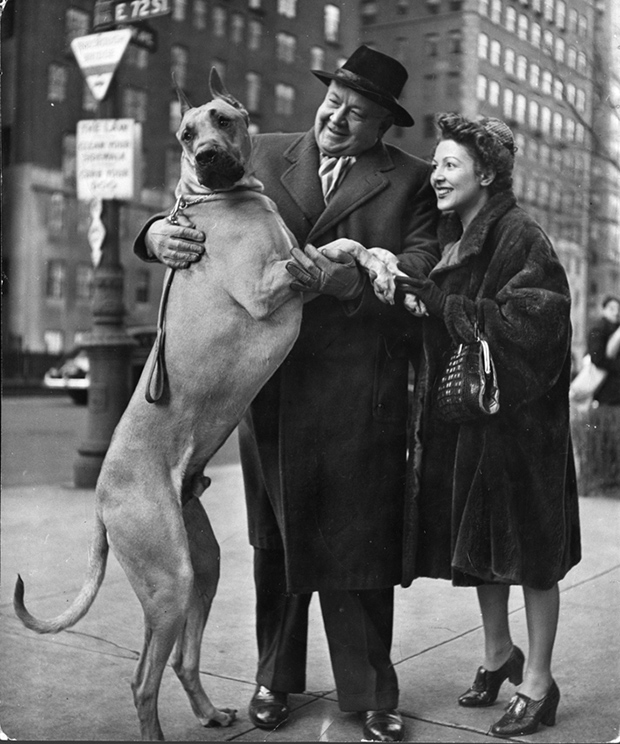 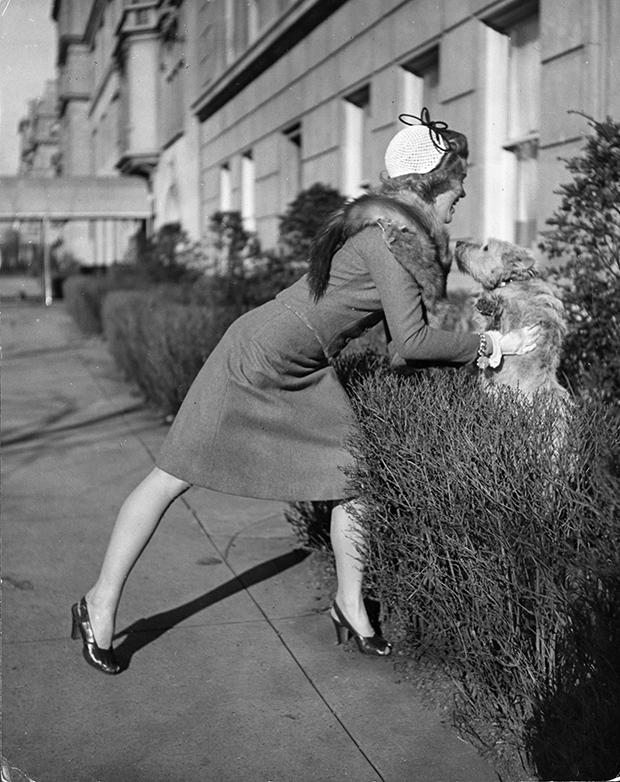 Actress Joan Caulfield lifting West Highland terrier Witty, out from behind a hedge, while trying to take him for a walk on the street, NYC, 1944

New Yorkers have always loved their dogs, and the 1940s was no exception. No matter how heavily scheduled a day might be, the city’s Broadway and film starlets, opera singers, and novelists paused to take time for their four-legged friends. For City Dogs, LIFE magazine contract photographer Nina Leen created a series of portraits of illustrious Manhattanite artists gallivanting throughout their city with their canine companions, capturing the ineffable ways in which dogs both large and small brighten even the most vital of neighborhoods. City Dogs will be on view at Daniel Cooney Fine Art beginning March 26, 2015.

Neen’s passion for animals both familiar and exotic ran deep, and no creature was as beloved as her own dog Lucky, who had been saved as a stray puppy by fellow photographer Leonard McCombe. Once McCombe rescued the dog, who had been abandoned in Texas, he delivered the pup home to LIFE headquarters, where Neen quickly feel in love with and adopted him. Over the course of her career and life, Lucky would grow to become her constant muse, starring in a book of photographs as well as a film.

For this 1944 assignment, the photographer sought out preeminent artists in the city to sit with their own cherished pooches. Although most were scheduled, gallerist Daniel Cooney suspects that some shots, like that of Joan Roberts and her companion Goggles, were more impromptu. Here, she touches on the array of emotions that dogs can set aglow within the human heart, and vice versa, from ecstasy to surprise, impatience to tenderness.

Throughout, she acknowledges both the seriousness and the whimsy of the bond between man and dog. When asked what he loves about the collection, Cooney says simply, “I love the joy and the humor in them. I love dogs and New York City. They are two of the biggest joys in my life.” 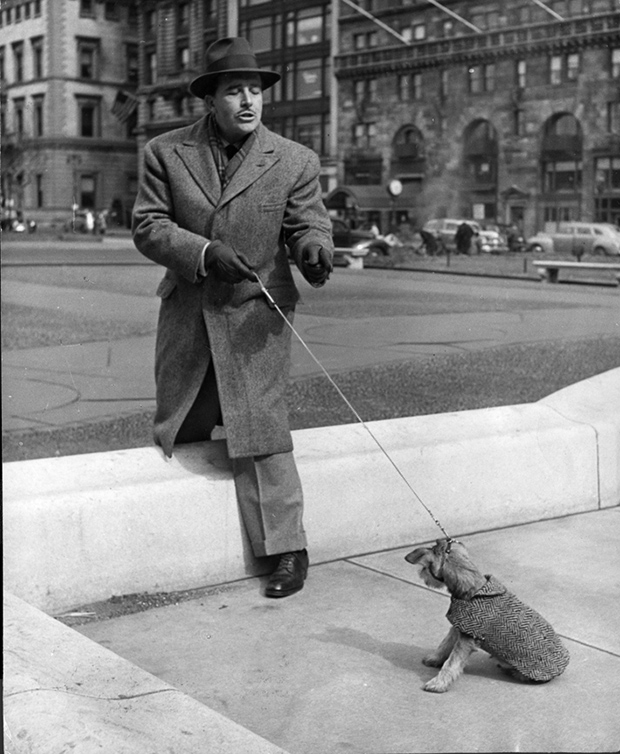 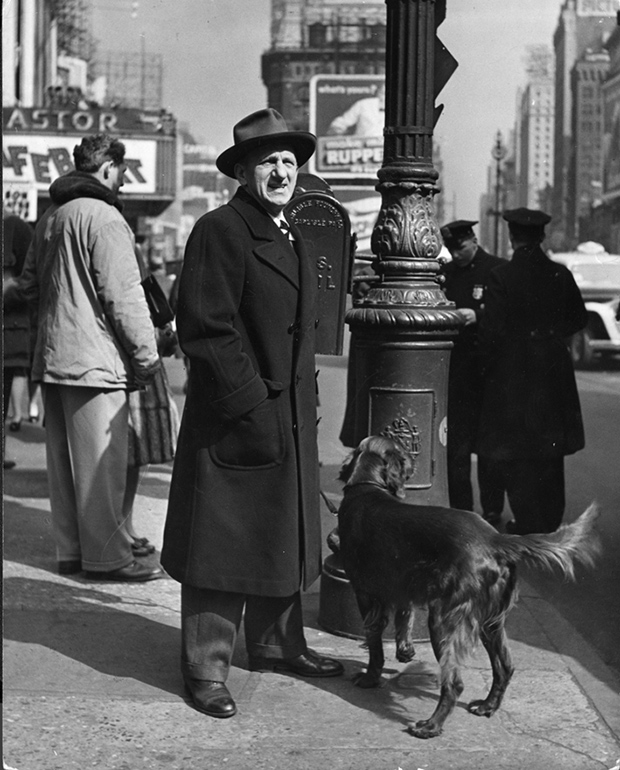 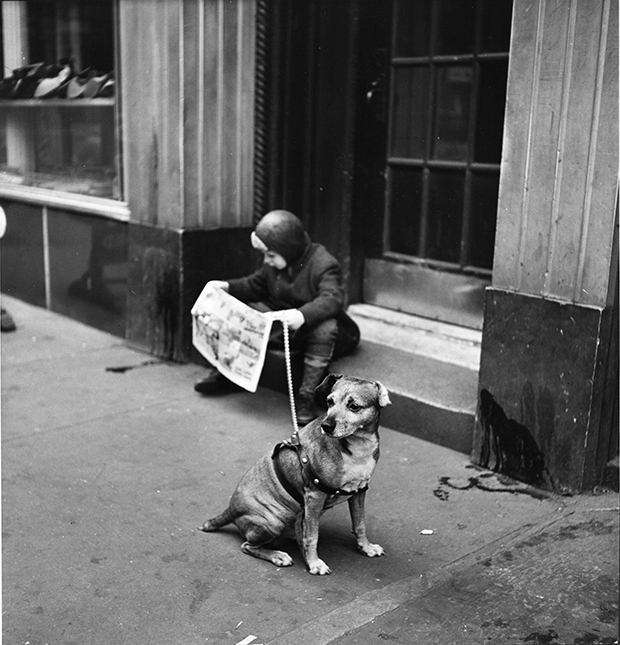 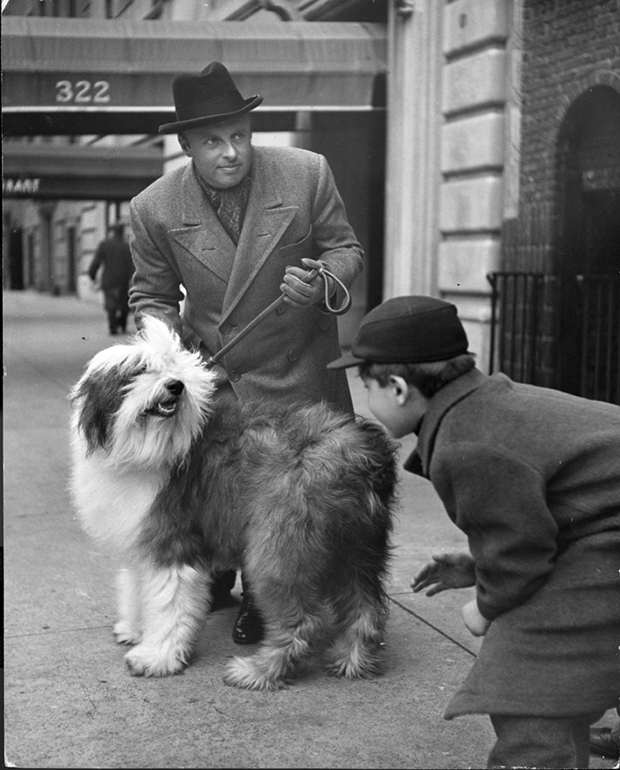 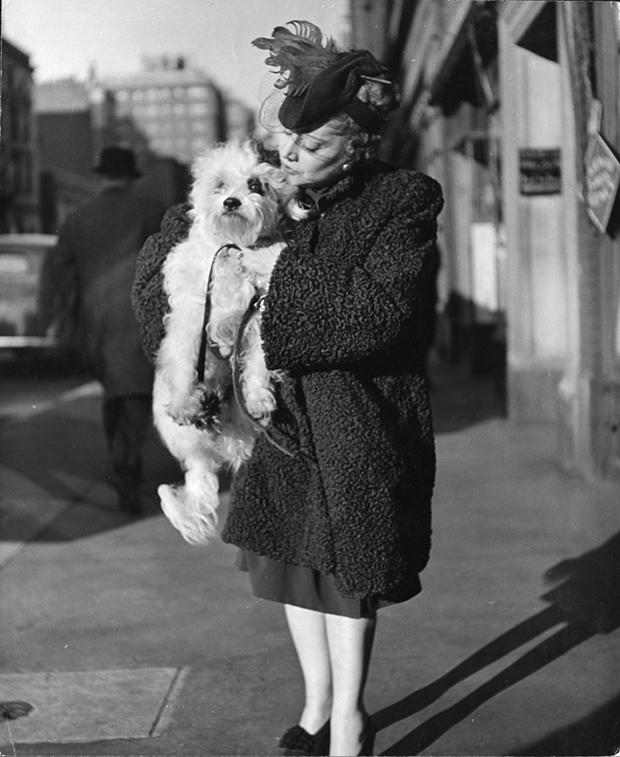 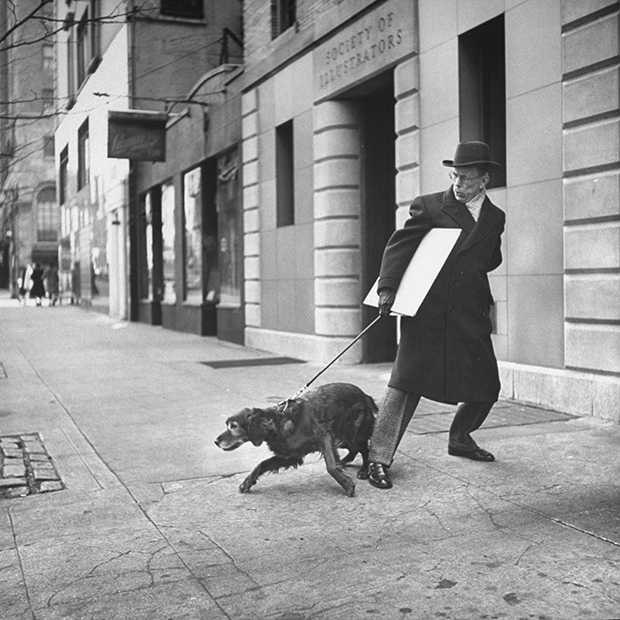 Artist Earle Winslow with Painting Under His Arm Struggling to Control His Irish Setter, 1944 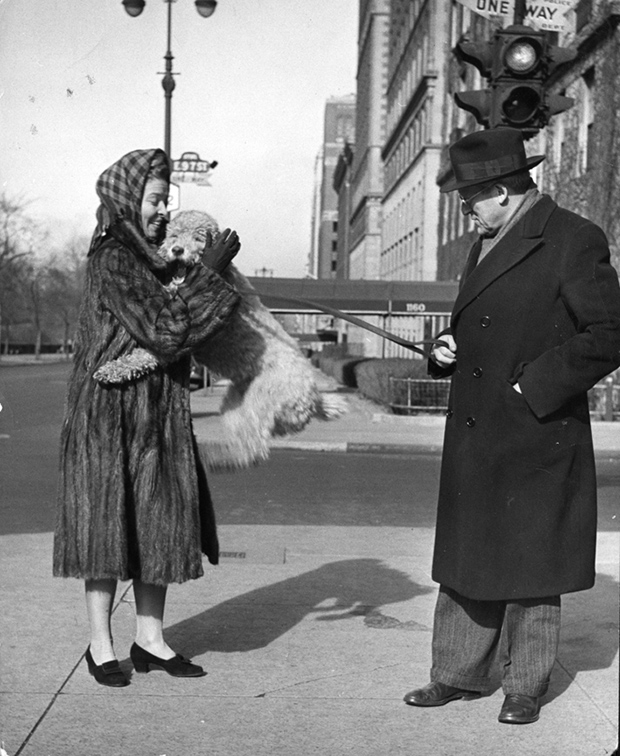 Conductor Artur Rodzinski Looks on Sternly as His Poodle Jumps Into the Arms of His Mink Coat Clad Wife’s Arms on 57th Street and Fifth Avenue, NYC, 1944 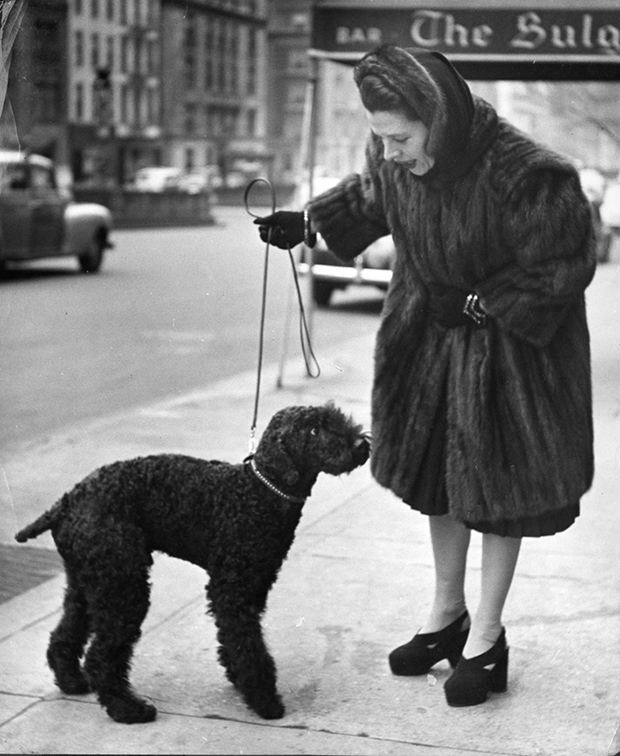 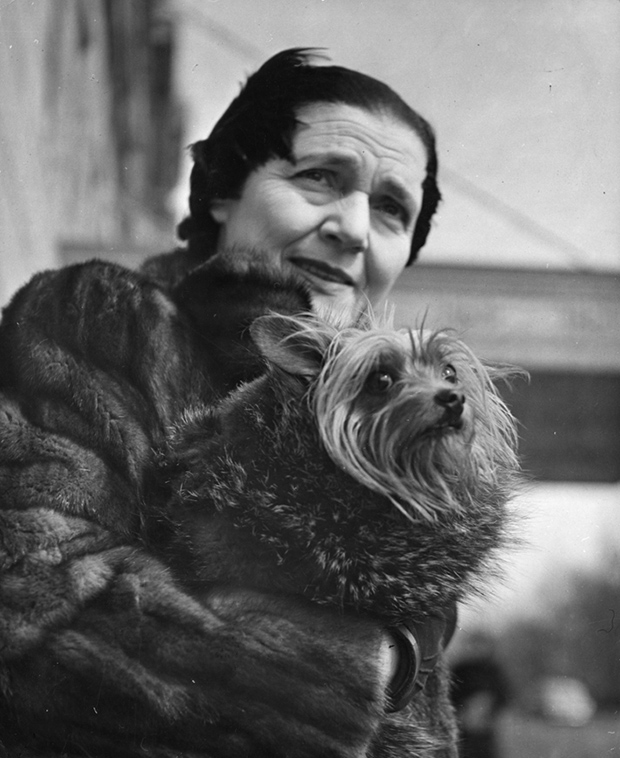